I had a few French bands picked out and was kind of tug of waring with myself as to what to feature this week. Then I happened to stumble across one of the prettiest voices I've heard in a long time.

He doesn't have any albums that I know of. Amanuael Visser was born in Ethiopia and was adopted and raised in Byron Bay. He sang from the moment his parents got him; when he was 18 months old.  Then when he was 10 he tried out for a talent show in Sydney.

He doesn't dance or write his own music, but man the boy can sing! I've never heard a little boy be able to belt out a Whitney Huston song and not miss a note!


Rolling in the Deep

Did I mention he sings opera to?

There is an article about Amanuael Visser here.
Posted by An Apel a Day at 6:30 AM 4 comments: 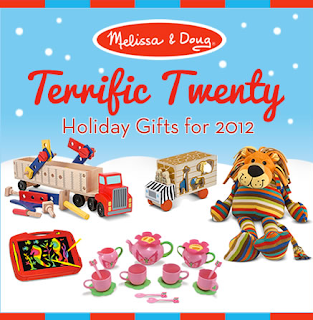 I love this time of year! I'm getting close to getting done with my holiday shopping. There's still a few things on the list to get. Mica keeps adding random things. I suppose next year I should hold off on the kids for awhile; to make sure I get them their last minute desires. ;)

Mica, Isaak and my nephew's Evan and Elijah would love their Scratch Art Portable Box! 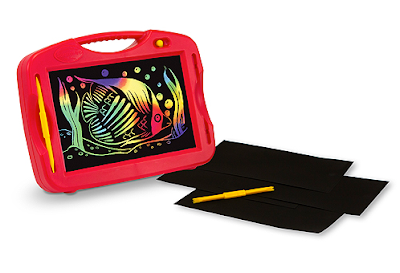 My nephew Emerson could use their Rattle Rumble Toddler Push Toy! 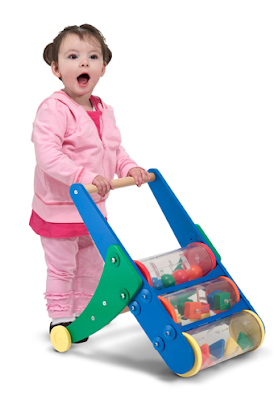 Right now you can check out Melissa and Doug's Facebook page to see their holiday favorites.

Now is your chance to win Scratch Art Portable Box! Lucky you!
a Rafflecopter giveaway
Disclaimer: The opinions on the post are my personal take on the product. This blog is a personal blog written and edited by me. I am not compensated to provide my opinion except for receiving the products themselves to test out. Melissa and Doug provided to me a free product to help with this giveaway.

The boys didn't want to take a bath. I know playing with Lego's is much more fun than bath time.

I had Daddy dig out the spa mat. I figured it would make bath time much more appealing. They loved it! Mica was first and he kept say, "Isaak come look at this thing!" Isaak said, "WOW I can't wait to take a bath now!"

I didn't get the camera out until Isaak jumped in. His expressions are priceless. 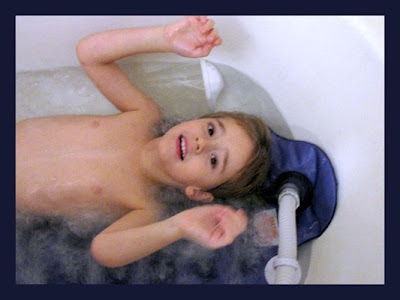 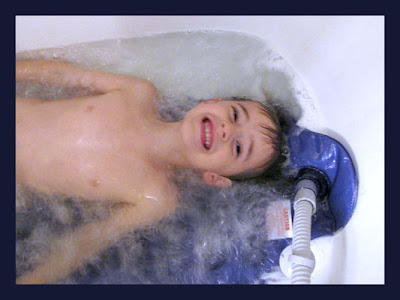 Ohhh those bubbles are powerful! 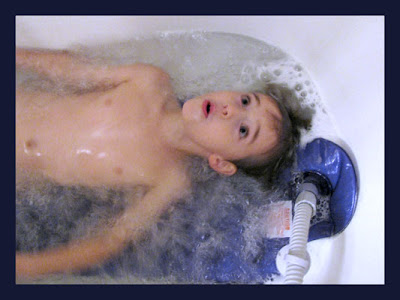 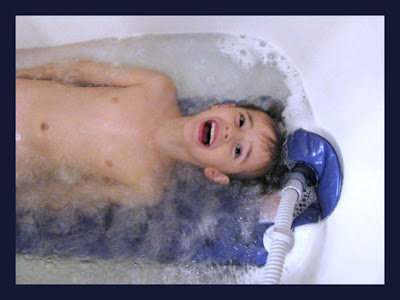 I joined Pinterest. If you follow me, I'll follow back. :)
If you have the time enter my low entry NuNaturals Flavored Stevia Liquids giveaway.
Posted by An Apel a Day at 4:00 PM 24 comments:

I took the day off today. Daddy had to go set up for an art exhibit.

Isaak's a grouch when he wakes up from his nap. Any time he has a break down it's right after nap time. Isaak and I walked Mica up to school. Towards the end of the day I bundled Isaak up like a brown bear. We were off to go pick up Mica. We were two houses down and he started crying because Daddy drives to pick up Mica, Mommy didn't drive. I walked. He cried and I'm sure the whole neighborhood heard him. The only way I could get the punk to stop crying was by telling him, "Listen when we get up to the school do you want everyone staring at us? They are going to stare at us if you are screaming like that." Then I tried to divert his attention to something else. I told him, "I don't know my ABC's can you help me?" I said them in all kind of mixed up orders and he was laughing at me. I was able to divert my stubborn child.

Tonight Daddy sat down after his road trip, and a used Kleenex was in his spot. Daddy said, "Who's is this?" It wasn't Mica's, it wasn't mine and I pretty much knew it was Isaak's. He claimed it wasn't his either. He flat out said, "It's not mine." Daddy said, "Isaak have you blown your nose anytime today?" Isaak said, "I blew my noses lots of times today." Yep Isaak much have more than one nose. ;) He went through the same questioning with the rest of us and Mica and I were like, "Nope." Daddy said, "You know what? I'm just going to throw this thing away. Try and not leave Kleenexes laying around." Isaak said giggling, "It's mine." It was as if he was playing us. Totally something I would have done. I don't know if it's lying or just being silly. He came clean right away afterward. He was giddy giggling about it.

The phone rang. We've gotten so many political calls. Everyone hears me bit** about the calls. Mica said, "I'll get it." Now usually he's really good on the phone. Tonight he answered it and said, "Hello". It was some kind of recording, so he hung up right away. He said, "I'm not going to talk to someone that won't tell me their name. I hate that." I just had a good laugh over that one.
Posted by An Apel a Day at 8:49 PM 5 comments:

Yesterday when I was making dinner Isaak wanted me to go on what he called a "Scappenger Hunt". Otherwise known as a Scavenger Hunt.

He said, "Mom I'm going to hide my toys like a scappenger hunt. Then you can find them!" He was all excited.


I finished my dinner duties and was off to find random toys. They were all in one spot; behind his bedroom door in a box. :)
Posted by An Apel a Day at 2:02 PM 7 comments: