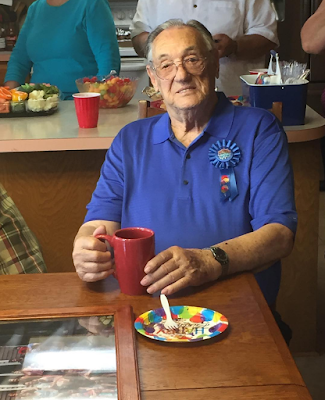 I took this week off. I wanted to get the painting I'm working on done. It's sitting here...facing the wall. My husband put it there. He said, "That's it you're starting something new." I just want to get the 1 painting done. I'm thinking he either does want me to get another painting going, or he thinks the painting I was working on sucks, and he wants me to move on. I was getting a little grumpy when I painted in a flower that didn't look right, and had to paint over it. Such is life.

Another thing on the list to get done this week was to use up my massage gift card that my husband got me for my birthday. It's just sitting there. To be honest I think it's creepy having a stranger touch all over me. Am I the only one that thinks that? I feel like I am.

He gave me a gift card to World Market, and I used that up the same weekend I got it. I actually got more than what was on the card. I love that store!

Part of me wants to regift the massage gift card. My husband's birthday is in August. He needed a huge cart to put tools in. I said, "Buy it! It's your birthday gift." I feel like saying, Since you don't really have a gift on your birthday use this...the massage card. His back hurts all the time. Mine on the other hand rarely does. When I get a massage from him it could be a 5 minute one, and I'd be happy. Longer than that I'm thinking, that's enough.

I don't mind when someone touches me. Like a pat on the back, or the shake of a hand. I just don't like long rub downs. I tried it years ago when he gave me another card. I went, got the full treatment, and left feeling like I was in a dream state. I couldn't tell if it was a yes that felt wonderful, or that was creepy, and I need to go to sleep now.

Do you like massages? Am I the only one that finds them to be creepy?

Email ThisBlogThis!Share to TwitterShare to FacebookShare to Pinterest
Labels: Back Massage, massage, Rub Down

I'm taking vacation time this week, and Travis is off on Mondays to work on sculpture.

Yesterday I was sitting on the couch in my living room. All the sudden I felt a jolt, and heard a boom. We don't have noticeable earthquakes in Nebraska. If I could imagine what an earthquake feels like, it was similar to that.

Travis was downstairs grinding with headphones on, so he didn't notice a thing.

I went outside to investigate, and noticed nothing. I even made Travis go up to check the roof. He only found a Nerf gun dart.

About a half an hour later I noticed a house blew up in Benson, not too far from me. Number wise the house was on 65th and I live on 76th. It dawned on me, My kids are at Benson Park for camp. My first instinct was to drive over there to see if they were ok. Travis said, "Don't be silly. They'd call us if anything were wrong." So I stayed in my house.

I saw on the news that houses by the one that blew up are unlivable. All those people were sitting outside on a hot day. I thought, Maybe I should do something for those people. Someone brought them water, and another person bought a boy sandals. He was running around barefoot because his shoes were in his house, which was destroyed. It looked as though they were being taken care of. My heart went out to them. I couldn't and can't shake the story from my head.


Before and After Found Here

My first thought was a possible meth lab. That thought disappeared when I found out that the house that blew up was vacant. There was only 1 person in that house, and that was a 30 year old lady that was inspecting it after a tenant was evicted. She was found under the rubble by her husband. Her injuries were so bad that she died. :( Another thought was a gas line, which they do have a gas leak, but that was due to the explosion. I keep wondering if this all has to do with the guy that was evicted. I'm not there, and it's all speculation. There is another adult and a 14 year old child that are at the hospital.

The whole area is taped off. The only people that can get on that street are people that live there. The homicide unit was there last night. Apparently they are called whenever someone dies. Firefighters put out the fire at the home next door that started last night. I just can't imagine being those neighbors, staying in a hotel because their homes are unlivable. Even worse yet the families that have loved ones in the hospital, or the family of the wife and mother that died. It breaks my heart!

When I went to pick up the boys they said the boys saw the explosion, heard it, and felt it. Their camp counselor was able to tell them what had happened from facebook.
Posted by An Apel a Day at 11:38 AM 8 comments:

I love the geometric pattern on it! I love it because it's artsy. I wore it to gallery openings.

In these photos I'm modeling the cover-up right by our corn, which has surpassed me in height. Yep we're turning into typical Nebraskan's, and have corn growing in our backyard. 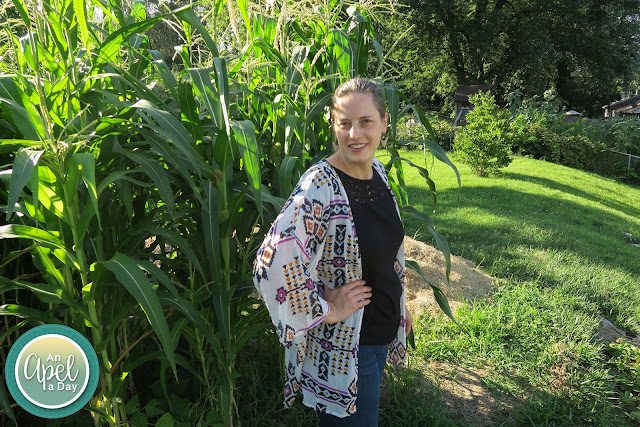 The cover-up is meant to go over swimwear. You can wear this to the beach, or to the pool. I like it with a solid shirt and jeans. It's very versatile in my opinion. 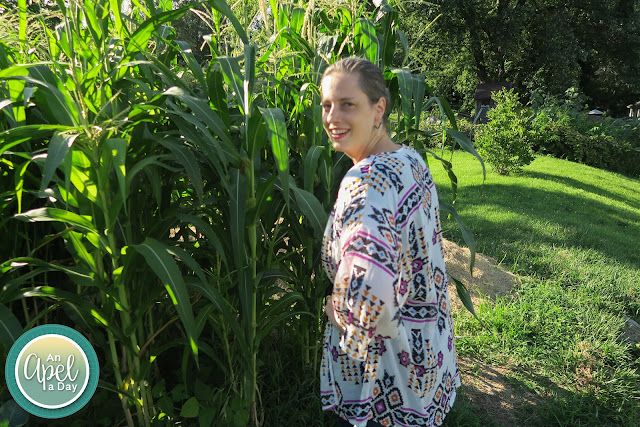 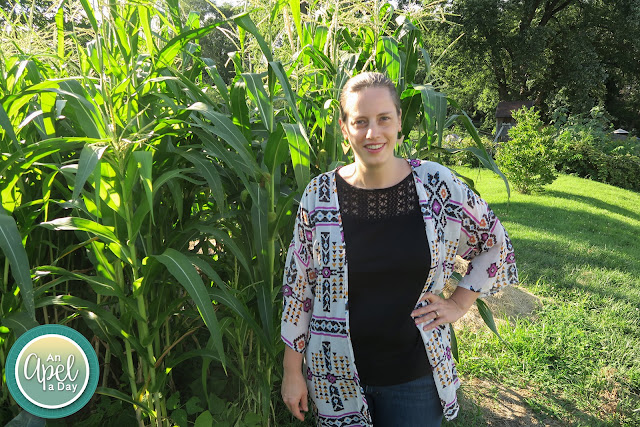 The model wasn't wearing it with a suit either. 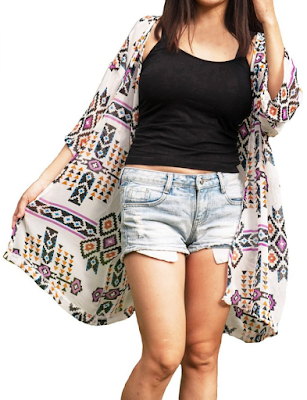 Here's a close-up of the geometric pattern. I have the perfect triangle earrings to wear with it. 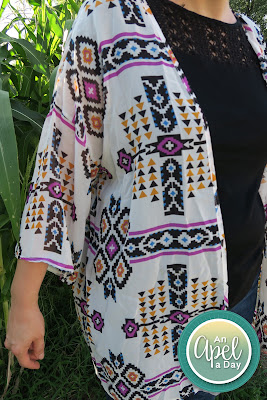 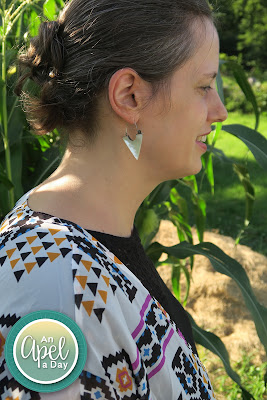 It's 100% polyester. Wash it by hand, and wring it out, and hand it up to dry. It dries super fast because the fabric is light weight.

It's one size fits most. I'm a large, and it fits me perfectly.

Would you wear this with jeans like me, or as a swimwear cover-up? Maybe I'll wear it as both.

Disclaimer: I received this product for a discount in exchange for an honest review. The opinions on this blog are my own.
Posted by An Apel a Day at 11:36 AM 5 comments: