I happened on this next band by accident. I was looking up music for my Color and Design Theory Class. They do an exercise when I give them a kind of music style or dance move. Then they have an hour to do a small piece reflecting that with line. For some students it's too open ended, while others really enjoy it. Usually I'm much more specific in what I want with full blown assignments. Examples might be to use soft swirly lines to depict ballet, or hard, sharp and repetitive lines for rap. I was looking up examples for Indie music.

I really like this company called Spurifyourself. They have a groups of music that fits well together. They are based in Montreal. I really like listening to it because it has variety, but similar enough songs. I'll be listening to to music on this site more!

One artist that I found is: José Gonzalèz. He is a Swedish indie folk singer-songwriter and guitarist.

His newest album is his first in seven years was produced by González in his home as well in Sweden. It consists of years’ worth of musical sketches that in other hands might naturally sprawl wildly in sound and style, but on Vestiges & Claws González has created a collection of songs that cohere just about perfectly, ensuring his position as one of the most important artists of his generation.


Leaf Off / The Cave


My Dad told me a story about a squirrel once. The mom that raised him kept feeding one. One weekend she went out of town. The squirrel wasn't being fed, so it started scratching and biting holes in their door. My Grandpa said, "Go get your shot gun. Don't tell your Mother!" Ever since them I haven't pictured squirrels as cute.

Last week on Friday Mica had 3 friends over to study lemurs. They have their pop quiz this week, and they go to the zoo to study them. I checked out a lot of books on lemurs from the library, and got a lemur movie.

Of course  Morgan Freeman was the narrator.

The kids were all given a PowerPoint, and study guide to go over as well.

Kid number 1 walked in the door. He was wondering why we have bones all over our front porch. Hummm....Halloween.

Kid number 2 came to the door with a bag of food. She's a super picky eater. She can't have red sauce, or many fruits because of her acid reflex.

Kid number 3 came to the door. Her mom was annoyed because arrangements were made with her father. She's divorced. She didn't know about the event until last minute. Nor did she know about the time it started.

My husband held up the event. Let's just say he's a wonderful Dad! He just should have communicated to kid number 3's mom better. It's not his fault. He pretty much had the other kids all day because their parents had to work.

Isaak's friend called and he wanted to come over. Kid number 4 showed up. It was good because little brothers can be in the way at times. Thankfully they played video games, did artsy things with his scratch board and played with his Thomas trains stuff quietly in his room.

Lunch time was coming soon. I bought pizzas, brats, there were raw veggies, and fruit. There was soda as a choice. We won that at the Fall Festival. It's not something I buy regularly.

We never heard that one before. Muslims not eating pork, we've heard of. Travis offered him leftovers: A beef brisket. He was happy with that.

Kid number 2: I can't have red sauce if you're serving pizza. I don't drink soda.

No worries I bought an alfredo sauce pizza because I knew she couldn't have red sauce, since she was at Mica's birthday party. Travis made her pizza, she took 2 bites of 1 piece and didn't eat anymore.

Email ThisBlogThis!Share to TwitterShare to FacebookShare to Pinterest
Labels: get together, Lemurs, play date, Science

I've been hit hard with spam this week. One older post got hit. I set it to draft. Then my new post got hit. We're talking 1,000s of comments.

My comments are set to moderation + get sent to my email, so I can approve them. There has been a ton of deleting from me. It's so annoying!

To think of how many other things I could have been doing...while deleting spam!

The boys made candy boxes at the Lowes Clinic a few weeks ago. I asked them if they'd like goggles? They work great for when they help me when I suck up leaves out of our driveway.

They both got some. They had some spooky accessories for their goggles. Isaak picked out a black cat accessory. 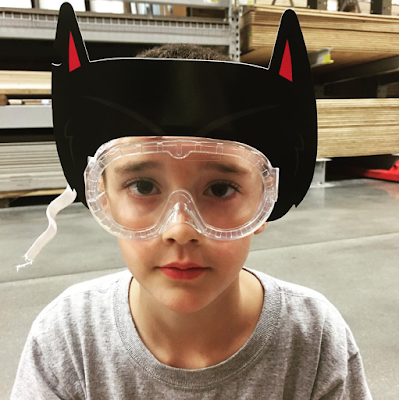 Mica didn't want an accessory. He jumped right into building his candy house.

Then I heard giggles. Mica made his black cat farting out green slime. He thought that was the funniest thing ever. 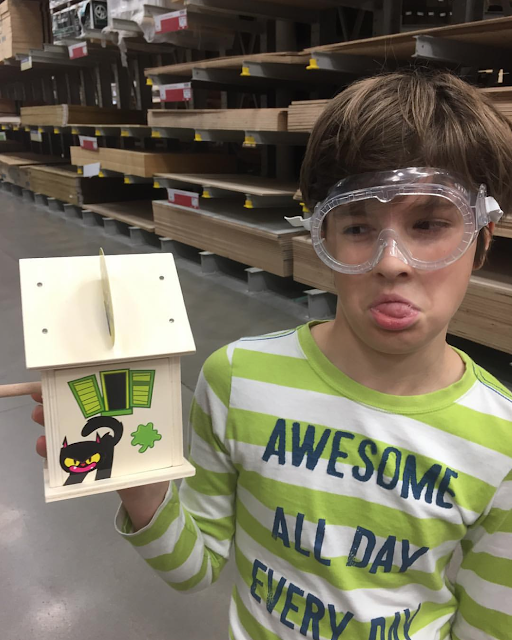 Here's the candy box they created. Maybe it's a birdhouse. My boys are filling it with candy. 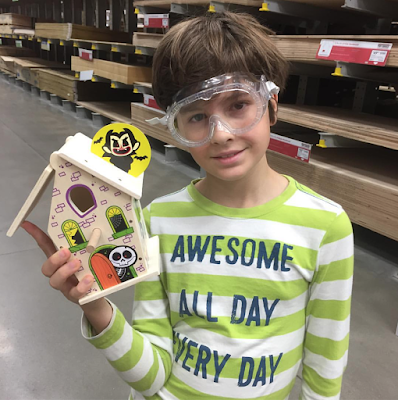 This weekend we ran some errands. I parked the car, looked back, and there was Mica reading his book with his hardware goggles on. Never mind the fact that he has 2 pair of sunglasses back there. 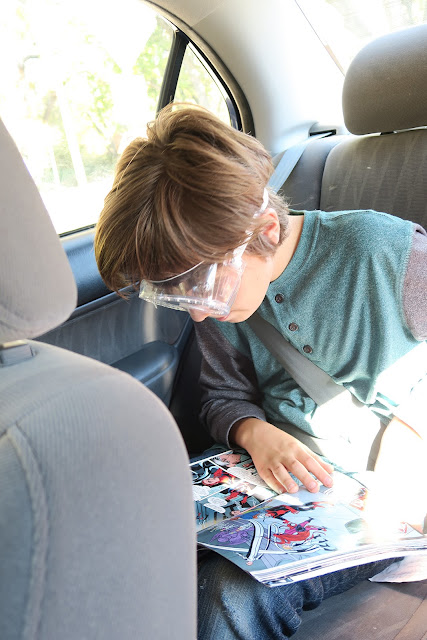 Do You Believe in Bad Things Happening in 3's?

My husband and I disagree when it comes to some things. I believe in ghosts, angels, afterlife, karma, and bad things happening in 3's. I even think it's possible to be reincarnated. Can you be a Christian and believe in reincarnation? According to my old pastor, the answer would be, "No." Ya he wasn't too happy about me asking about reincarnation during confirmation. My mistake. I thought confirmation was about learning about your religion. My argument is, God can take and put a new breath of life into each of us, and put us down her as something new. There have been so many people that have dreams, or visions about being someone else. Who am I to judge them, and say they are wrong? It's a possibility. One person's interpretation of a book like the Bible is different from the next person's interpretation. There are a lot of other religious books out there that existed around, before and after the Bible to.

Last week I found out my Mom's cousin passed away. She was a single lady who showed up to many of our family gatherings. We have a small family overall. I only have 6 first cousins on my Mom's side, and none on my Dad's. My Mom's side of the family gets together for all major holidays, my inner family gathers for all birthdays, and we have a family reunion once a year. My Mom's cousin liked and commented on my facebook posts daily. She was a school teacher, and was liked by many! Her death was sudden. All we know is that she was sick with the flu.

My Aunts have been over at her apartment cleaning all weekend. They found a box filled with thank you notes from her students.

This weekend I found out my Mom's cousin's son passed away. It's a different cousin. He was only in his 40s. He was a Navy Seal, so fit as a fiddle! He was up training on a mountain. They were driving back down. He was in a jeep, someone was driving behind him. All the sudden they noticed he was hunched over, and was driving off the road. The driver behind him put his car in park, and tried running towards his vehicle, but there was no saving him. He left behind a wife, and a son that is a college freshmen.

The funerals are about the same time, in different states. So some can't go to one when they'd like to. :(

Yesterday my Grandpa was lead out of church because he didn't feel well. Thankfully he's ok.

I'm just hoping that this bad things happen in 3's is just a saying. Are you superstitious like me?
Posted by An Apel a Day at 9:54 AM 6 comments:

My kids love to build with things. It started when they were little. Mica loved puzzles, then it moved to Thomas, Polar Express and Team GeoTrax train tracks, then it was CitiBlocs and Twig Building Blocks, and now it's Legos. I just got Brick Genius to review. They are a company that has 1000 building bricks to construct whatever creative minds come up with. 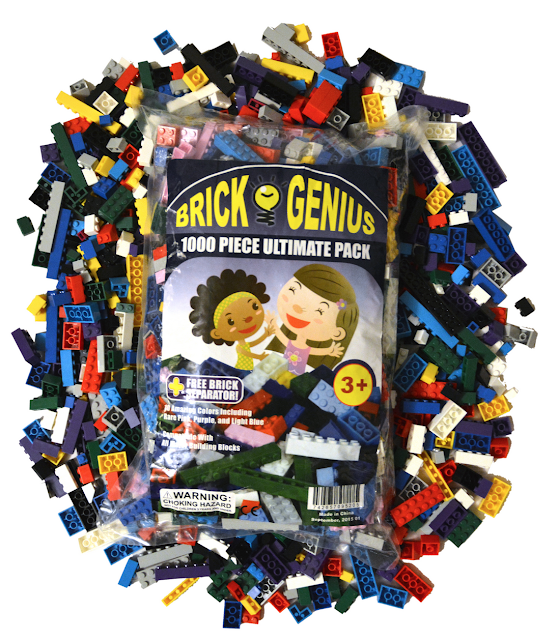 What I love about Brick Genius is the color variety that they have! They have colors that many Lego sets do not have in a variety set: Yellow, Green, Light Blue, Dark Blue, Purple, Red, Pink, White, Grey and Black. I hardly see the slightly different blues, pink, purple and grey in the Lego sets. 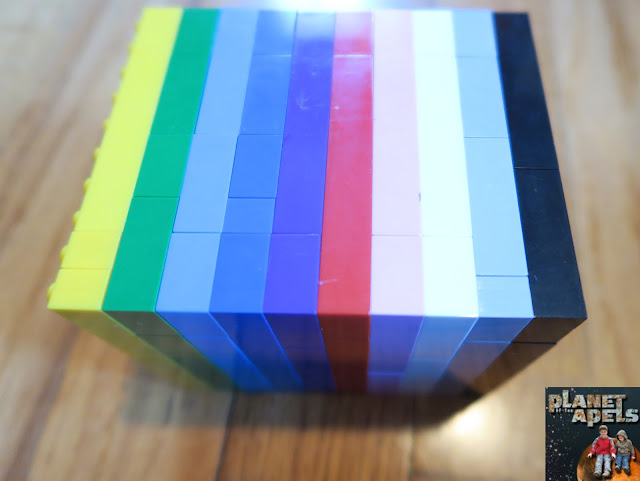 Brick Genius is not affiliated, but are compatible with Legos. They will work with all our other sets. 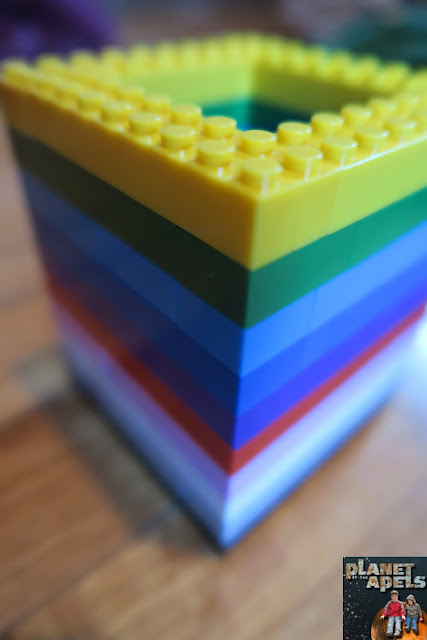 The cost like any brick building set isn't cheap. It's $79.99, but on sale for $36. That's a $43 savings! You get 1000 bricks: 60 roof pieces, a free brick separator, and lots of bricks! I dislike that the bricks are made in China. Most things are made in China now a days. I love that they fill up the bag, so there is no package waist. It would be nice for beginners to have a case. It comes in a disposable bag. We have bins for this kind of stuff, so that's not a problem for us. 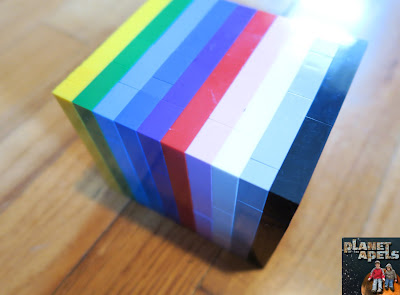 I have not given this set to my boys yet. I have however played with them myself. :) I plan on creating little constructions with the Elf on the Shelf. Soon enough our Elf Brita will have a couch, a bed, and more. Then the boys can keep the bricks.

This set doesn't come with instructions to build this or that. I kind of like that you can let your imagination take over to create whatever you want. 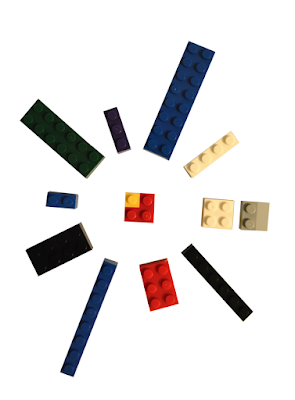 It's for ages 3 and up. To me the age always depended on if they put things in their mouth, or not. Mica was able to play with this type of toy at age 3, and Isaak was 4 before he could without supervision.

Disclaimer: I received one or more of the products mentioned above for a discounted price in exchange for a review. Regardless, I only recommend products or services I use personally and believe will be good for my readers.