Isaak's always had big eye's and eyelashes. Grandma Apel calls them, "Soulful eyes." I've heard other people say that he has, "Cartoon eyes." Even Daddy and I have called his eyes, "Cartoon eyes" before. We didn't say that to be mean. He just has big pretty eyes.

We have another nick name for Isaak besides Zeek. Daddy's always called him Baby I's or Baby Eye's. 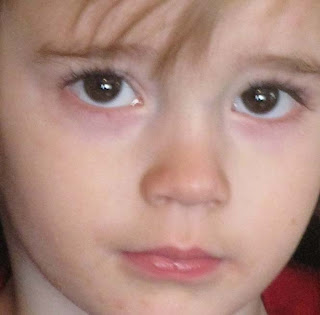 The other night I was tucking Isaak into bed and he said to me, "Mommy I have cartoon in my eyes." I said, "Isaak you don't have cartoon in your eyes. You just have big eyes, which are like the eyes in cartoon characters." Probably a little much for a three year old to understand.
Posted by An Apel a Day at 8:55 AM 3 comments:

I started thinking about the odd things I like and don't like today at work. If you've seen the movie Amalie, my thoughts were kind of like that. They introduce each character with odd quarks that they have. By the way, that has to be one of my most favorite movies ever! I'm going to list four of each.

I forgot it is Wednesday! I'm so thrown off with Memorial Day stuck in there.

I took photo's of our bear family {except Daddy who wouldn't try the bear hat on}. Such a poor sport! I needed a Papa Bear to make this post complete!

Mica Bear - He poses so good for me. An ideal model! 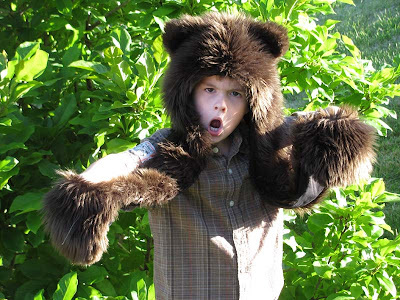 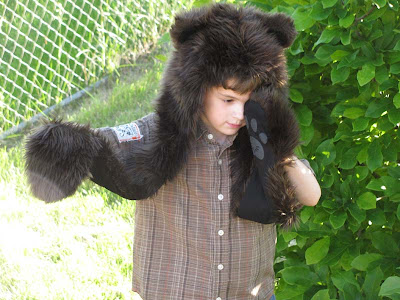 Isaak Bear - He didn't want to participate. He was too busy running around the backyard, playing tag. I did get one photo out of him. 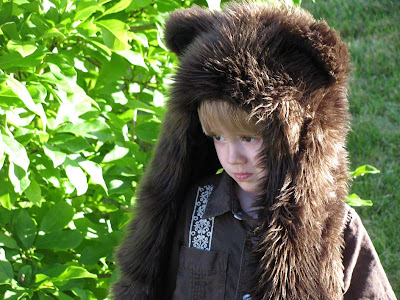 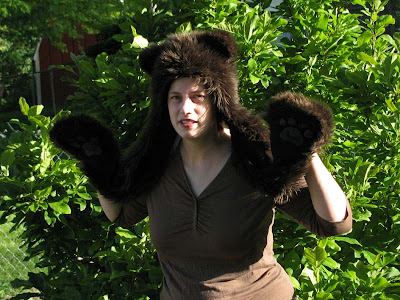 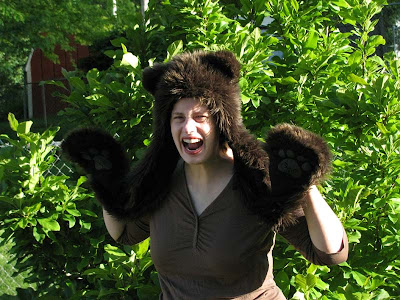 You can get these hats and more on Spirit Hoods! I think they are so fun and cute! They can be used for Halloween, dress-up and winter time!
Posted by An Apel a Day at 12:37 AM 17 comments:

I was really excited that Gumpylump gave me a Melissa and Doug Shopping Cart and Slice and Bake Cookies to review!

Isaak tested these products out. He got the Shopping Cart for his birthday from us. Gummylump has the Melissa and Doug Shopping Cart on sale for $55.99 right now. It's original price is $69.99.

It literally took Daddy only 7 minutes to set up! He had no problems. 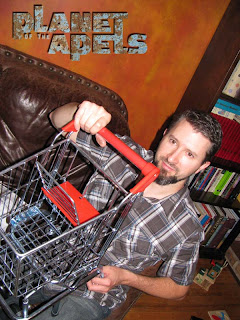 Isaak wanted to get a doll and play food to put in it right away. 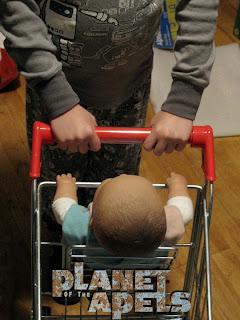 We took him to Whole Foods a few days later. Isaak did much of our shopping! He was so entertained with having his own cart. Usually I'm saying, "Isaak stay with me!" or "Isaak if you can't stop running, I'll have to put you in the cart {my cart}." He also offers to help me push my cart, which takes forever. I love that he now has his own cart. He kept up with us. Most importantly he was happy the whole time. This cart made our shopping experience much more enjoyable! 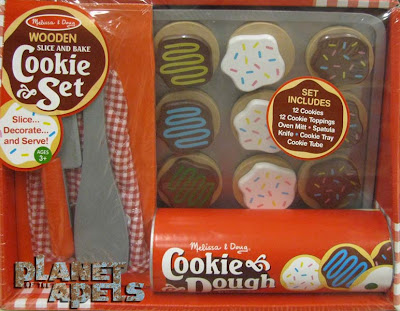 I had to take a picture of the set all packaged up! It super cute! 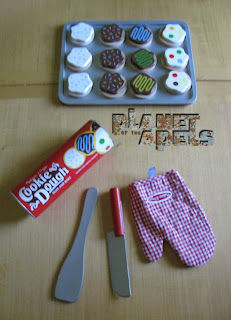 It comes with the works. Maybe it could come with some Olive Oil spray ;). It has a pan, 12 cookies, cookie dough container, spatula, knife and oven mit. 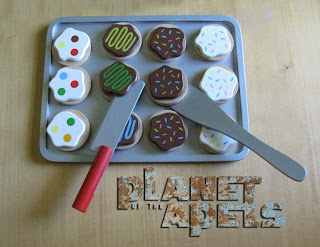 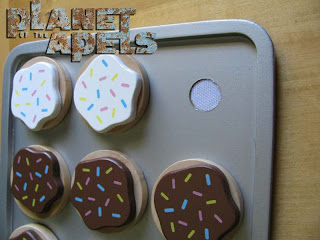 The opinions on this post are my personal take on the products. This blog is a personal blog written and edited by me. I am not compensated to provide my opinion except for receiving the products themselves to test out. Gummylump provided me with a free sample of this product to review, and I was under no obligation to review it if I so choose. Nor was I under any obligation to write a positive review or sponsor a product giveaway in return for the free product.

If you have questions about this post please contact me at: alissa4illustration@hotmail.com
Posted by An Apel a Day at 11:16 PM No comments:

Mica made sure that we hung a birthday banner up. Luckily I had one stuffed up with the party stuff. I had no time to make one! It's funny how kid's priorities are different from our's. I was all about clean and prepare. Mica was all about, decorating. ;)

The boy's were both super excited the moment our first guest's Great Grandma and Great Grandpa Kent walked through the door. They both had to show off their rooms and favorite toys. Poor Grandma just didn't understand where they were leading her. She has Alzheimer's disease. I was actually surprised that Grandpa brought her over. I guess she was trying to follow Grandpa out of her home. He decided to take her over. She did pretty good! Isaak was like, "Come on Grandma!" He took his little hand, grabbed her's bigger hand and he lead her off to his bedroom. If I wasn't so busy, I would have thought about snapping a picture of Isaak holding her hand. It happened so quick, but was super cute!

More and more guests arrived. We had 9 adults, 2 older kiddo's and 4 little kiddo's.

Dinner went by really smooth. I had as much prep work done as possible, which was great! I made hamburgers: I add feta cheese, chopped green onions, chopped white onions, chopped tomato, ground oat meal, Worcestershire sauce and an egg to help hold it all together. I think I added too much Worcestershire sauce, but everyone seemed to like it! Aunt Angela even took one home to Uncle Eric who was unable to attend. Aunt Terra brought sausages, which were yummy too! For sides Grandma Spiehs made baked beans that I love, Aunt Angela brought different types of dip and chips {yummy}, we had watermelon, cantaloupe, fresh green beans and Couscous Salad.

The little boy's ate in Mica's room. I made sure they got a little of everything. When I went to check on them it was comical! There was splatters of lemonade on the floor. What I was laughing at the most was how one single plate had a big pile of green beans on it. They must have all decided that the green beans were not their top choice of things to eat, so they piled them on one plate. Later on I was teasing them that they couldn't have cake because of how they all decided to waste their green beans! They sort of looked at each other trying to decide if I was serious or not! 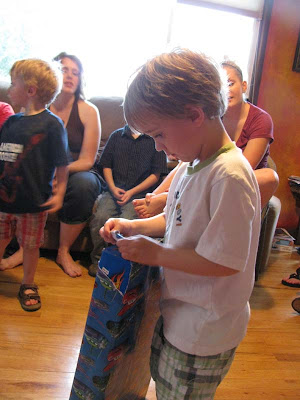 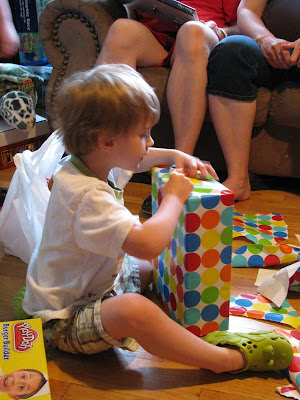 
At the end of the video was Isaak's head bumping into the camera. He didn't even flinch. Almost every time the track got done Isaak would say, "That's cool!" Every time I video tapes it, Isaak wouldn't say it. :( One time a car got stuck and Mica said, "Well that was lame." We were laughing. They played with the Hot Wheel track until 9 pm, an hour past their bedtime.

Isaak was really confused how the whole method of unwrapping gifts went. Here's he's asking Daddy, "Why is Evan opening a gift? I thought it was my turn?" We kept flip flopping to give them each a turn. Some people gave the boy's more then one thing to unwrap.  Isaak looked concerned. Like he was being gypped. 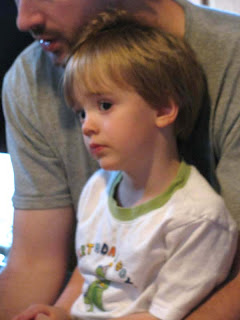 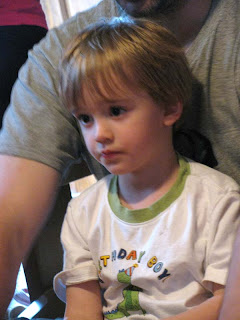 Isaak also got a Melissa and Doug cookie and ice cream cone set from Aunt Terra, more Hot Wheels cars and extra track from Grandma and Grandpa Spiehs, sweet Play-Doh sets from Aunt Angela and money from Great Aunt Becky that was unable to attend and Great Grandma and Grandpa Kent. I used some money to buy a Slip 'n Slide that the boy's love!

I gave Evan a puzzle from Melissa and Doug that said the capitals as you put the pieces in. For the record I felt bad because their was two Wyoming's! Not something I would have even thought to check!

Aunt Terra brought some, we made some, so we had a lot of dessert.

I made a gigantic chocolate chip cookie on a flat pan, and a sphere cake that we decided to leave in two halves. You can see more pictures of this cake on my Cookie Art blog.  Our theme was space, so I wanted to make a planet cake. We decided on earth. I made the cake, frosted the blue and Daddy frosted the details in. He's much better with 3D and geography then I am! 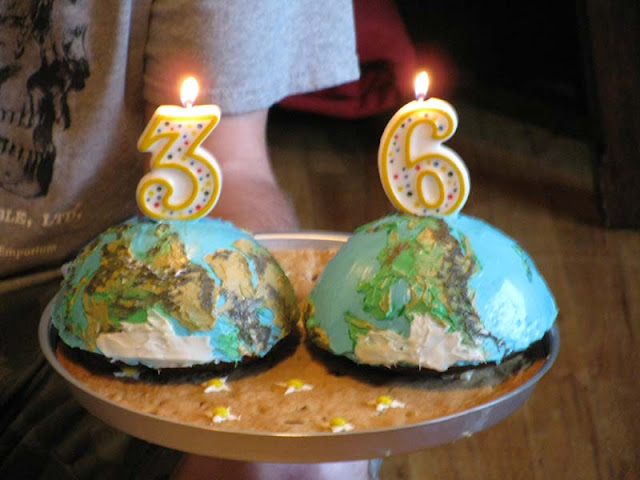 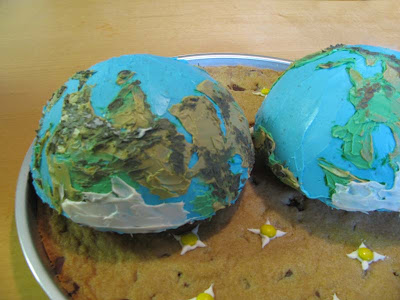 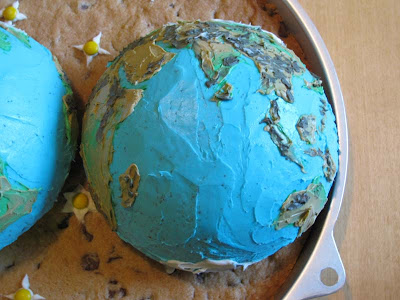 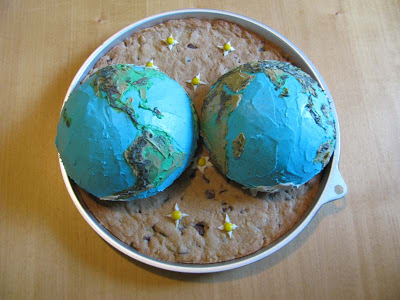 I wanted to wish all of my readers a very happy Memorial Day.

I have one student that is in Afghanistan. I hope he returns safely, along with many other troops. 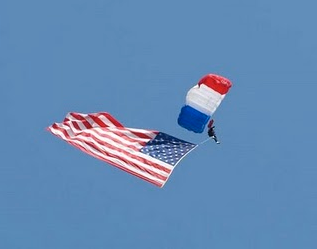 Plans for today: We're celebrating our nephew Evan's 6th birthday! I bought him a Melissa and Doug puzzle of the United States. How fitting for today. It says the state and capital as you put each piece in. Then we're also celebrating Isaak's 3rd birthday with my side of the family.

We're grilling out and I have to work on the cake. Whole Foods had a major sale on all their Santa Cruz organic 32 ounce lemonade's - 5 for $5! Then I made a Couscous Salad, friend's recipe I wrote down here. I'm making a cake that looks like a globe. Finger's crossed that it works out ok!
Posted by An Apel a Day at 6:56 AM 2 comments: