A new band I discovered just this week is called Mumford and Sons.

It's nice to the ears. They are an English folk rock band. They've been featured on Saturday Night Live. The biggest news is that they have agreed to pair up with Emmy Lou Harris for a concert. I saw her when I lived in Savannah, Georgia. She is wonderful!

It Took Him Four Years

Earlier this week I said, "Travis can you trim Isaak's toe nails?" He hesitated like he didn't want to do it and then said, "Ok."

I then heard him say, "He has my toenails. I really should be the one that trims them. I can't see anyone else trimming my toe nails, so I should trim them."

I burst out laughing because he's just now realizing that Isaak has his toe nails. Isaak's 4 year old.

I had to repost this video of little Isaak man that I found today:


It was taken back when it was ok for him to run around in the nude.
Posted by An Apel a Day at 7:50 PM 7 comments:

Old Micker Donald Had a Farm

It must have been farm week at school.

Isaak made a horse at preschool. 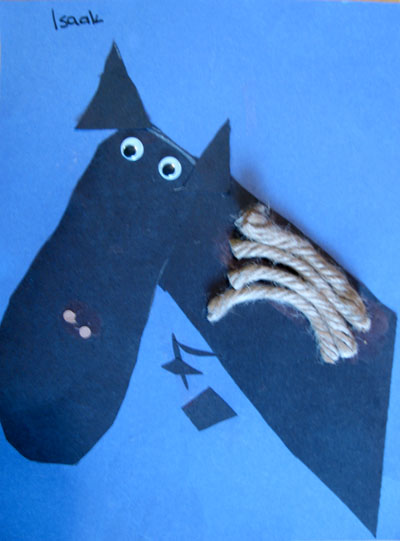 Mica made a  farm picture in first grade. 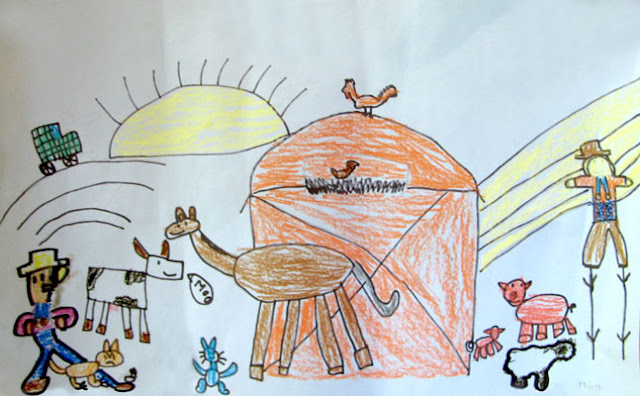 He's kind of in this stage where he thinks he needs to add everything he can think of.

This was my favorite part of his picture:

Yesterday We Had to Get Out of the Pool

Isaak and I went to go swimming at the Y last night. Isaak was throwing a ball back and forth with me. Then he accidentally hit a guy in the head with the ball.

The poor guy had a look of slight anguish on his face.

I know Isaak didn't mean to hit the guy. He just doesn't have very good aim.

I said, "Isaak you need to apologize."

I said, "Isaak I know you didn't mean to hit him in the head with the ball, but you still need to apologize."

I said, "Isaak if you don't apologize we are getting out of the pool."

I apologized to the guy and his father. Did I mention that the guy is mentally challenged. That made the situation harder for me. Harder to communicate, harder for him to understand that a 4 year old didn't mean to hit him.

Then we got out.

I explained to Isaak that we didn't get out because he accidentally hit the guy in the head with a ball. We got out because he refused to apologize. I went on to say, "You have to apologize if you hurt someone; even if you didn't mean to hurt them."

I know Isaak is shy when it comes to strangers. He's the type of kid that doesn't want to play on the playground if he doesn't know anyone else playing.
Posted by An Apel a Day at 8:39 AM 3 comments:

The boys saw gourds in the grocery store and had to have them.

They pretended they were microphones and telephones. They are just plain silly!

I wanted to put their gourds in a bowl in the living room. NOPE, the gourds are theirs. They picked them out, so they belong in their bedrooms. Silly kids. 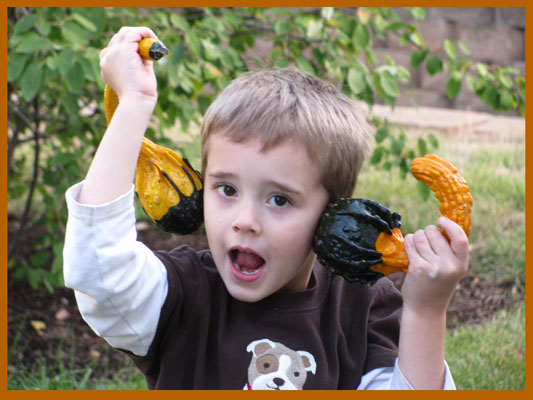 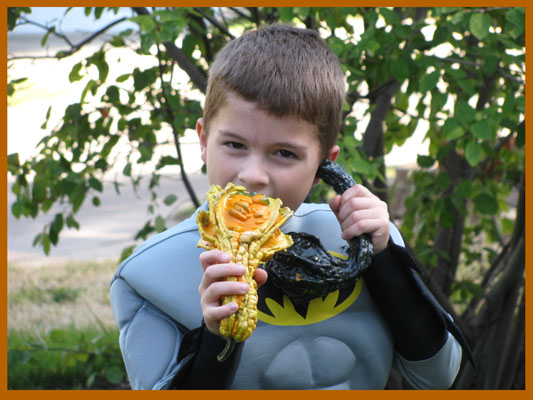 I know Isaak has his eyes half open in the image below. We were all laughing at this shot. I had to post it. 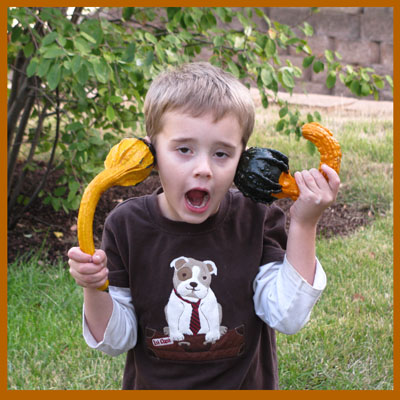 I think these glasses are cute. I even thought they were fun enough for my WW. Daddy thinks they are ugly. They are, but in a cute sort of way. Isaak was really proud of his cute/ugly glasses. 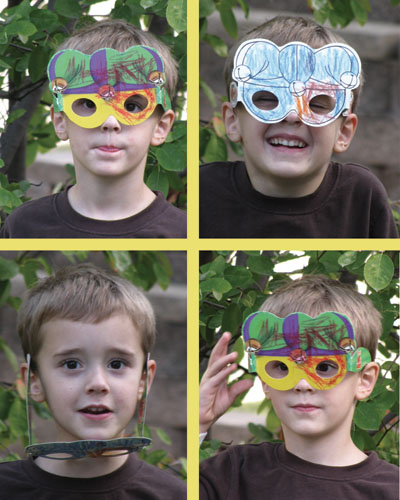 Oh how I love the CDs that Rockabye Baby! has to offer. 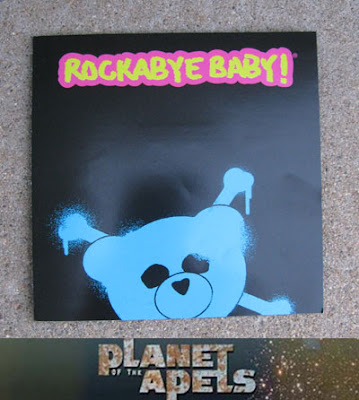 They take well known bands and turn their songs into lullabies.

I  was lucky enough to review their latest greatest that comes out tomorrow: Rockabye Baby! Lullaby Renditions of Prince. You can purchase the CD for $16.98. 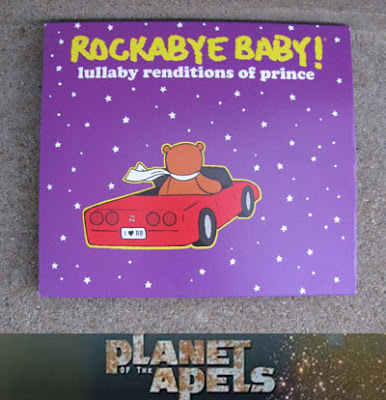 We've been long time lovers of Prince. My older sister had one of his cassette tapes back in the day. My husband and I listened to him a lot in our college years as well.

Last night I popped this CD in, while I made dinner. The CD is relaxing, yet familiar. My favorite rendition is Raspberry Beret. You can hear music clips on their website here.

I simply love all the illustrations on Rockabye Baby! They are very consistent with their look. 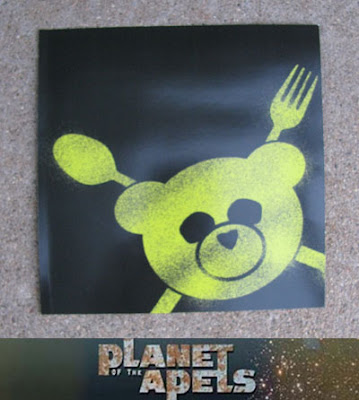 They even have an apparel line that has onesies, t-shirts for both babies and adults. There is activities for older kids on the inside of the CD. 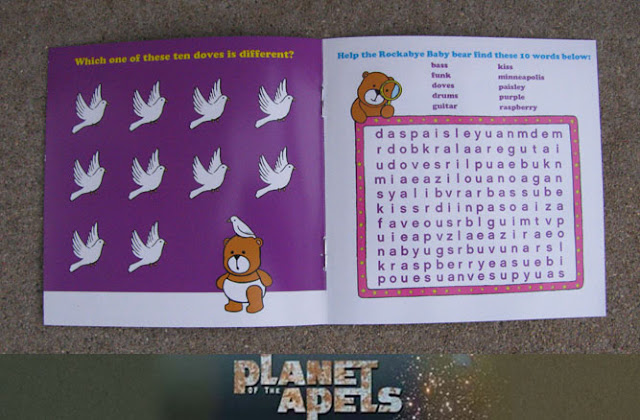 They don't have Prince on YouTube yet, but here's a Beatles clip. Again if you want to hear Prince, go here.


A handful of their other albums include:

Check out their blog here. They have a lot of helpful posts. One of their recent posts, is a baby shower game.


Disclaimer: The opinions on the post are my personal take on the product. This blog is a personal blog written and edited by me. I am not compensated to provide my opinion except for receiving the products themselves to test out. I received a CD of Rockaby Baby! Lullaby Renditions of Prince to help with this review/giveaway. I was under no obligation to review it if I so chose. Nor was I under any obligation to write a positive review.
Posted by An Apel a Day at 10:27 AM 4 comments:

The boys and I made fire trucks at the Lowes Clinic yesterday morning. 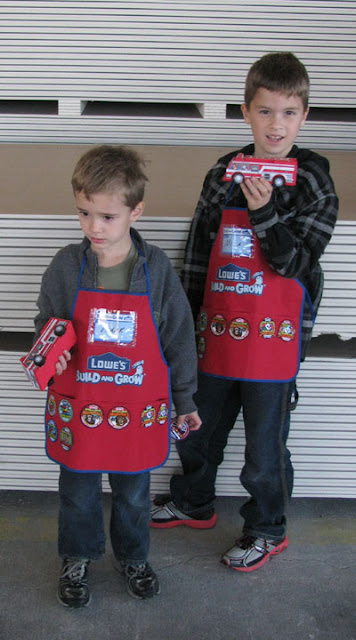 Isaak kept looking away. This is the best shot I could get of them. Last week we made mini Chucky Cheese Skeeball games. The boys didn't get into making them, or playing them. I was happy to see them playing with their fire trucks yesterday and today.

Mica even named the people in the truck. One is "Uncle Eric". It looks nothing like him, but he is a fire fighter.

Now they have 9 patches. I had to iron on the one they got today. The best way to iron them on is to use my hair straightener. It gets right in those pockets.
Posted by An Apel a Day at 10:40 PM 3 comments:

Isaak: "Can I go outside to play?"

Mica: "As long as I can dress up like Batman."

Mica: "Ya. Oh and I want to dress Isaak up like Spider-Man."

I hear them getting their costumes on.

Isaak: "Why does Spider-Man have boobs Mica?"

Mica: "Those aren't boobs. Those are muscles." 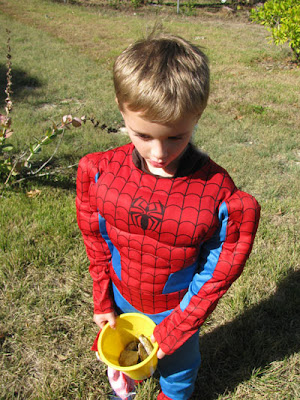 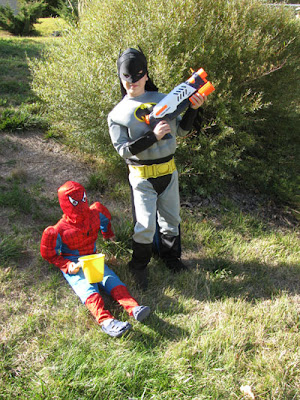 Mica: "Mom I have an Eskimo spot!"