I woke up this morning and couldn't swallow and could barely talk. The Urgent Care is becoming my best friend these days. Luckily Daddy's work is pretty dead this weekend. He's either really busy or slow. This is a slow weekend.

I sent him off to the Lowes Clinic with the boys. He's never taken them before. The boys haven't been there for awhile, so they were excited to go. It was mystery package. They ended up making a garage and mini car. 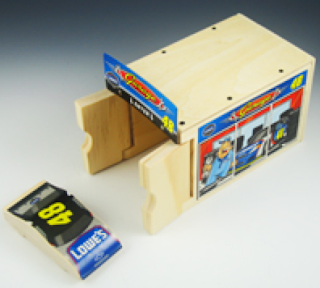 I sat and waited at the Urgent Care. I'm not one that wants to be medicated all the time, but man when I feel like crapola, and I can't even talk to my kids that's a problem in my mind. With the last cold I had I fought it off myself. I knew I didn't have Strep Throat. I had that after Thanksgiving; I just didn't feel the same way. She said, "Man you are swollen! No wonder why you can't breathe or swallow!" She wrote me a script for an antibiotic, but told me that she thought it was viral. I told her that I'd try the other things she told me to take first for a few days before getting the script filled. I got a nose spray, sudafed behind the counter, a cough syrup and more Ibuprofen because we just used up our bottle. I'm on more meds than I think I've been on for a long time.

After an extensive shopping trip at Walgreens, I finally got home. I can breathe now! That's a start! I went to do the Netti pot before taking this stuff, I was so plugged up that nothing would drain. Seriously 5 minutes over the sink, not a single drip! I'm a walking germ!

Mica said to me, "To make you feel relaxed, you could put in a movie for us. Then we'll be quiet for you!"

It's funny how kids turn things into being all about them. I made them wait. I'm not quick to let them veg in front of the TV. Finally I agreed to put something in. One wanted Doodlebops, and one wanted Land Before Time. Instead I picked their movie. They watched Despicable Me. They forgot my sister burned got it for them. It only plays on our external DVD player.

It was nice using a digital device as a babysitter for awhile. Afterwards Isaak went down for a nap and Mica read. A pretty low key day.
Posted by An Apel a Day at 4:50 PM 8 comments:


The song may be part of a movie, a kid's video or just a song we like. I'll try and include why we like it and/or the history of the song/singer.

This is a new band to me. I asked my college art students to write down unique bands, singers, musicians for me. They did. Some I love. Some I dislike. That's why we all have opinions right? What I really like is some of these bands lead me to other cool, unique bands. Certainly a score for me.
This week a co-worker told me about a New Orleans band called, Tuba Skinny. They play traditional jazz music with a twist of their own.

They started in 2009. Tuba Skinny evolved from a collection of street musicians  into a ground breaking band. They aim to bring back traditional New Orleans music to people around the world. Their sound comes from spirituals to depression-era blues, from ragtime to traditional jazz. They want to bring back the musical heritage of New Orleans. Many follow them because of their unique sound, reviving long lost songs, and well done live performances.

Check out their washboard solo:

It's so fun and good!


Many of them I can't find titles for, but this one is called Gimmie Some.


They are so charming. They play live all the time. They do have 3 CDs.

Like Tuba Skinny on Facebook, buy their CDs: Rag Band, Garbage Man and Six Feet Down at Bandcamp and follow their blog.
Posted by An Apel a Day at 8:00 AM 3 comments:

I didn't think it was possibe, but I have yet another cold. Today I'm struggling to talk. I actually feel slightly better than I sound. In one of my classrooms every other student was coming up for a tissue. I heard coughing, sneezing and nose blowing. There's sickness all around.

I was going to go downtown to art openings. With the way that I feel...I opted to stay home.

The boys wanted to play a Valentine match game Mica got from school. Mica got it all set up, while Isaak was in the bathtub. They started to play and Isaak got a few matches. Mica got up and said, "I'm not playing!" I said in my little to no voice, "Why?" He said, "Isaak's cheating. He got a few matches!" I said, "Isaak was playing fair Mica. I was watching you both play. That's how you play the game!" Mica got up and said, "Well I'm not playing if he's going to get matches right away."

I said, "Mica you need to go to bed right now! You are not being a good game player." Mica stomped off to bed.

Isaak started crying hysterically because his, "bover" brother wouldn't play the game with him. I asked him to stop crying and his crying just got louder. I would have played the game with Isaak, but he wouldn't stop crying. Isaak went to bed to.

My voice is going. I couldn't exactly have an in depth conversation with Mica, while Isaak was throwing a fit. I called Mica back out of his room and asked him to pick his game up.

Mica will have a talk with Me tomorrow, or he'll talk to Daddy if I can't talk.
Posted by An Apel a Day at 8:31 PM 3 comments:

Last night Mica and I walked to the Y; for his Jiu jitsu class.

Mica was, like he usually is in a hurry. He was running along saying, "Mom you can't catch me! I bet you can't get my gizzards!" I just tell them I'm going to get their "Gizzards" when I go to tickle their ribs. I know people don't really have, "Gizzards". I said, "Mica you better slow down! There is ice in some spots." Mica said, "Don't worry I'm running along and I have not fallen yet." We were almost there, and he was slowing down anyhow.

On the way home, Mica started running down the sidewalk once again. I made him walk. He thought I was crazy. The ice wasn't very visible. I slipped, and fast boy didn't. I didn't fall, thankfully! Luckily Mica saw me almost bite the dust. I told him, "See I wasn't even going fast, and I slipped. If I would have been running, I would have certainly fell hard!"


This morning we were getting ready to leave the house, and our power went out right as Daddy was about to get Isaak's teeth brushed. We had to get our coats on in the dark. Mica was pointing a flash light around to assist us. Even the street lights were out. In the car, on the radio we found out a car hit a pole. It knocked power out of our whole neighborhood.

On the interstate our lane was SLOW. A cop car passed us. We drove by three accidents that were right by each other.

I talked to Mica some more about black ice; how it's not safe to run on it. It's supposed to get warm here, and rain this afternoon. It should be warm enough over night that it won't freeze. Part of the problem with snow is that it melts and can turn into ice.

Last week Isaak came to cuddle with me right after a nap. All the sudden he said, "Wait Mommy!" He pulled back from a hug and all these little stuffed animal puppies fell out of his shirt.

There was one puppy that he kept calling his, "Handsome Puppy". He wore the puppy in his shirt throughout the day. 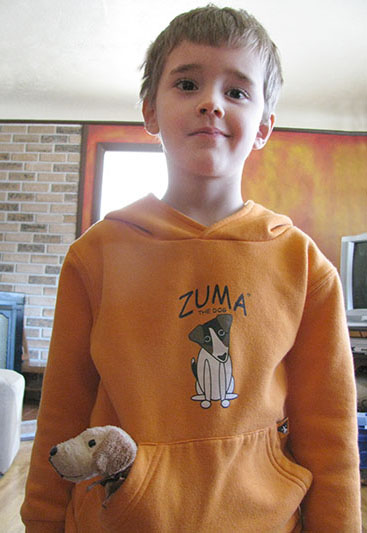 Isaak also said to Daddy this last weekend: "My puppy's mom is dead!" *He was talking about his stuffed animal.

Daddy said: "I'm so sorry to hear that! How did that happen?"

Isaak said: "She fell off my bed too many times!"

Daddy said, "That's too bad!" *While I was laughing in the the other room.

I have to say that the boys have gotten along pretty good this break! I don't know if it's all the new toys they got; that are keeping them occupied, or if they are just growing up a bit?

I've always been envious of my sister's kids connecting more than my own. Elijah was born, and his brother Evan got in his face kissing and telling him he was cute all the time. As soon as Elijah was big enough to walk, he was accepted as one of the big kids. Mica could care less about babies at the time. He did his best to stay away from Isaak. I tried including him. Then when Isaak was old enough to walk, Mica called him a baby. He wouldn't allow him to play with him.

It just seems like they are playing better together. More so than they used to. As soon as I say something like, "WOW you boys are playing so good together!" they start fighting soon after. I should just keep my mouth shut. Enjoy the peace.

Mica said, "Isaak you're a friend to me now." Isaak said, "You're not my friend! You're my bover." *brother

The other day I said, "You two are so cute!" Isaak said, "Mom I'm the only one that's cute. I'm the smallest. Smaller things are cute." I replied with, "Well you're a cute 4 year old and Mica's a cute 7 year old. How about that?" Isaak said, "I guess so."

Whenever I give Isaak a snack, he asks for more to give it to Mica.

With all that being said, they still wrestle, kick, punch and hit. They happily do these things until someone gets hurt; then it's over. Isaak wants me to feel sorry for him; just about every time. He sticks out his bottom lip and says, "Mica punched me!" My response every time is, "What did you do to him?" I don't feel too sorry for either one, when they both took part in it. Some of that is just being boys though.

Here's a unedited Christmas photo of the bovers *brothers: 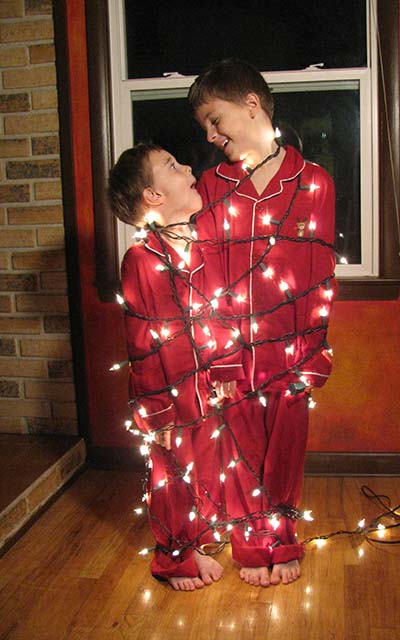 We've had plenty of days to go, but A) It's been cold! B) Sickness ruled over fun. Now we're all feeling good (crossing fingers).

Can you tell they had a good time?