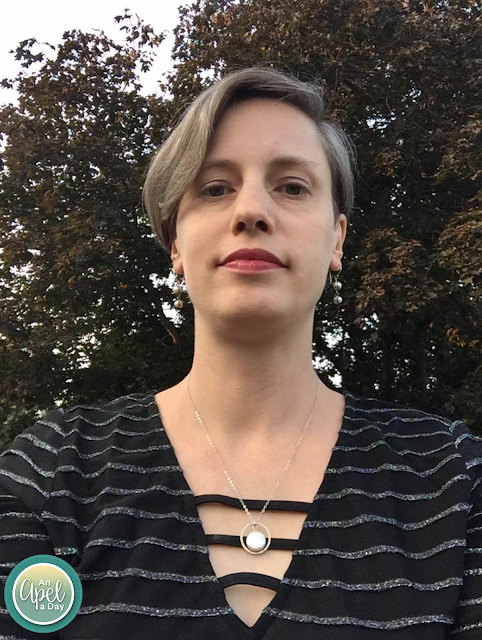 I love the V neck, the polyester fabric, the fact that it goes below my knees, and that it can be worn for dress, or casual events.

I got the large, and it fit great! Sometimes when I get things online, I'm a bit nervous as to how it's going to fit. 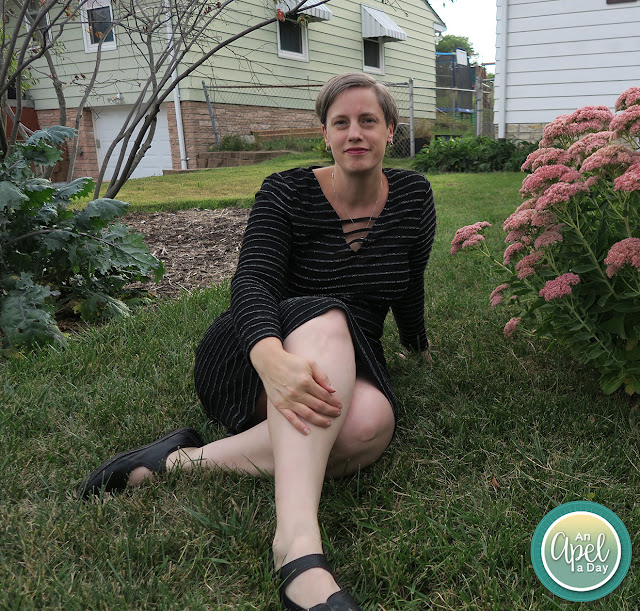 There wasn't a whole lot of cleavage that showed, but I was ok with that. In the image online more cleavage shows. I was expecting the boys to see that, and point it out right away. It's good it's sleek, yet not too much.

About the only things that I didn't like were not the dresses fault. My legs are super white because they are covered most of the time. Ha! I do need to loose some weight. That's a thing. I'm glad I can finally be active. For months last school year it was asthma attack after asthma attack. I couldn't even climb stairs without feeling winded that's how bad it was. Then after my nose surgery I was told not to do anything. I couldn't even bend over. It feels good to now go hiking, and be active with my boys. I hope to get into a routine, and that will help the pounds go off. 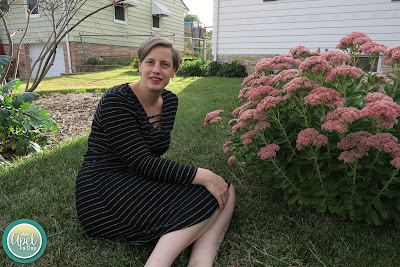 
Usually I'm more of a skirt person, but I do love this dress. What about you? What do you like to wear to when you dress up?

Disclaimer: I received this set in exchange for writing this review. I was in no way influenced by anyone in regards to this review.
Posted by An Apel a Day at 11:19 AM 5 comments:

After spending over $200, I knew I just needed to get over it, and have fun. It's the place Travis had memories going to when he was a kid. I knew the boys would have memories.

I'll go on water rides. I really enjoy the raft one because we're all together, can talk, and we don't know who will get wet. 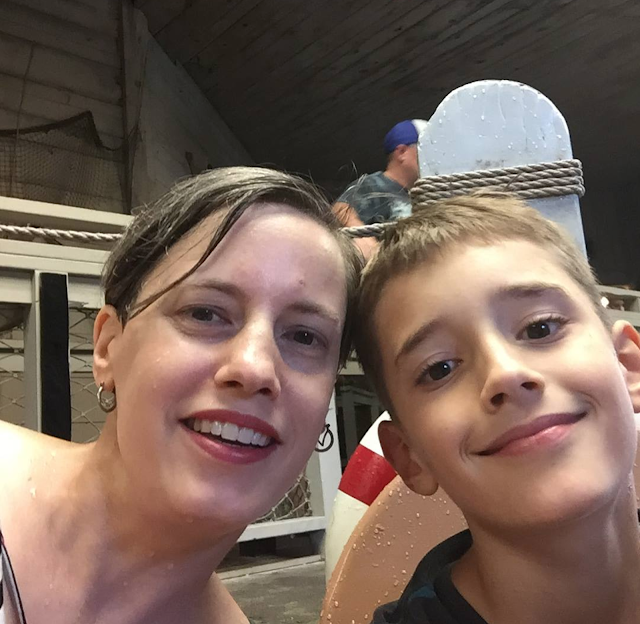 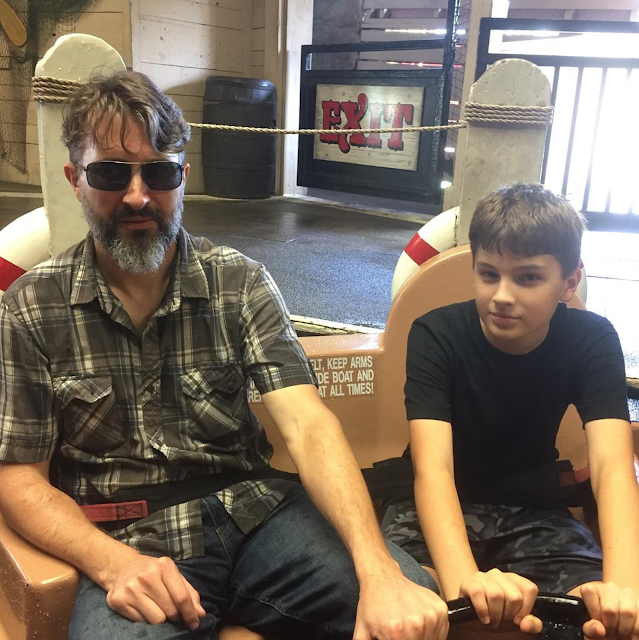 I won't go on roller coasters. The boys went on three different ones. 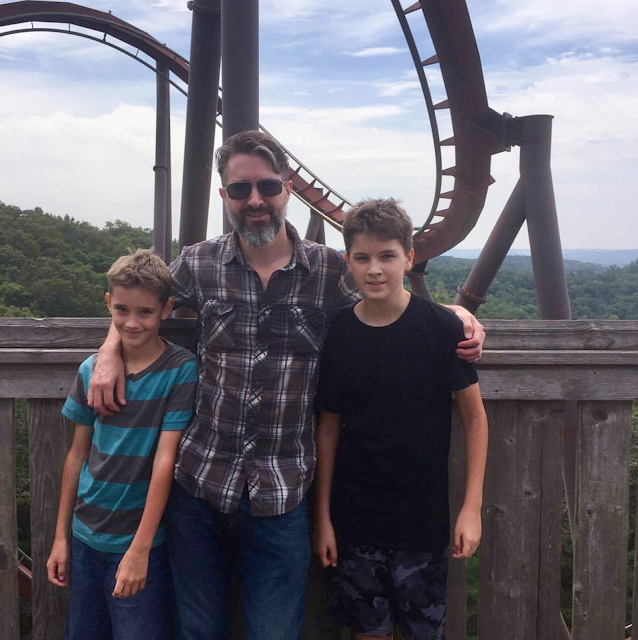 After a few roller coaster rides the boys wouldn't shut up about me joining them on some. Even Travis joined in with them. I said, "Absolutely not! I went on them as a kid. I didn't like them then. I most certainly won't like them now!" I was starting to get pissed. Here I spent a bunch of money, and now I was being pressured into going on something I didn't want to go on. They begged and pleaded. I stood my ground.

I started talking to a family that was waiting for their family to get done. They understood me. It's sad when complete strangers gets you, but your own family doesn't even try.

One lady said, "The lookout part isn't any better than the coaster!" I could see her point. It was high up, and not sturdy. At least it wasn't jerking you around up and down hills!

A little boy sat there. I said, "Have you gone on this?" He said, "Never again!" He said it was way more than he could handle. He felt sorry for any kid that went on it.

A 18 month old cried every time the roller coaster took off. It was a loud plunging noise, and a fire showed up. I felt for him!

I waited about 4 times for my family. Keep in mind that with roller coasters I feel like the car could roll on off the track. I pictured my family leaving me each and every time they went on. Not so fun!

I didn't think things could get worse, oh but they could. I waited in line for the train ride around the park. I said, "Go on that roller coaster that you missed going on. I'll wait in line."

I texted Travis: Line is moving fast now. I hope you're coming.

Travis texted back: It was such a fast line. We went again.

I texted again 5 minutes later: Ok so I'm letting other people go ahead of me in line because you're not here. I don't know how long I can do this!

Finally he got there even 5 more minutes later. I was super annoyed!

When it was time to leave we were in a hurry. We had reservations for a magic show, and still needed to eat dinner. I was thinking, We wouldn't be in a hurry had you come to the train line after one ride on that last roller coaster.

I said, "Let's take a shuttle." Well none of us paid attention where we parked. We walked up to the park. I was only guessing as to what shuttle took us where we needed to go. It took us closer to the car than if we walked, but farther than where our car actually was.

Travis said, "See if we would have walked..." I said, "We are walking. The shuttle just took us most of the way to our car." I was fuming mad by that time. Of course they were all wondering why I was mad.

What rides do you like to go on? Have you ever have a vacation that is perfect, and no one has fought?
Posted by An Apel a Day at 4:32 PM 5 comments:

WW: Ripley's Believe It or Not! Museum

I just reviewed a book for Ripley's Believe It or Not! Shatter Your Senses! 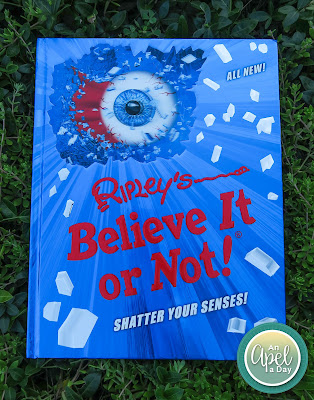 When I saw that they had a museum in Branson, Missouri we decided to take the boys there. Travis and I went to one in Wisconsin Dells, but the boys had never been to one.

I have to say there museums are so fun, informative, and great for all ages.

Their building is so cool because it's off-kilter. The boys loved the Transformer in front. I just wish I could have captured it without the power lines. Oh well. 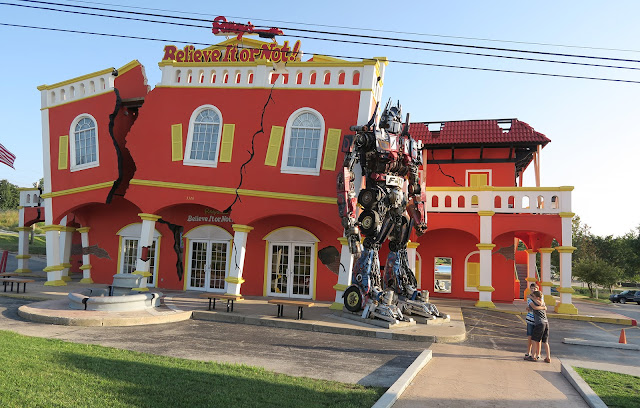 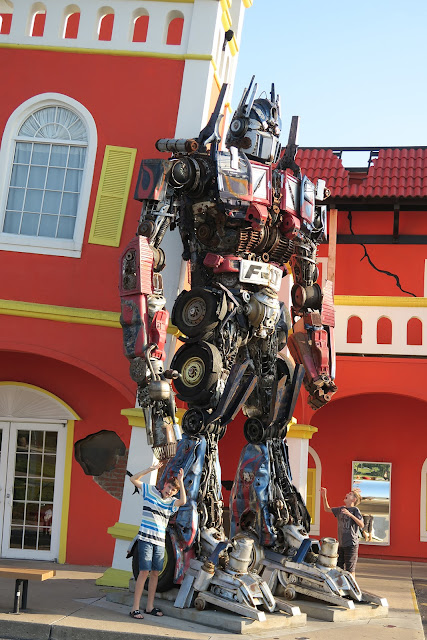 Inside they had a lizard hanging from the ceiling: 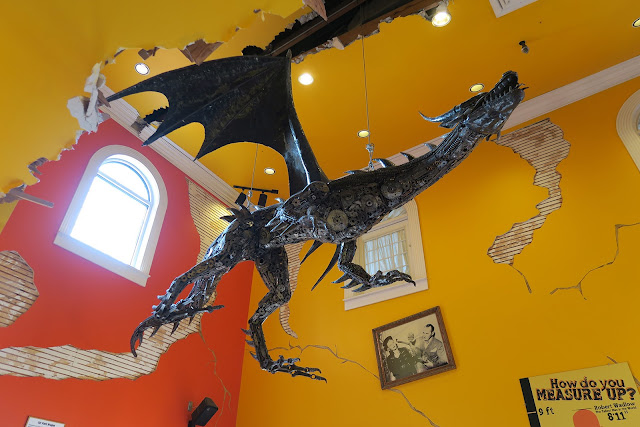 Art was behind glass. Some of it is really cool. Just as cool, if not better than some art museums.

A sculpture made with beads: 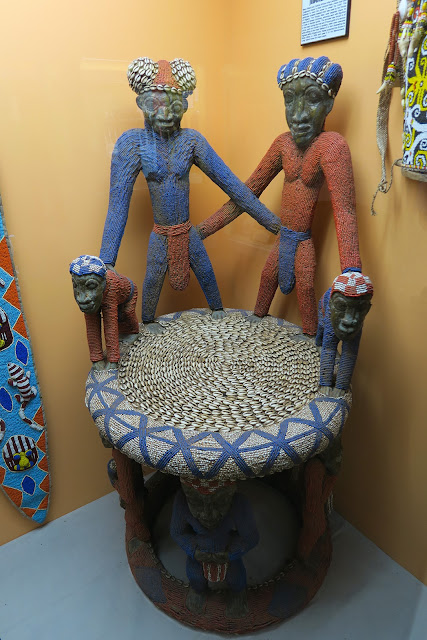 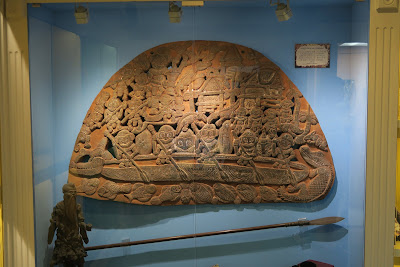 Lots of masks, and they had a display of shrunken heads. There was an i-pad set up to shoot your own head to shrink it. 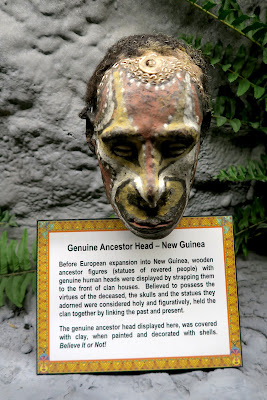 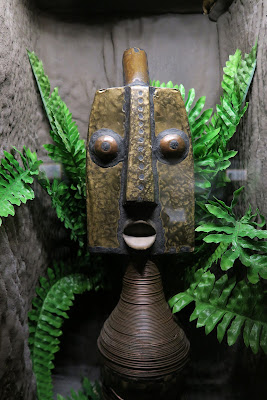 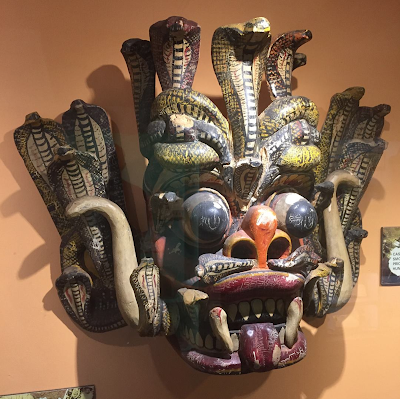 Do you remember the movie Big with Tom Hanks? Zoltar is the machine that turned him big. 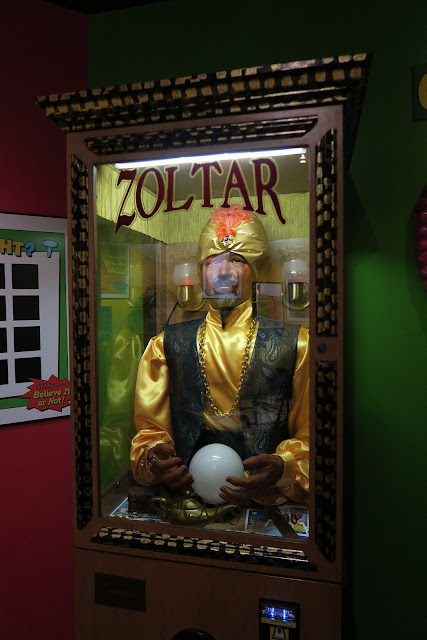 Lauryn Hill made with cassette tapes: 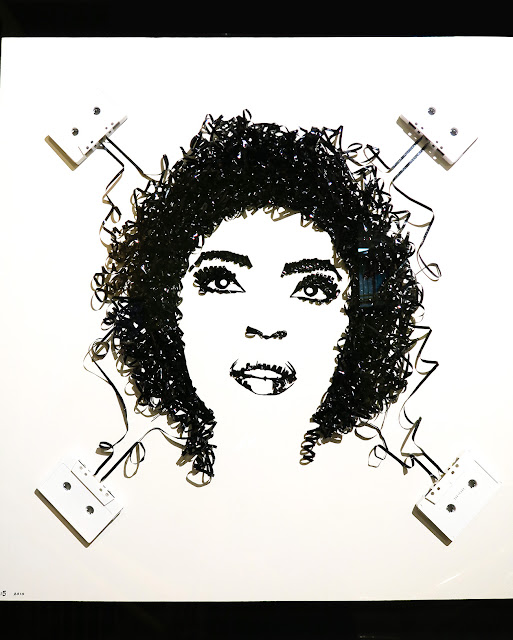 A lion made with rubber tires: 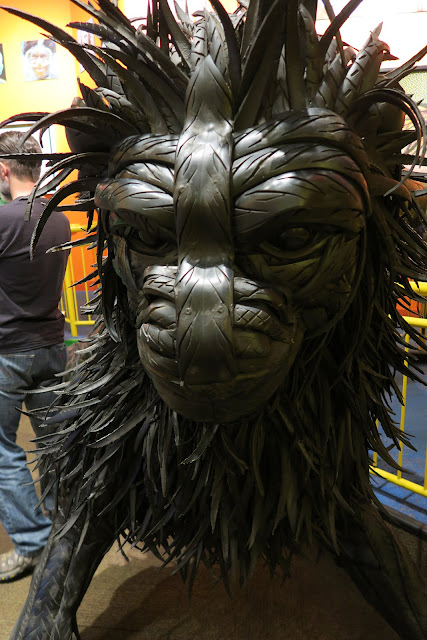 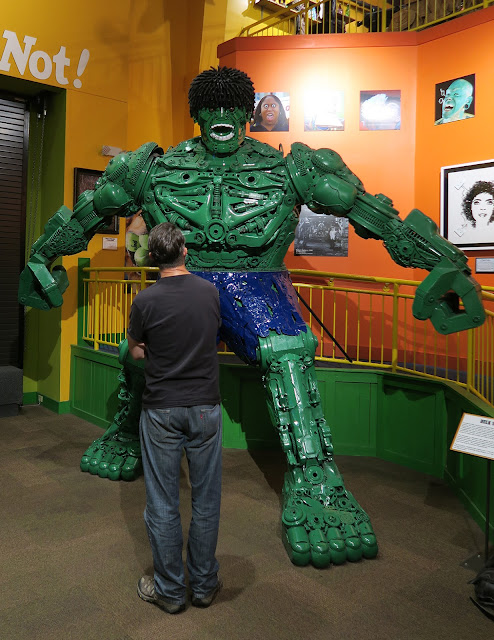 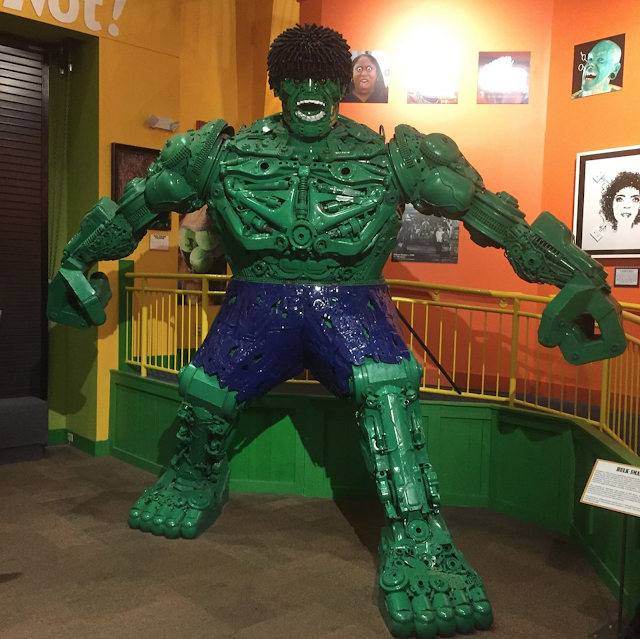 The biggest roll of toilet paper. Don't squeeze the Charmin! 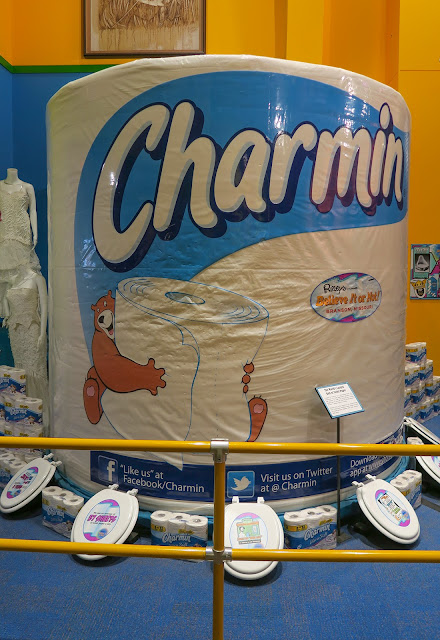 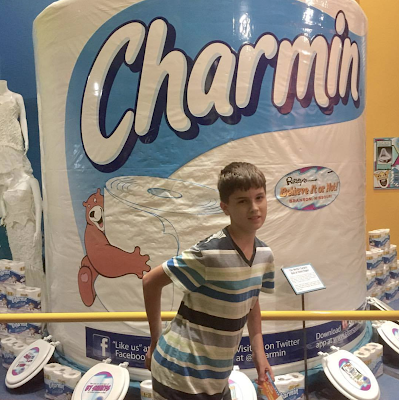 This mask was fun: 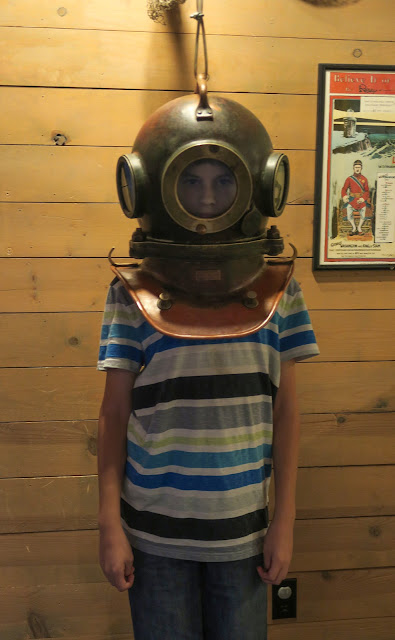 They had funny mirrors set up. I think Travis had just as much fun as the boys with this mirror. 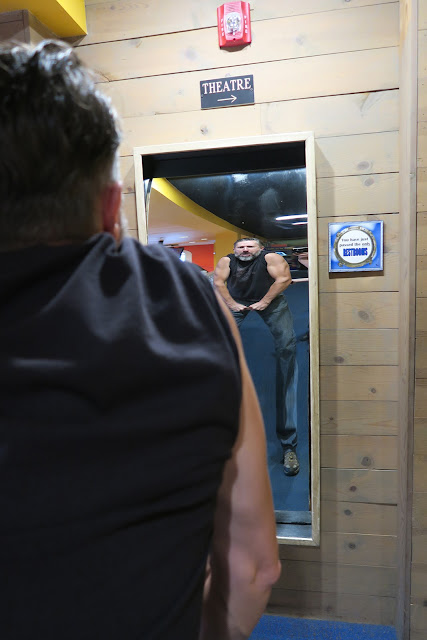 The tallest person in history. I thought my Dad was tall. We're all on the same floor that he's on. 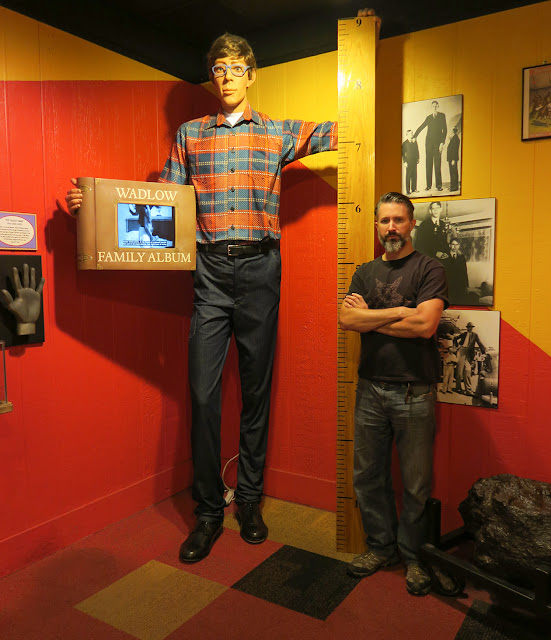 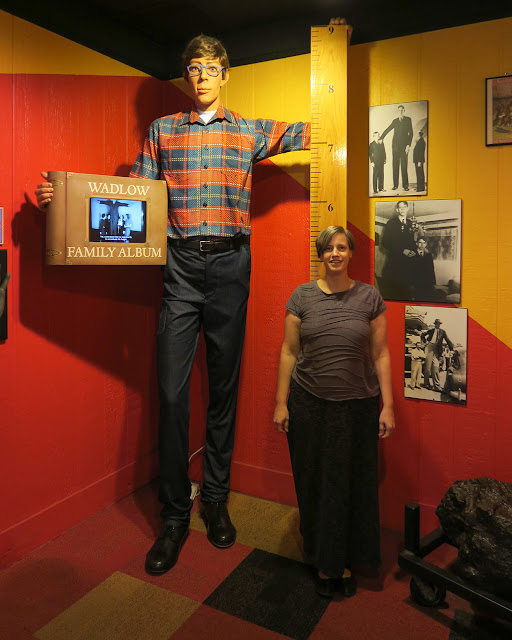 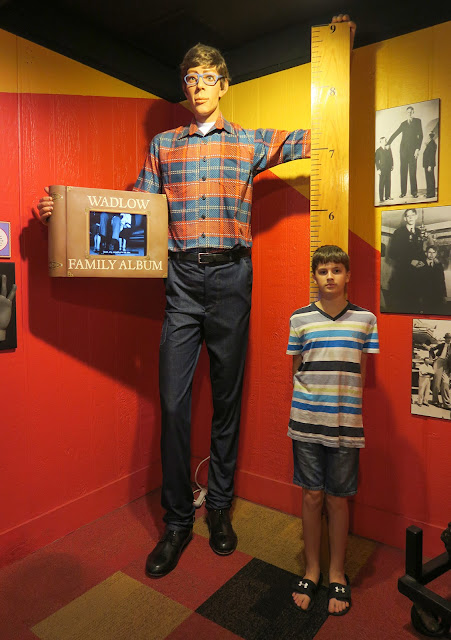 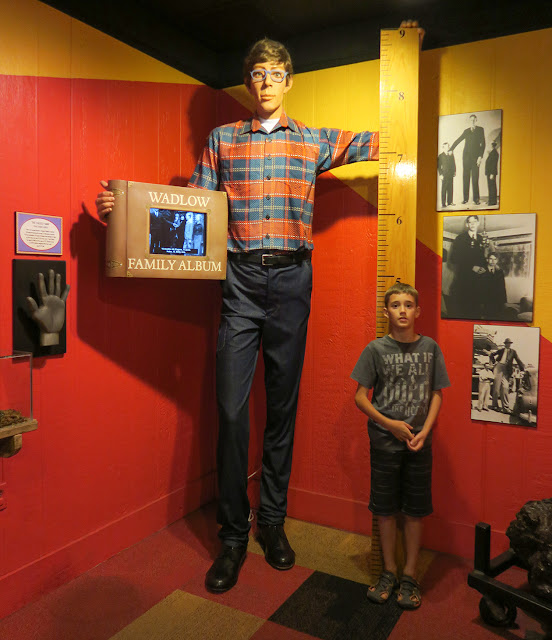 Isaak made a new friend! 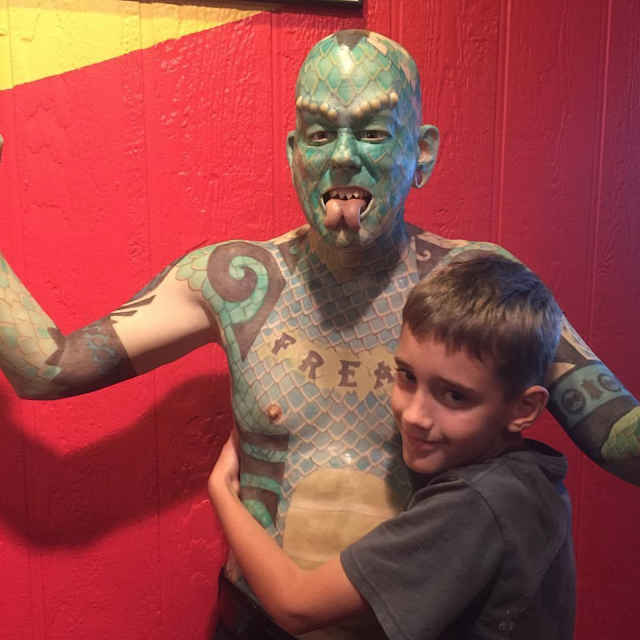 Have you been to a Ripley's Believe It or Not! Museum?

Email ThisBlogThis!Share to TwitterShare to FacebookShare to Pinterest
Labels: museum, Ripley's Believe It or Not!

Branson, Missouri is a tourist trap type place. Most everything costs money. I didn't really do my research before we headed down there on Labor Day weekend.

Negatives: Traffic is crappy bumper to bumper. It could be because it was Labor Day weekend. Most things are going to cost!

This is what we did:
Other things we did:
Things we wish we did:
I told the boys that since we went to Silver Dollar City all day one day, that go-kart riding was out. They were ok with that.

Do you like to vacation at tourist trap type places, or someplace more scenic? I'm more of a scenic person, but I knew the kids would like all the activity.
Posted by An Apel a Day at 3:00 PM 4 comments: