It's not really introducing anyone you don't really know already; like I usually do.

A lot of the bands I find are from late night TV. David Letterman had this next band on awhile back. It's called Yeah Yeah Yeahs. I like that the singer's voice is mixed with such a variety of sounds and other voices.

They are an American indie rock band formed in New York City in 2000. The group is composed of vocalist and pianist Karen O, guitarist and keyboardist Nick Zinner, and drummer Brian Chase.

This song is mixed with Broadway inspirational voices.


Skeletons - The making of.

Isaak's going to Kindergarten in a month. Panic mode set in for me a week ago. I'm not sad he's going to be at school all day.

I'm panicking because he is:

A) Not wiping his butt all the way after doing his duty. He wiped once and said, "Mom come finishing wiping me!" I showed him again with 2 squares of TP how to wipe his booty. Then explained that you have to keep up that process until all the brown stuff is gone. He still tried to call for me, and I said, "Did you wipe until the brown stuff is gone?" Isaak said, "Mom I don't know if it's gone. It's behind me, and I can't see."

B) All the sudden Isaak's decided he's going to be a night owl. We've always put our kids to bed around 8 or 8:30. 7:30 if they are super tired. We've been putting the boys to bed at 8:30 since it's summer time. Both boys go down. Then Isaak lays there until 10:30 or 11. I'm happy that he doesn't get out of bed. He lays there and just talks. This has gone on for a week. I'm hoping this going to sleep at 10:30 stops very soon! He doesn't want to get up in the morning and he's a cranky child when the afternoon hits.
Posted by An Apel a Day at 1:58 PM 5 comments: 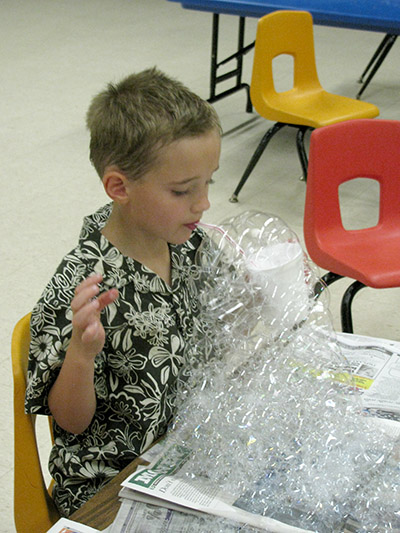 It was hard getting him to stop blowing bubbles. Then when I said, "It's time to rinse your hands." he wanted to add more soap to his hands. I said, "No buddy you have enough soap on you. Just add water." 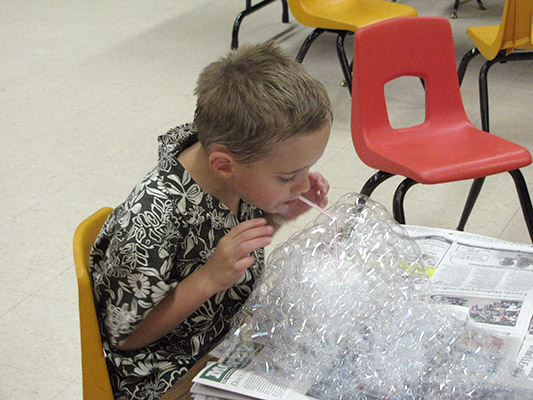 Did you like bubbles when you were little?
Posted by An Apel a Day at 6:02 AM 7 comments:

Mica just had his 8 year check up.

The boys got to watch Monsters Inc. in the lobby before Mica's appointment. As you can see Mica was glued to the TV. 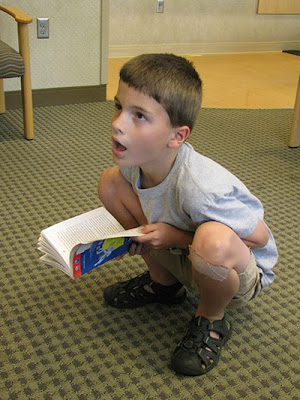 I'm all for safety, but it's sort of crazy when you think about it.

WW: Joined At the Head {Linky}

This is how the boys looked one night sleeping in a hotel bed. 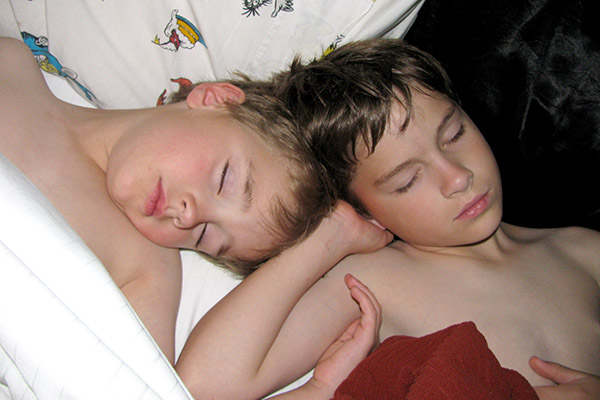 If you have a moment I have a giveaway up for a HomeRight Steam Machine. It does a great job! Check out how it cleaned my oven door after a fire!
Posted by An Apel a Day at 2:09 PM 36 comments:

Do You Ever Feel Better When Something Gets Solved That Doesn't Even Involve You?

There have been two cases here that have gone unsolved until today. Both cases were related. Two people were stabbed to death in 2008. It was a little boy and the house keeper. Then earlier this year two more people were stabbed to death. The Dad more than likely was the target in the first case; he wasn't home, so his housekeeper and son were stabbed instead. The connection between the cases is that they both houses had people that worked at Creighton University. Both parties were well standing citizens, doctors, and teachers.

I thought about the cases a lot just because the killer was still on the loose, it involved a little boy, and I knew their connection to Creighton University meant something.

The supposed killer is also a doctor was fired for odd behavior back in 2001. He lives in Illinois. He was arrested for driving under the influence. Now he's charged with 4 people's murders. He's traveled back to Nebraska twice, during the times that the murders happened.

My sister Terra and I used to watch Unsolved Mysteries on the Lifetime channel right before bedtime. A few times Robert Sack's (the host) voice would enter my dreams. A few of the cases I was wondering what the answer was to them. I always loved it when the show had updates about finding the person that did this, or that.

Do you ever feel better when something gets solved that doesn't even involve you?

What's your favorite mystery show (fiction or non fiction)?
Posted by An Apel a Day at 10:58 PM 7 comments:

Oh the Things They Say

Two nights ago he was looking at my earrings and said, "Mom I can make you a pair of earrings. It would be really easy! I just need to get some of my pipe cleaners, cut off all those fuzzy things, and bend them to look like earrings. They would look really good on you."

Lucky for me he couldn't find any scissors the next day.


Yesterday he tried on Daddy's boots and said, "Mommy when Daddy dies I want these things."

I'm so glad he's thinking about what he wants when we die. -Sarcasm

Later that day he said, "When you and Dad are gone, I can use my belly powers and get pregnant to have babies."

So he loves babies, but he says he hates girls.

We went to a learning store just the other day and he wouldn't sit between two girls. Girls have cooties as far as Isaak's concerned. That's so opposite of Mica. Mica has always loved girls. Isaak says he hates all girls he doesn't know. He likes the ones he knows.

He wants to marry me when he grows up. He kisses me on the cheek and often whispers, "Mom we're married." I whisper back and say, "It's illegal for us to get married Isaak." Isaak said, "What's illegal mean?" I said, "I can only be married to Daddy, not my son." Then he pouts.

Someone took a spill on their bike. I was there when he fell, I hugged him, he walked away, and went on riding.

Then he realized he was bleeding. He dropped his bike, and it took a long time for him to get up, and just walk over to us. I knew he was alright because I saw him walk prior to this. For some reason seeing the blood had him freaked out.

Just a reminder you can go HERE to enter to win a HomeRight Steam Cleaner. The giveaway has fairly low entries. ENTER now!

I've been using my HomeRight Steam Cleaner every few days it seams. It cleaned my kitchen trash can really well! It was super dirty after demolishing our old kitchen floor and installing a new kitchen floor. I forgot to take pictures of that. Trust me the trash can was gross; now it's clean!

I cleaned our red stool chair today. It's a chair that Isaak stands on daily, and I stand on whenever I need to reach things that are high up. You can imagine on the step parts of the chair it gets dirty. It's hard to clean in the grooves. 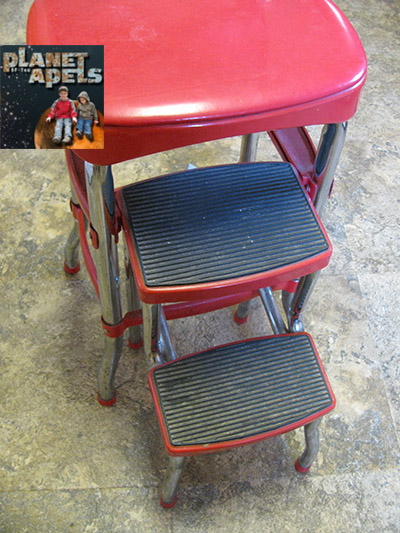 Although it's not perfect, it's pretty darn close. I'll show you the rag at the end of the post. The steam kind of gets in the way of some of your cleaning view. WOW it still does a rocking sweet job! I was able to get inside and under the chair as well. Since it sits in our kitchen grease gets in some spots.


After Using the Steam Cleaner 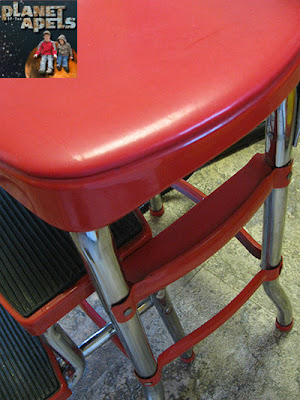 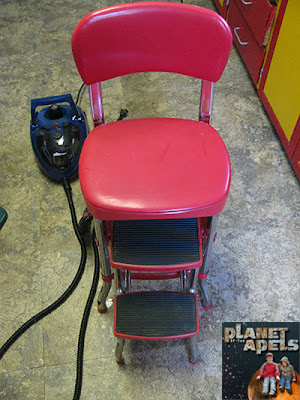 I still had water left in the steamer, so I cleaned the dust pan. I thought about getting a new one; ours looked so bad after getting tape glue up off the old floor. But all you can buy now a days is plastic. I like that ours is metal. It sits closer to the floor. 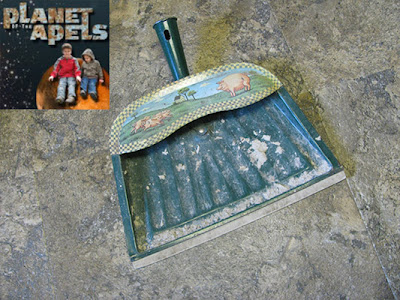 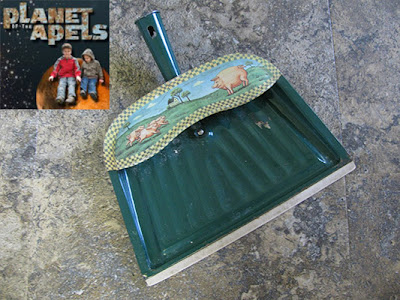 The one spot you do see on the dust pan is not dirt. It's just where the paint was previously off the dust pan.

Here's the rag after I was done. YUCK! It was white before I started cleaning. 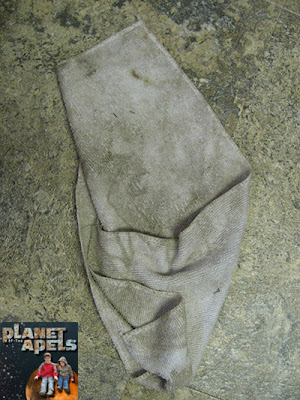 He Won't Let Me Take a Picture

I know every kid goes through phases where they just won't let you take their picture. That's Isaak right now. 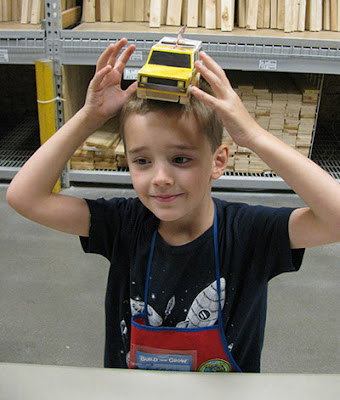 Me, "Boys let me take your picture." Boys, "Ok go ahead Mom." That's Isaak behind Mica. 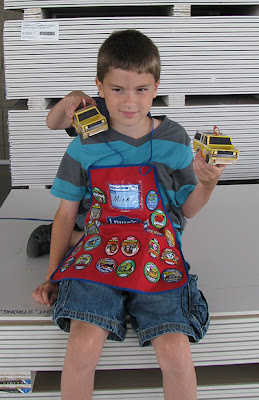 Me, "Come on Isaak get in the picture!" Isaak, "Ok Mom. You can take the picture now." He's crawling out of the picture, and laughing. 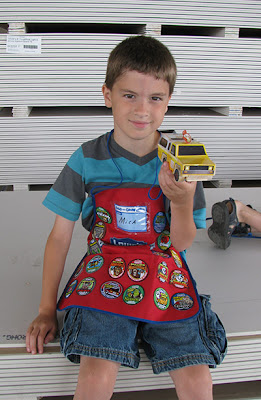 At that point I was annoyed. Now I'm laughing about it.

By the way we're about out of room for new patches. Do we A) Ask for a new apron? or B) Get long sleeve shirts to iron on more patches?
Posted by An Apel a Day at 3:25 PM 5 comments: