I started ten weeks ago doing what I call Sing, Sing a Song Saturday.  I'm going to post one song on Saturdays that the boys or I like. I'll see how long I can keep it up.

This is blues band called MêM. The singer is albino. Vincent Theard and M Nahadr along with a host of eclectic, committed, estranged from the narrow, musical madmen and women conspire to inspire each other in a collection of musical mindsets disguised as melodies compiled to make up their music.


M Nahadr is not just a singer, she is an activist about being albino. She helps people to understand what it's like to be albino. She's been in the National Geographic and did an interview with The Discovery Channel. She talked in an interview about having friends that are dying of skin cancer. Some things are very difficult because she has to stay out of the sun and her eyes are very sensitive. Her voice on the other hand is amazing. She puts passion into what she sings.

I've been thinking up all the free summer things that people have told me about and some of which we've tried.

Here's a list:
If you have anymore ideas than what I've listed, please leave a comment. I'll be happy to add it to the list!
Posted by An Apel a Day at 2:05 PM No comments:

Del Monte supplied me with a recipe: 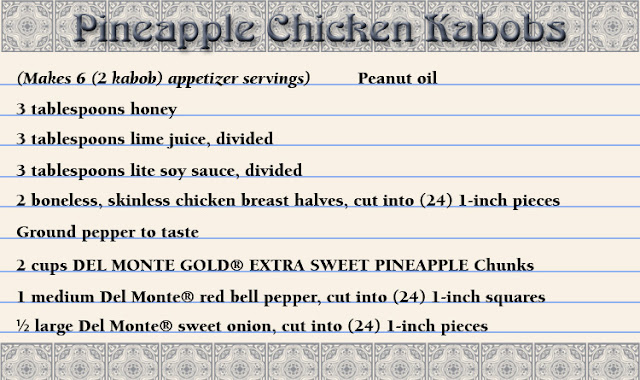 To make basting sauce, in a small bowl whisk together honey, 2 tbsp. lime juice, and 2 tbsp. soy sauce until smooth.

Sprinkle chicken pieces with remaining 1 tbsp. of lime juice and soy sauce. Sprinkle with pepper to taste. Marinate 15 to 30 minutes.

Grill for 10 to 15 minutes, turning to cook all sides. Brush with basting sauce the last 5 to 10 minutes. Serve any remaining sauce over kabobs.

The opinions on this post are my personal take on the products. This blog is a personal blog written and edited by me. I am not compensated to provide my opinion except for receiving the products themselves to test out. By posting this I have a chance to win a prize package by Del Monte. I was under no obligation to review it if I so chose. Nor was I under any obligation to write a positive review or sponsor a product giveaway in return for the free product.

If you have questions about this post please contact me at: alissa4illustrationAThotmailDOTcom
Posted by An Apel a Day at 4:31 PM 2 comments:

At the Museum of Science and Industry Museum in Chicago we got to see a lot of different types of transportation. The boys were in heaven there. It's crazy how much is there! 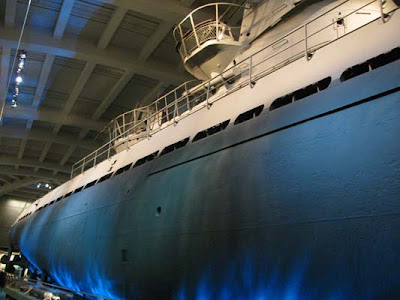 We didn't get to go inside, but they did have a station of what it looks like inside. Mica didn't want to leave this station. 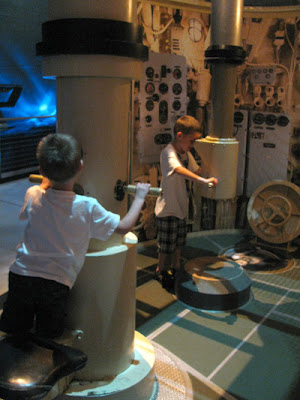 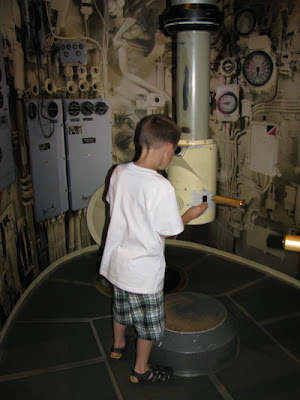 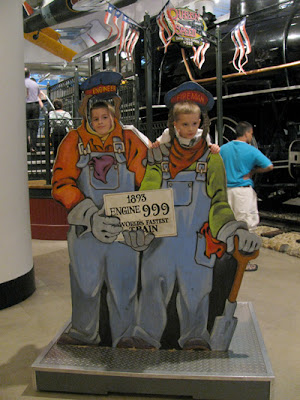 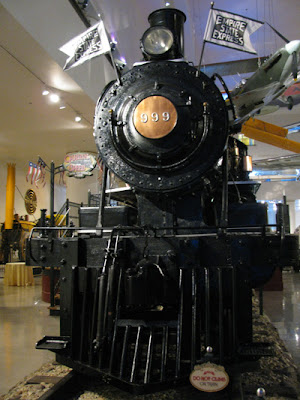 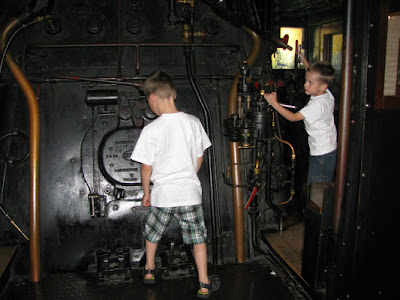 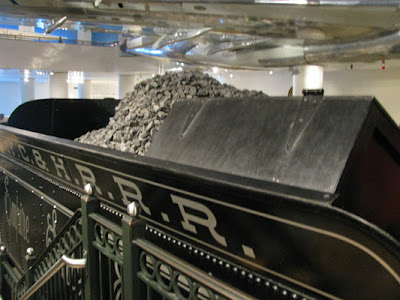 They had a model train set up of Chicago. 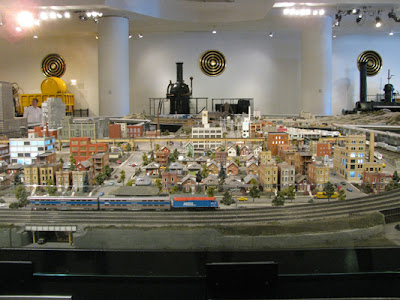 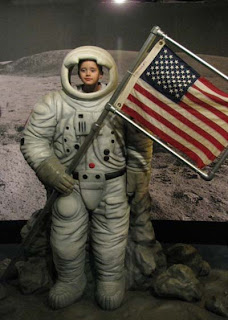 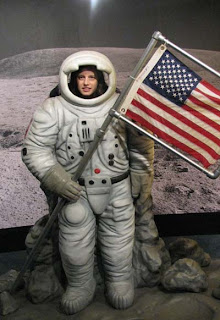 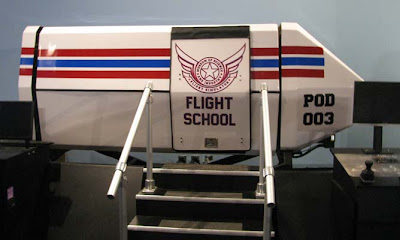 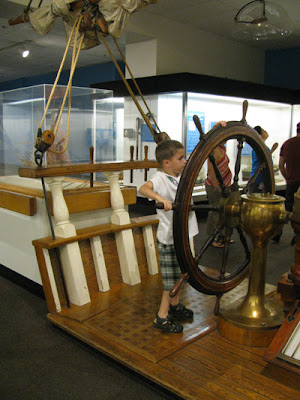 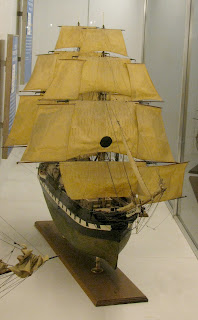 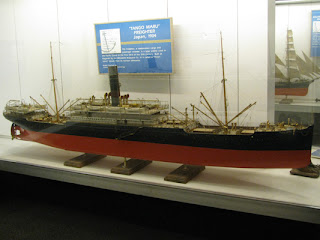 I'll Be a Man Who Will Fight for You Honor

I ordered Karate Kid 2. It came in the mail yesterday. The boys were super excited to see it! They love the Original Karate Kid and the newer sort of remake The Karate Kid.
We sat down and had movie night. I don't think it had enough action for Isaak, but he enjoyed some cuddle time. I was working on an art project, which involved seashells; Isaak loved playing with them as well. Mica was glued to the TV. I knew he'd like the movie.

Last night when that song played I sang; Mica looked up at me like he was thinking, What the hell Mom? Daddy said, "You better stop singing that song!" I knew it would get in his head. Later during the credits, it was playing again. I grabbed Mica and started dancing with him.

Then when it was time to do dishes I heard Daddy singing it. :) I said, "I thought you didn't like for me to sing that song?! Here you are singing it!" He said, "It's your fault! You got it in my head!" Then this morning he sang it again.

PS I didn't just have a crush on Ralph Macchio. I liked Tom Cruise, before he went a little wacko. River Phoenix was so hot before he ODed on heroin/coke. Pretty much all my teen crushes went down hill. A lot of stars go downhill.
Posted by An Apel a Day at 9:50 AM 5 comments:

We went to the Shedd Aquarium in Chicago. I think the Jelly Fish picture I captured were my favorite shots of the trip. 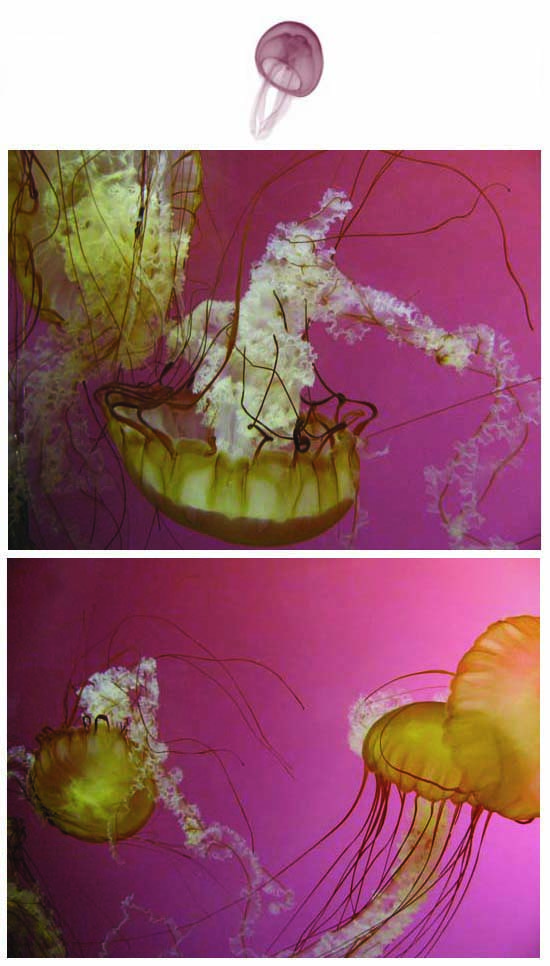 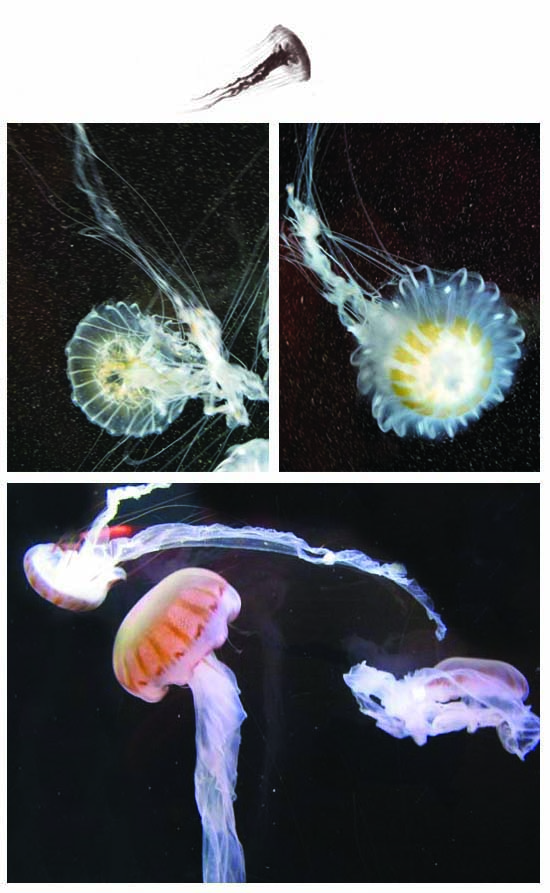 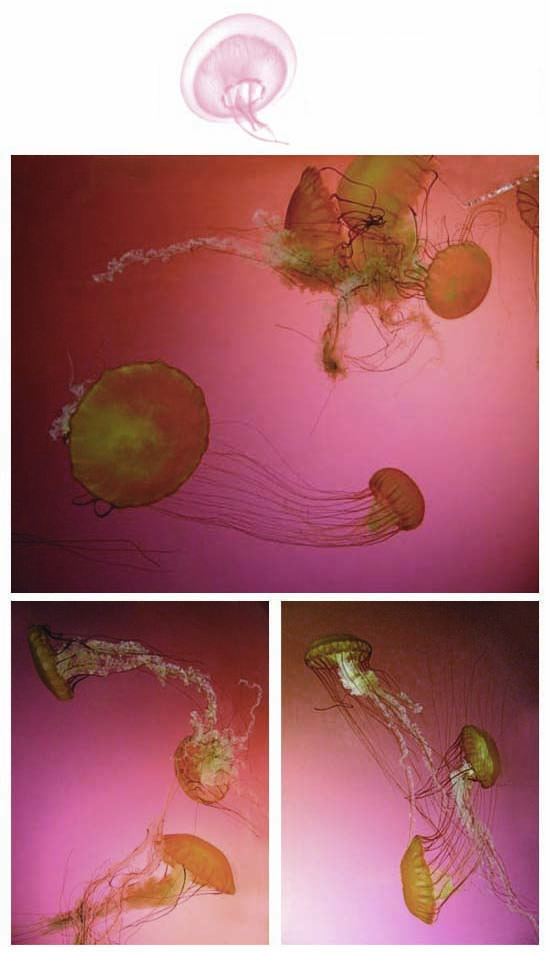 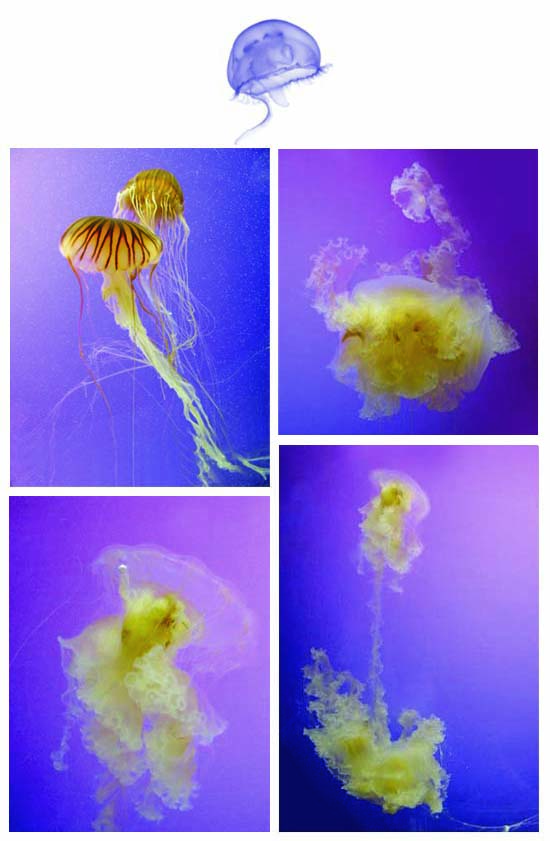 These were too fast to shoot!

I just joined Pinterest. If you follow me, I'll follow back. :)
If you have a moment, check out my low entry giveaways, located on my sidebar.
Posted by An Apel a Day at 3:32 PM 38 comments:

Do Your Kids Fight?

I think the answer is, "YES!" for most families.

Yesterday Mica came running down the lawn and said, "Isaak hit me!"

Daddy goes up the hill to see what the deal is.

Isaak said, "Mica was laying on me and wouldn't get off!"

Daddy said, "Is this true Mica?"

Mica said, "Well I didn't have a blanket to lay on, so I laid down on Isaak." As if it justifies him laying on his brother!

Then they both had to come indoors.

We've caught Isaak spitting on Mica twice. Why? Because Mica's doing something first. UGGG!!! That's not something that is sanitary!!! I got on Isaak big time about that!

Oh and has a habit of picking his nose and you maybe guessed it, eating what he picks out! YUCK!!! We had a major talk with him about that one. He said, "But they taste really good. Daddy said, "I don't care if they taste like chocolate chip cookies! You don't eat anything that comes out of your body. Your body is trying to get rid of it because it's yucky. Lets hope that talk helped!

I've heard of people tying their kids together to do dishes; just to learn to get along. If they were old enough I swear I would.
Posted by An Apel a Day at 11:54 AM 3 comments:

Our Destination was Nearly a Fail

On our trip to Chicago we had fun. The morning before leaving Daddy said, "I can't find our tickets to go back home!" I'm thinking in my head, "What you can't find our tickets! We kind of need those don't you think?"  Instead I said, "Well call the train station and ask if we can still get on the train." He did just that.

He came inside and said, "Well they said they can't do that. We have to buy new tickets if we can't find them." He was trying to search my purse, which I recently cleaned out. I was trying to tell him to call places to see if our tickets were there, which he knew our tickets were not at. We were making each other annoyed, pissed off and I was beginning to panic.

The guy we were staying with told me, "Alissa if I did this my wife would kill me. You are being great." I said, "Sam he thinks it's my fault for telling him to put the tickets in his book." More was said, but you get the drift.

All the while, the kids were watching cartoons! Thank you, cable! Watching cable was part of our vacay to. We don't have cable at home. The boys were glued to the TV.

I continued to pack and make breakfast. Daddy looked for the tickets.

It finally dawned on me that they might have a lost and found section at the train station. I told Daddy to call and ask.

Sure enough our tickets were turned in. A big sigh of relief fell over the house! We both apologized.

Daddy and Sam ran the kids to the park to burn off energy, while I finished packing.

Off to the station we went. It was much bigger and busy in Chicago then Omaha, Nebraska!

When Daddy asked about our lost tickets, the man behind the counter said, "It's your very lucky day sir!" Out popped the tickets. 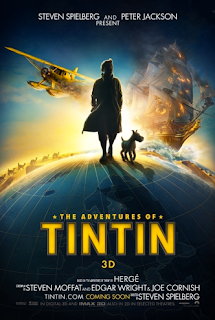 Once I saw them I was like, "I remember seeing that! It was on the back of my final seat." Sometimes traveling with kids, we have to play musical chairs without the music. Then I said, "I thought for sure that was a brochure for a movie and nothing more." Nope the tickets were tucked away inside Tintin in 3D. Daddy never showed me the tickets, so I didn't know they were stashed away inside a movie ad.

Off we went to sit and wait for our train to come. It's always interesting watching all the different people that travel. In my mind I set stories about why and where they are traveling. 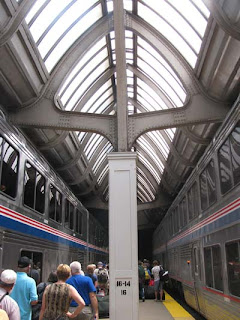 We were supposed to sit on the lower level. No seats! Up we went. We were split up. A very nice gentleman made it so we could sit together. We sat with a group of high school kids. I felt like I was teaching, only I couldn't say a word. They were worse then our kids with how they bounced around, had little regard for anyone else, but themselves. They were even on a mission trip. Hummm! It's the age. 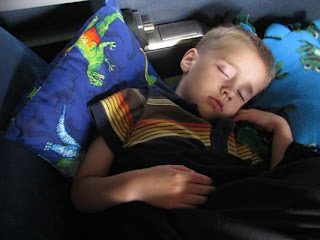 The night prior Daddy and I argued about me getting Subway to take with for the train. Daddy thinks eating a few hour old cold sandwich is gross. Maybe it is. *He went hungry by choice, while the kids and I devoured our wonderful sandwich.

I say if that's all we argued about for nearly a week, that's pretty darn good. It wasn't like we tore each others head's off.
Posted by An Apel a Day at 4:26 PM 2 comments: