Last week I found out that Fresh Thyme Farmers Market, where I work is closing. They called us in, for a “mandatory” meeting to tell us. Here I was thinking the mandatory meeting had something to do with my comments I made in an employee opinion matters survey. I have a track record of sharing positives and things to work on in surveys. At the last place I worked I was called in to the owner’s office to talk about if I liked my job or not. Truth be told there’s just as many things to say positive, as there is to say what to work on with any person, place or thing. Sure one might say I’m critical, but I find it helpful. Anyhow the meeting up being nothing about that. My manager told me that he wanted us to say exactly what we thought.
We as managers/supervisors were told first because we’re leaders. As it turns out I’m feeling more like a leader than ever before. I listened to the cashiers vent, handed out my business cards to have them use me as a reference, and made them cookies.
What really bothered me is the people that come into the store every week to shop. One older man looked lost and said, “I don’t know where to shop now.” I wanted to hug him! I’ve helped him countless times with the card reader. I think he finally has it down. Another guy comes in with his kids, and gets them one piece of candy from the bulk section each and every time.
Here’s Their Website:

I don’t feel like they’re here when I need them most.
They decided to close all Nebraska stores because it’s too hard to get to us. We’re kind of in the middle of no where. Omaha’s a want to be big city. It had nothing to do with our stores performance. They left us all to find jobs in the middle of a pandemic.
Here’s my question: Why build Fresh Thyme Farmers Market if it is hard to make deliveries to?
I closed both nights, when the sales started. It was crazy busy! It took me two extra hours to close.
Night one of closing I was supposed to close with a manager. Instead the manager dropped a shelf in the safe, rolls of coins went everywhere, she had a fight with her husband on the phone, and I closed myself.
Night two of closing my last customer had a cart full of candy and baby food. I had to count everything. The register wigged out, and the whole order disappeared. I had to do it all again. All that candy I counted twice, they decided they didn’t want it.
Today my manager never showed up, and my fellow supervisor wanted to go work in grocery, where he wasn’t needed.
I have this horrible habit of wanting the best out of a given situation. I want to do good, have others be positive, and feel the love. Isn’t that what life should be about?
Posted by An Apel a Day at 8:19 PM 3 comments:

Any Time to Say #thanks

Out of all the holidays, what’s your favorite one? I enjoy Halloween, Thanksgiving, Christmas, and Easter all about the same. Of course things will be different with social distancing, and mask wearing. We don’t even know how these holidays will work. We’ve talked about my parents just visiting each family.

Now that it’s cool outside I’m feeling like pumpkin pie, and all the foods that go along with Thanksgiving.

Thanksgiving and Christmas are the two holidays that usually bring families together. How are you changing your plans, for the holidays with COVID here?

I got this cute Thanksgiving outfit, for my new niece to wear. She just came home from the hospital yesterday - finally. 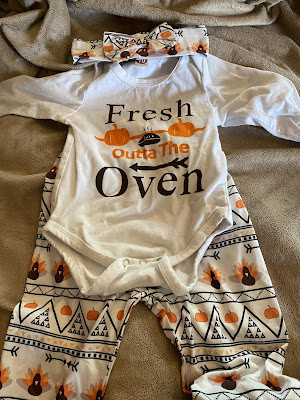 The outfit only comes in two sizes 0-3 months and 3-6 months. Kind of small, but she was small to begin with. It will work well.

I love that it’s a onesie instead of a t-shirt. Much more apt to stay tucked in!

There’s two designs. I happen to like this one because the triangles remind me of tepees. 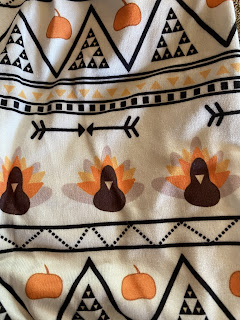 Message:
“Fresh Out of the Oven” is what it says. My niece isn’t super fresh out of the oven, but close enough. She just got home. Her brothers were all happy to hold her. Well except for Emerson, he looked annoyed with her. Lol! 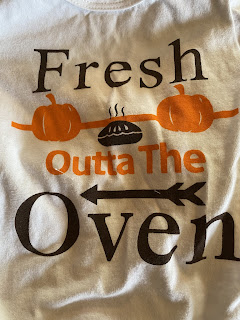 Bow:
I think the bow is cute. It’s not gigantic, like some are.
Where to Get it: 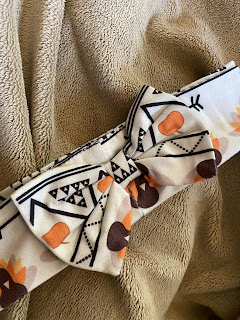 You can get this cute Thanksgiving outfit on Amazon http://www.amazon.com/gp/product/B08FC7D3JV, for $10.98 to $11.98. I kind of feel like there’s not enough difference to make the price change from one outfit to the next.
What do you look forward to, as far as eating goes on Thanksgiving?
Disclaimer: I got this product to review Free of cost in exchange, for my honest opinion.
Posted by An Apel a Day at 7:21 AM 6 comments: