Mica's on spring break. I've heard him say, "I'm bored!" I don't even know what the summer is going to be like. This would be one argument for year round school. I can think of many arguments for no year round school as well! Luckily one of our community centers has a day play camp that we're going to send him to. They only asked for a donation for him to attend. Then we're going to see about a few summer school options. Fun classes, not boring drawn out classes.

Really Mica and Isaak are pretty good kids; when they are separated that is. Their teachers love them.

When they are together it's Kung Fu fighting, they like to try and out run one another and chant, "I'm faster than you! I'm the Gingerbread Man!", of course toys get fought over as well. They are typical brothers. Our boys have a lot of all boy in them. They let the neutering side out once in awhile. Mostly it's rough play!

Yesterday was no exception of this behavior. They were at Grandma and Grandpa's house. I got a pretty downer report when I went to go pick them up. I tried to hurry them out of there. I knew Grandma and Grandpa were done with children for the day.

I went inside to go pick up Mica and Isaak. Mica says right away, "That toy that Isaak's holding is mine. Isaak is not to share it!" Then Isaak threw it at me. I collected it, and refused to give it to anyone. The TV got shut off and Mica threw himself on the floor. I could see Isaak doing this, but with Mica it sort of surprised me. I grabbed them and off we went. Then I had a talk with them in the car and Daddy had a talk with them at home.

Daddy thought we should take swimming away. I thought it was something we should do. Part of why they were acting up is: A) It was raining, so getting outside to run all day just didn't happen. Activity for our boys is something they really need! B) Isaak didn't get a nap. He's weaning from naps. Isaak's a punk a monk when he doesn't get a nap.

I told Mica, "When I tell you it's time to leave, you get up, grab your stuff and leave." Then I asked Mica, "Why in the world did you throw yourself down like that Mica?" Mica said, "Because McDonalds makes me crazy Mom!"  I don't know if he was  referring to the happy meal toy that they were fighting over, or the food that never breaks down?!


So Mica gets no McDonalds, Burger King, Wendy's and so on because that type of food, the toys that come all packaged and kid advertising friendly, makes him crazy! That's fairly easy to take away. Grandma and Grandpa were told, "No McDonalds for Mica because it makes his behavior crazy!"I don't know how long Mica won't get fast food. If we need something quick Subway or some other place will have to do.

Part of me feels like a horrible parent when my kids act up. Then I have to remind myself that our kids are people to, they have their moments, their bad days, stages and moods. I know we are far from being perfect parents. As long as they are not consistently kids with problems I think we're doing an ok job.

One Boy Always Wants a Stick, While the Other One Wants to Model 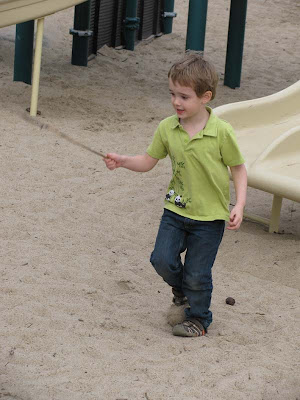 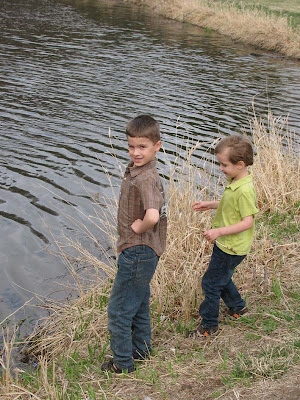 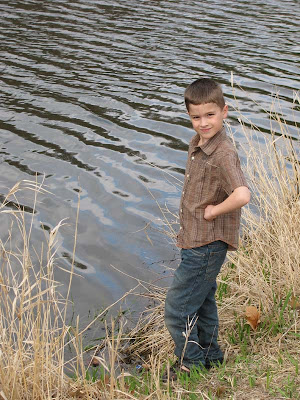 Isaak has a funny thing that happens just about every week at swimming lessons.

A few weeks ago he didn't like his "Teacher" Swimming Coach because he wasn't wearing goggles. I always tell him, "You do to like him! It's not nice to say that you don't!" He doesn't say anything else after that. He does like his coach!  He also doesn't like Daddy, Grandpa, Grandma and I for this or that reason. All people he cares about. I imagine it's a three year old's only way of expressing what they think.

Last week Isaak got really bothered by the fact that one little kid was wearing a swimming shirt! Now that Mica and Isaak's swimming lessons are at different times, we spend time watching other kids swim and reading books.

It went on a little more than that, but you get the point.

I won't be buying a swimming shirt for Isaak anytime soon. It's a good thing we swim indoors.

I wonder what will get him worked up tonight at swimming lessons?
Posted by An Apel a Day at 12:57 PM No comments:

When we had Mica's conferences I met the boys up at Mica's school. Well I didn't know they walked. I had stuff I bought from the Easter Bunny in the vehicle {not hidden well at all}. After conferences Daddy said, "Ok get in the Pilot." Mica saw everything. Today I'm returning it all.

Instead Daddy picked up two $25 ukulele's. Isaak's been asking for a violin. Mica thinks he knows how to play the guitar.

They both think they are Kung Fu Masters as well. For some reason watching Ku Fu Panda, makes them proficient in Kung Fu.

We talked to two people that teach ukulele lessons and asked what to get them? They mentioned the ones Daddy got {which were on the cheaper end}. They are tunable.

I got Melissa and Doug garden tools for blogging around Christmas time. They are the line below. Imagine a few more tools. 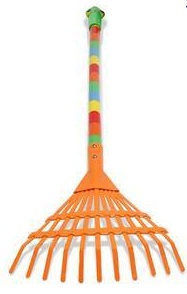 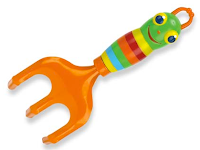 Gee, can you tell I'm a toy hoarder?  I pull them out for random occasions as presents. I usually don't hand over my blog winnings or earnings. I stash them away for special times.

I'm only getting the boys a little candy this year. The rest will be Annie's Bunny crackers. They have different flavors. The different flavors will go in different colored plastic eggs. We'll still have a scavenger hunt. The Easter Bunny hides in one special egg a clue for the next spot to find many eggs. They have to think to find them. The boys dig that! An example of a clue is: "Rub a dub dub 5 eggs are hiding in the ____." This hunt usually happens the night before. I have trouble thinking ahead. I get confused as to what eggs go where. It's better to be creative and spontaneous the night before. I might even make a few nests that look like this for the final prize.
Posted by An Apel a Day at 10:08 AM 2 comments:

A Win Win With Tea

Go Graham Go is hosting a giveaway for Tea Collection. I seriously could buy out the store if I had the money. I love their clothes that much!

I got Mica this shirt on clearance: 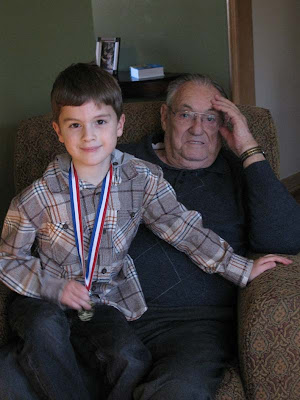 Along with a few other things that will fit later on. I love that their clothes will last from one kid to the next. A lot of times I buy good quality shirts from places for Mica that will in return get handed down to Isaak. As far as pants go, I buy them at Target or on the clearance rack wherever. In the past I have spent money on pants and I tell you what, it doesn't matter. They wear the knees down. Somehow, someway, expensive or not they get holes in their pants.
Posted by An Apel a Day at 8:43 AM 1 comment:

Day Out With Mom

Today I was bound and determined to stay out of the house. Yesterday I was cooped up in the house all day. Balance is good, right? Not only that, but Daddy sort of kicked us out. He worked LATE last night and LATE tonight just so he could cast some sculptures today.

I took the boys to an unfamilar park. They ran and ran. Each one pretended they were the Gingerbread Man. 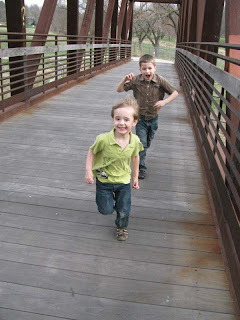 Then we went shopping. Trying to get boys to try on clothes is interesting. Especially when it's trying clothes behind a small curtain, like in Gymboree. For some reason they wouldn't stop laughing and dancing mostly in the buff behind the curtain.

I wanted to get their pictures taken at Picture People, but I called and cancelled. Mica has a front tooth that is so loose, it looks like a wooden peg hanging out of this mouth. Isaak has a cold sore or something similar below his bottom lip in the corner. I was sick yesterday, so I wasn't in the mood for picking out what they were going to wear. Another day, another time for pictures.

We ate lunch at Wendy's.

We went over to Aunt Terra's house to A) Deliver Emerson his new sunglasses! I did a review of Baby BanZ here. 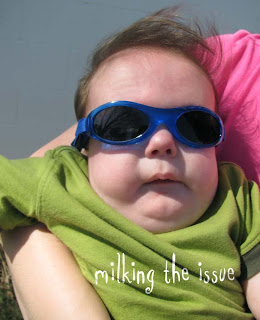 B) The boys wanted to play with 2 of their other cousin's Elijah and Evan. So they did for a good while.

Then we went to a cheaper movie Hugo. Both boys got into it, but it was way too long for them. It was also way over Isaak's head. He kept asking me questions all the way through it. They must of liked it though. They wouldn't stop talking about it at dinner. They were both trying to tell Daddy what the movie was about; it was funny. Isaak was all over the place with his explanation of the movie. They were over talking one another. Then Isaak would get mad because Mica wouldn't let him talk.

Here's a video of Isaak and Cousin Elijah figuring out the alphabet. It was so cute!


One of Natural Baby Goods  readers is going to receive the same Letter Construction Activity Set from Learning Resources as pictured above!
Posted by An Apel a Day at 8:55 PM No comments: