What Did I End Up Bringing for Thanksgiving?

Thanksgiving went really well - except for the fact that Mica's eyes got all red from the cats. How I wish he didn't inherit that from me. I'm lucky my cousin is a pharmacist. I asked him if he could have 1/2 my Singular I had on me for an emergency. I'm still trying to take no allergy medicines. I was just getting immune to them. I seriously feel the same off them as I do on them. Mica could in fact take 1/2 my Singular, and a small dose of Benadryl. That took care of his eyes. He went on to play, and had a great time.

I did take a photo of my veggie tray. Dad said that I already made enough things, but I wanted to make a veggie turkey. I bought a turkey craft set at Michaels, and used it for the tray. I cut up everything, and let Isaak place it around the blue plate. I always like using the big blue plate because it was my Grandmother's. 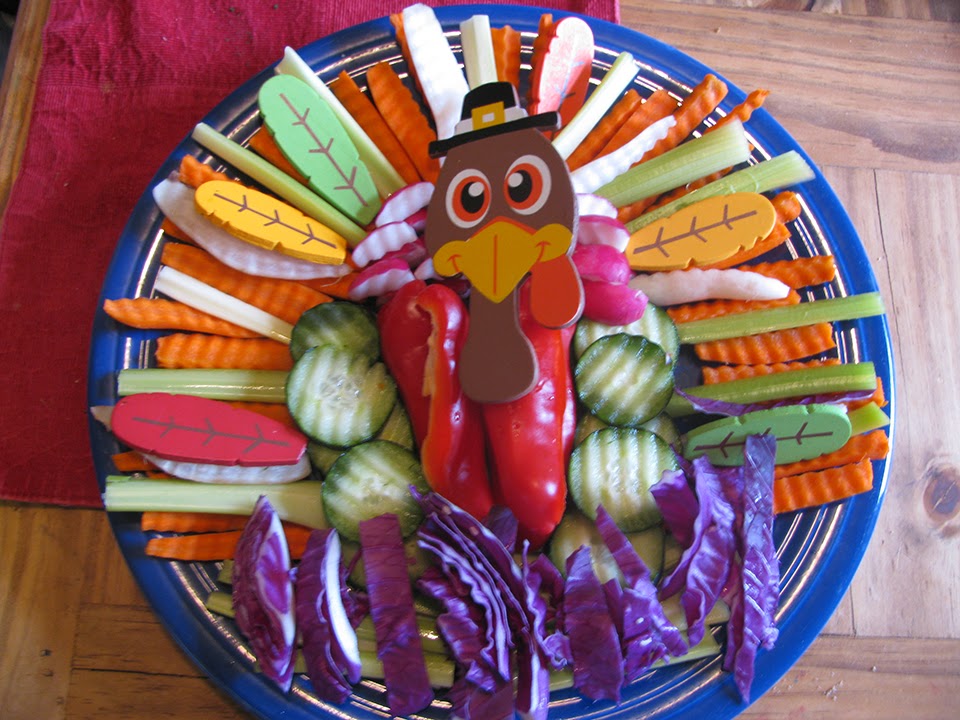 I know my aunt that hosted the gathering loves squash. No one ever brings it, so I did. You can find the recipe here. I made it the same way, except peeled and cut the squash ahead of time. That way anyone could dig in without eating 1/2 a squash. I also replaced the brown sugar with coconut sugar, and did 1/2 pumpkin seeds and 1/2 sliced almonds. The below image looks pretty, but it isn't practical to eat the squash that way.

This is a photo from last year. I did just pilgrim hats this year with Kebler stripped cookies, and less piping. I actually liked them better this year. They were cleaner, and looked more like hats. No they are not good for you. I was expecting to have a lot of muffins left over, but only had 1 left. There were pies galore. 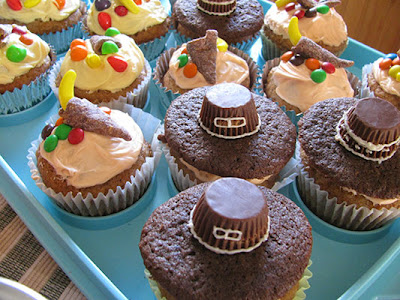 I also brought a bowl pomegrante seeds, which Isaak and I love.

The kids played with my cousin's kids. I talked with my aunts, my 1 girl cousin, oldest sister, and mom. Dad watched TV, and talked with my guy cousins. It was a good time.

It was freezing out, and the boys still played outside.

We got home at 7:15, and Mica put himself to sleep soon after. He had a food and drug coma going on.

How did your Thanksgiving go?

I didn't do the Black Friday Shopping this year. We set up our Christmas tree instead. I even have a few gifts wrapped under it.

Did you shop on Black Friday?

I'm writing this on Monday so I can enjoy my Thanksgiving weekend. I hope you are enjoying yours!

Email ThisBlogThis!Share to TwitterShare to FacebookShare to Pinterest
Labels: thanksgiving

WW: The Start of the Christmas Season {Linky}

The 4th time we went to take family photos for a postcard. The shot I was going for was complicated. This isn't the shot. 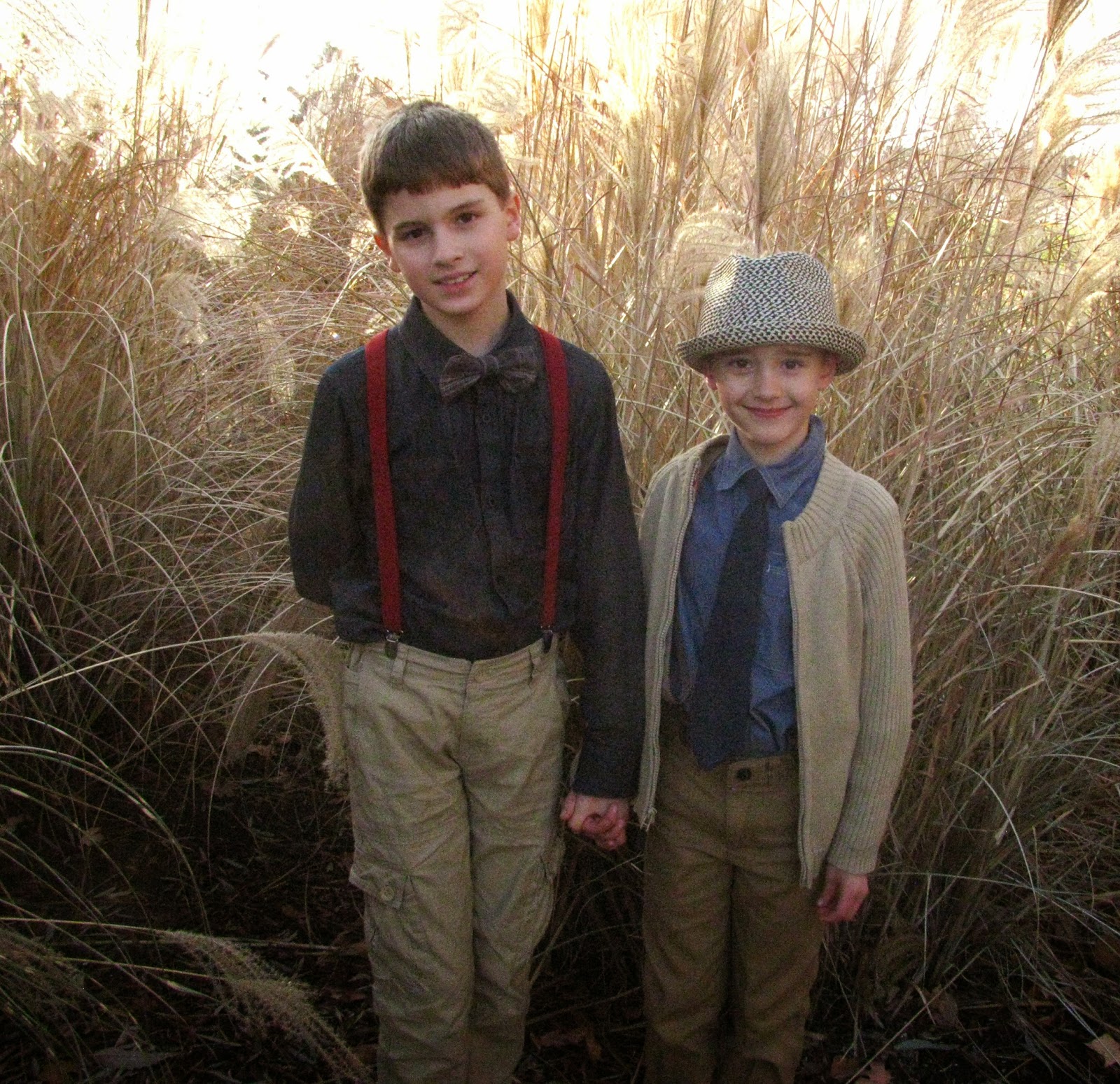 Checking out Santa through a glass wall at the mall. 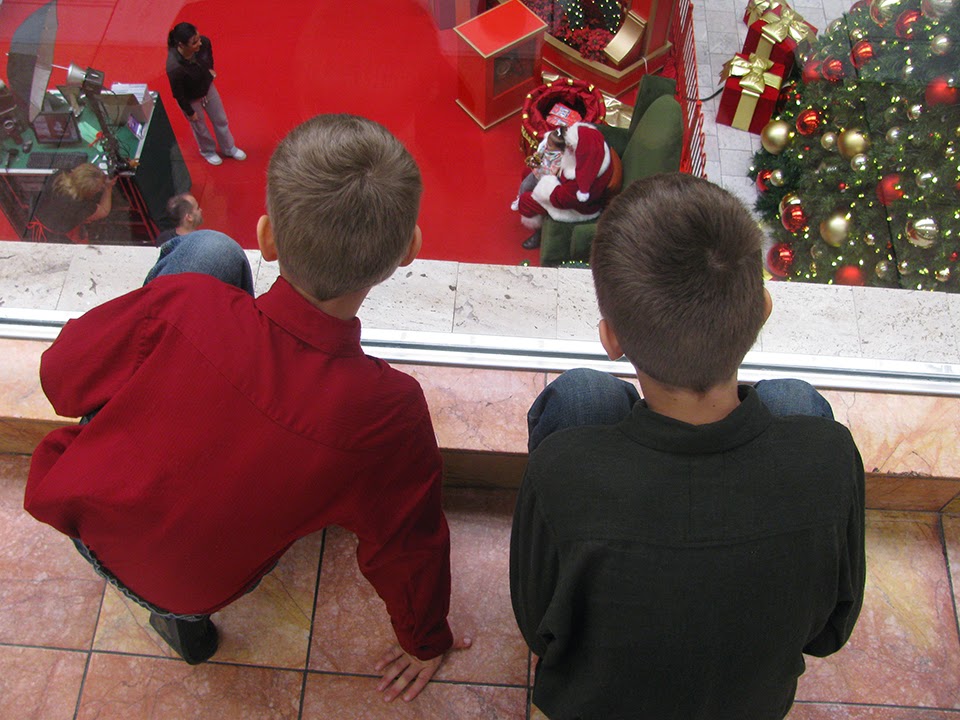 After they saw Santa. *We'll get Santa pictures at Bass Pro Shop later on. 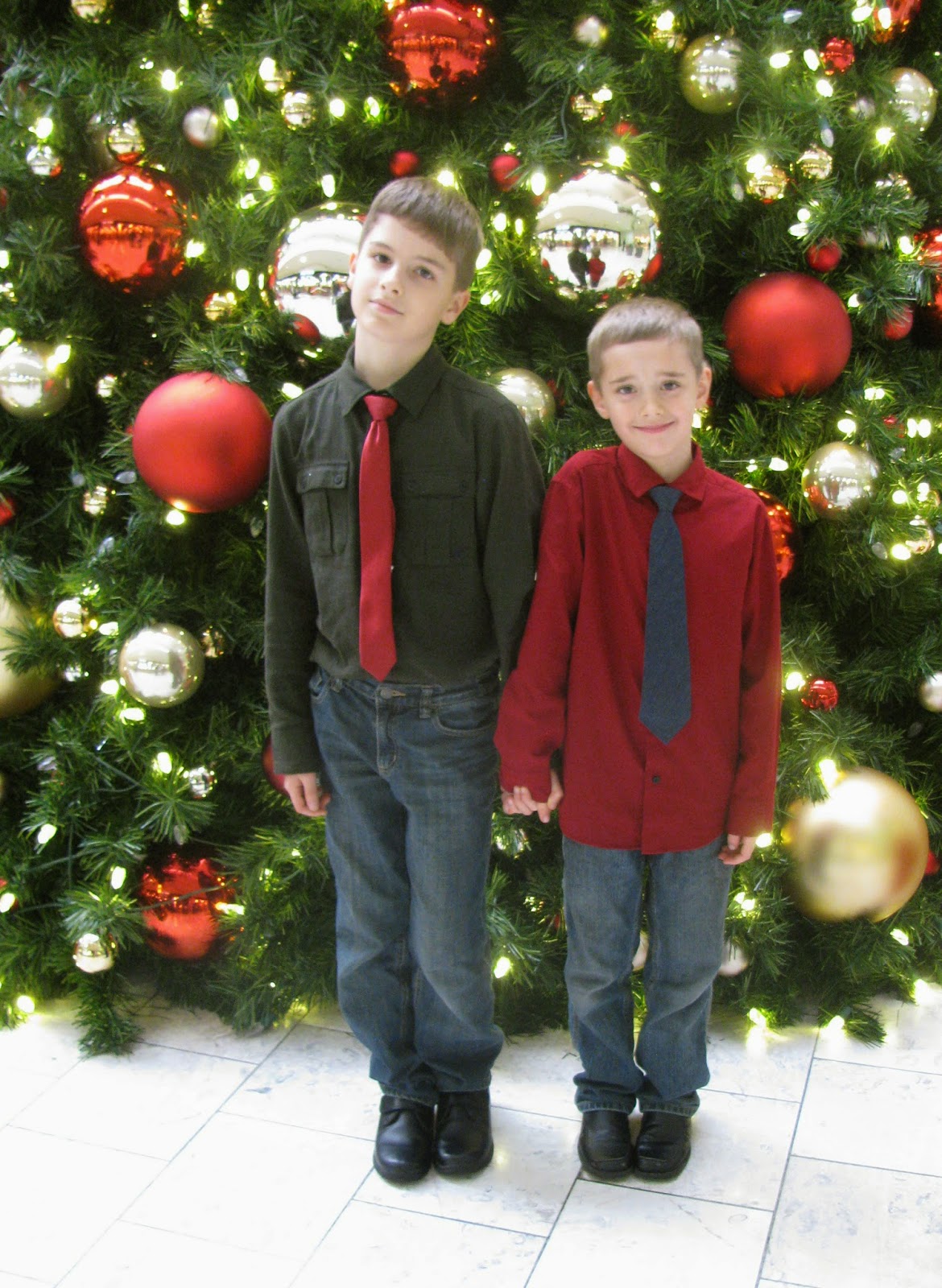 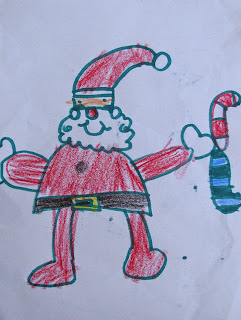 If you'd like, I have a few low entry giveaways: One is to win a custom puzzle and the other is to win a set of soy candles.
Posted by An Apel a Day at 3:40 PM 13 comments:

Email ThisBlogThis!Share to TwitterShare to FacebookShare to Pinterest
Labels: Christmas

So...I didn't know if I'd want to get on the Elf on the Shelf bandwagon. It looked fun, but it's just one more thing to do.

If you aren't familiar with Elf on the Shelf it comes with a book that explains how the elf watches what the kids do, and reports back to Santa. The elf comes to live at night and does things around the house. Kids can not touch her, or she looses magic.

It's kind of creepy if you think about it. The kids only think of it as being fun though.

One of my friends that lives in Omaha was giving one away on her FB page. I entered thinking, Why not? It will be fun.

Welcome Brita to our family.

When I found out our little elf was a girl I was excited. Finally another girl in our family. I told the boys, "I won her, so I'm naming her." One of my great grandmas was from Sweden. Her name was Brita. My youngest sister was almost named after her, but ended up being Terra instead. It's a good thing because shortly after she was born Brita Water Filters came out, and were the rage. Everyone had to have one. Now that trend has died down a bit. I think it's safe to name our elf Brita. 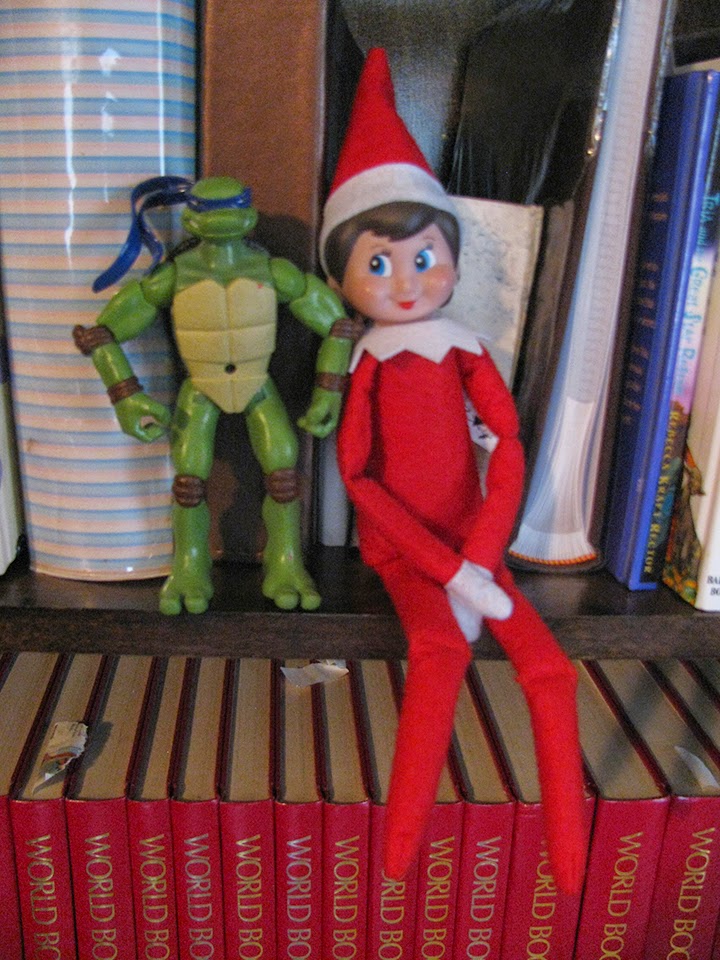 Right away Mica had to read the story, and fill out Brita's name in the book. I set Brita on the shelf. Mica put a TMNT up by her because she was lonely - so he said.

He then proceeded to talk about how the elf isn't real. I took him into my bedroom and said, "If you don't think the elf is real, that's fine. Think that. Just don't mess it up for Isaak." - He's been quiet about that ever since.

I was going to check out all the clever things that people have done with their Elf on the Shelf online. It just so happens that so far I've followed my boy's creative leads.

Night 1: Leonardo carried Brita to the TMNT notebook that was left out. 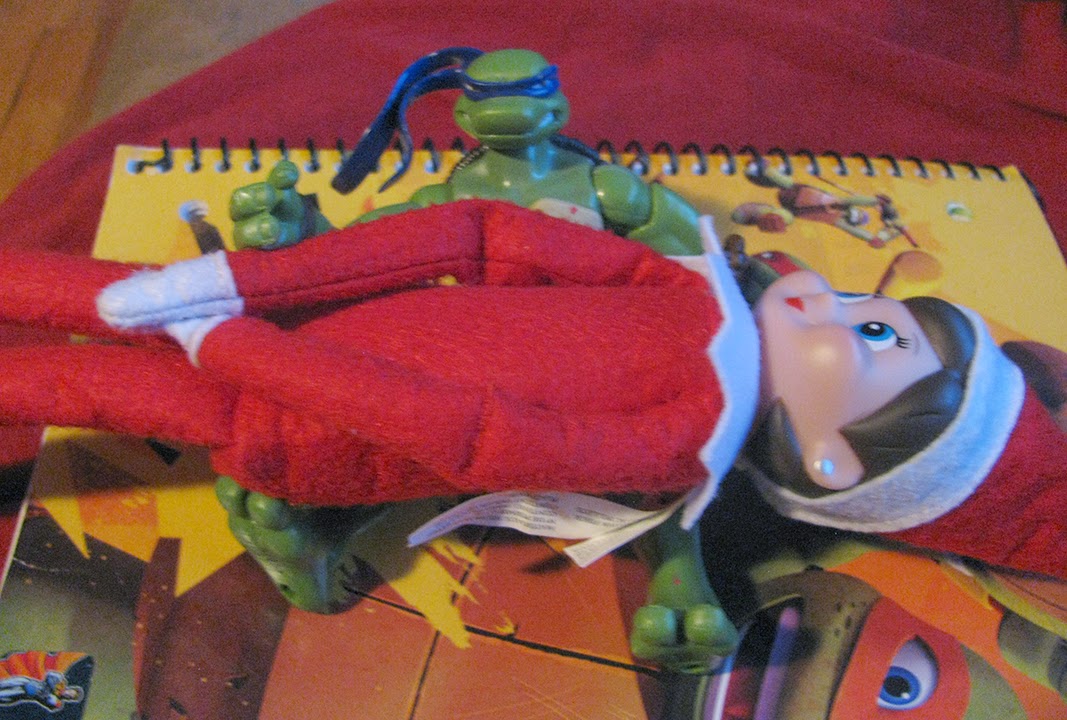 Night 2: Brita read the boy's notes, and responded to them. She cut the envelope open with her tiny scissors. *The paper shredder did that. 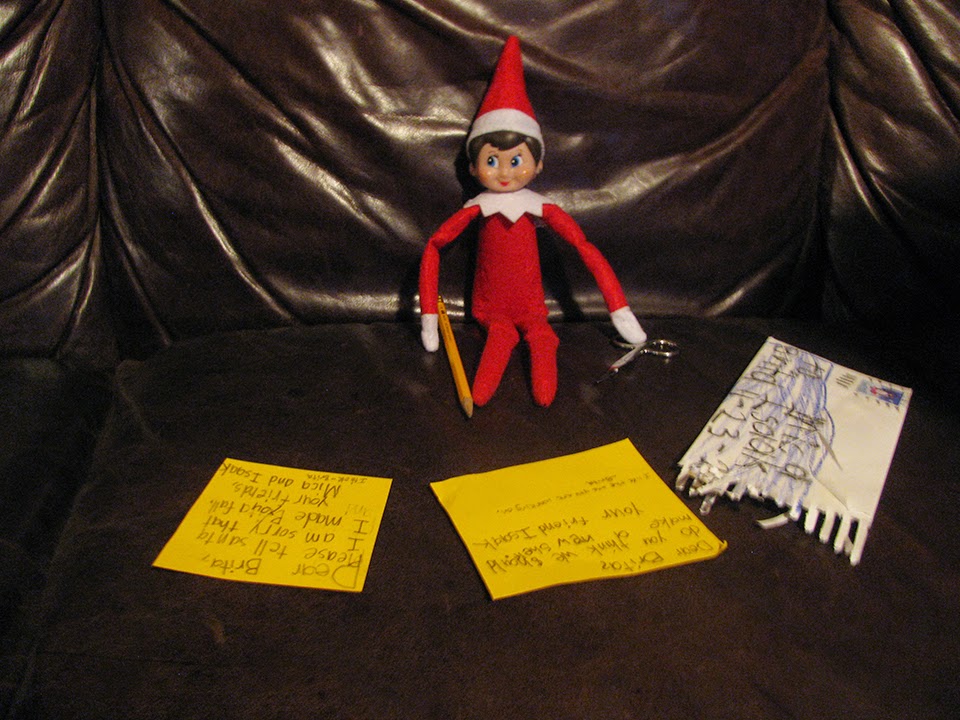 Much of the day yesterday the boys spent time making Brita a special home. It has a bed, an outhouse, and a roof. *I'm sure in the future that house will have Christmas lights that will show up on it.

My friend that I won Brita from has an extra skirt that she's giving to us. :)

So far our little elf Brita hasn't been a lot of work like I thought she'd be. Isaak wants to get out of bed to see what Brita has been up to.

Daddy rolls his eyes whenever the boys say, "Dad come check out what Brita did!" I call him a Scrooge.

Isaak lost a tooth last week. I feel asleep without taking care of the Tooth Fairy duties. Daddy dropped some change in Isaak's box. He didn't leave a special dollar with Fairy dust, or a little note like she did last time. Isaak woke up, and was all disappointed. He left her a necklace, and a bead. The Tooth Fairy didn't thank him.
Posted by An Apel a Day at 9:16 AM 9 comments: