On Thursday Mica pleaded before school that he NEEDED a new jacket.

On Saturday I said we had to go out to get a jacket. All the sudden he didn’t think he NEEDED one. He was adamant that he wasn’t going out. It turned into me saying, “You told me a few days ago that you NEEDED a jacket. We’re going to get a jacket.”

So off we went, with a huffing and puffing teen in the car.

The difficult thing with Mica is that he has a long torso. It’s impossible to find a jacket to be long enough for him.

We went to Old Navy, H&M, and about 5 more stores. Finally he landed in a jacket on a jacket that still isn’t quite long enough. 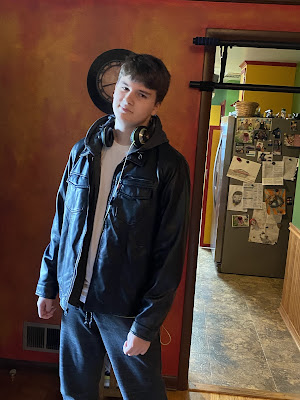 Then I got to listen to Travis about how Mica should just use one of his jackets. He said, “Did you have him try on an XL, so it would go down longer?” I said, “It is an XL. An XXL wouldn’t be any longer. Just wider.”

Sometimes it would be nice to have just one other girl in the house. I’m not a shopper, but I don’t like to argue all the time about getting things.