I'm kind of later than usual posting something. What can I say? We've been busy.

You've probably never heard of him, but he's been featured in Guitar Magazine, has two national awards and has the sounds of The Doors, Led Zeppelin, Dylan and Bob Marley.

I've never listened to just guitar and was entertained by the sound. Guy Buttery does have 4 albums you can  download off Band Camp.
Posted by An Apel a Day at 9:03 PM 3 comments:

How Do You Remember People?

My Grandma passed away last week. I wrote a post about my memories of her. The good memories. I posted about what I remember before she got sick with Alzheimer's disease. I was hoping some of my family members would read it. I think we got so hung up on taking care of someone that forgot who we even were, we were ready for her to pass. We didn't like seeing her suffer. Remembering her for who she was, is important to me.

As it turns out my Mom wants a copy of my post to be at the funeral tomorrow. My sister Terra added additional memories.

We had to skip out on the wake. The small town has a fall festival going on. Only 5 hotel rooms were available due to a cancellation. My Mom, my Aunts and my cousin coming from a ways away need the rooms. My Grandpa is staying with his brother that lives there.

My sister Terra reminded me that Grandma always had hard candy that she offered to us in the car.  Her favorites were coffee candy and rootbeer cany.

I bought something I haven't bought in years (hard candy, the coffee kind to be exact) just to bring for the funeral. It's not the same brand that she used to buy. I wasn't going to drive all over town looking for candy. I'll offer one to my cousins. We'll see if they remember Grandma's coffee candy. We're the older cousins, so I'm not sure what the others will remember.

As far as coffee candy goes, people either love it, or hate it. Like I said, I just don't buy that kind of stuff, but I have had it and I love it. Maybe I love it because it reminds me of Grandma. Maybe I loved it as a kid because I felt like a grown up having coffee candy instead of coffee the drink. It was a sophisticated treat for a kid.


So what do you do to remember people? Do you look at old photos, read old letters, stash thing that they used to have, or something else?
Posted by An Apel a Day at 9:38 PM 5 comments:

Today I Stepped on Acorns

My little crafty Isaak has so many boxes, paper and stuff on his floor. He keeps telling me, "Mommy I'm making something! Don't make me put it away!" The thing is, is I believe him. Usually I would make him put it all away. We haven't had time for him to energize his crafty ways.

Today I was putting away his clean clothes and stepped barefoot on a few acorns. I think that hurt more than stepping on Legos! 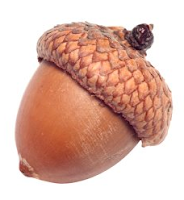 I picked up his beloved acorns and threw them away.

Then I got on the computer and got an email to make these gems:


Now I feel guilty about throwing his acorns away. It's so odd how I get emails like this craft right after I got rid of them. Things like that have been happening way too much.

So how do you make these acorn gem caps?

Simple! Color them with colored markers, fill them with Elmer's glue, let them dry and you end up with pretty acorn gems. An easy, yet beautiful craft.
Posted by An Apel a Day at 8:33 PM 4 comments:

Isaak went to preschool last week. This is his second year. Since we both work, we don't deal with daycare, we need to keep our kids busy. Isaak loved school so much last year he asked everyday, "Can I go to preschool today?" This year he's in 2 different schools, 2 days each. It's only for a few hours each day. I think he'll love it. 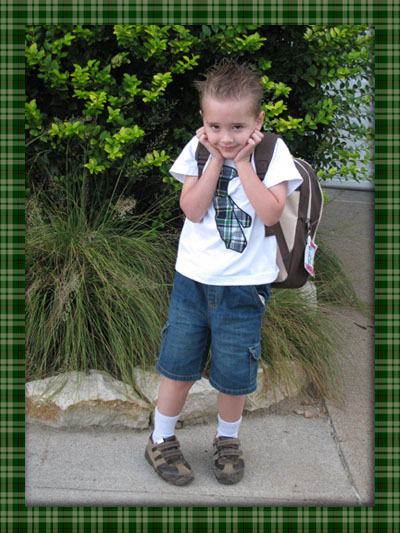 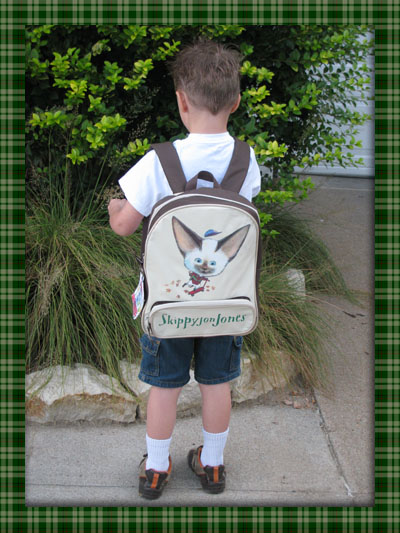 If you have a moment enter my Bumble Ride CD Giveaway.
Posted by An Apel a Day at 3:26 PM 20 comments:

White As Can Be

Mica was invited to Fun-Plex this weekend. It's a small amusement park. We've had bad parent luck, so Daddy insisted that I go along. I'm glad I did. The other Mom had her daughter that was only 3 years old along. She of course wanted to go on different types of rides than the bigger boys.

Somehow I ended up with the bigger boys. It was all good except their 2nd grader ran off twice. He knew a lot of people there. It made me nervous. I had 3 other kids with me. Mica's been known to run off, but with a lot of people he now knows better.

It was some type of fun raiser for their culture or religion. I missed the memo on that. I'm not sure that it mattered. The boys had a blast.

They are from Africa, so language wise the mom was hard for me to understand. The kids were easy peasy to comprehend. The boy that's in Mica's class kept saying, "Fun-Plex is the bomb!"

Mica's friend likes Mica a lot. He actually drew him as his best friend last year for an art project.

At Mica's birthday party their boys were the best behaved kids. They helped me pick up and they were good with Isaak.

Mica's in between their two boy's ages. Mica went to school and turned 6 right away in August. Some of the grade above him he's friends with as well.

I took them on rides and more rides. 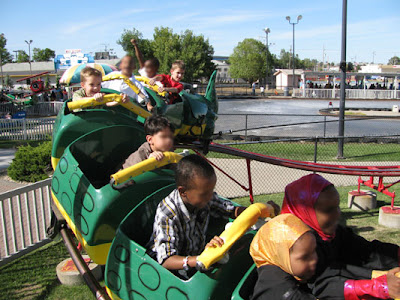 In the photo below, do you see the roller coaster behind the kid roller coaster? Mica was upset that I wouldn't allow him to ride that. All the other kids were shorter than Mica. They couldn't ride it without an adult. I didn't think Isaak was at all ready for a ride like that. The other kids didn't want to ride it. I didn't want to wait for the long line. I heard Mica wine and complain about not getting on that bigger roller coaster off and on the rest of the time. 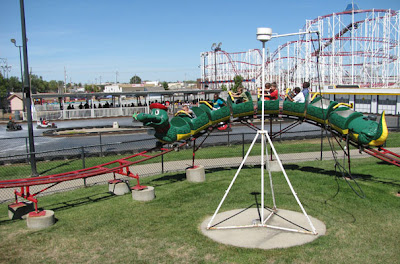 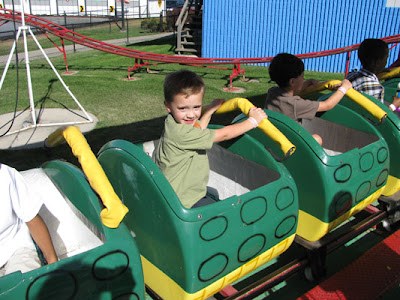 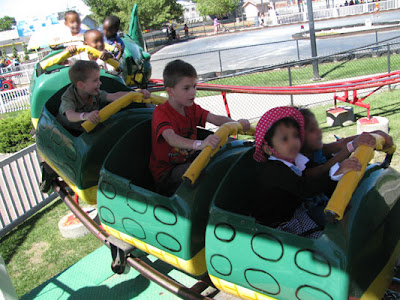 After a few rides, it was time to eat. This is when our little family stood out because most everyone under the pavilion was dark skinned. Mica looked at his friend and said, "How come you are friends with me? Don't you know I'm as white as can be? I'm glad we like each other."
His friend just shrugged and smiled.
Most of Omaha is Caucasian. I actually really like that Mica's school is diverse. 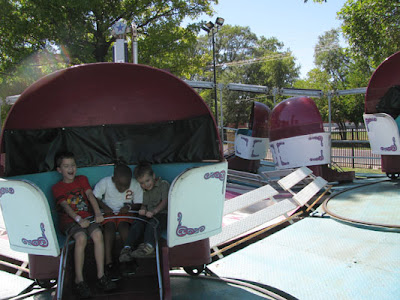 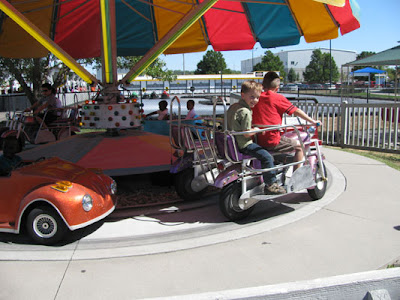 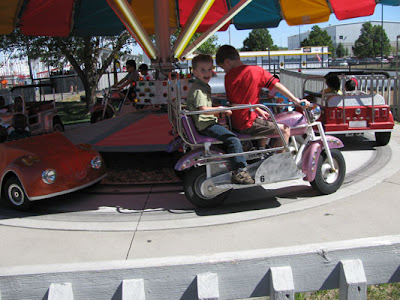 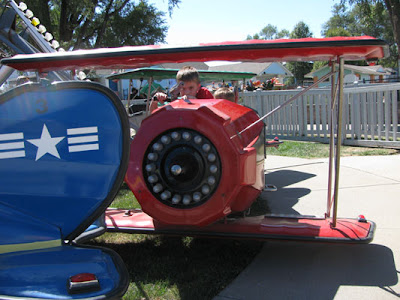 All We Needed Was New Soap

A few days ago we ran out of hand soap. Well I've been buying refill soap for quite some time now. Our soap bottle hasn't changed in a long time. I've been trying to be more green. I suppose if I was really green I'd make my own soap, or buy organic. No one is perfect. I have to say that I'm one of those consumers that get locked into sales and coupons so much. We love coupons. Isaak's job is to cut them. Then the boys each get coupons to look for items in the store. It makes the shopping experience so much better because they have something to do. Daddy tends to roll his eyes at coupons.

I decided to change soap bottles. I cleaned the old one over and over again on the outside. It was time for something new.

Daddy changed it out. This made for one happy little kid! Isaak was so excited to be washing with new soap.

Isaak said, "WOW this is blue! I love blue! Where did you get this Mommy?"

Before I could answer he kept on talking.

Isaak then said, "Oh WOW it has speckles in it to. That's so COOL Mom!"

It's the little things that make me smile.