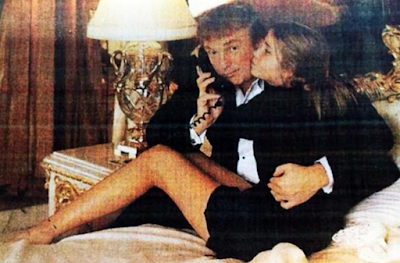 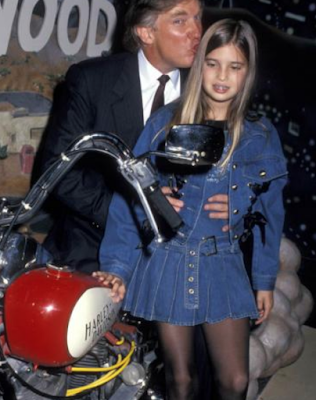 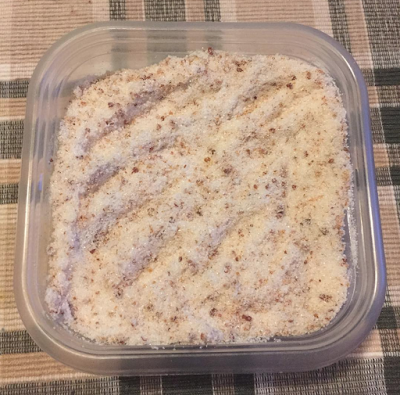 My boys go to a Leadership Camp that's way North in Omaha. They've gone for many years.

This is shortly after they started. They look so little. Isaak's now almost 11, and Mica's 13 and 1/2. Mica's taller than I am, and growing an unfortunate mustache. 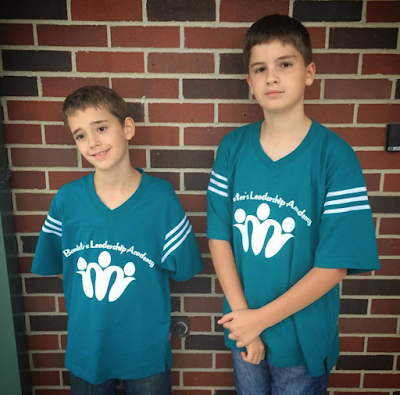 The head of the program really likes our boys.

We've gone back and forth from loving the program, to thinking our boys don't fit or raise questions about how it's run (the staff has high turnover because it's Saturday nights), and back to loving it again.

Truth is, I love our one night a week without the boys, how they get a taste of being the few white boys among many dark skinned kids, how they can pass on their leadership skills to those that struggle with them, how they made Isaak research a different culture each week, talk about budgeting, and want Mica to work for them when he's old enough.

It's a nonprofit organization, so we always have to fill out paperwork on our kid's behavior. It's hard because Mica's been in the program, but we've struggled with him because he's in the thick of puberty. He's a good student, and we have our good days, but he's not a task/hands on kid. That's where we struggle.

Isaak took a break due to basketball, and he's been great at home.

Their paperwork probably wasn't all that they wanted it to be. The program hasn't made Mica better. In fact they think he's great. Ask him to do the dishes at home, and it's a struggle.

We had a family night, which we all hadn't been there for awhile.

On With the White Boy Privilege:

We gathered to eat dinner, for family night.

I had donated slotted spoons to the organization because the older team leaders that are just slightly older than Mica would serve the wet green beans with regular spoons.

Mica said, "The bread is soggy, and the chicken is sloppy."

I said, "What's wrong? You always eat your food. A little slow, but you still eat it."

Isaak said, "Mom I can't eat chicken that looks like that! It has the bones showing!"

I said, "What can I tell you? Chicken looks that way. I just get it boneless skinless because it's easier, and doesn't stink up the trash."

Isaak said, "Mom I can't eat food that has the skeleton showing!"

Travis said, "I'll eat it! Why won't you eat your green beans Isaak?"

I said, "Because they aren't fresh green beans like I make. They are canned green beans. My guess is, is that he won't eat his fruit cup, or plain bread either. The fruit is in a liquid. He's used to fresh fruit. He's used to having jelly, jam, honey, or peanut butter on his bread."

I was right! Isaak went without eating.

I said, "What are you going to do when they start the new tier you're going to be in?"

Isaak said, "Eat before I go."

I said, "I don't think so. You're just going to have to get used to chicken on the bone."

Travis said, "I think we'll be buying that way, so he can get used to it."

I never really thought much about being privileged as much as I did that night. I have to admit that "Skeleton Showing" on his chicken is pretty funny. We're middle class, but I certainly feel privileged when we're there.

Is there a time where you felt privileged?
Posted by An Apel a Day at 3:36 PM 3 comments:

I had a thought one day...to make Mexican Chocolate Chip Cookies. 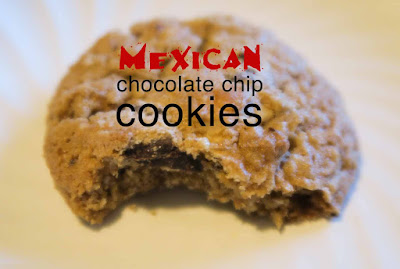 Why haven't I heard of anyone making spicy chocolate chip cookies before? We have Mexican candy that's both sweet and spicy. Their hot chocolate is the same.

Travis helped me figure out what to add. He's quite a bit Mexican, so I trust his judgement. I didn't want to make them too spicy. 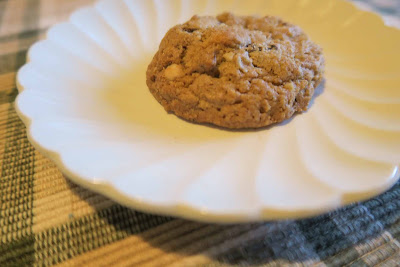 Travis, Isaak, and I all love them. Mica said, "Do you have to keep putting cayenne pepper in everything?" I have to admit I've been putting it in a lot of dishes to help clear up my sinuses.

I made the Mexican Chocolate Chip Cookies for reals! To me they are amazing. What if say someone at worked picked one up to eat, not knowing they were spicy?

I'll be making a second batch very soon, to send off to the places where we work. They LOVE my cookies! Some may or may not like the Mexican Chocolate Chip Cookies.

This is when I want to say, "Man up, and eat the flipping cookie! Go outside your box you smuck!" In all reality I know not everyone likes spicy things.

If you like spicy things, or just want to play a trick on someone here's the recipe to Mexican Chocolate Chips:

1. Cream the sugars with the butter and eggs.
2. Combine the rest of the ingredients one at a time.
3. Crush the nuts before adding them.
4. Spray a few cookie sheets.
5. Use a scoop to put them on the pans. They will spread out, so leave room in between them. 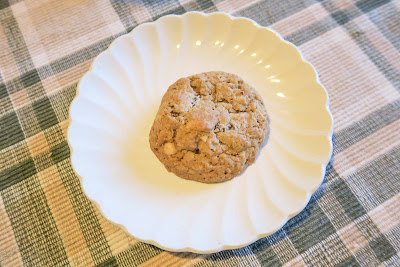 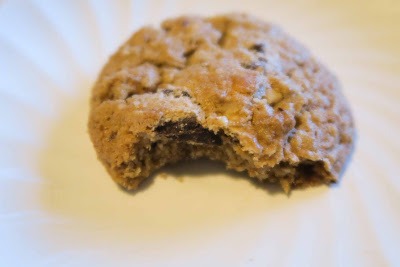 WW: An Icicle and a Sombrero {Linky} 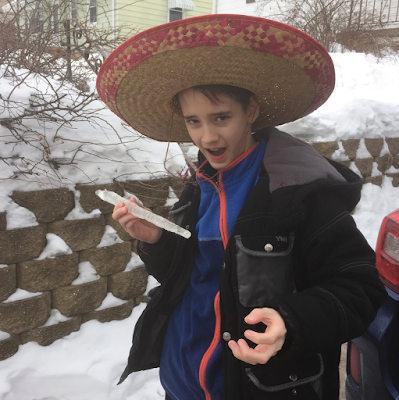 It happened to be hat day at school. Isaak always wants to wear this big sombrero that we have hanging in our Mexican themed kitchen. We found a gigantic icicle. I had to take a picture.
Posted by An Apel a Day at 4:33 PM 6 comments:

On the weekends I usually go crazy by making big breakfasts, so food will last throughout the week. I'm programmed to wake up early, so it works out.

I saw in my cookbook recipes for Cheddar Spoon Bread and Biscuits Supreme. I said, "Why not add the two together?" Travis liked that idea. We made full recipes of each to mix together. That was a ton of muffins. I cut back on this recipe. Each recipe was cut in 1/2. I added other things that were so good in them: Bacon and Green Onions! 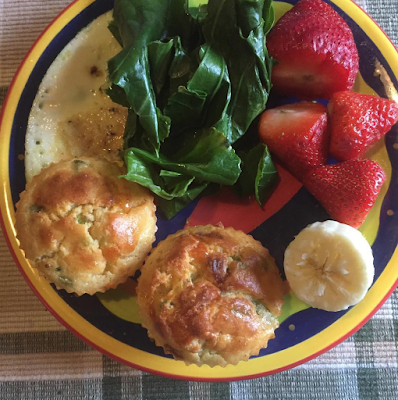 2. Combine the dry ingredients in one bowl.

3. Combine the wet ingredients in another bowl. You will have to heat up the butter.

4. Pour the wet ingredients into the dry. Whisk well. Stir in the extra good ingredients.

5. Spray 12 muffin cups with baking spray. Pour the mixture in them.

Are you a breakfast eater? Do you like big breakfasts, or are you more of a light eater at this time of day?
Posted by An Apel a Day at 11:27 AM 1 comment:

We finally had conferences, for Isaak. They got skipped because of the the snow (all the schools were closed). They postponed them until after spring break.

While we waited Isaak modeled his Safety Patrol - Captain outfit for me. 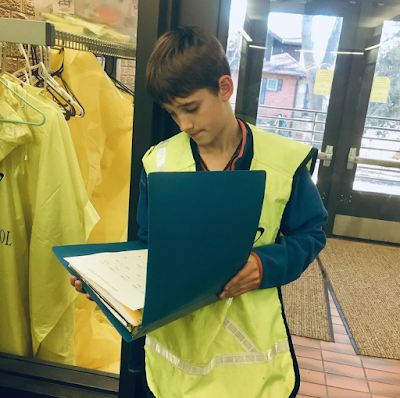 He was quite bummed that the students didn't have new art on the walls to show us. He said, "The kids in my class always get in trouble, so we loose art and recess time."

I would say it's too cold and snowy to have recess, but my friend that lives in Minnesota shows shots of her daughter at recess all the time (no matter what the weather is). She even bought her waders, so she could be in the cold water, yet still stay dry. She looked so happy to be in the natural elements.

It's kind of hard going in to talk to a teacher, when you know it's the worst year your kid has had. There's never been chemistry between Isaak and his teacher. Travis said, "Let's just do this. We all know he just needs to get through the year. He's almost done."

She had a pretty glowing report about Isaak. He is a pretty good kid. She wishes more kids had his empathetic nature.

When she started to talk about how he's a talker in a more negative way, I said, "Yes he does like to talk a lot. Many boys do not. I'm glad he can share his feelings with us. He may be great at presenting when he's older because he talks well."

I tried to turn negative things said into positive things. I get that she needs to tell us what he needs to work on. That's the point of conferences. Tell me something I don't already know. He talks a lot at home too.

Truthfully I can think of many things she could work on:

-Artwork was not changed out from the last conferences

-They still lack on having recesses (only had 1 all week) 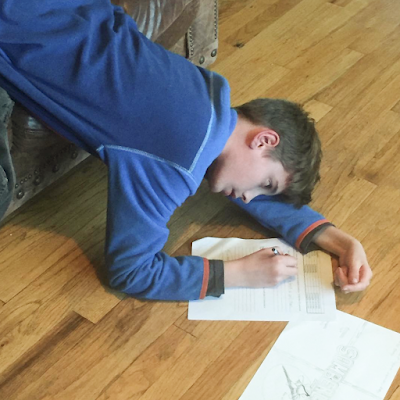 -She just reads out of the Social Studies book, has them take notes (how boring!)

-She's still having them do these crazy word games for homework that are a waist of time in my mind.

Word games that say, "What's another word for brownish purple?" I've taught Color and Design Theory, for years. I had never heard of the answer "Puce". I had to Google search that one. The historical background as to how they came up with that word is pretty gross. It's thought up because it's the color of bug's blood.

Another word game puzzle, "Another word for manure." The answer is "Dung". What 10 year old that lives in the city knows those words?

She does hand out a vocabulary word, has them look it up, and write it in a sentence. I love that!

I usually look forward to conferences. I just want the year to be over.
Posted by An Apel a Day at 4:35 PM 2 comments: