Ripley's Believe It or Not! Shatter Your Senses!

Both of my boys love Ripley's Believe It or Not! books. 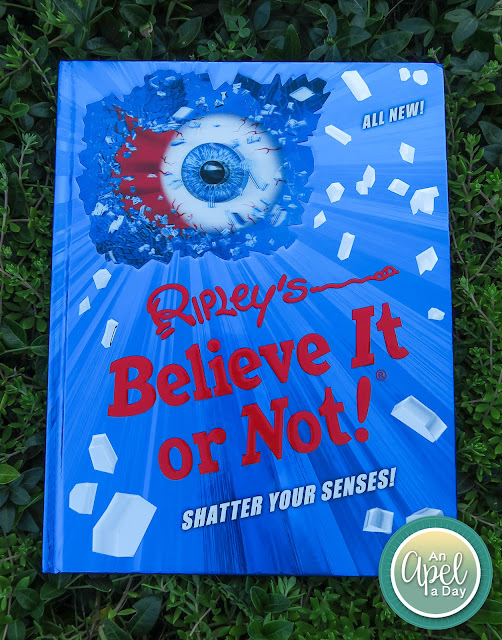 Where to get it:

About the book:
I think kids and adult like this books because they have so much to see in them! There are some things that are freaky, but a lot of things are just fascinating! 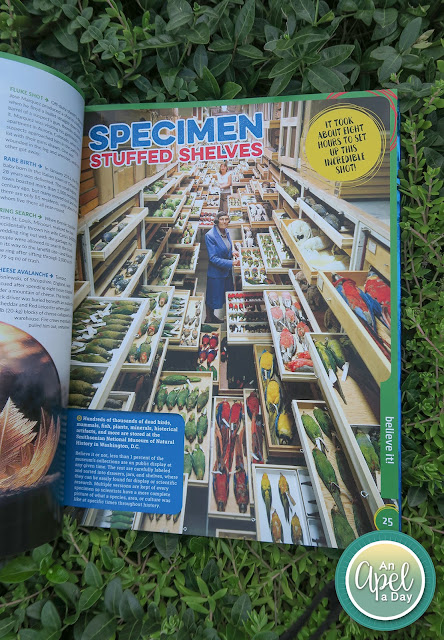 Extreme Extremity and a Misfortune: 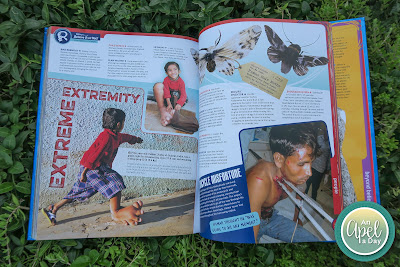 Ripley's Believe It or Not! Shatter Your Senses! is the latest book from Ripley Publishing's wildly popular series that chronicles the most shocking, crazy, incredible and always true stories from around the globe.

I love that the book is for all kinds of ages:
To be honest...when I pick out books for my kids I find that I want to like them to. I still read to my kids at times. I want to enjoy what I'm reading. I like this book! It's a coffee table type book. Everyone wants to pick it up to take in what's inside. 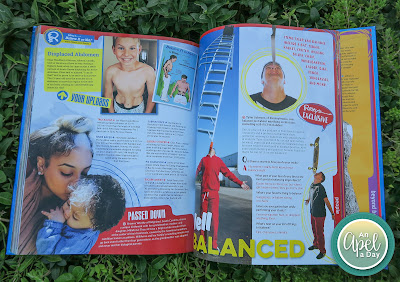 Monkey Love and a Giant Slug: 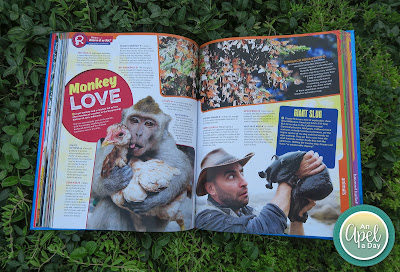 Batter Up and Wax On: 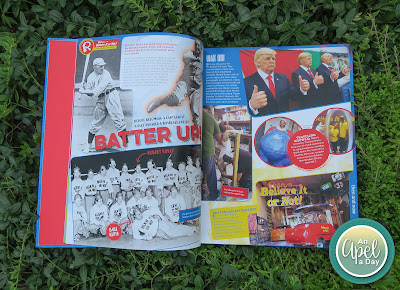 Ripley's Believe It or Not! Wrote this about their newest book:

Experience Some of the stories that are sure to Shatter Your Senses!
It's filled with not just weirdness, but art as well: 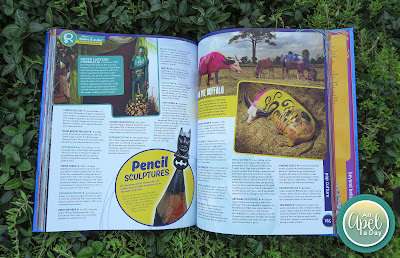 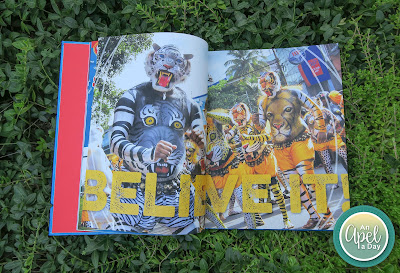 Were you ever fascinated by something that is different?

Disclaimer: I received one or more of the products mentioned above for free in exchange for a review. Regardless, I only recommend products or services I use personally and believe will be good for my readers.
Posted by An Apel a Day at 1:49 PM 7 comments: Links to this post

Email ThisBlogThis!Share to TwitterShare to FacebookShare to Pinterest
Labels: Book, Review, Ripley's, Ripley's Believe It or Not!

We had my son Mica's 12th birthday party this weekend. He got a set of Skull Candy Headphones along with another Fidget Spinner.

Here's my nephew Evan and Mica both wearing a Skull Candy ear bud: 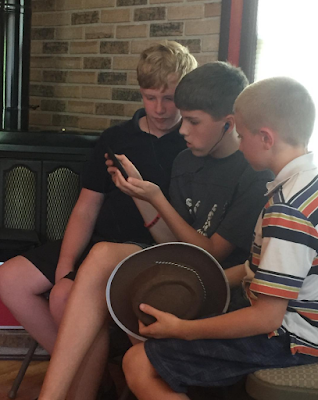 Here's the Fidget Spinner Mica got that my 91 year old Grandpa couldn't put down: 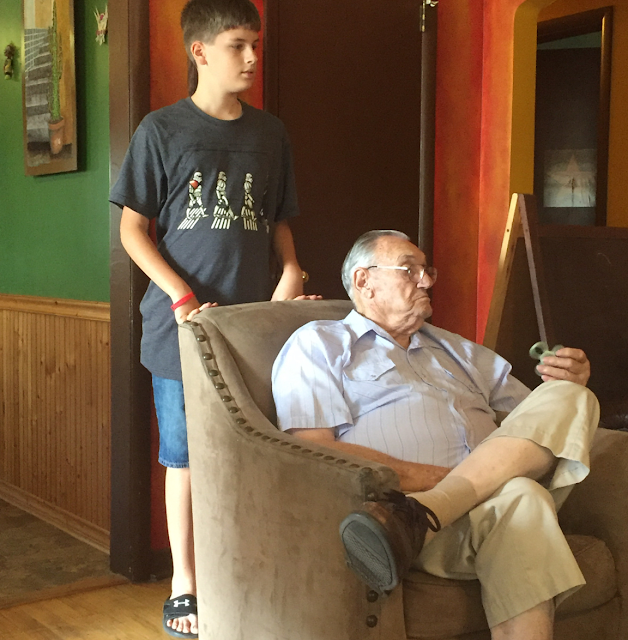 I don't think Mica knew what to do to get his Fidget Spinner back. Ha! 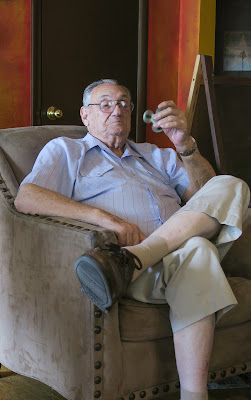 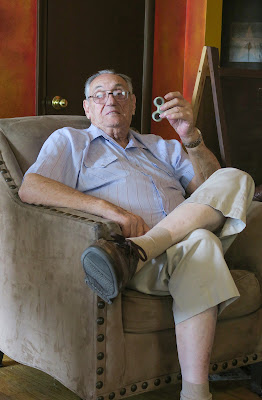 This same birthday party my 3 year old nephew made this Baby Trump happen: 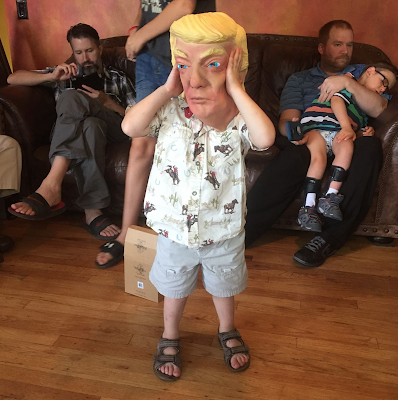 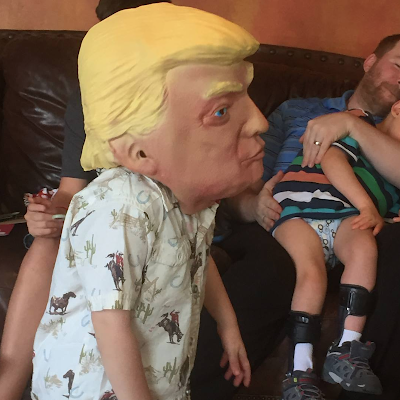 I tend to look for arts and crafts that are great for boys. There just isn't a lot out there. Most of them are geared towards girls.

I was so happy that I got a Sewing Leather Tool Set to review: http://www.amazon.com/gp/product/B06XDMB7H5! It's something Isaak will love for Christmas coming up. I'm going to get him a leather belt to work on. 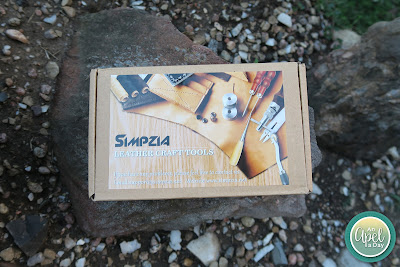 I was thinking it would be a small kit with a few things. Nope! It's really full of stuff!
It also comes with a bag to fit the tools. 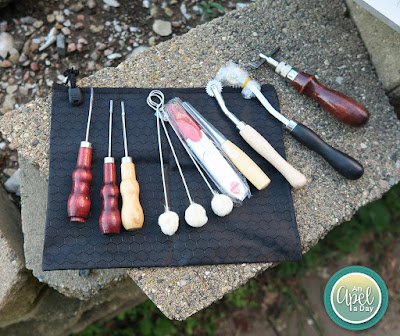 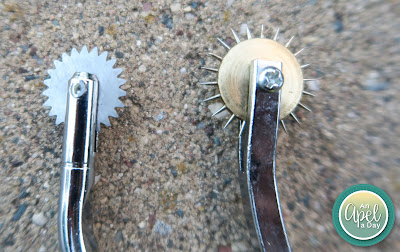 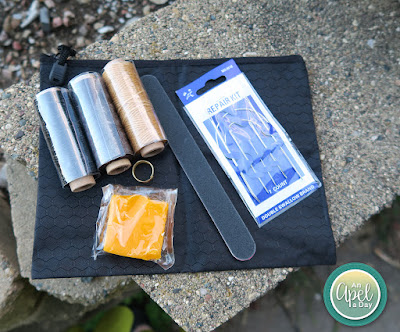 I think it's a great set for a beginner. Of course I'll help him figure it all out.


There are no metal stamps, but there's a variety of tools to make letters, or patters on your own. Certainly enough for personalizing your leather projects.

Would you buy someone a belt to begin using these tools, or just a slab of leather?

Disclaimer: I received this set in exchange for writing this review. I was in no way influenced by anyone in regards to this review.

Are You Ready for the Solar Eclipse?

What would you name it? 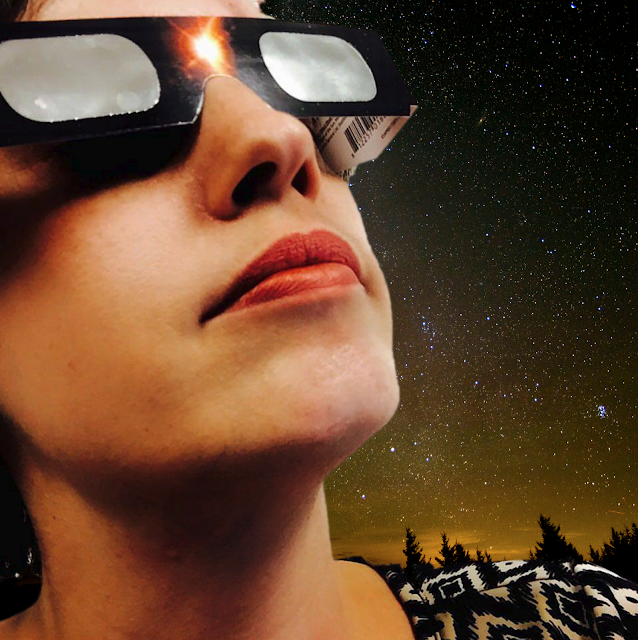 Since I live in Nebraska, and it's the path of the eclipse - hotels have been booked for quite some time.

Bill Nye is here in Beatrice, Nebraska. I already got an ear full on him. I mentioned him being here, and one of my co-workers apparently doesn't care for him because he's not a real scientist and he's anti Christian. I'm pretty sure anyone can be a scientist just for having an interest in science and doing science experiments. Much like anyone can be an artist, musician, landscaper... I'm sure he's not anti Christian. He's just anti some of their practices and thoughts. You can't tell me he doesn't have some Christian relatives and friends that he loves deeply. So there. I didn't say anything. I don't know the guy. I just thought it was odd she went there with such passion; like he's deeply offending her. I'm pretty sure she doesn't know him either.

There's that. Ya it doesn't really have anything to do with the solar eclipse. I too was like, What the heck? Where is this coming from?

I guess traffic may be nuts here! I'm hoping no one I know gets into an accident.

Travis has the day off, so he's traveling to Auburn to get out of the city.

The boys have been learning about the eclipse in school. In particular talking about the safety of wearing legit glasses. They do have school, and will partake in the viewing.

I have a lot of friends that live in Kansas City who found out last week that their kids do not have school. They are worried about kids taking their glasses off, having eye damage, and their parents suing the school.
What are your thoughts on if school should get cancelled for the Solar Eclipse of 2017?

Isaak was excited to try his glasses on: 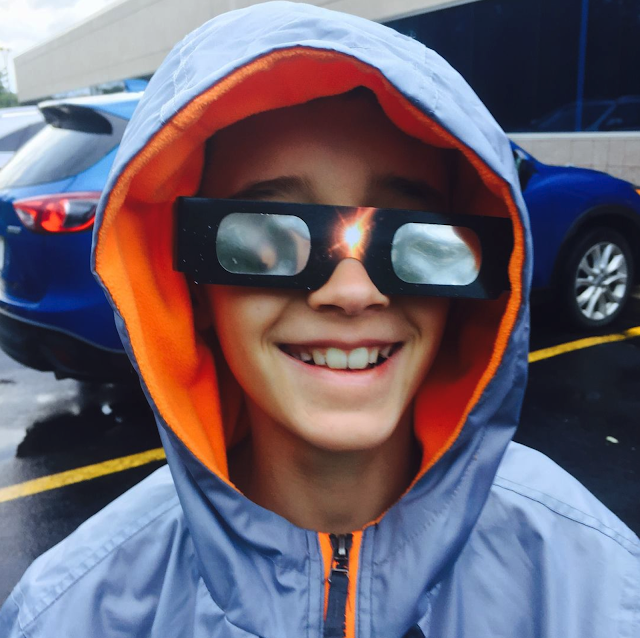 I'm pretty sure the boys will get glasses in school. We wanted to make sure they had some just in case, as glasses were not mentioned. 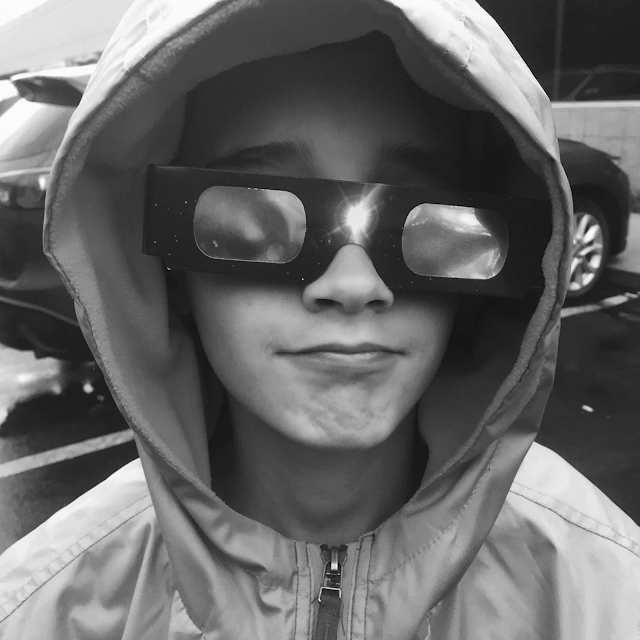 Before you decide to take photos, or use your phone in anyway read this: https://www.idropnews.com/news/solar-eclipse-iphone-photography-warnings-tips/47339/

You could damage your phone, or camera.

Just enjoy the experience! There are people trained to take photos and videos with filters for their lenses. I'm sure it will be all over the news, so if you can't get a good view - check it out later.

Protect those eyes! Peace out!
Posted by An Apel a Day at 10:57 AM 9 comments: Links to this post