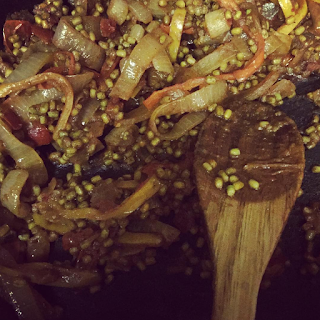 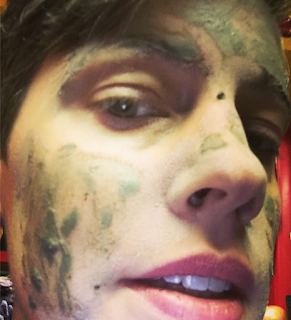 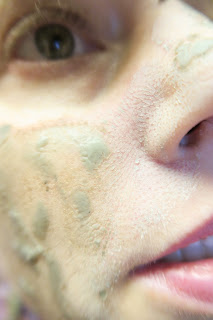 Isaak was all ready for his first basket ball practice of the season when I got home from work. I love how excited he gets for basketball.

He was dressed like he typically is, Y top, red shorts, crew socks, and basketball shoes.


I said, "Isaak why don't you put those red basketball socks on that I gave to you before Christmas?"

He said, "What basketball socks? Oh the ones like my friend wears that are long. Now I remember."

Off he was to change socks and shoes.

Then I thought, "It's pretty cold. I know you just got dressed kind of twice, but put on some gym pants instead of shorts."

He goes to put dress pants over his shorts. It was so silly looking! They were brown stripped dress pants. He looked like he had a big cloth diaper under them with the poof of his shorts underneath.

I laughed and said, "No!" Travis said, "Really Isaak?! I think you know how silly you look. Go change into gym pants!"

He changed AGAIN, but wasn't happy about it! :( Isaak carries most of his anger in his eyes. I tell him that he's going to have wrinkles in his eyes just like me when he gets older.

He said said all grumpy like, "Mom sit up straight, watch your posture." I do have horrible posture.

I said, "Isaak fix your eyebrows, watch their posture." We both chuckled.
Posted by An Apel a Day at 3:57 PM 4 comments:

Surgery Was a Success

My nephew Emerson that has Trisomy 18 has been battling breathing problems, since the fall. He's been in and out of the hospital 3 times I think - I kind of lost track. My sister kept telling the hospital that she thought possibly some of the problems were from a hernia that he's had, since birth.

The doctors kept pushing that thought away. They noticed he was having quite a few seizures happening. Instead of looking more into his hernia, they focused on his seizures.

At that point he was in pain, upset, doing this strange breathing thing, tired and not himself. Only 1/2 of those symptoms were from his new seizure meds.

Prior to this fall he was a happy little guy!

After this last MRI they found out that his hernia was pushing his colon up and down. It was moving its way up into his chest cavity.

Yesterday he was prepped for surgery:

He had a hearing test, while he was out. His hearing keeps getting progressively worse. They are looking into Trisomy 18 kids to see if hearing loss is common.

His seizures are the same. He's always had some. Hopefully they don't get worse.

His surgery on his hernia was a success. I hope he starts being more his smily self.
Posted by An Apel a Day at 10:40 AM 5 comments:

Thankfully everything was ready to go for Christmas. I just needed to prepare some food for yet another get together.

I learned something this year that I wish I would have known this whole time. Usually I go back in my bedroom to be quiet, so the boys can go to sleep. This year we decided to play Scrabble in the living room. Playing the game kept us up, sudden noises were normal to their ears, and we got to nibble on cookies and Travis drank the milk. In between turns we got out the gifts we wrapped and put stuff in their stockings. It worked like a charm.

The boys woke up at 5 AM for Santa that next morning. Yep they were excited. I didn't mind the early morning wake up call, but Travis hates when the boys wake us up that early! He snapped and said, "Don't wake us up until the coffee is made, and play in your rooms for at least another hour!" That's torture on Christmas morning.

The boys did what they were told.

I didn't capture any photos that morning. Why? Well it was freaking dark out still. All the photos would have been dark and grainy.

They each got a big Lego thing. Mica's starting to get more practical gifts. Like any mom I wonder if he enjoys them. He got a sleeping bag instead of a game like Isaak got. He got a wallet in his stocking when Isaak got a dice game. He can't go into middle school with a cute robot wallet, nor can he go camping with a cute bug sleeping bag. He's growing up. His needs are different now.

I am really lucky that my mom makes us cinnamon rolls for breakfast. We take them with us on Christmas Eve. They really save a lot of time for breakfast. The boys love them.

While the boys put together their Lego sets I made food for our next family event. I generally make a veggie tray because we can always have more veggies! I cut open 2 pomegranates to bring seeds. I brought mixed nuts, a cheese ball with crackers, and a cookie tray.

Christmas is filled with family! 56 family members to be exact! Just my Mom's family gets together. My Dad only has 1 brother that's not married. Travis' family lives far away.

My Aunt Becky loves to get a big box, and she fills it with small presents that have strings attached to them. Each little kid gets a Christmas question, and gets a present when it's answered.

Mica and his cousin Evan retired from questions, and are now paid Elves that help Becky.

Mica read a story to the kids before the present giving started. It was great, but way too long of a story. I had to cut the poor boy off. 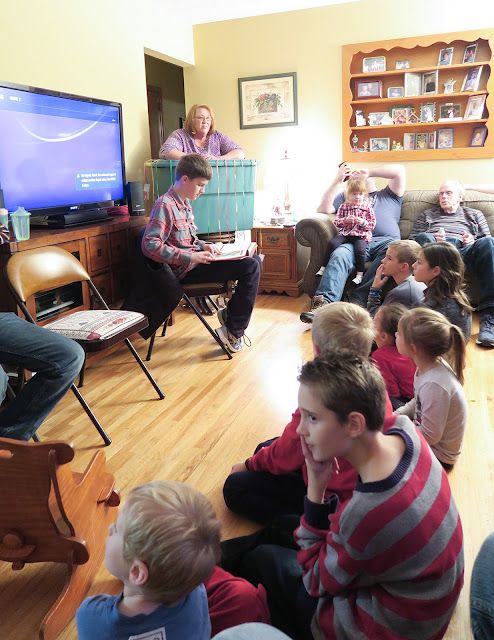 Isaak loves his cousin Edison so much. Edison says Isaak's name so cute. It was, "I Kick", but now it's said more like his name. 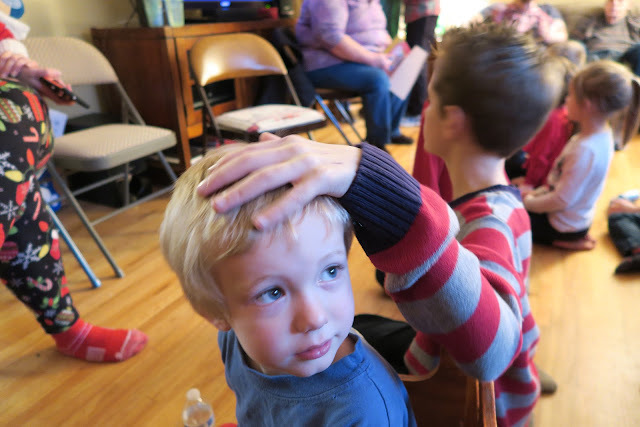 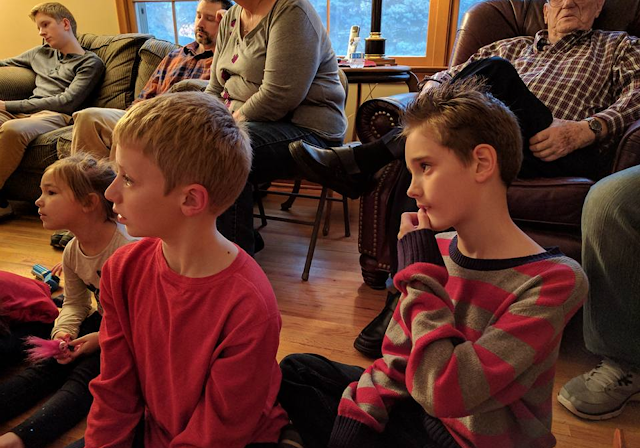 Emerson almost went to the hospital before Christmas. My sister asked if his tests could be after Christmas. Since he's had his tests - we now know why he's breathing funny at times. Emerson's liver and colon are back up in his chest cavity. It's from a hernia he's had for some time now. It has to be fixed up. He's still having seizure activity, but it's not any worse than before. We'll know soon when he'll have surgery. They have to get it worked out between the doctor's and hospital. Insurance says it has to be fixed, so good for them! 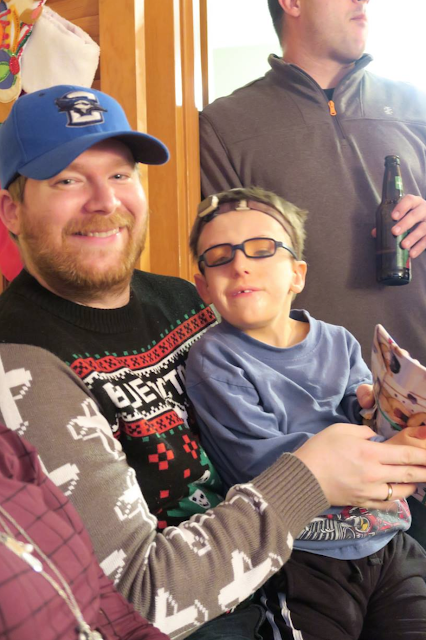 The boys enjoyed Christmas Day. Well Isaak had his moments. He seems to be the kid that's left out at times. The bigger boys were hogging the game system downstairs. That's when I want to say, "Go outside and play ball!" It was strange weather that day. More like spring than winter. We had heavy winds, lots of downpours, and it was warm. Anyhow going outside to play wasn't in the cards. I offered to play games with Isaak upstairs, but no little boy wants to play with their mom when all the action is downstairs. Travis got the full scoop from Mica later that day. Had we known the bigger boys would have had some rules put down. Since Mica was in on that crowd he lost privilege to have access to his Kindle the next day.

If you celebrate - What did you do on Christmas?
Posted by An Apel a Day at 4:07 PM 2 comments: 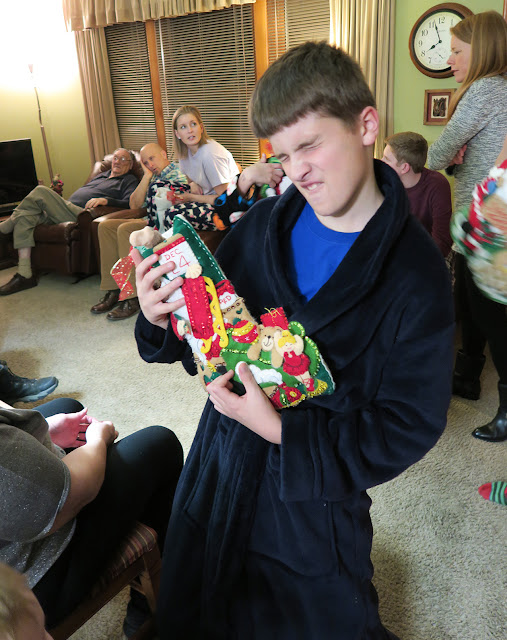 Our Elf on the Shelf left the boys matching PJ bottoms before Christmas. The elf - Brita was rolled up in one pj bottom, and her partner in crime a TMNT was rolled up in the other. It's sometimes hard to find matching anything because Mica is fitting into adult smalls, and Isaak fits into boys size 10. These pj bottoms are so fuzzy and soft. 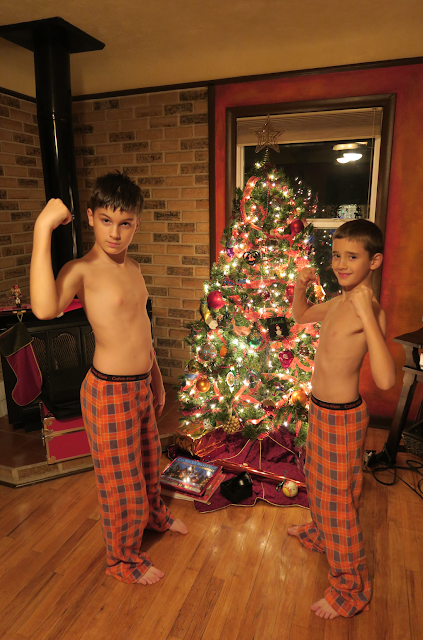 Isaak in particular is into showing off his little wanna be man muscles.

Christmas Eve is always a big deal in our family. We have a huge meal with my parents, my grandpa, my sisters and brother-in-laws, my nephews and niece. After the meal comes presents.

I made pickle roll-ups. Just put an oval or circle cut lunch meat down, spread it with softened cream cheese, add a pickle and roll it up. Then cut into slices with a sharp knife. I imagine if you don't like pickles you could do this with cucumbers as well. They went fast!

They were a pain when I was using deli sliced meat because it wasn't in a circle or an oval. Once I got prepackaged oval cut deli meat it was easier. Try getting the smallest big dill pickles you can find. 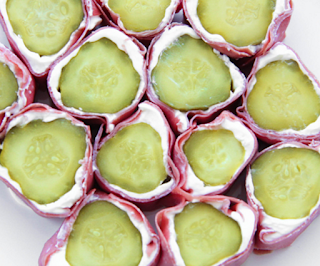 During present unwrapping and stocking time we get out the deserts.

I tried to capture many of the kids. Of course they were so wound up! The boys were wrestling before this picture was taken. Isaak's in the phase were he hides when it's time to take his picture. 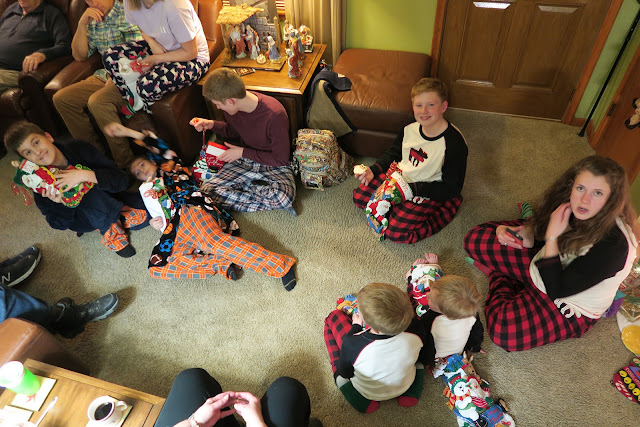 I gave the boys robes before this day as well. They've been living in them. It's funny because they hardly want to wear pjs, but will wear these big fluffy robes to bed. I don't get it, but I'm glad they love their robes.

My mom mixed up Mica and Isaak's big Lego gifts. There's no pulling wool over their eyes. They both switched them, and laughed it off. 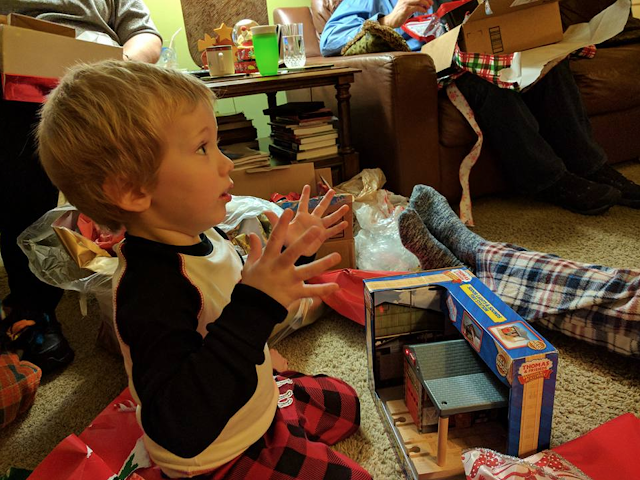 I love watching my younger nephews open up gifts from us. I try to make the gifts fun, and match their personalities. I love giving. What's your favorite part of Christmas?