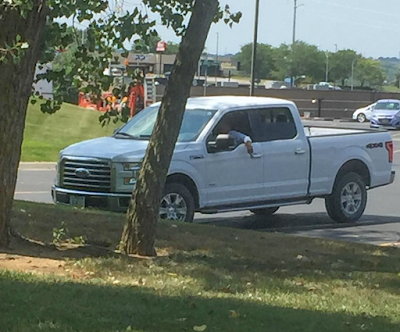 Here's the t-shirt design. It's still not my cup of tea, but it's as simple as I could get it with all the stuff they wanted in it. All the white will be whatever color of shirts they choose. The "O" Is similar to their logo "O" just the bottle thinner. It can also stand for "Omaha", which is where the conference will be located. 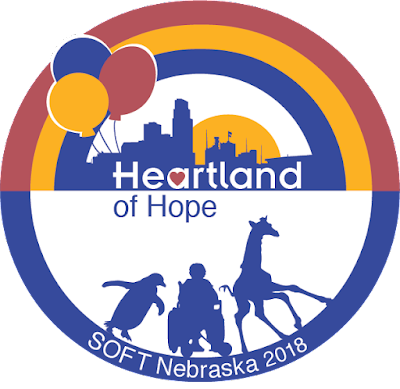 Last week I had my Aspirin Desensitization.

What in the heck is an Aspirin Desensitization?

Taken off the internet to help explain it: In patients like me that have sinusitis and nasal polyps, endoscopic sinus surgery it was needed to help patients like me whose asthma is worsened by their nasal problems. After surgery is performed, it is often helpful to perform "aspirin desensitization."

In my own words: I'm allergic to Ibuprofen, which reduces inflammation. If I had an allergy or asthma flair up I couldn't take Ibuprofen or Aspirin; they are related.

What happened when I took it? My lungs would shut down, and I'd have a sneezing snot fest.

They gave me little bits of Aspirin every 90 minutes for 2 days, which could have lead to 3 days. I was closely watched in case something major happened.

What to expect with an Aspirin Desensitization?

The Allergy and Asthma Clinic couldn't give me a Aspirin Desensitization too soon after my septum and polyps surgery. Why? Because it thins the blood. It would have been dangerous for me. They also couldn't do it too far away from surgery because polyps could form. That still could happen, but I'm at less of a risk now.

They gave me an IV. I thought the Aspirin would be dripped into me. Nope! The IV was just in case they needed to save my ass. I was confused when they taped it to my arm with medical tape because I thought it was going to get used for 2 days.

Per usual I was stuck twice. It's either two or three times I get stuck. I just have small rolling veins. 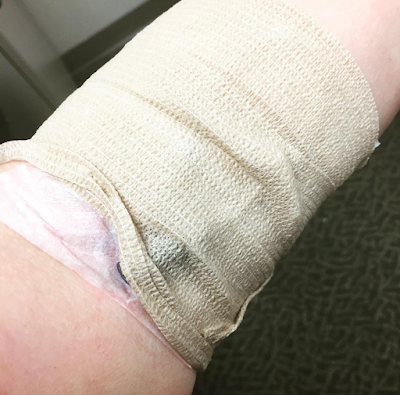 That IV was left in the whole time - 2 days. The boys freaked out when I got home that first night. Mica, "Mom a needle is really stuck inside your skin still?" Me, "Yes. You be good, or I'll stick it inside your skin!" Totally kidding of course, but I didn't need to say that to him. He knows my humor. Mica, "Isaak! Mom has a needle stuck in her skin!" Isaak, "Really?" Me, "Yep!" Isaak, "Gross!" For some reason it was a big deal to them. I told them both that they had an IV needle stuck in their skin for a few weeks when they were babies - one had Meningitis and the other had a Staph Infection.

They flushed the IV out that 2nd day with saline just to make sure it worked. Other then that, that's all it was used.

Liquid Aspirin was given to me in a little medicine cup with some gross stuff that tasted like Alka Seltzer. If you're getting this done have something to drink to wash that crap down! Luckily gross drinks don't bother me.

After my first dose I had to use the bathroom. I drink coffee, a smoothie, and a tall glass of water in the morning! When I left the office to use the bathroom the cute doctor said, "Are you ok?" with a concerned look on his face. I wanted to joke with him by saying, "I am now that I've seen you." Of course I didn't say that though! Ha! I just asked a nurse to show me the way through the maze to the bathroom. I feel like all medical offices are mazes in the back! Are like that to you? It was then I figured out that the gross drink was my Aspirin. I really had no idea!

Was it the Aspirin, or was it the nasty storm that came through that day? I'm not bitching about the rain; we needed it! I just know storms that come through make my allergies and asthma act up! We didn't have one for awhile. They were thinking it was the Aspirin. I beg to differ. I think it was the storm.

I Got a Nebulizer Treatment About 5 Times That Day: 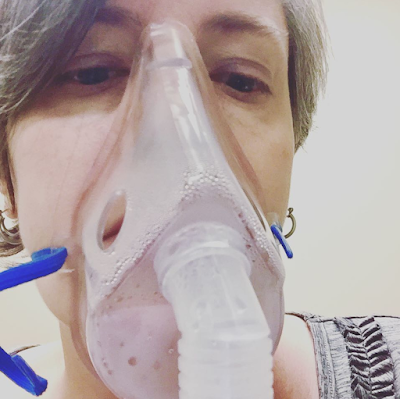 What did I learn? Don't breathe deeply the whole time with a Nebulizer! I was majorly tingly almost every time afterwards + I was out of breath when they tested my breathing again. Breathe normal.

Bring Stuff to Do:

I wanted to paint, but figured that would be too messy + it would require more trips to the bathroom for cleaning out water. Too bad I wasn't in a sewing stage of an art project. To be honest I haven't had the energy to paint much all summer. Lame! I'd say excuses are for losers, but that surgery took more out of me than 2 c-sections ever did.

The first day I wrote down 30+ ideas to paint. I also looked through art books.

This is his character Twipsy done in different styles. He's from Spain. Fact: He's won awards for the best animated feature and he created, he created the character Cobi for the Atlanta Olympics in 1984, and he did all the graphics inside a Great Lakes Science Center in Cleveland, Ohio! He's kept up with the times in Spain. He's not known as much throughout the US. 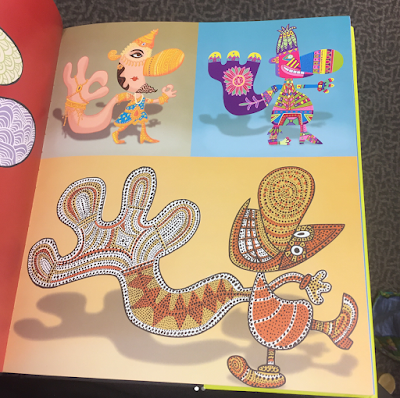 This is a limited edition book. His work went from illustration to privately owned pieces. It's very dream-like. He's from Arizona. 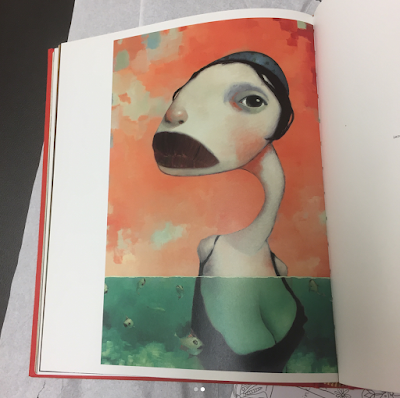 I was at the Allergy and Asthma Clinic all day day 1. My cute doctor only visited me twice.

Day two my cute doctor informed me that I still could have a bad reaction. The Aspirin went from liquid to pills, which they nearly doubled the dose.

I I brought a laptop, and finished my sister's t-shirt design for the most part.

I got a visit from the cute doctor at 3:30, which he said I was released for good. I passed all my breathing tests day 2. Now I'm on 2 Aspirins a day 2 times a day.

One other thing to expect if you have an Aspirin Desensitization: Bring food! I had a freezer bag with a sandwich, raw veggies and fruit.

I've also learned in the process that the doctors consider all my nose stuff to be a disease. I never thought of myself having a disease. Apparently to them I have one.

After months of taking Aspirin I should be able to take more pain meds. That will leave me just allergic to Sulpha.

Are you allergic to any meds?

I love our library! They offer so many things there.

Mica's been helping them stock books and with their Read to a Dog program. It gets kids reading, and dogs love attention!

Mica and a friend took a Babysitting Clinic at the library earlier in July. I think they were the only boys, but they learned how to change diapers, first aid, what to charge, what to do in emergencies and so on. Both boys seemed happy when I picked them up, so they must of had fun. 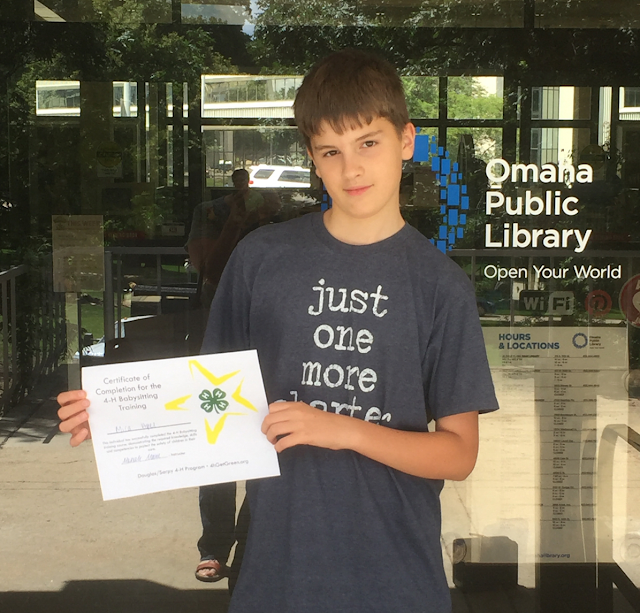 Last weekend Isaak and Mica had a Clue Lock-In at the library. All the Librarians were dressed up like people from the game/movie. They had clues in each room to solve a mystery. It looked fun to me! 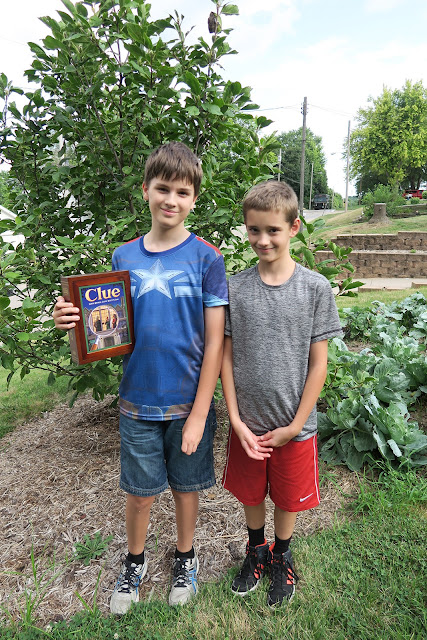 All their classes, clinics and lock-ins are free. I make sure to thank our Librarian's. They have coding classes, Lego classes, story time, and a ton of classes for adults too.

Isaak, Mica and I tend to have streaks in the fall and winter where we have IBS type issues. It comes on us like a storm, then we can't seem to get rid of it. The only way I've found to put my system back in check is by going on the B.R.A.T. diet (Bananas, Rice, Applesauce, and Toast and/or Tea). I also start taking Digestive Enzymes. Something that would take me a week or two to get over changes to a few days. I'm a happy camper, and so is my stomach!

When I was in middle school I kept getting sick. My mom had me in for stomach testing. During the testing my stomach was totally fine. I wish they could have tested me when the symptoms were present. 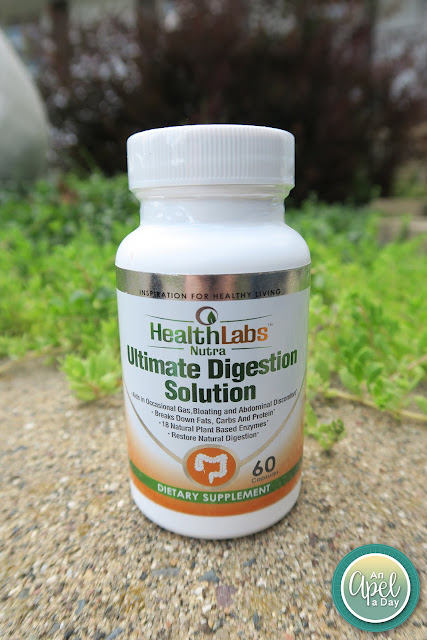 During the time I take Digestive Enzymes I stop taking Probiotics.

HealthLabs Nutra has the Ultimate Digestion Solution packed into 1 bottle. You can take a few a day, for 30 days. There are 60 pills in a bottle.

Each bottle have a plastic coating, a foil wrapping on the top, cotton and a lid to ensure that the pills don't get damaged in shipping. If the plastic ever looks like it's been opened let the company know right away. 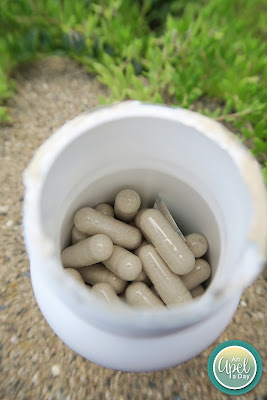 I like this style of pill best! At times I open them to put them in a smoothie.

You can get these at Walmart for $18.95 https://www.walmart.com/ip/Digestive-Enzymes-30-Day-Supply-Irritable-Bowel-Syndrome-Relief/111422852 It's well worth the price to feel better. 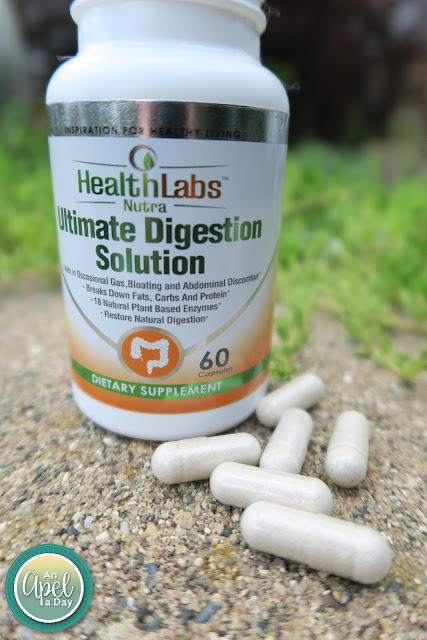 What it Helps With:
It's all plant based.

Do you have stomach problems from time to time?

Disclaimer: I got these product to help write this review. The company in no way influenced my decision when reviewing this product.
Posted by An Apel a Day at 10:00 AM 3 comments: