When back to school time came, and went the boys asked for labels. Mica had some I got awhile ago, but needed new ones.

Kidecals asked me to review some labels. I've heard nothing, but good about their products. They sell labels, keyboard stickers, mural stickers, and sticker frames.

I had trouble deciding which labels to get:

Mica likes Batman, so these were one option:

Mica has Superman on his backpack. Knowing Mica, he wouldn't want to mix superheros with his school stuff. I decided to get him labels that could stand for any superhero.

I love how Kidecals has a preview option. Some labels have color choices, while others do not. They have labels for girls, and boys.

There are 3 sets for the label design I chose:
I went with the Mega Set. Kidecals shipped the labels out right away.

The printing turned out great! 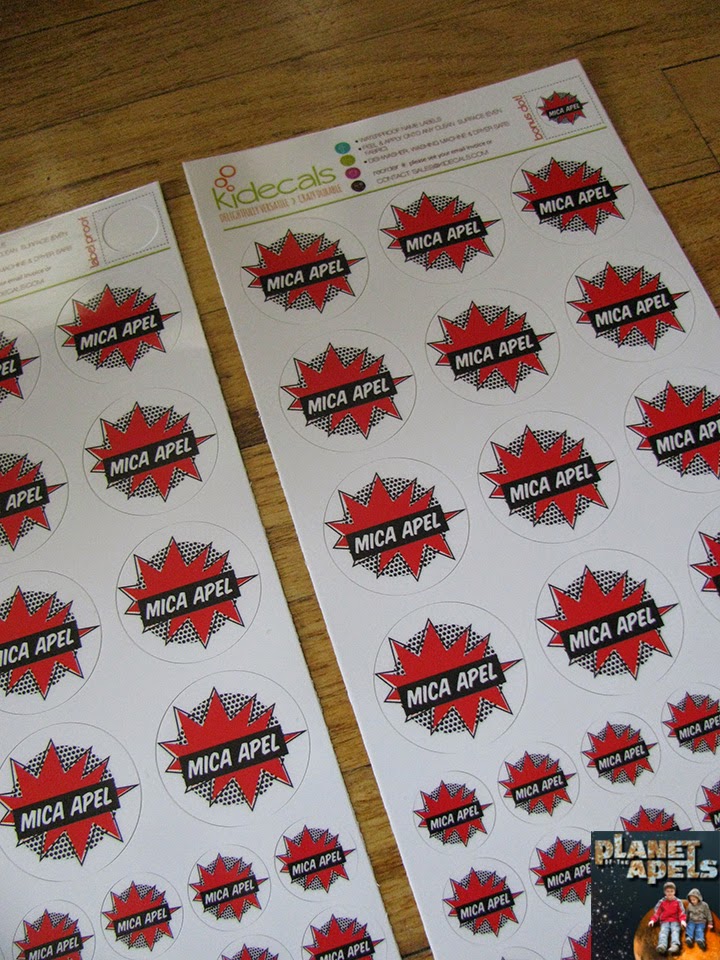 I'm saving them for Mica's stocking at Christmas time.

What do we use labels for?

You can use labels for so many things. Much of the kid's supplies go to the class. It's like a community supply stash. If they have too many things, they'll send stuff home to the parents. Things that are not community used are crayons, notebooks, pencil boxes, folders, lunchboxes, and Thermos'. 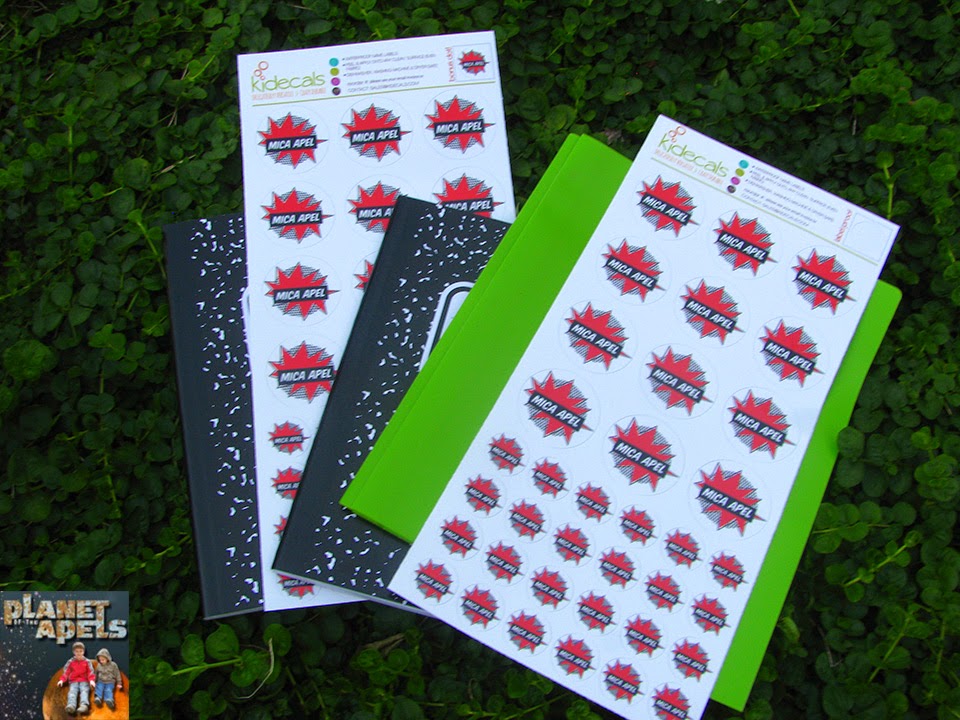 Do you use labels? What do you use them for?

Disclosure: I am compensated for writing this post by receiving a GC to Kidecals. All opinions stated are my own.

The person I'm featuring this week is Madiha Bhatti. She doesn't have a website, she doesn't have a facebook fan page. You just have to trust me that she's someone to listen to. She questions why women and music is the way it is today. One might say, "If you don't like the what music is like, turn it off." It isn't so simple. Music plays everywhere.

This isn't truly music, but it's music inspired. I posted a long time ago about Ani Difranco. She sings, is a musician, writes her own music, and delivers poetry in a sing, songy way. I feel like Madiha Bhatti does the same.

It makes my hair so soft, without feeling oily. 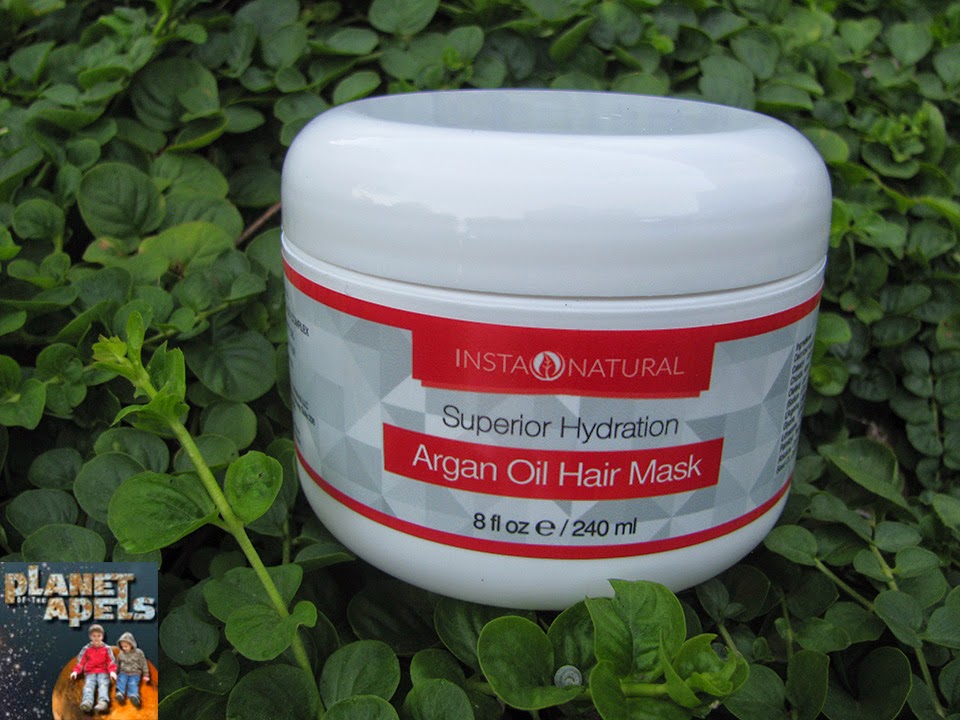 As I age my hair gets frizzier - thanks to genetics, and having kids. I really want to protect my hair. I don't use anything on it that has sulphates in it. Being sulphate free was an adjustment at first, but now I love it. It can be difficult to find products that dislike sulphates as much as I do. The more natural the products are, the better my hair feels.

You can use it daily as a conditioner, or once a week as a hair mask. If it's used as a mask, it should stay in your clean hair for 5 to 15 minutes. It turns dry damaged hair into luxurious, silky strands that makes your hair soft and shinny. 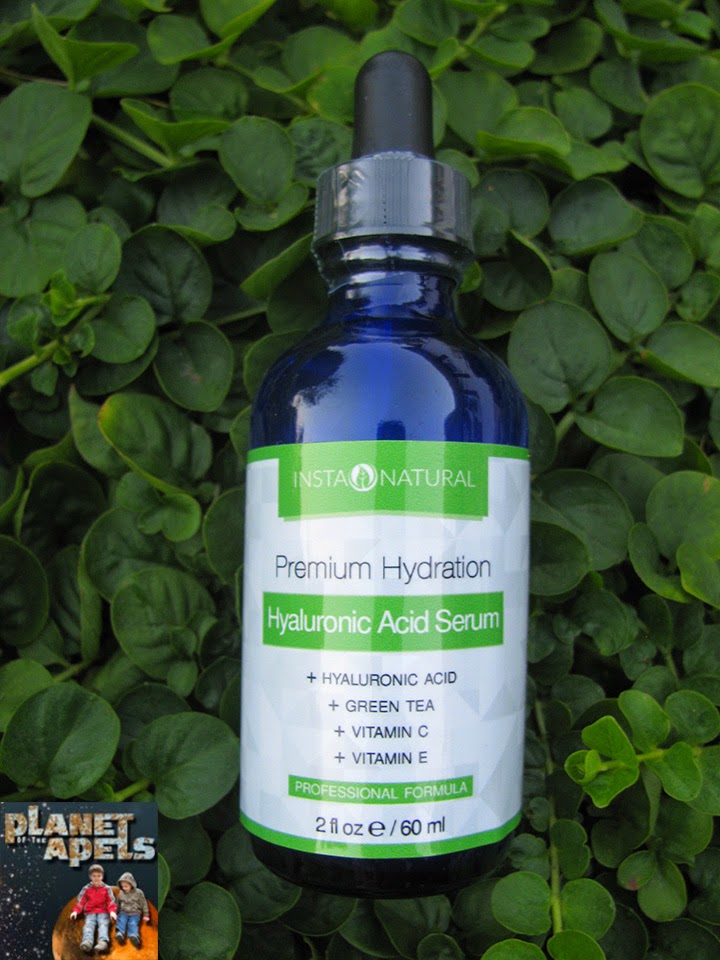 The winter months are going to be here so soon. I know we have fall first, but that flies by so fast here. During the winter months my forehead gets so dry. I also have thinking wrinkle lines on my forehead. I'm hoping this acid serum helps with all the above!

Hyaluronic Acid Serum is anti-aging serum for your face. It can be used for fine wrinkles, and lines in your face.

It leaves you with youthful, vibrant skin.


Unlike the Argan Oil Hair Mask, the Hyaluronic Acid Serum takes a little time to see if it's going to work in the long run. I am glad I have a product to try out to help my forehead.

I received one or more of the products mentioned above for free using Tomoson.com. Regardless, I only recommend products or services I use personally and believe will be good for my readers.
Posted by An Apel a Day at 10:56 PM 3 comments:

On Friday the boys were watching a movie when I got home. Mica could have cared less about what he was watching. He was way more interested in the preview before the movie. All he talked about that evening was King Kong.

He wanted to watch it.

I looked it up at our local library, and all they had was the older one. He had to watch the new one.

Mica said, "Grandma and Grandpa will have it. They can get anything on their TV Mom."

He did just that, "Hello Grandma. Can you check for King Kong on your TV? I really want to watch it. Here's what you do...It's a little secret Grandpa, Isaak and I know...You just press Guide, Search Movies, and type in the letters of the movie. Like in this case type in 'King', and it will come up. Now when can we come over to watch it?"

Mica handed me the phone saying, "Grandma wants to talk to you."

My mom was cracking up! She said she lost it when he said,  "It's a little secret Grandpa, Isaak and I know..." She said it would come on, on Monday.

We went over on Monday to use them for their TV. No worries, they don't care.

Both our sons were absorbed in King Kong. Especially Mica. He acted like he knew all about it because he saw the preview. 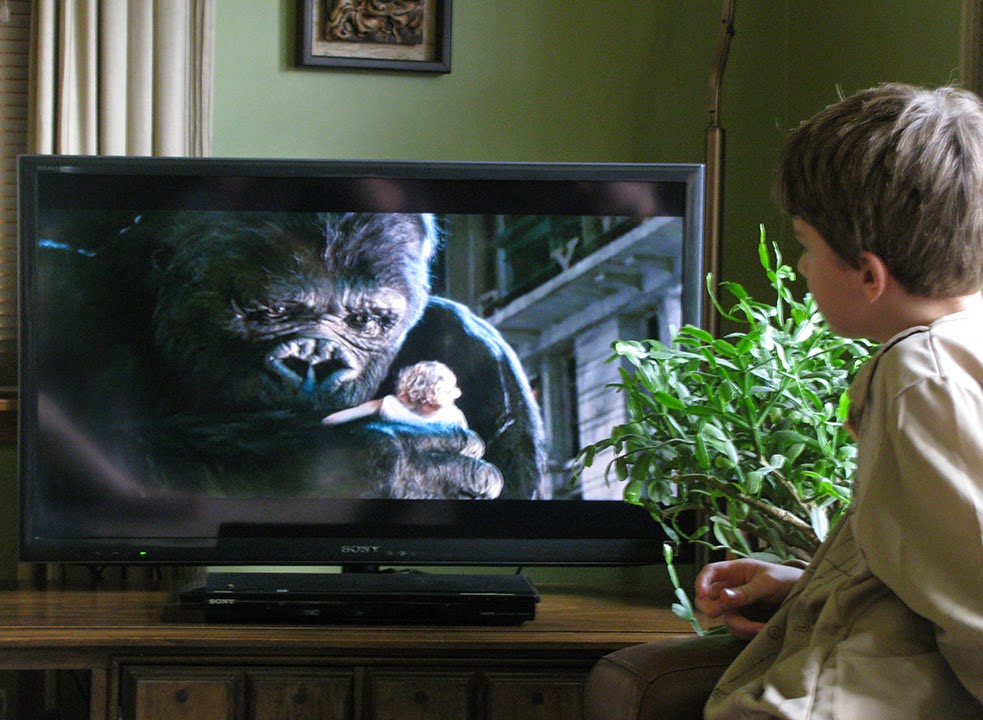 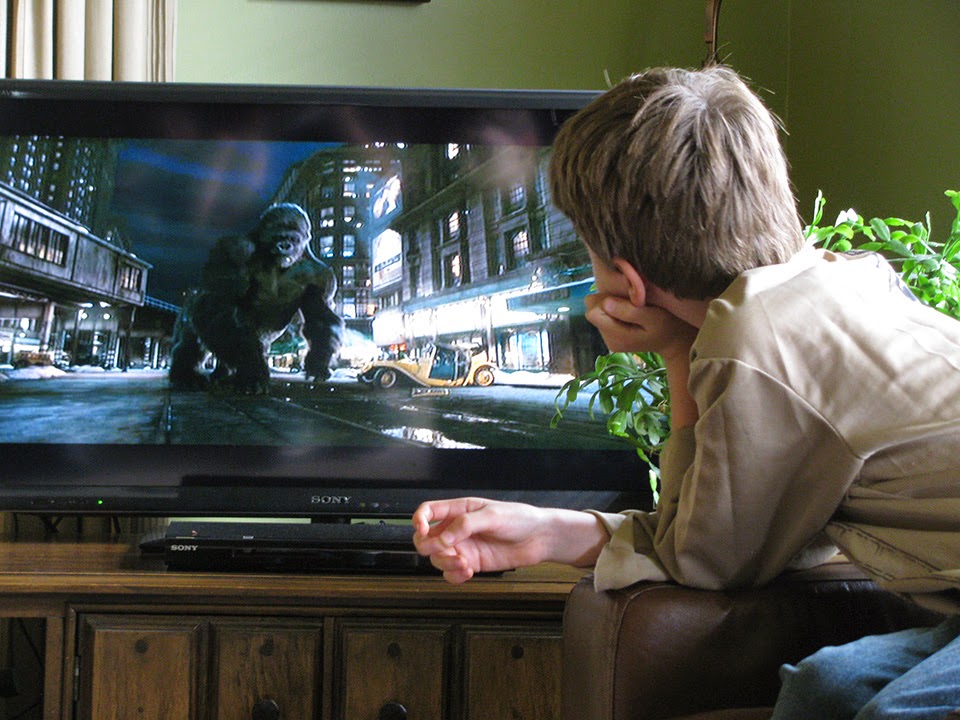 I think the ending took them both boys off guard.
Posted by An Apel a Day at 3:39 PM 5 comments:

WW: I Don't Think He Was Made in China {Linky} 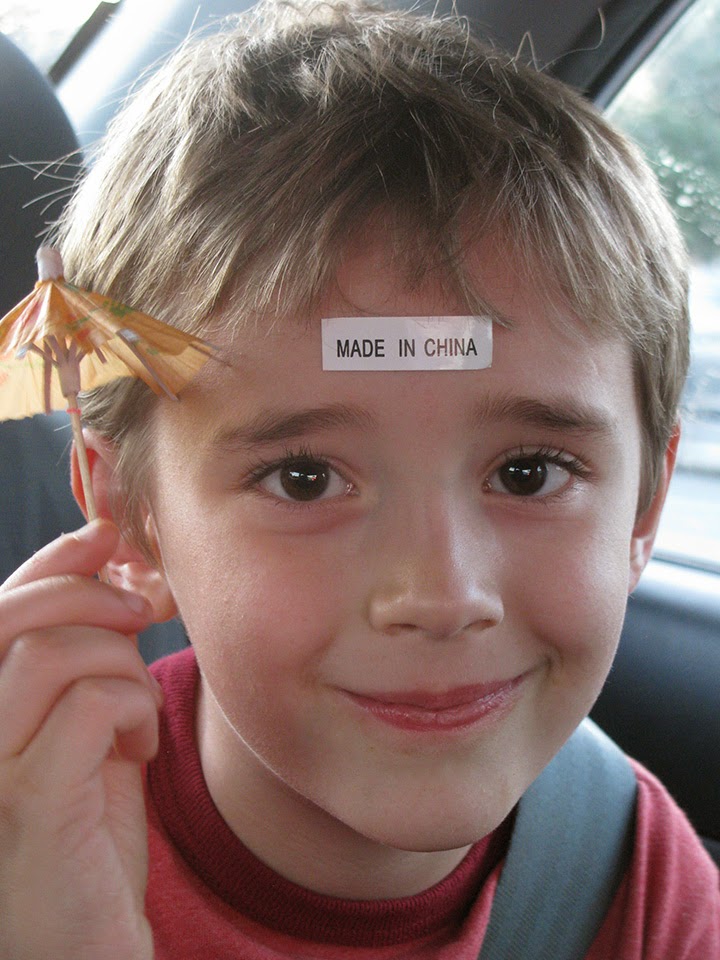 If you have a moment please enter the Cooking with Beans eBook Giveaway.
Posted by An Apel a Day at 3:40 PM 30 comments:

Email ThisBlogThis!Share to TwitterShare to FacebookShare to Pinterest
Labels: china

If you remember I started to make a Faux Terrarium a few weeks ago: 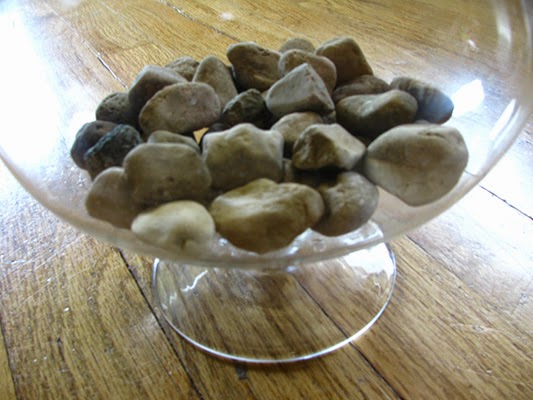 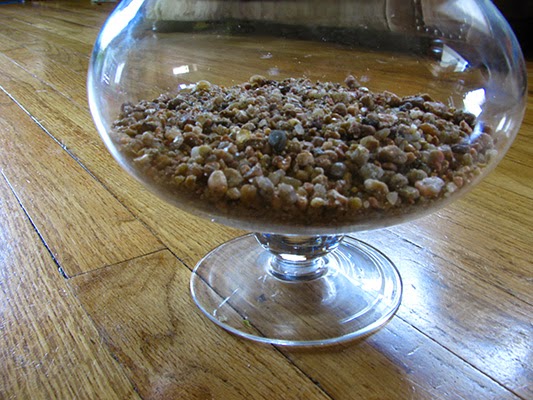 I dug up some dirt, and microwaved it. I learned that microwaving anything in nature for 2 min. kills the living things in it. Not that I like to kill nature, it's just that this is going in my house. 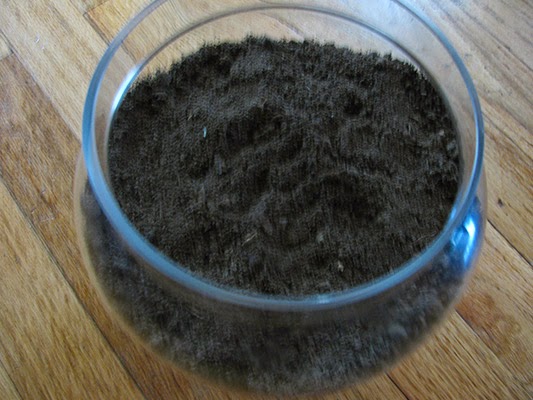 I know I left you hanging with the end result.

I made faux mushrooms out of Sculpey. If you are unfamilar with Sculpey it's a clay that can be baked in your oven to harden. It turns into a hard plastic. You can paint on it with oils, or acrylics. They do have colored Sculpey to. 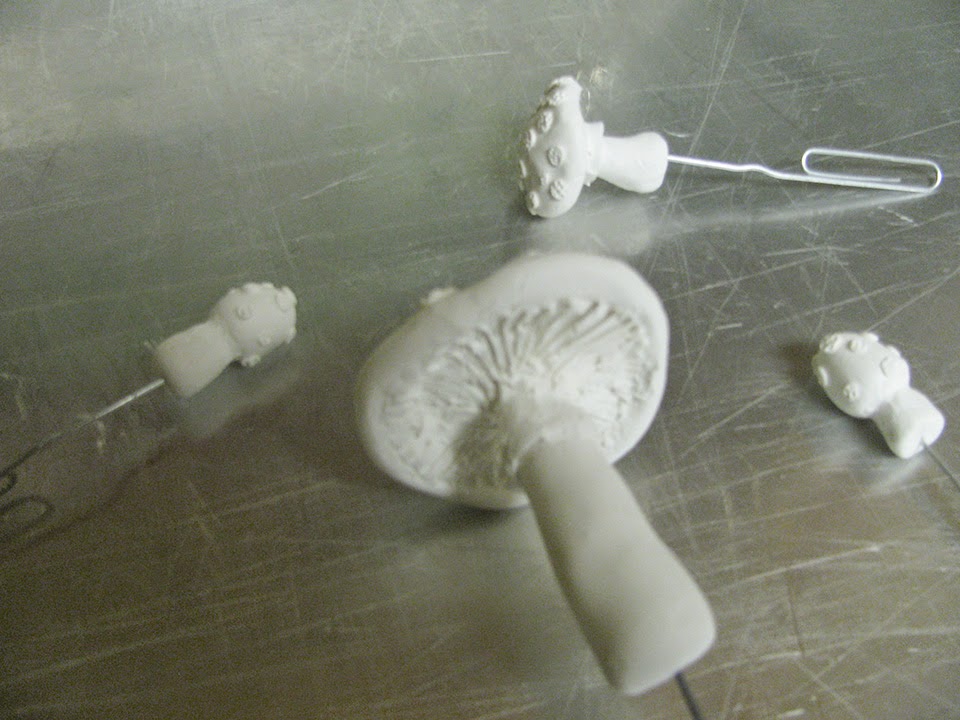 I painted them with acrylics. I had them done for awhile, but it's been so rainy here. When it's not raining, it's muggy. I took everything outside to shoot once, and the glass on the Terrarium, and on the lens of my camera kept fogging up. 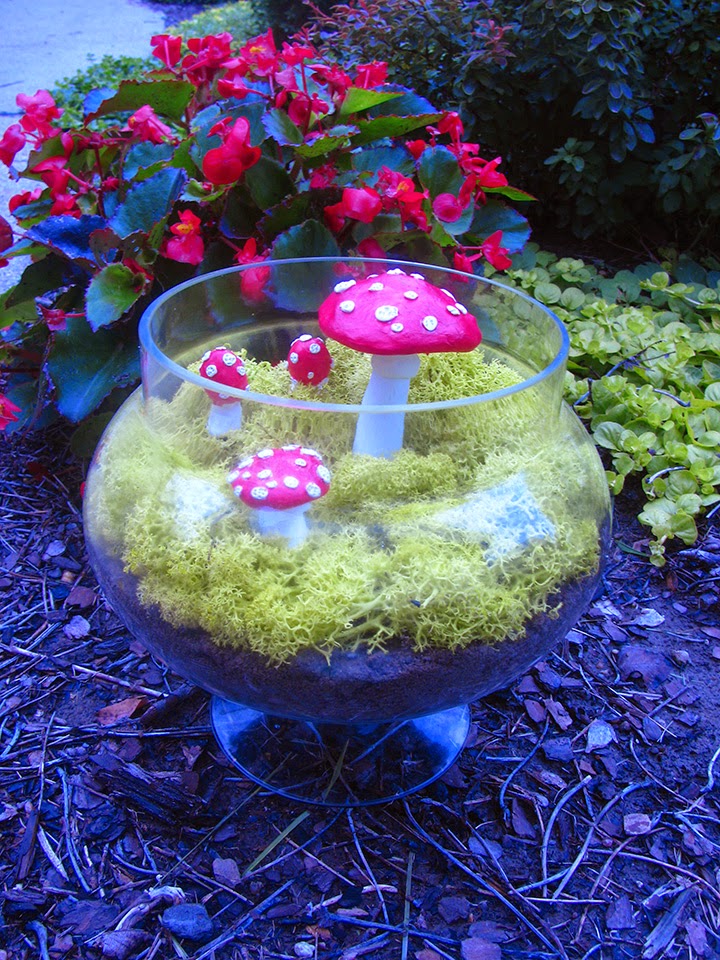 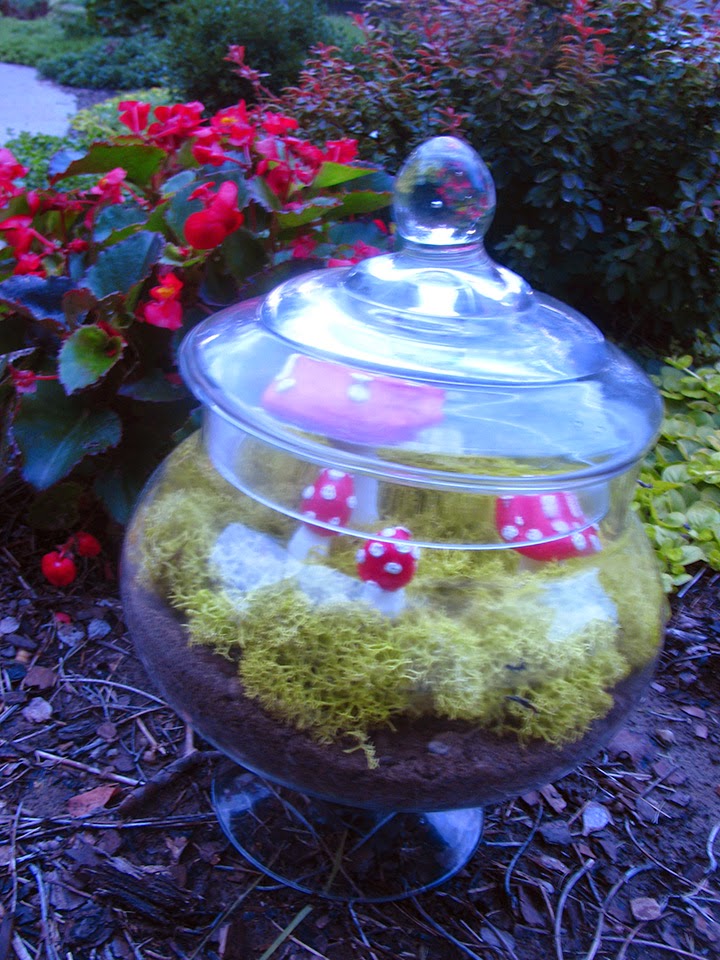 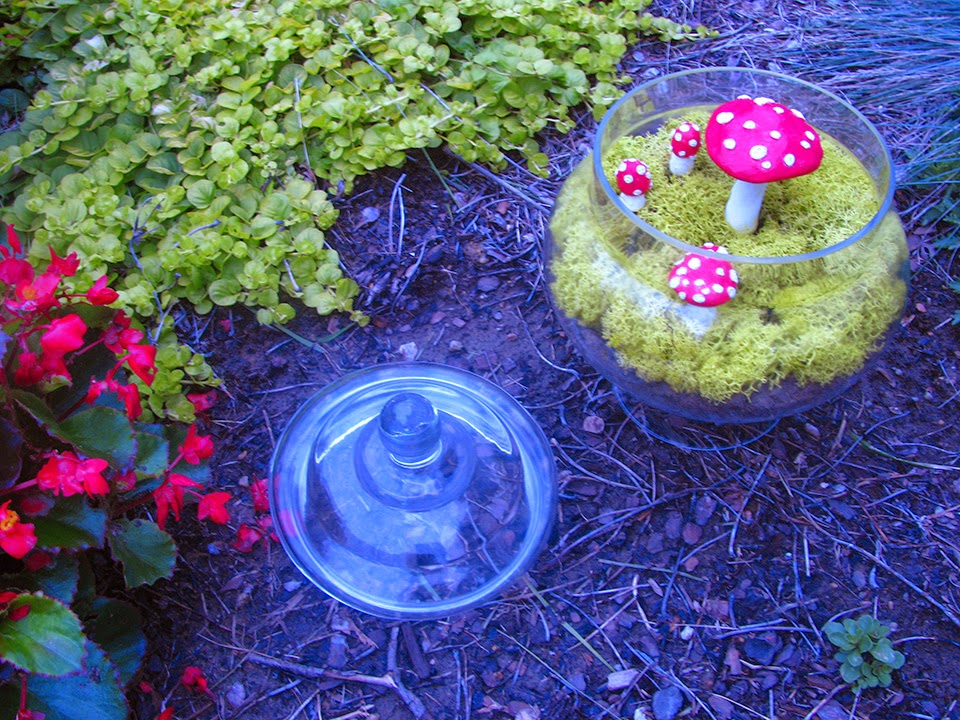 Why a faux terrarium?

I wanted something fun in my hallway. I've had a thing for terrariums lately. There is no light there, and I needed something that had a lid. I want to be able to dust it. Making a fake one just seemed like the right choice for this spot.

Yesterday Daddy turned 39. One more year, and he'll be over the hill.

I got him a welding cart. When I went to get his present on my lunch break the place was swarming busy! I never knew a tool place could be that happening. There was a free screwdriver set in the ad, so I got that to. I went to walk out with the screwdriver set, and pulled my vehicle up to get the welding cart. The worker came out with the cart, and said "Oh here is this." He handed me a little bag. I assumed it was something for the cart. When I got back to work I realized what I took - thinking was my free screwdrivers wasn't screwdrivers at all. It was an Air Regulator. It was the same size as the screwdrivers. I accidentally ripped the place off.

Have you ever stole something on accident?

I did one other time. I once gave Mica a hat to hold when he was in a stroller. I forgot I did that, and rolled off with the hat.

I'll return the regulator just like I did the hat. The hat was a pain to return. It was a big mall, that is pretty far from our house. Mica and I were done with shopping that day, but I knew if I didn't return it then, I'd never get it returned.

In the morning of Daddy's birthday he went to go do a few things for himself. He had to get his smart phone checked out. It needed some updating. It was a great thing because they lowered our monthly bill to. Then he got a hair cut.

After that he went to watch some football with the son of ours that likes football. Isaak says he loves football. Mica on the other hand looks annoyed whenever it comes on.

We go out to dinner for each others birthdays. Daddy's choice was Kobe Steakhouse.

This is what it's like taking a picture of my 3 boys, "Hey look at the camera!" or not! 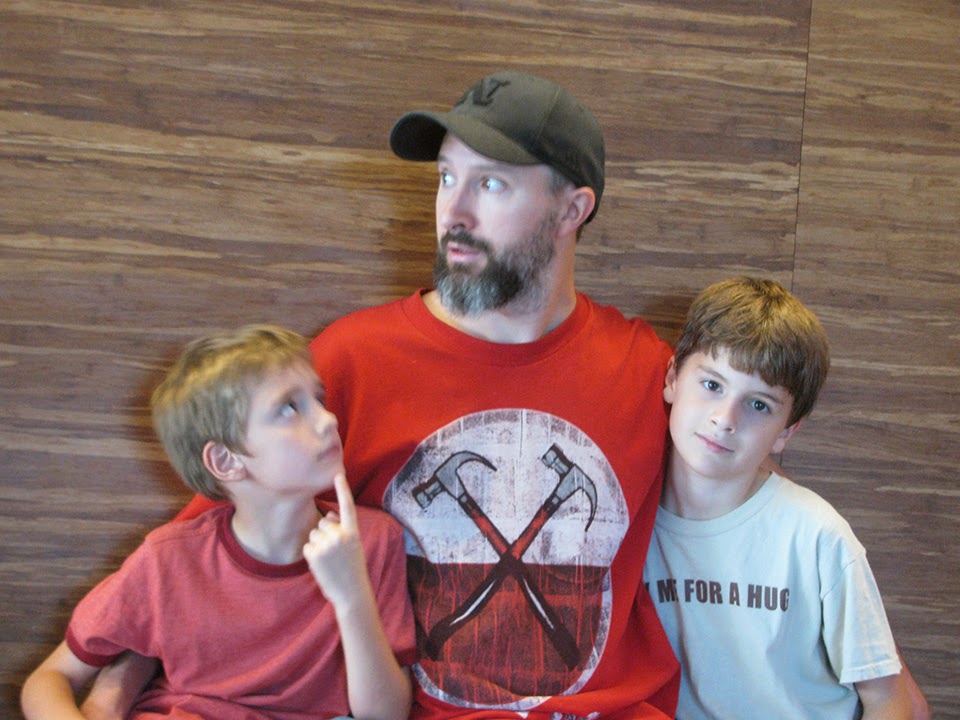 I did get one so, so picture out of them - minus Isaak's starry face. 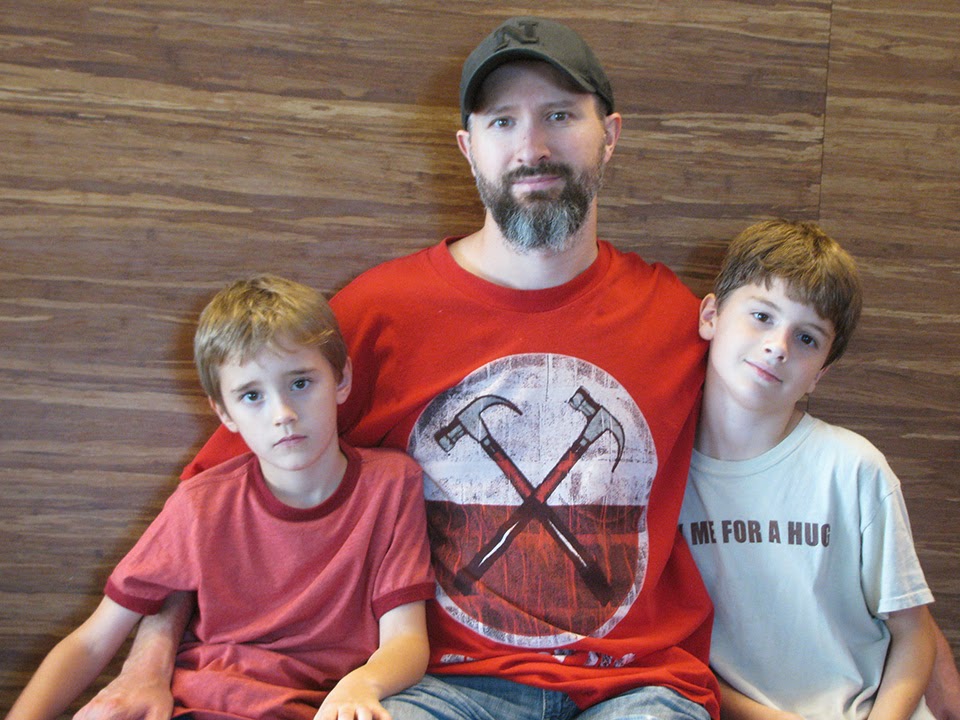 No one volunteers to take pictures of me, so I took a selfie with Mica - and he turned on a freak face. 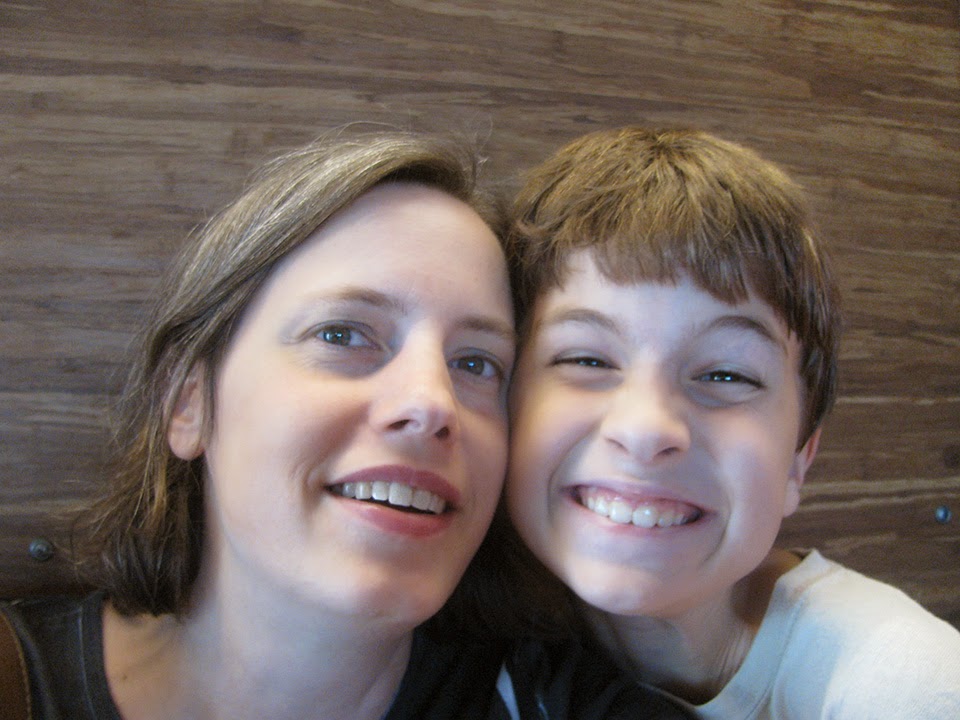 Mica told me that he wanted a cocktail. I said, "Kids can't have cocktails." He said, "Yes they can Mom. They have cocktails for kids." I said, "Mica do you know what a cocktail is? It has alcohol in it." Sure enough they had mini cocktails on the menu. Isaak had a Shirley temple, and Mica had a Roy Rogers. Mica's memory floors me sometimes! 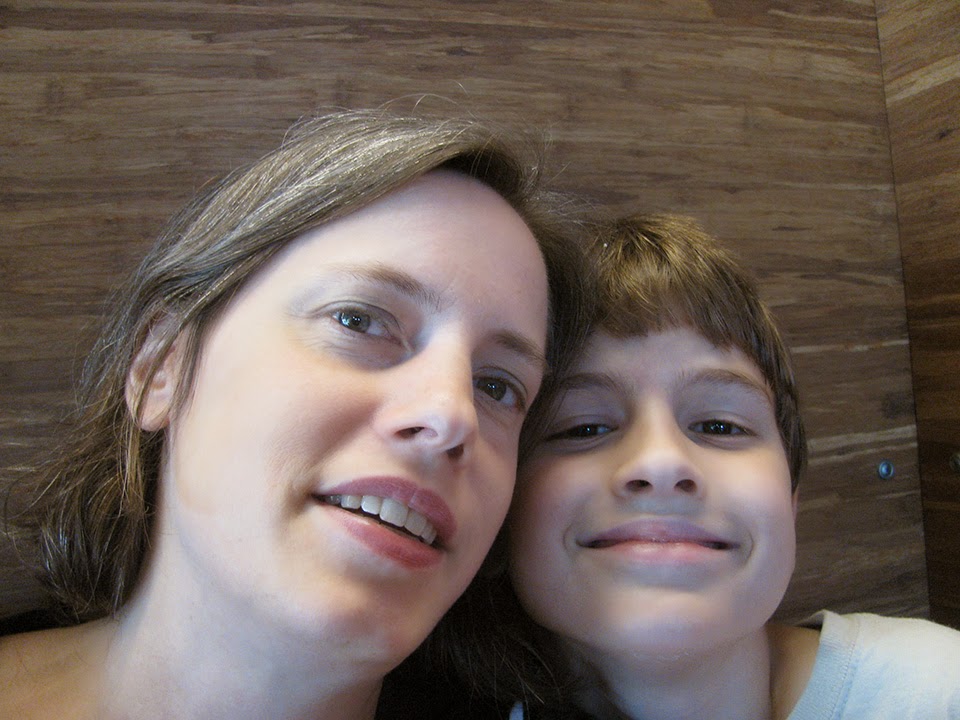 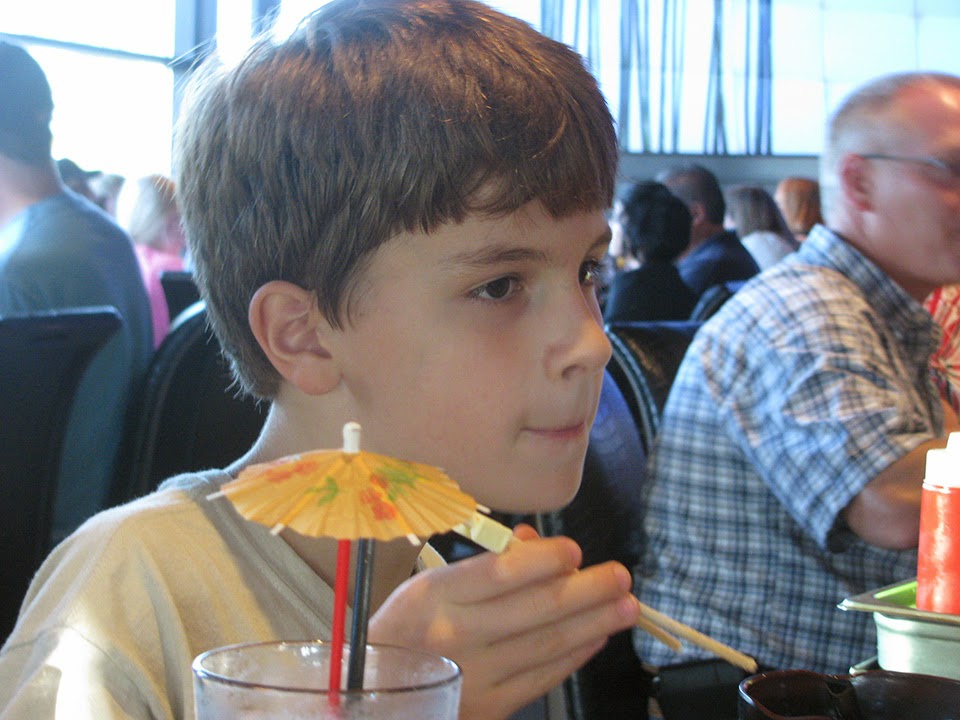 The most entertaining thing to watch all meal was this little guy: 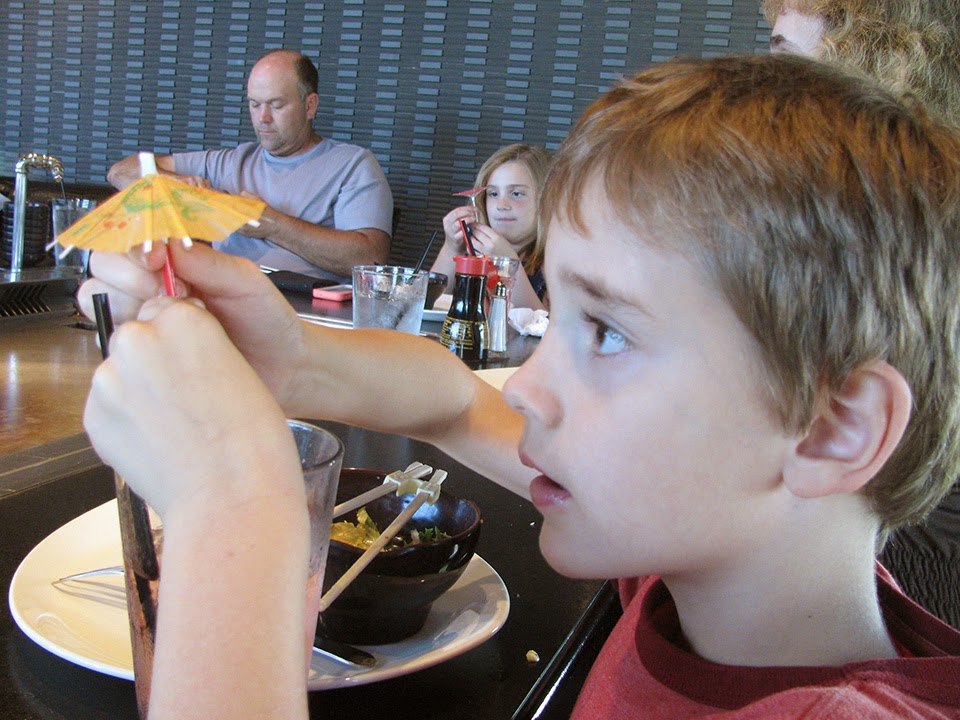 Isaak was fascinated with everything that was going on. He was in awe over his cocktail umbrella. Especially when I told him that it went up and down. Then he mimicked the culinary choreographer. Isaak was slapping his utensils around, laughing, catching food with his mouth, and wowed by the fire. He ate so good! 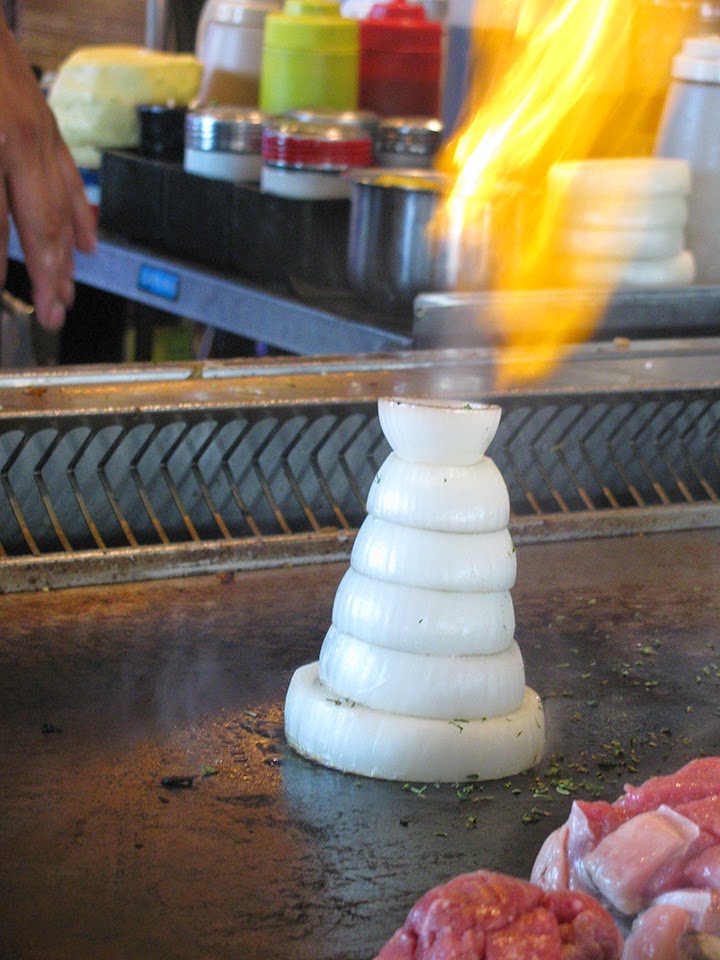 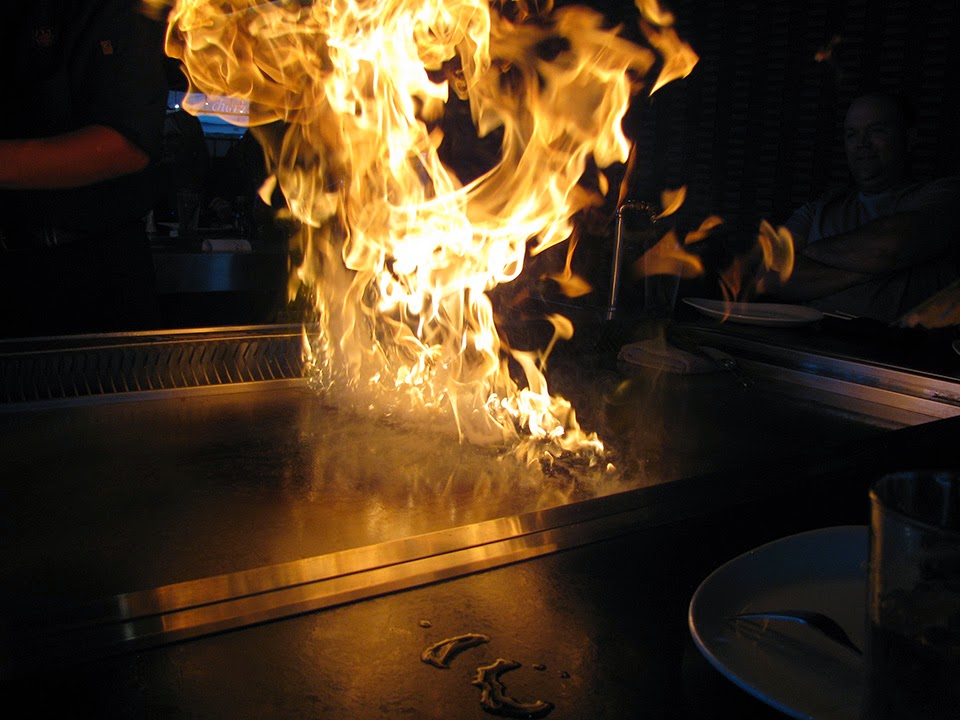 At the end of the meal Isaak put his black napkin around his waist, and said, "See I'm just like that guy that gave me my shrimp. I have an apron to."

Daddy told me not to tell them about it being his birthday. I of course did. 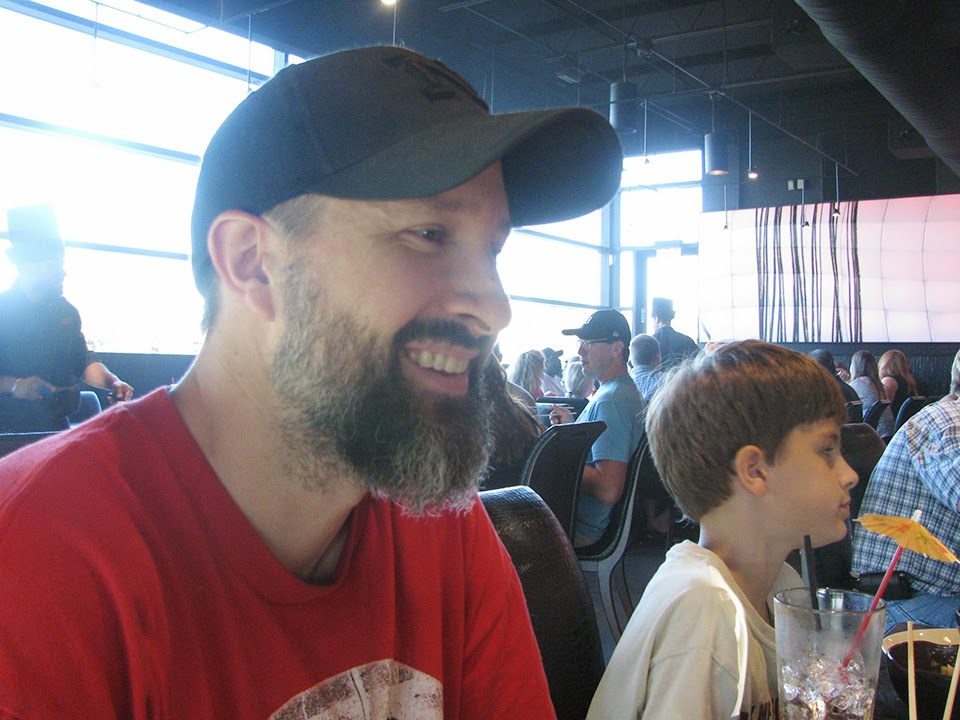 Now comes the part where my new pet peeve comes out. Left overs are a good thing in my mind. I hate wasting food. It's expensive, there are starving people in this world, so if I don't eat what's in front of me I save it for the next day. If you have left overs, you don't have to work so hard to make additional meals. The people that ate beside us left so much on their plates, and didn't take a thing. Daddy ate everything. The boys and I took home a lot. We had enough for lunch, and dinner tonight. The food was so good, why would I want to waist it?