Mica's on another roll of playing with Transformers. They are not my favorite toy. I can't figure out how to transform them. So when Mica says, "Mom I can't get this one into a truck!!!" I stand there with a big question mark over my head. 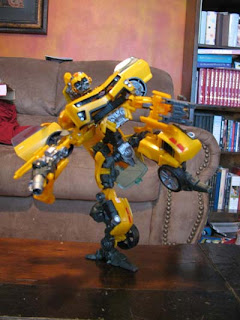 Why can't they just go back to playing with Thomas? His characters teach good lessons. NOPE! Transformers it is. Whatever Mica wants to do, Isaak's interested in as well.

We played Transformers. Mica played the part of, "Bumblebee". Isaak was "Optimus Prime". Isaak quickly wanted me involved. I know very little about Transformers and I quickly followed Isaak's lead and became, "Optimus Mom". I was fighting off the evil germs that were in the house. Really I was cleaning and talking like a robot along the way. 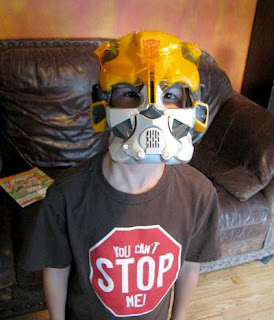 For some reason "Bumblebee" and "Optimus Prime" kept fighting. Aren't they both supposed to be good guys?

They were both being, BOYS.

Isaak was getting out of hand, so he went to rest at 2. Usually I don't put him down until 3. He was battling everything, and we had somewhere to be at 3.

In bed, Isaak kicked his wall. I got after him for that. Isaak spit on his bedding. I have no clue what that was about and I got after him for that as well. It was just a naughty behavior day for Isaak. Off went his sheets to be washed. When the boys act like this it's usually because they are tired. Spitting isn't normal behavior.

We went over to see yet another new baby. My cousin Brent was in town. They had their baby 3 days after my cousin Brad and his wife. Two babies 3 days apart. 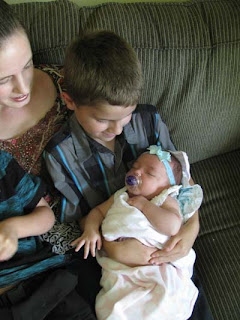 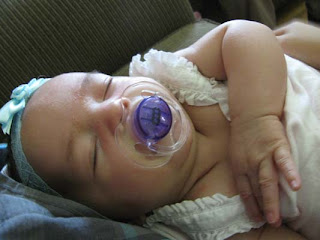 After holding little Brooklyn, the boys went outside to play. They were a sweaty mess when they were done. They played hard with their cousins; plus it was hot outside.

We went home, I gave them baths, brushed their teeth, and they did the neti pot.

Isaak thanked me for sweeping his floor and making his bed. He had a total behavior turn around.
Isaak was off to bed. He went down without a fight at 6:30! That boy was tired!

Mica was about to follow Isaak's lead. He was laying down. I said, "Mica it's kind of early to go to sleep, why don't you come help Mom make bread and clean?" He he did.
Posted by An Apel a Day at 9:06 AM

What a day! I'm glad he a total turn around. I know days like that are hard, when little ones and battling everything. Some days I'm ready to take a nap whether my daughter is ready or not. Also, The little baby is so cute!

We totally have days like that. For Britt, a little more often than I'd like! Brooklyn is so pretty and love that name! I love Transformers! Hee hee!

We haven't discovered transformers yet in our house. Maybe that's a good thing?

You sure packed the day full!

I hear you on the transformers. They're too puzzle-y!

transformers are fun.. but i cant ever figure them out either