Warning there's a cuss word in this post. So if you are reading this in front of a child that can read, STOP and read it later.

This weekend we went to swimming lessons, per usual. The swimming program leader had me fill out an evaluation. I started marking it up. Most everything was good, not excellent, but not horrible or bad either. Then I got to the backside and it had a spot for comments. 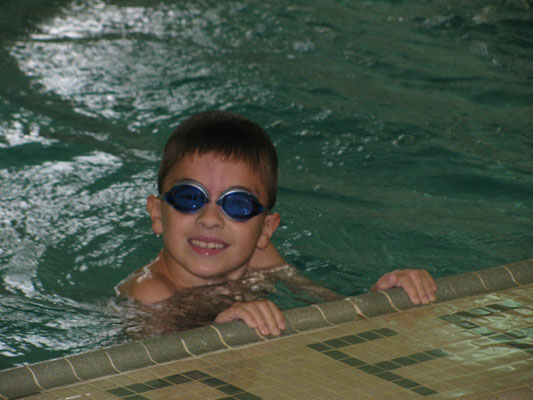 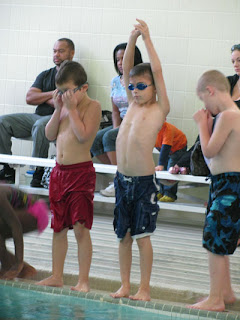 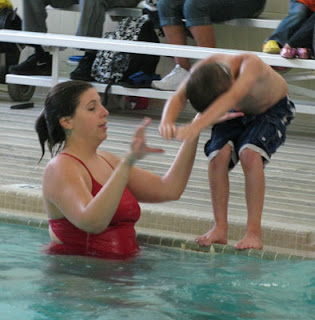 So I wrote about:
As I'm writing the head coach comes to sit down beside me. She says,

"I can see that you are writing a lot...can we talk about what is wrong?"

My face probably turned 3 shades of red because I was put on the spot. I simply told her what I wrote and explained that I'm a teacher, an artist and a blogger, I like to write. I said, "I have just as many good things on here as things to work on."

She mentioned, "Well we talked about how Isaak can't move up because he's only 4. Age wise he can't."

I said, "Yes we did. That doesn't make the problem go away though."

She took my evaluation and walked out of the room.

I was thinking, Hummm...did my evaluation really piss her off, or did she just have to go put the evaluations some place?

My positive, and happy mood went out the window. It was on my mind the rest of the weekend. At least I can look back at Mica's smiley face and smile myself.

This image that one of my students put up on Facebook came to mind:

My face turned red not just because I was on the spot. Memories of me being cornered all came together. At one work place I was called into the bosses office because I wrote a lot on an evaluation. He questioned if I liked my job or not. I did. I just had a lot of things happen that year. Changes both good and bad. After that I wrote as little as possible.

My thoughts are this: If you are asking for an opinion I'm going to give you one. I'm going to think of the great things and the things that need to be worked on. I'm going to say them. I want places and people to get better. Nothing is perfect. I as a person need work. I have good qualities to. Everything and everyone is like that.

I called Daddy as soon as I was out of there; and told him what had happened. He told me that his co-worker filled out an evaluation on a dental student. She marked average on just about everything. The girl was going to get kicked out of dental school. Why? Because she was marked average and not great or perfect. She was rightfully in tears. His co-worker had to call and talk to the school. Since when did average mean bad?! Isn't the purpose of going to school, is to get trained to get better?

Then I talked with a guy at work about this. He told me that he filled out an evaluation for Toyota's service. He was annoyed because he had it in to get an oil change at 11:30. It was 12:30 and they still didn't get to it. He went out and asked about it. He said, "If you wanted me to get it in at a certain time, you should be ready to work on it then. It doesn't take that long to change oil in a car. Give me the stuff and I'll do it in 10 minutes." The maintenance guy said, "We can't do that sir. All places are like this." My co-worker said, "They don't have to be. I have to be back to work, and you haven't even gotten to my car!" So when they gave him a evaluation to fill out  he tore the time issue apart. The manager called him and said, "I thought we had this worked out sir!" My co-worker said, "We talked about it, but didn't work it out." For the record, Honda maintenance is just as bad! I always felt that way, but just didn't say anything. Maybe I should have.

Why do people have you fill out an evaluation if they only want to hear good in things? Should people's jobs, schooling be effected based on one single bad evaluation? Seems kind of silly to me!

Then I wonder if I'm the only one that writes a lot in evaluations? Maybe I'm too critical. Maybe I'm not. Maybe they just need to put on their big girl panties and big boy underwear and take the criticism for what it's worth. How do we get better if no one says anything?

For the record if I absolutely did not like something or someone; I'd remove myself from the situation or the person. I really like the Y and I like Honda. If I didn't I wouldn't continue a membership to the Y and I wouldn't own 2 Honda's. That still doesn't make them perfect. Nothing is practically perfect in every way except for Mary Poppins. If I truly got to know her, I'm sure she could have improved herself as well.
Posted by An Apel a Day at 11:56 AM

I think you did well. The point of an eval is to get honest feedback. You gave that.

I say if they can't take the heat, get out of the effing kitchen. I am with you... why would they ask if they don't want to know the truth???

I can't wait to hear what happens next. Sometimes the squeaky wheel gets the grease.

we just bought a car at Toyota, The sales person told us if we can't mark excellent on everything to please call her so we can work it out. She said if she does not get excellent, they can fire her for poor performance. That is totally wrong in my book.

I totally agree with you. If they don't want constructive criticism, then they shouldn't ask for an evaluation!

Nice post. I learn something new and challenging on websites I stumbleupon everyday.
It's always useful to read content from other authors and use something from their sites.