I have to say that Isaak's bounced out of his troubled times. He's been much easier to deal with. It was like a few weeks of a crabby 4 year old. Now he's better. He still is doesn't like us out of his sight. He's going though some stranger anxiety. For instance I was down stairs doing laundry. Isaak freaked out because he didn't know where I was. It's that kind of stuff. At least he's not having temper tantrums like he was a few weeks ago. The boy hasn't wet the bed for months now! :) We're so happy about that!

Isaak is very into wanting to write. It's really cute! He asks how to spell things all the time. I can't always tell what he's wrote, but he's getting better!

Last week we had Isaak's preschool conferences. This week we had Mica's 1st grade conferences. Conferences were strange with Mica. I've heard my co-workers say that conferences are boring. Now I get what they are talking about. Mica's teacher just said, "He's good at pretty much everything. You guys are doing a great job with him. She showed us a folder of papers and that was it! He loves art, writing, technology, music and P.E.

The only thing that stood out was a self evaluation they did. They colored things yellow if they felt they did good with the topic, orange if they were just ok with it and red if they need to work on it a lot. The thing he colored red was listening. His teacher said, "He listens really well in class!"  I think Mica gets so involved in things that when he's told to do other things, he has trouble changing his mindset. I think that's pretty normal for any boy his age.

Mica also got a yellow stripe on his belt for jiu jitsu. They do stripes before changing the color of their belt. His Sensei also started handing out stripes for good behavior type things the kids do. A few weeks ago Mica got one that says, "Good Discipline". This week he got one for, "Good Form". His Sensei doesn't pass the word stripes out often, so it's great that he got these! 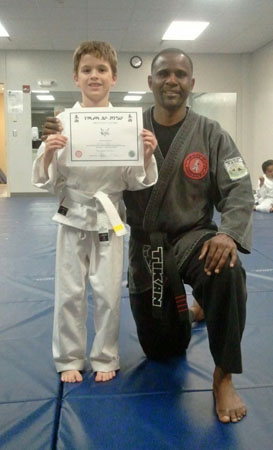 I think parents need stripes as well. Or chocolate.

How about some chocolate stripes Mom? You're doing a great job!

No kid listens all the time - and that's totally normal. It's what makes them kids.

The yellow stripe is awesome. My 8 year old is starting karate (krav maga) next week actually. I hope he likes it.

Yay for not wetting to bed. That gets old after awhile having to always be doing laundry.

Congrats to Mica, I bet he is very proud.

My son also had a lot of anxieties at a young age. Thanks goodness they outgrow a lot of fears! There are always different problems that kids go through. We have to focus on the fun and good things like you mentioned.
twinkle at optonline dot net

I like the self-evaluation idea, that sounds productive in more than one way!

congrats on the stripe!!!!!!
I love the self evaluation idea...