Somehow this week is going way easier than I thought. Our plates are full of things to do. Somehow it's getting done. Then little surprises pop in. Some shake things up, some don't.

Work has been drama city. I had one student drop out early this week. She had a lot going on in her personal life; some of which I knew about, some of which I don't. Here it is close to the end, and she just dropped out. Her mom and her were fighting in the classroom. It wasn't pretty. When the mom left, I hugged the student and said, "When or if you are ready to talk, we can talk." Later she came up and talked to me. I didn't side with her or the mom. I just said, "Listen sometimes moms and daughters need time-outs from one another. She might be mad for awhile. She has a right to be upset. Just like you are upset with yourself, she's having a hard time swallowing things. She'll forgive you. You will move on. Life gets in the way sometimes." She seemed to understand what I was saying. Then she thanked me.

The student that I thought/think he has Aspergers has been great this second part of the semester. He hasn't had any real emotional outbursts. I happened to snap at him this week though. He listens, but not to the things I want him to really take in. I kind of blame him for this. I only blame him because I know he doesn't read his handouts, or take notes. Inside I think he has problems. At the same time I know he needs to learn how to function outside of his first year of college. The teachers in 2nd year don't go over things as much as I do, they don't tolerate excuses what so ever, and school only gets harder with web, 3D animation and video thrown at them. When he walked up to me this week and had his document set up all wrong, I gave him a piece of my mind. I didn't yell at him, curse at him, I was just to the point about how I covered this twice and it's in their handout. I expressed how I expected more. Somehow in the depths of conversation another student slipped that this man boy is going to be a father. I wanted to say, "What? You are not ready for kids!", but I kept my mouth sealed. Sometimes with students it's like having kids of your own; you want to know everything, but you don't. For some odd reason we have a lot of pregnant folks in this school right now.

We have an older student in one of my classes. Most of the students come straight from high school. He's always been a little different. He's in his early 50s. He was going to drop out of school recently. Instead he decided to distance himself from his whole class by sitting somewhere entirely different. It has something to do with one girl in the class. The thing is, is I've been there all year; I've never seen her bother him at all. In fact she's very nice. Everyone is really quiet in that classroom. It's all very odd. As an outsider I see an odd obsession going on there.

Just when I thought things couldn't get more odd, things got better.

I had portfolio reviews a few weeks ago. Many didn't do as well as I would have liked. Their pieces weren't bad. It was just the layout of their images on the page, and the order of their images. I spent a day writing and writing changes. Then I copied them, so I'd have a record. The only real power I have over them is with a grade. I graded their portfolios. Their resumes were horrible. Someone is supposed to go over those before they get to me. I'm sure they did, but didn't make them change things. Programs were spelled wrong. I get it programs are spelled odd (Power Point PowerPoint, Quark X Press QuarkXPress and Indesign InDesign), but if I'm seeing these things, people that would hire them would see these things as well. They had 2 weeks to make them better. If they didn't do anything, then their grade dropped even more. If they fixed up things dramatically their grades got better. Guess what? They all fixed them! :)

I had a student create this on Facebook, and tagged me: 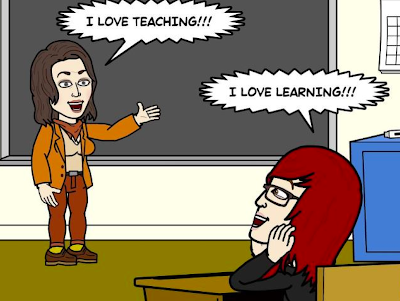 BTW I know it's not a policy at many school to friend your student on Facebook. I don't ask anyone to be friends. I only except if they ask me. It's a private, college school. I'm very careful about what I say on there. Really I only talk about my kids, or he news. Then I don't get into trouble. I don't hang out with them outside of school.

I know it's silly, but my student making this made my day. It made all the odd things go away. The girl that made it is a great student. Just like anything, there is way more good than bad with things. I have a lot of wonderful experiences in my job!
Posted by An Apel a Day at 9:37 AM

Crazy goings on over there, huh? That was a sweet gesture on your student's part!

awww.... how sweet. You must be making a great impression on her. As for some of the kids, I bet it is almost like babysitting.

I can see where you would want to get to know the students more personally. I do that with my girls friends. I want to know all about them, but then again, I don't. They like to send me FB friend requests, then I find myself wanting to lecture them on the crap they put up there. However, I do keep my mouth shut.

What a sweet thing for the student to send to you. It's nice to know that you are touching the lives of those you also teach :)