I Just Got Back From a Weeks Vacation

We surprised the boys by taking them on a weeks vacation. I packed, while they watched Magic School Bus.

I had some posts scheduled, but had no access to the internet. I will get back into the groove of commenting back to those that commented here. Plus I will post about our trip.

Of course it's raining like crazy back at home tonight. People are losing power here in Nebraska, so I don't think I'll be able to comment on anybody's blog tonight.

The boys had no clue where we were going until we got there. We kept dropping hints, but they weren't catching on.

Last year we went to Chicago by train. I know Mica wished we went by train to wherever we were going. He loved it so much! The year before we had a Staycation. It was the year my nephew was born that has trisomy 18. We weren't sure what was going to happen with him. Plus I didn't want to travel too far with a newly 3 and 5 year old. We ended up having a wonderful staycation. Much better than expected!

This time we had a very country trip. I was even a redneck by filling up mason jars for the boys to drink from. It worked out so great! I hear that drinking out of plastic sitting in the sun is so bad. Who really knows if that is true, or not. I'd rather be on the safe side though. For the record, not one broke. 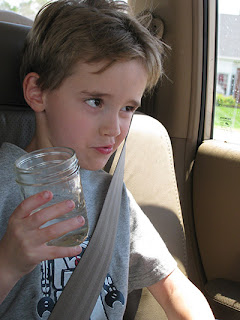 From my seat, I could see Isaak best. I got the most car pictures of him. He was the one I had to occupy the most. Mica read almost the whole way there.


Did you know they make window markers now? 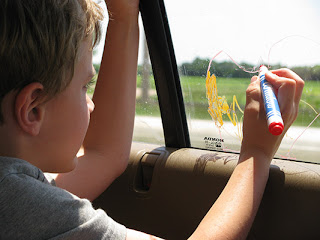 We drove across Nebraska, and made a pit stop to a place called Carhenge. It's a little odd to many, but kind of fun to see. I think they'd make a fortune if they sold in their little gift shop Hot Wheels sprayed and arranged just like the cars we saw.

We first stayed in a little cabin by Fort Robinson on Ponderosa Ranch. It took all day to drive there. It was literally in the middle of no where. It seemed like we were on Little House on the Prairie. We stayed there for two nights. It was so pretty!


City boys chased the owner's sheep. They were very tame. The boys did not hurt them. 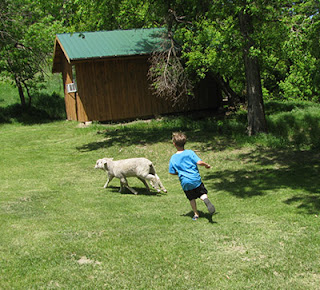 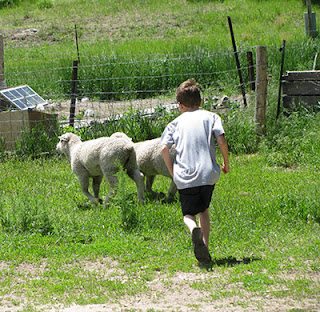 This is what our cabin away from home looked like: 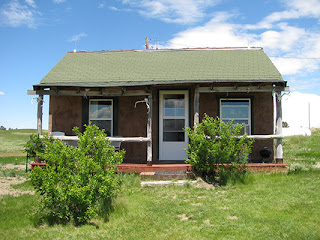 But our view was even better! Acres and acres of grassy hills. Where we live in Nebraska, there are not as many hills. Mica swore we were in Indiana at this time. We still didn't tell him where we were at. We kept dropping hints. Isaak on the other hand could care less about where we were; just that we weren't in the car any longer. 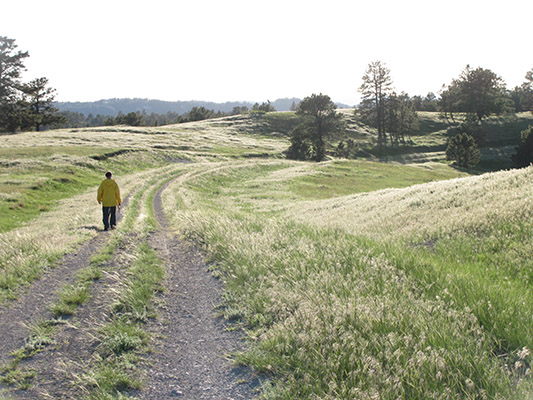 I'll have more to tell. We went up Fort Robinson in a jeep ride. Boy was that windy! I'll share prettier pictures later. 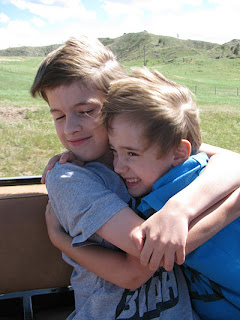 After that we went to Toadstool Park in Nebraska. It's much like the Badlands of South Dakota. This made me nervous. The boys wanted to climb and climb. I'm afraid of heights! I stayed low looking up at the cool place. I freaked out especially at the idea of the boys falling! I kept getting called, "Chicken". For the record Isaak only fell on the path that was on the ground. 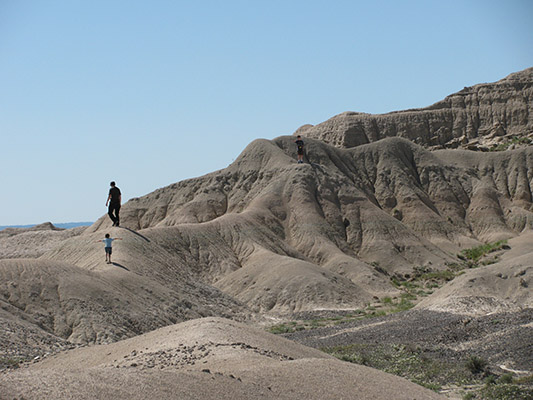 Onward we went to South Dakota.

We stopped at Hot Springs to see a Mammoth Dig Site. 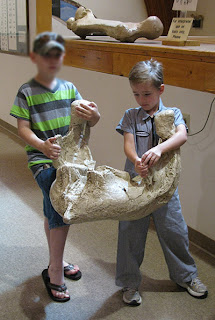 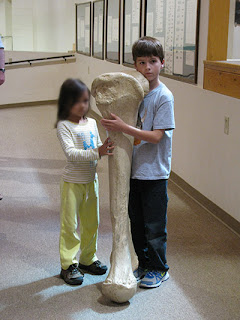 We saw Crazy Horse. That's where I almost lost my camera! 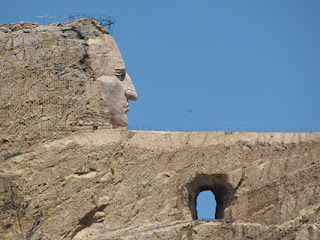 We stayed the rest of our trip at KOA Campground. They had a water slide, paddle boats, movies, swimming, a hot tub, miniature golf and more. The boys ate pancakes each morning they were there. They both ate all three. Pigs!

We saw Mount Rushmore 3 times. Once was a drive by, another was a walk right up to it, and the last time was to see the lighting. The lighting was so overrated. I thought it would be a laser light show like they do on Stone Mountain in Georgia (same carvers). NOPE! They just show a movie and light it up, then say all the military people's names. Sure it's honorable. But fun for kids, not. Grandma said I enjoyed it when I was little. Isaak fell asleep, and Mica kept asking when the light show would begin even after they lit the statues up. I was thinking the same thing as Mica. Even I was bored when they said the military people's names. It matters to them and their families. It was cool seeing them all stand up there. Will I remember their names, or what each of them did? NOPE! It was funny that Mica asked if Marack Obama would be added to Mount Rushmore? 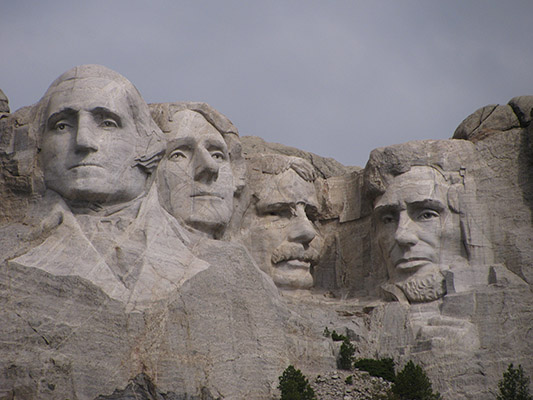 We drove through Custer State Park. 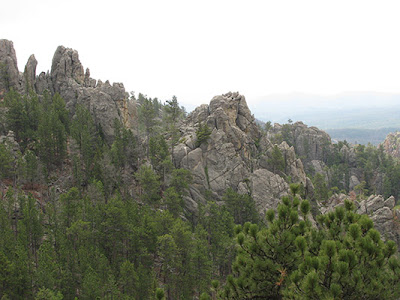 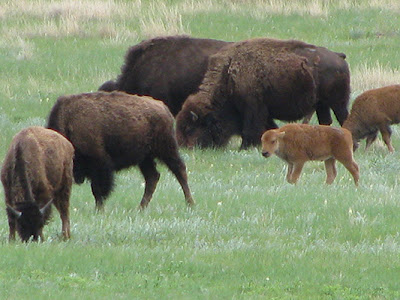 We went to Wind Cave. 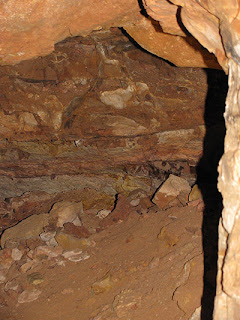 Went to Wyoming to see Devils Tower. The boys didn't want to stay on the trail. They were all about climbing the rocks. 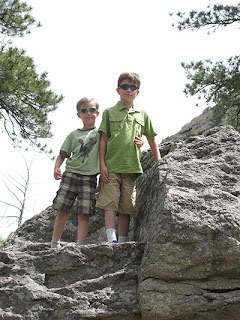 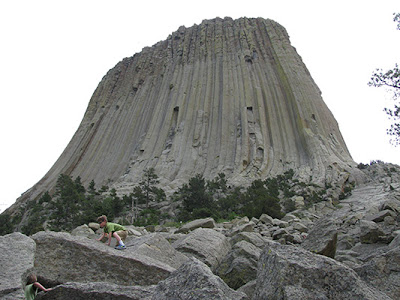 Our last day we drove back to Valentine, Nebraska and saw Nebraska's largest waterfall in Smith Falls State Park. It isn't that large, but we're not known for our waterfalls. 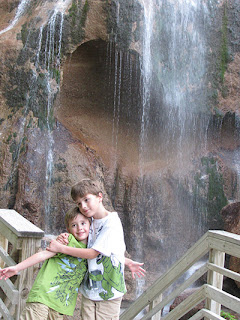 Then it was another full day of driving.
Posted by An Apel a Day at 11:30 PM

Oh my goodness what an amazing vacation this must have been!! I might have to add this to my travel bucket list :-)

Wow, you sure made me want to take a vacation there! It looked so peaceful and relaxing! Definitely the kind of vacation I think you needed :)

Wow!!!!! What a really cool vacation! You are giving me great ideas! :)

i had NO CLUE that was the same carvers for both mountains...
hmmmm...
looks like yall had a great time (and to tell you the truth, i have heard of carhenge and have always wanted to see it!)

Sounds like it was a wonderful vacation! Thanks for sharing the photos. I had no idea they made window markers. Do they easily wash off?