We celebrated my Grandpa's 87th birthday on my Mom's side. He's the boy's Great Grandpa. Usually I refer to people on her in the boy's perspective. "Daddy" is their Dad, "Grandma and Grandpa" is their Grandma and Grandpa. It can be confusing, especially when it's a lot of relatives in the picture, but this blog started out as being a modern day baby book that just kept going.

Great Grandpa Kent is doing well. He has a few health hiccups, high blood pressure, heart issues and diabetes. For a younger person that's a lot of health issues. For being this old he's doing great! He just can't climb any mountains. His Mom, the boy's Great Great Grandma passed away when she was 92. I was a freshman in high school when she passed away. They must have long lasting genes on that side.

We most of us met up around 3 to go swimming, and then had a pot luck dinner party.

Isaak had to sit out of swimming. He wasn't on his best behavior that day. There was fibbing, hitting, ignoring and telling me that he couldn't help his behavior. I gave him a chance to win back swimming, but that failed to. I'd blame his behavior on the lack of sleep, but he slept just fine the night before. Isaak kept saying, "I can't help how I act." Well he lost the fun of that day because he couldn't help how he acted. My cousin's wife said, "Man you are strong and a good Mom for standing your ground. I just wouldn't be able to do that." I questioned what I had done. Here I was taking away exercise, fun and memories. In the end children have to know they can't do whatever they want. He stayed back with Daddy, hung out with the older family members, and went for a walk. We all have off days though. It was pretty unusual behavior for Isaak to act that way all day long.

Do you ever question what you do as a parent? Sometimes I think we're too hard on our kids, but they are better kids for it.

Back to the pot luck we went. We brought a giant bowl of Couscous Salad. The whole thing disappeared; except for one serving, which my Mom left for the birthday boy. It's good when everyone eats what you bring. I was just surprised that it all was gone. It was a big bowl full. This time I didn't make it with Quinoa, but that is a great substitute.

One thing was really cute, Isaak wrapped up two of his balls to give to his Great Grandpa. Both boys colored cards for him to.

Here's the great grand kids with their Great Grandpa. The only one that is not a great is in the back row by the hutch. She's my cousin, she's the same age as one of the greats, so we had her stand up there as well. My Dad is off to the side holding Mica. He's cracking up over something. Maybe it was the shirtless two year old that's sitting on Great Grandpa's lap. He decided to dip his finger in the cake. Aunt Terra's family isn't in the picture. They are at a SOFT conference for Emerson. My cousin Brent's family isn't there either. They live in KC and have a daughter as well. 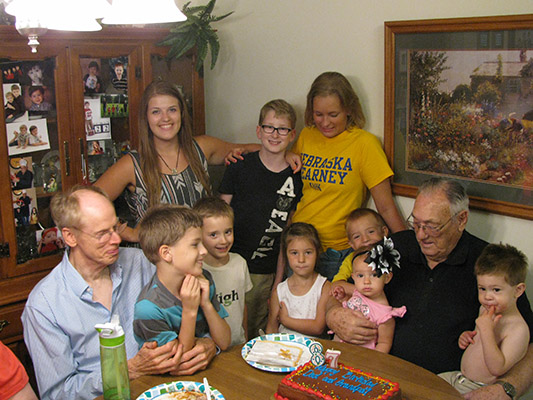 For those of you that are family and/or friends that read this here's the line up starting from the back row: Marsha and Dave's daughter Megan, Angie and Eric's son Ethan and daughter Kailey, my Dad Red, my son's Mica and Isaak, Brad and Marla's daughter Kensley, son Colton, and daughter Corrigan, my Grandpa Kent and Stacy and Ryan's son Alex. *Missing is Terra and Tyson's son's Evan, Elijah, and Emerson, Brent and Chrissy's daughter Brooklyn.
Posted by An Apel a Day at 8:56 AM

Sounds like a fun birthday. You did right standing firm. Its never easy.

He's looking real good!! And happy birthday to him. :) I love family pictures like that one!

it is hard standing your ground... but you have to, you know?
hope he had a great birthday :)

Happy Birthday! That's a great number to get to!

I am the mean mom and do stand my ground. Just recently the neighbor girl spent the night. My girls kept fighting and tattling. After repeated warnings, I sent her home at 11pm. I called her mom the next day to apologize for sending her back so late, and explained that they just weren't behaving. She said the same thing. She was amazed I was able to stand my ground and do something like that. (The mom wasn't mad btw. They were still up, or I never would have let her go home then.) Sometimes you just have to do what you have to do. Does it suck? Yes. But like you said. They need to learn that there are boundaries and you aren't going to cave.

Happy birthday to him! Sounds like he had a great time surrounded by loved ones.
I know it's times like those that make you question your parenting skills, but I'd much rather a parent stand their ground than raise a kid to get their way all the time.

I am not a mom yet Alisa but I agree on standing your ground. Most parents now a days are not tough enough. I always thought my parents were tough on me but it made me a better person today.

Parenting isn't for wimps! It's hard to stand your ground, but that's what the kids need.

So happy for you that you got to spend special time with your family. Enjoy every moment you have. :)