I should mention that all the parents signed wavers to let their kid's photos be used online and on their facebook page.

Mica got his third stripe at Jiu-Jitsu this week. I knew he was up for it later this month, but Sensei has an emergency trip to Africa. I asked if he should test that night, or if he should wait until he gets back? Sensei thought Mica was ready, so he went ahead and tested him.

He had to be able to count to 30 in Japanese, do forward, backward and combination rolls, get away from strangle and wrist holds, and do something that can seriously mess someone up (I can't remember the name of it. The person taps them when it starts to hurt).


Here are the rolls:


Here's the thing that really hurts. I can't remember the name of it. The kid taps when it starts to hurt.


Here's the ending ceremony. Sensei always messes with the kids and their names.


Here's a final photo of Sensei and Mica: 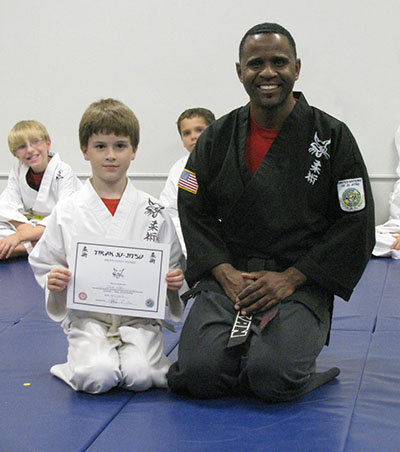 Good for you, and for the kids. Martial arts training instills discipline, and does wonders for a young persons self esteem. There's also the point that while you hope they never have to use it in an emergency situation, if they do then Thank God they have the training. Mine took karate lessons for ten years before they left home. My son still practices and trains, and probably will as long as he can draw breath.

What an accomplishment! So neat!

Dang, that's hardcore. I know a lot of kids enrolled in karate at various dojos in the area (including my two) and NONE of them test the kids so vigorously and I asked around, and none of them make the kids learn Japanese, either. That's intense. Honestly, I wouldn't keep my kids enrolled in a dojo with all that extra work. Learning the forms and the sparring techniques is more than enough for us. The reason we quit cub scouts was because of the extra work in addition to all the work they had at school. Who has time for that?

That's such an accomplishment! I got a kick out of watching him do the backward rolls. For some reason, those are really hard for kids to learn (at least from watching the girls in my daughter's gymnastics class!) He did a great job!