Because of the holidays we had to visit a different Y. It had the same Sensei, but different kids in the class. When he tested Mica was throwing kids, and doing pressure points on kids that he's not used to. That's ok, if someone were to come at you in attack mode you wouldn't be used to them.

Sensei threw a ton of instructions at Mica to do. A lady sitting next to me said, "Goodness I wouldn't remember all that!" Mica's been practicing. He knew what he was doing when it came to the instructions. 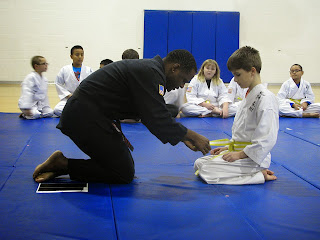 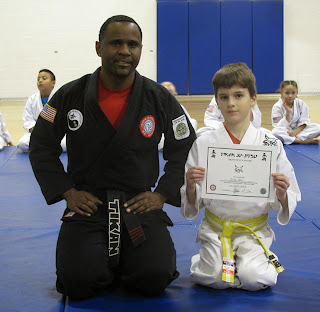 I think it's time we get Mica a new top. His is looking a bit short, and he kept tugging at it.

Congratulations Mica!! Good for him for doing so well. I know it's not easy :)

That last throw looked like it would have hurt :P

He is doing so good! Way to go Mica!