Since we were early the boys were wound up! They were playing with a girl. I had to get after them all, "Stop hitting each other with your towels!" and "This is not a gym. Stop running around." It was pretty funny when they decided that their towels were super hero capes. I can no longer get to swimming lessons this early! 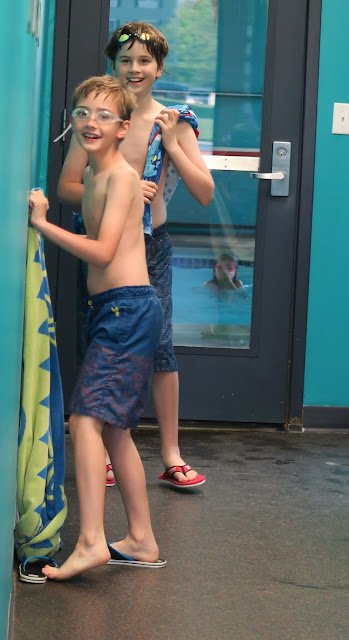 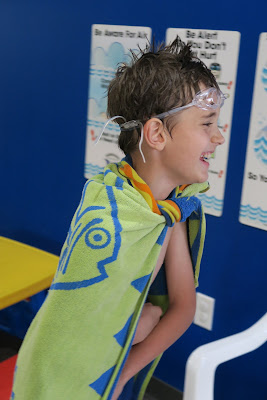 I never really was a police fan.. yeah, I listened, but didn't go out and buy the music....

We just got home from the zoo today.

I think elephants are so beautiful. I'm glad your zoo was able to help them up their weight, but even so, they still look very tiny here. I hope they are able to gain more in the future and have a happy life in their new habitat.

I saw his song sales went up astronomically when he passed. I guess a lot of folks are in the same mode.

The pics are great. I'd be worrying about my shoes too though on the lift. ;)

Theresa the elephants I have on here are the baby ones. I'm not sure if they just look underweight because they are babies. The zoo has fattened them up, since they came to their new home.

I had no clue who prince was, until the news rattled on and on about him. Guess he was not among my pantheon of artists.

The last time I was at a zoo, it was the Nashville Zoo and my kids were about 11 and 12 I think. We walked on the "sky walk" which was a plain board sidewalk on poles about 15 feet above the animals. We saw a White Tiger and that's all I remember about it, really.

When your kids are grown and gone, you will have tons more time but just about every day something will bring back memories of doing this or that with them. You are good parents to make such an effort to give your kids enriching experiences.

The zoo looks really fun. I've been before too when not many animals were out.

Tornado sirens are never a fun experience! I remember many of those scares while living in Kentucky. I love the bumblebee shot :)

I'm in Minnesota, and we're all in shock. He was a gifted artist, and was constantly creating something. I look forward to hearing a few things that they found in his vault.
Looks like you and your family have fun adventures.
Storms do scare me. Mother nature is powerful.
Mary at Play off the Page

The elephants are beautiful. They are one of my favorite animals.

Yes, it seems pretty certain that Prince had a drug problem, but they were pain relievers. A lot of people get hooked because of pain. I read that his hips and legs hurt constantly because of dancing in those high heels. When Michael Jackson died, his autopsy revealed that he had arthritis that was consistent with being a dancer. Dancing is hard on the body. Your boys looks so cute and happy at their swimming lessons. I always wondered about the take-a-shower before getting in the pool thing. Then I read an article that said the shower helps get oils off your skin that if not removed make the pool get dirty faster. I love pellyphants (that's what my daughter used to call them;she might still call them that although she's twenty-nine). I never worry about the weather. I grew up in Kansas. We had tornado watches and warnings all the time. If something terrible will happen, then all the worrying in the world won't stop it. When I lived in Illinois, I admit I was a little freaked out when we had an earthquake. At first I thought a plane flew over too low. Please keep an eye on the pellyphants for us.

looks like a great zoo you have there. Lampung, the province where I am originally from in Indonesia, is famous for its wild elephants :)