Do you remember the poem, Wynken, Blynken, and Nod? I only remembered the name of the poem. That's what I thought about with the name of this post.

Mr. Mica started this thing where he blinked excessively when he was in Kindergarten. His doctor said that some kids get tics. They often times grow out of it. He did grow out of it. Now at age 11 it's started back up again. 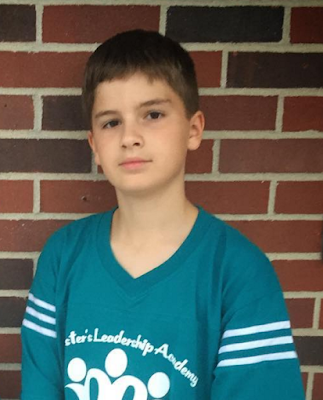 It's not a blinking just when he's tired thing.

I asked him if anything is bothering him, and told him that if anything is in fact bothering him that he should let us know. Nothing seems to be bothering him. I believe him when he tells me that. Mica's an open book kind of kid that really has no filter. Last year when a girl liked him, gave him things, and he didn't like her back he told me EVERYTHING.

It could be allergies. I have them big time, and my boys do get them too.

It could be nothing, or it could be something. I kind of feel like we should do our parent duty, and have his blinky problem looked into.

I made the mistake of googling it. Loads of problems came up.

I put in a message to his doctor's office on Friday night; just to be on the safe side. I got the giggles when I started typing, "My son blinks a lot..." I said, "Travis please take over because I don't even know what to say." It just sounded really funny. Travis made it sound good.

We also notice that he squints when watching TV.

The doctor's office responded with, "Dr. Harrison should see him."

I was looking more for the response, He'll need to see an Opthamologist. Here are a few sources: ...

Don't get me wrong I love Dr. Harrison, but he's not an eye doctor.

I called this morning, left a message saying everything + leaving Travis' number. My phone works horrible at my work. Reception in general is bad at my work.

The doctor's office called me back. When I couldn't answer they called Travis.

It's as if they didn't listen to my message at all. Travis had to repeat everything I said. Then the nurse said, "I'll have to run this all by Dr. Harrison to see what he has to say."

We're stuck in blinky limbo land with the doctor's office.

Have you ever had eyesight, or eye problems?

Renae at HOME WITH SHOES said...

Alissa! Thanks for being my first 'comment' gal. It is great to be back and I love the new name of your blog. Well, new to me anyway. It feels so good to be back. It really does. Whoa!

Haven't had eye problems other than regular age issues. But I have certainly had problems with being jerked around by my doctor, who recently sent me to an expensive specialist for a problem she didn't even tell me I had...

I wish I knew what to tell you.. but I can tell you this..
STAY OFF THE INTERNET!
Broxton was having pains in his legs... I googled and FREAKED thinking he had childhood cancer... After the doctor (and xrays) it was determined growing pains.
Google can be the devil.

It probably wouldn't hurt to see an eye doc for a second opinion. I hate making unnecessary appointments, but this sounds like it would be in his best interest.