On Friday Isaak had invited over 5 friends for a pizza party. 1 of Isaak's friends has an older brother in Mica's class, so we included him as well. In all 4 kids were added to our 2, and 1 friend was only there for about 20 minutes. It was a super low key party, and I loved it that way!

I wasn't going to make Isaak was pretty excited!

One of Isaak's best friends is on his basketball team. When I saw him earlier in the week he said, "Alissa I can't wait for your Lego Gummy things that you make!" I wasn't going to make Lego Gummies, but when he put it that way I kind of had too. They really aren't that hard to make.

Isaak's best friend grabbed quite a few Lego Gummies and said, "I'm making a Trump wall that I can destroy by eating each block." Ok then! 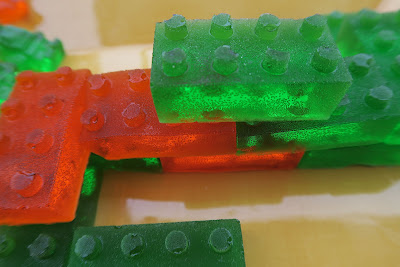 For the record Isaak's friend only took about 5 Lego Gummies. This is from an old picture.

We were talking about summer school, and Isaak's same friend that was mentioned above said, "I do like education, but not something that's gonna destroy my lifestyle." We were cracking up! Later when I told his Grandma she said, "What lifestyle does he have?" Ha!

We were beginning to think Isaak's friend from Argentina wouldn't show up. He came about 30 minutes late. The poor boy didn't feel well. He had a huge sinus headache. They were super kind to drop off a gift. Isaak handed Ben a piece of paper and said, "Draw." Ben smiled and drew an airplane. When he Ben left Isaak said, "You know Benjamin is just like me." Travis laughed and said, "How?" Isaak said, "We have the same personality. We both like art and sports." Travis said, "You left out the part that he barely speaks English, is from a different country than you are from, and has sisters." Isaak said, "Ya."

We kept the kids entertained while the movie Mr. Peabody and Sherman was going with pizza, brownies, ice cream. We picked that movie

I decided to get out a mason jar, put the kids up step stool height, and had them drop clothes pins in the jar. So many didn't make it. It's much harder than it seems.

We also put square pillows in their shirts to have them "Sumo Wrestle". They certainly had fun doing that! 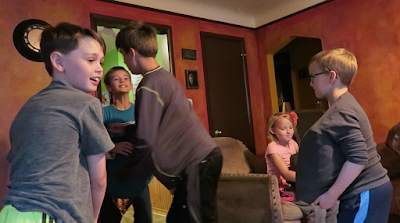 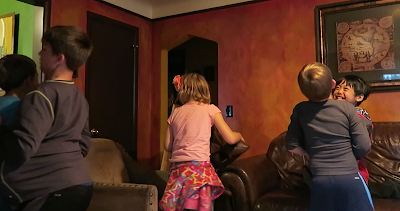 Sounds like a successful birthday party! So many times I've been wrangled into making something extra because someone made a comment they were looking forward to it (cookies, pie, whatever lol) The sumo wrestling looks like a huge hit too :)

Looks like a fun pizza party to me. I'm with you, low key is far better than stressed-out high key. ;) Pillow bopping? Always a hit with boys. Pun intended. :)

I would consider all of ours low key.
For Broxton we just rent a play place and let them play.
Pizza and cupcakes and its over.
For Savannah, just family and a cookout at the house!