The boy's last camp was last week. It's an outdoor camp at Hummel Park. The kids get dirty, they cook over a fire, play outdoor games, hike, go on obstacle courses and much more.

Isaak went on the obstacle course and decided it would be a great idea to go under it. His whole group was cheering him on. He got so muddy he couldn't see. He rolled around in the dirt and sand. They nicknamed him, "Breaded Chicken". He had to be hosed off before they'd let him on the bus to go home. If he only knew that his brother got a huge rash from mud one year. 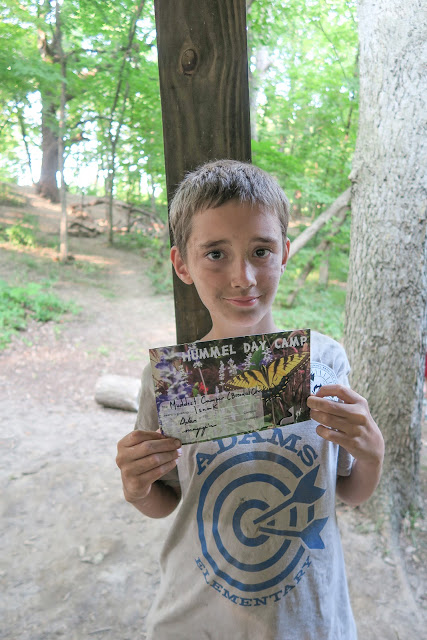 Isaak went on and on talking for 40 min. about his first day of camp. He told me every detail!

Mica complains about Hummel Camp before he goes there. He says he doesn't like the outdoors, and reminds me every year about the rash he got from the mud. Every year (minus getting the rash the one year) he's gone he enjoys it.

Mica wrote a camp lunch song to Led Zeppelin's Black Dog. He was really excited about it. Poof! His excitement was ran into the ground when he got to camp, and realized no one knew his song. :( He came home and said, "Mom people my age just need to be more cultured."

Neither of his camp councilors must have known the Black Dog by Led Zeppelin either because they game him the Beatles Award. LOL! 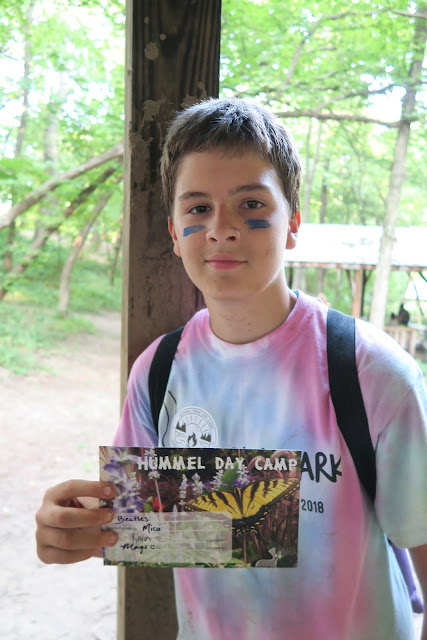 Mica did however win what all camper's aim for, The Hummel Cup Award. It just means that you kept your campsite clean, followed rules, and aimed for camping success. They just get to run around the camp with a big trophy, and that's it. To them it's success. Here's my nephew Evan and Mica running around the camp following their Hummel Cup trophy. 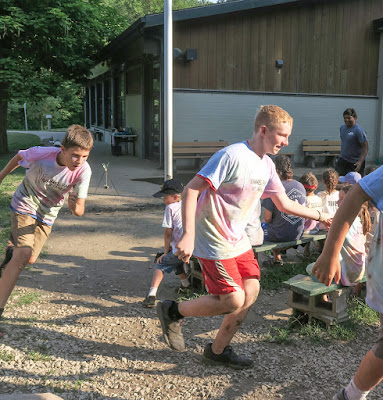 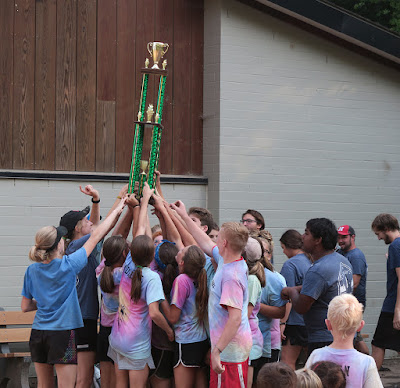 Have you been hiking this summer?

Kids know the Beatles more because of games and such. Led Zeppelin never really did movies and merchandising as much.

The Beatles Awards lol! That's nice that he won the Hummel Award too though!

I haven't been hiking this summer, unless you count walking around Irish countryside here and there.

Your boys are adorable! LOL @ the awards!

Ahhhhhhhhhh Camp... those were the days & they were tons of fun & we learned so much! Thanks for sharing. It surely looks like they had great fun too! Have a great week! I won't be around next week due to some 4hr. back surgery I have to have on the 22nd!

To be fair, I probably wouldn't have known the song either. I'm not good with tunes, song names, and artist names. I might get one right, I might be able to hum the tune or sing the song, or I might not know any of it. Does Mica play an instrument?

Isaak looks pretty clean for having gotten so muddy! Bet he loved getting hosed off!

Glad they had a great first day of camp!

Muddiest camper? Do you get an award for the laundry? ;)

That is so cool. What a fun camp. Thanks for hosting and I hope that you have a wonderful week.

Camps are so good for kids they love the camaraderie and aking new friends, not to mention all the fun stuff!!

@Lydia they should give an award for laundry. At least they for the most part did their own.

@Mandy Mica plays the trumpet and Isaak plays a violin. The photo was from a different day of camp from the muddy obstacle course. They get dirty and muddy every day of that camp.

Seems like fun! I've always wanted to go to a summer camp like what you guys have in the States.. but we dont have them here. Too much responsibility, or maybe not viable to hold such camps, maybe? haha

Hokey smokes that trophy is huge! No wonder they wanted it. :) That's funny they gave him a Beatles certificate, lolol Not even close to the same sound in music. ;) Glad they all had fun.