Our kids had a summer challenge. It was to plan and cook a meal. The boys picked rather expensive dishes. Isaak made Szechuan Shrimp, and Mica picked to make Gyros.

I've had this written for a long time, but never posted it. I'm not sure why. I assure you, he made this during the heat of the summer.

There's a few things Mica learned in the process I hope:

1. Read all he ingredients before getting the ingredients. He read it, but we had to go back to the store twice to get extra things. One of the things was that he had a cucumber, but the recipe needed a few for the Tzatziki Sauce. He also didn't account for how much lemon juice he'd need.

2. Plan for more than just the main dish. It was a difficult day because he kept saying that he only wanted to make Gyros. That's all he had in his plan, and he was sticking to it. I told him that he needed a side of veggies at least! He wasn't having it, so we had to talk.

That's part of the learning process. A big reason why we made the summer challenge was to learn. 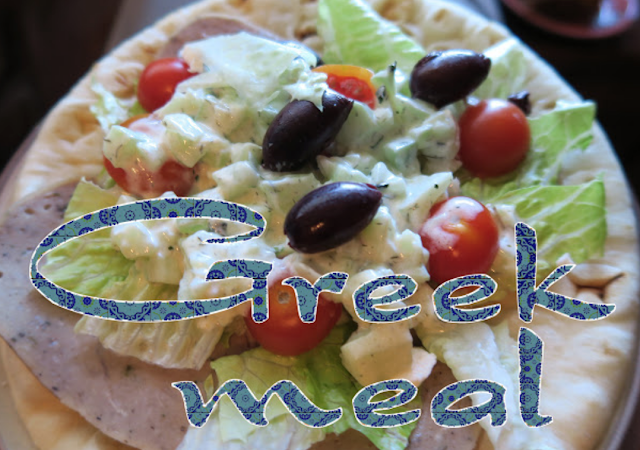 For the Most Part Mica was in Charge. I did help him with things. I made him read the instructions, and had him tell me what to do.

We started with the washing, and chopping the veggies, for a side dish. Mica wasn't at all excited about this process. He kept reminding me that he only planned to make Gyros. He's a fantastic kid, but we bump heads at times. I pretty much washed, chopped, and made him spray the pan, and use a butter along with lemon pepper seasoning. 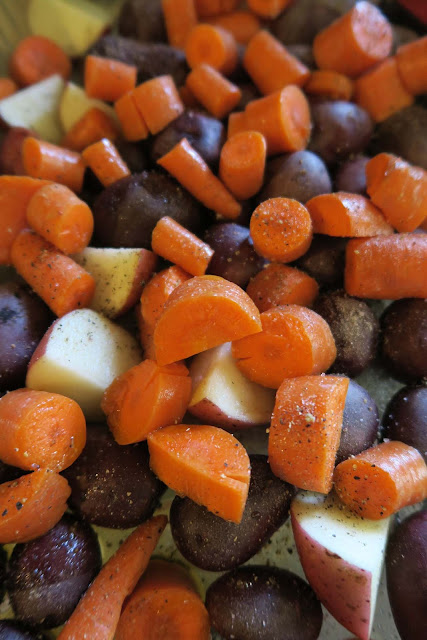 Mica was excited to make Baklava, that is until he started it:

One of the stores we went to were out of the pastry typically used for Baklava. We got a thicker pastry. I said, "It will taste similar. It just won't be in as many layers." I did roll the dough out more.

1. Thaw phyllo dough according to package instructions (this is best done overnight in the fridge, then place it on the counter for 1 hour before starting your recipe to bring it to room temp). We used Puff Pastry Sheets because it's what the store had. 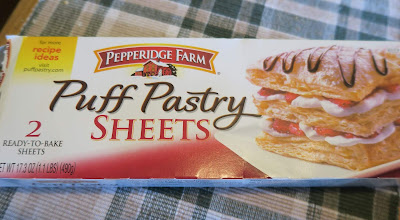 2. Trim phyllo dough, or roll out more to fit your 9x13 baking pan.

3. Butter the bottom and sides of a 9x13 non-stick baking pan.

Start with your honey sauce (which will need time to cool as your baklava bakes):

1. In a medium saucepan, combine 1 cup sugar, 1/2 cup honey, 2 Tbsp lemon juice, and 3/4 cup water. Bring to a boil over med/high heat, stirring until sugar is dissolved, then reduce heat to med/low and boil an additional 4 minutes without stirring. Remove from heat and let syrup cool while preparing baklava. 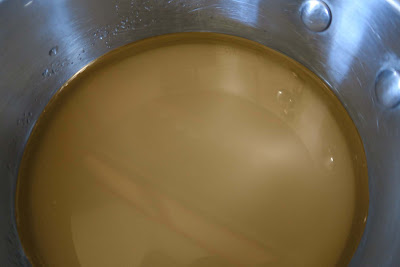 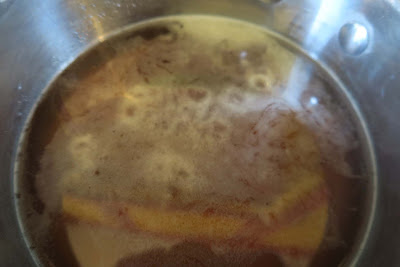 How to Assemble Baklava:

1. Pulse walnuts about 10 times in a food processor until coarsely ground/ finely chopped. In a medium bowl, stir together: 4 cups finely chopped walnuts and 1 tsp cinnamon. 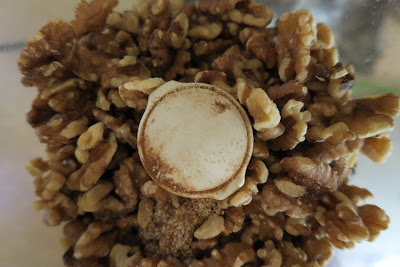 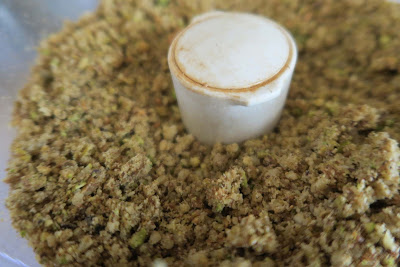 2. Place 10 phyllo sheets into baking pan one at a time, brushing each sheet with butter once it’s in the pan before adding the next (i.e. place phyllo sheet into pan, brush the top with butter, place next phyllo sheet in pan, butter the top, etc. etc.). 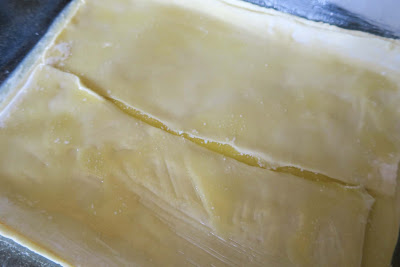 Keep remaining phyllo covered with a damp towel at all times. Spread about 1/5 of nut mixture (about 3/4 cup) over phyllo dough.

3. Add 5 buttered sheets of phyllo, then another layer of nuts. In our case, since there wasn't a lot of dough, we repeated this x2, but with traditional phyllo you Repeat x 4. It's much like a lasagna, you just keep layering things. 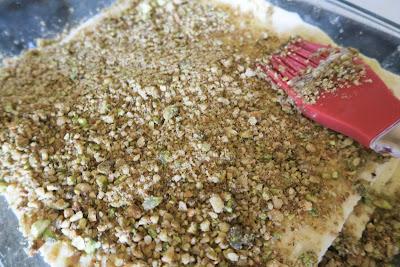 5. Remove from oven and immediately spoon the cooled syrup evenly over the hot baklava (you’ll hear it sizzle). This will ensure that it stays crisp rather than soggy. Let baklava cool completely, uncovered and at room temperature. Start to pour the honey mixture over it evenly. 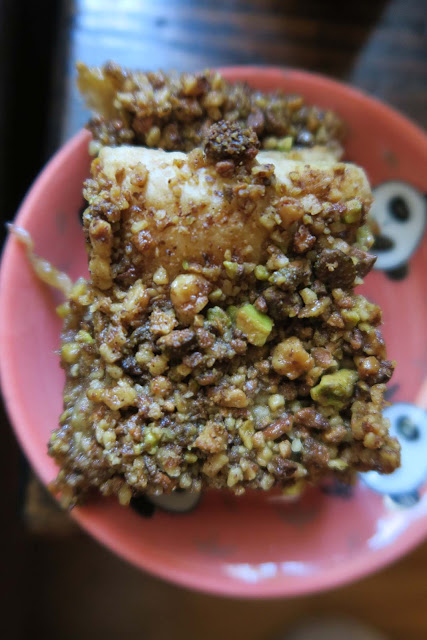 I helped Mica put together the Tzatziki Sauce:

1. 2 cups grated cucumber (from about 1 medium 10-ounce cucumber, no need to peel or seed the cucumber first, grate on the large holes of your box grater)

I didn't take a whole lot of pictures for the Tzatziki Sauce. We love this sauce for a lot of things at home! Here are the cucumbers I chopped up for it: 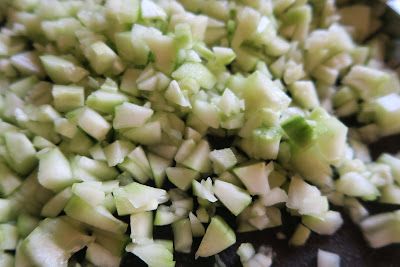 At that point I took at nap! Mica claimed he didn't want any supervision with the Gyros. We did buy the meat already prepared, so it was easier for him.

It could have have been filled a little more with lamb meat, but he carefully planned it out, to have just enough for lunches the next day. Really we should have bought more. Ha! 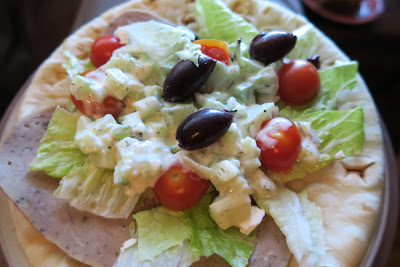 I thought he did an excellent job making this by himself.

We had the potatoes and carrots, for a side. Then had the Baklava for dessert. 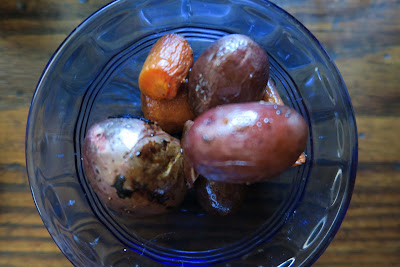 If you were to make a special dinner, what would you prepare?

Disclaimer: This was not a paid post, nor a review of a product. All words, and opinions are my own.
Posted by An Apel a Day at 3:30 PM

Yum! Looks great - tho anything with olives usually is!

Nummers! Wow~nummers is here and now. I have got to copy these recipes I personally love the very last one & I'm going to try that first. Thanks much! I'm so hungry now! mmmmmmmmmmmmmmm Looks delicious! Thanks for sharing!

Looks delicious I want some I will pop round later heheh!

Looks like a great meal to me. Kids usually love to cook!

He did a great job on his meal. We've never done gyros here, but Jason loves them, so maybe we'll try it soon. The baklava looks super yum!

Clear instructions and look so yum..

That's awesome that they made their own things. I love me some good baklava!