Like many places, Nebraska has been hit hard with snow. I guess we're making up for the lack of snow late fall, early winter. The ground needed it, for our upcoming growing season.

I just hope that where I teach in Fremont, Nebraska it doesn't flood when it all melts.  They had problems a few years back with flooding.

I happened to notice that Travis didn't have a good broom type scraper. He said he had one, but it broke.

It was great to surprise Travis with the AstroAI Ice Scraper and Extendable Snow Brush Remover:

You can get it here: https://www.amazon.com/dp/B08N18NBCP?th=1. It came just in time, for 0 degree weather + another snow dump. Are you getting snow where you live? 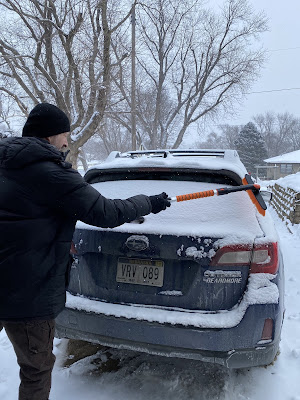 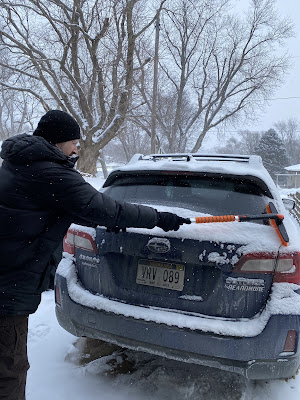 Colors:
I picked orange, but it comes in teal blue as well. I wouldn't mind having both of them; one for each vehicle.
Pieces and Parts:
It comes with a bag to store all the pieces in. I'm not sure we'll use the bag. It snows quite often in Nebraska. I'd rather have the scraper, and brush ready to go. 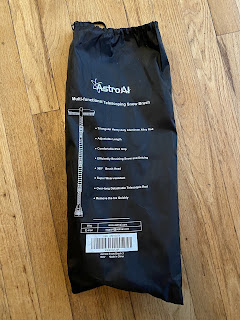 You can see how long it extends in the next picture. It is 62.4", when the average snow scraper reaches 39.7 6". The length helps for tall vehicles like the Subaru Outback that we have. It breaks apart if you do want to store it. We plan on using the brush more because we have a metal scraper that works really well already. 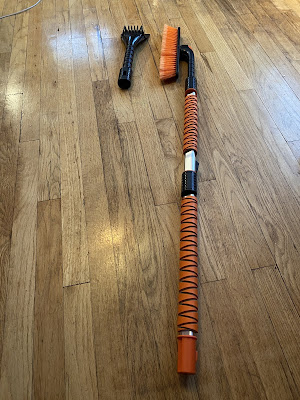 On Amazon it shows that the scraper can go on one end, and the brush on the other. I'm still trying to figure that out. It looks to me like the orange bottom is the end, and nothing snaps on there.
The brush has a swivel button. This works wonders if you are trying to reach a certain part on your car, or truck. The plain orange button rotates the brush's direction. 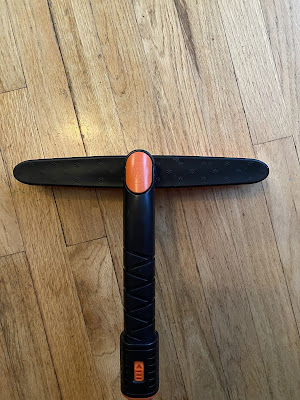 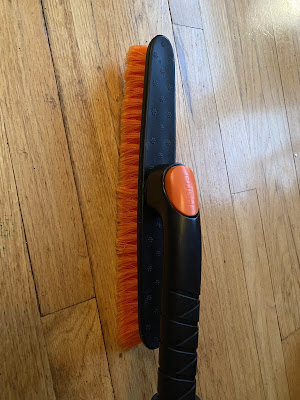 The orange button with an arrow snaps the brush off, and allows you to put on the scrapper. The first time I hit this button it was super easy. The second time I hit the button, I couldn't get it to pop off. I imagine in the deep winter, when I'm freezing, I just won't want to mess with getting the brush off, and putting a scrapper on. The idea is great! This one device that does everything! Realistically I think we'll only use this for the brush. In Nebraska I've found that a metal scrapper has to be used for our harsh winters. 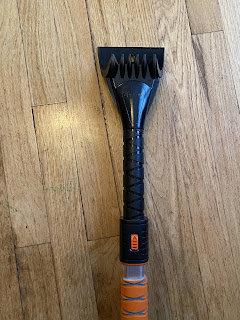 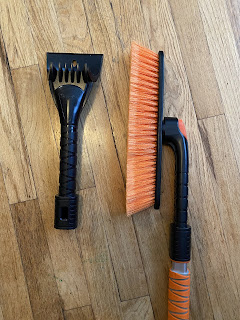 Have you had to scrape your car, or truck a lot this winter?
Disclaimer: I got this product for a discounted price in exchange for an honest review.
Posted by An Apel a Day at 5:33 PM

That's a really nice scraper. I love that it's double the length of a standard scraper, especially since I have an SUV and it gets hard to reach all the top areas without opening my car door to stand on the step pad to get it all off. That lets all the heat out too, then. I bet Travis doesn't mind brushing the snow off the vehicles with this handy brush!