1. Isaak’s been a swear word police. He keeps saying, “Language!” When I saw this t-toilet, I so wanted to get it. 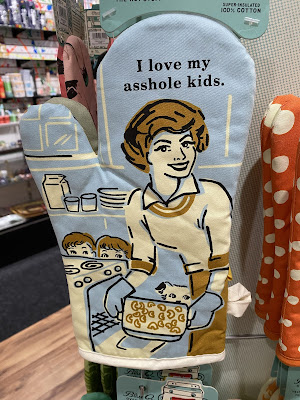 2. The kid’s school district sent an email saying they want all remote kids in class the last few weeks. Mica went back on Friday.

One girl hasn’t seen Mica for a year. She said, “Mica what happened to your voice?” Yep he now sounds like his Dad.

3. Isaak says he never wants an Adam’s apple, nor does he want his voice to drop like Mica’s did. Growing up is hard to do!

4. I’m almost done with my Midland class. It was so easy. I’m not the biggest fan of Canvas though. It’s not super picture friendly. Considering it’s a visual class, it was a pain to not get pictures into the tests. It kept erroring out.

Were you really judgy about anything when you were a teen? I remember being annoyed that my parents only listened to John Denver and Neil Diamond.

5. Mica’s decided to be super judgmental when it comes to TV and movies.

haha Love that pot holder. I'd totally use it in my kitchen.

He’d yell at me all day. I’ve got a horrible potty mouth lately lol. I love that pot holder!
Many of the kids are going back. Our state just dropped the mask mandate so I don’t feel comfortable sending Allison back the rest of this year. They are out in 1 month but she still needs to get vaccinated. As soon as she does, I won’t mind her being around her peers so much then. But for now, it’s home school until this fall.

My mom LOVED Neil Diamond. I think he only had one song I liked... Forever in Blue Jeans, Babe. The rest annoyed me. My son is judgmental about shoes. I went into the Skechers store and he said, "Mom, you're going to ruin the family name!" He was joking and we laughed, but he wouldn't wear that brand. He's super picky about his shoes. It started with basketball (the 'regular' shoes would fall apart fast on the court and the expensive ones wouldn't...but now he's developed a taste for them!).

Yes, growing up can be a challenge. Did they have to go back to in-person in order to take state tests?