Both boys are in swimming lessons. They've moved up twice. This last time we were told that they should stay where they are at. I agree.

They seem to listen very well during swimming lessons.

Isaak at age 4 is pretty good at swimming. We had a little problem 2 weeks ago. I went to go help Mica with a shower when Isaak was in swimming lessons. I guess Isaak was all concerned about where I was. His coach told me after lessons that Isaak would do better if I was out of sight, out of mind. I disappeared behind the glass window during the next session. I let Isaak know where I was going to be. Tonight I was talking to his coach; she was the lifeguard for the evening. I found out that she thought Isaak was 6 years old! I told her, "Nope he's only 4. His birthday is in May." She was in awww over how he did at 4 years old. The only problem is, is after he passes his next lessons Isaak can't move up to the next until he's 6 years old! I didn't know that! I don't know what I'll do. I want him to excel and be happy with his lessons; not bored! 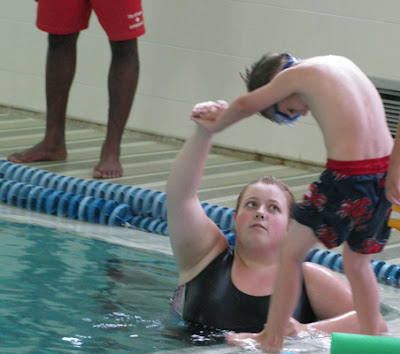 Mica likes both swimming and Jujutsu. He has taken more interest in Jujutsu when he got his uniform last week. I didn't want to jump the gun and buy him one if he wasn't interested. He seems to like it. He's not super good at it. I have to say the uniform made a difference. Before he acted silly; now he's much more serious about it. It's a room full of boys his age kicking, punching and wrestling. I can understand why he's silly sometimes. We're still iffy on Jujutsu. We may in the future decide on Kung Fu. According to Grandpa Spiehs Kung Fu is better for Mica's body build. He's going to be tall. Jujutsu is better for shorter fellas. We'll see. I thought since we belong to the Y, Mica should give it a try to see if it's something he likes. 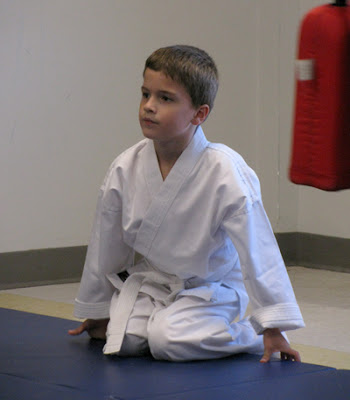 Your boys are awesome, A!

Way to go, Ishak and Mica!

Your boys can swim better than I can. When I was young, no one taught us to swim. We just jumped in the water and hoped for the best.

Pierce took ninjutsu all winter. He wasn't crazy about it, but I made him stick it out. I never bought the uniform, since he didn't like it that much.

Wow your boys are very talented. It is nice to see young men/boys out enjoying their talents. Good Mom. B

My goodness, such accomplished kids for their ages! great stuff!
Thanks for your comments at my place.

They must be having a GREAT summer between swimming and I know you do Art with them. Fun time!

he looks so serious in his uniform!
i wish we had a Y near us...

Isn't it fun (and tiring!) helping the children learn and find what they love? My children's father is teaching them to swim and they are doing so well! I can only teach them floating, swimming under water, holding breath and stuff like that. Not a swimmer at all. I'm amazed at how much better my children have been swimming with just two to three weeks of working with their dad this summer. I started it and when he gets them they work hard on treading water and swimming distance, form, etc. So cool.

I love the pictures and I'm so proud of both of your boys. LOL... It's funny how some of my blog families just touch my heart. :-)