What Happened on Thursday

On Wednesday many of us (my cousins, siblings and I) couldn't go to my Grandma's wake. There was a Fall Festival going on in the area. No hotel rooms were there. We all showed up on Thursday for the funeral. It was great to see everyone. I loved that so many people were there for my Grandma! The church was pretty full. My grandparents haven't live in that small town for 4 years.

It was good to hear stories about how wonderful she was.

Below: Me and my Grandparents when I was in college many moons ago. I made them that paper quilt. It was all made out of homemade paper.

Mica had a mountain of questions. In the church I gave Mica and Isaak little sketchbooks I get for free from Blick Art Supplies. Mica always asks, "What should I draw?" I told him, "Why don't you draw Great Grandma Kent." I handed him the bulletin that had her picture on it. He happily drew a picture of her and added Domino's to the front (which she liked to play) and an image of himself on the side with a bubble coming out of his mouth saying, "You are my friend." He later ripped it out to give it to Great Grandpa Kent. Mica's a charmer, but he also is very blunt. The day ended with him saying, "This is all we came here for?" I think with all that driving, he thought we were going to stay in a hotel.

I have to say that the boys were very good during the day!

While Thursday was in the works we, Aunt Terra and Uncle Tyson were waiting for a VERY IMPORTANT phone call! During a routine ultrasound they found a few Wilm's Tumors on Emerson's kidneys. If just one kidney has a tumor they do surgery. Both kidneys have tumors on them. Chemo is the only way to treat them. Only one pediatrician oncologist would see him. Because he has Trisomy 18, the others wouldn't see him at all.


Little Emerson in his play area. 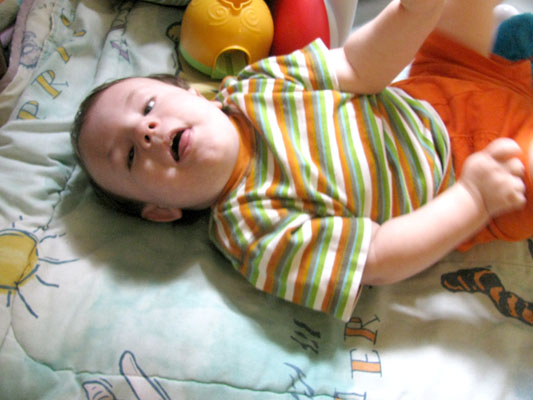 In order for Emerson to be treated their family had to go to an Ethics meeting at the hospital on Wednesday night. It's sort of like going before a jury. They had to present what Emerson can do, had doctors that have fought for him on their side. Little Emerson now has a resume. Assisted Emerson can sit, walk along furniture, and rock back and forth for crawling. Alone he can roll over, all over. Then the jury of doctors had to decide what they were going to do. Only it took them until Thursday to decide. Talk about leaving them/us hanging!

Well they got the call during the funeral (Terra's phone was on vibrate) that Emerson will get the treatment.

He'll get a biopsy, a scan to see if anything has spread and chemo all at the end of this month.

He'll be getting his chemo during flu and cold season. :( He gets sick a lot anyhow. :(

We're all rooting for the little man!

We're talking about how to help with our other nephews. I'm seeing in the future some slumber parties at my house. If you have any kid friendly crafts for two 4 year olds and two 7 year olds, send them my way. We collected pine cones over the weekend. I figured that we can do something with them. I tried looking for acorns, but it wasn't happening. Two parks didn't have any. Life in the Lost World reminded me about Newspaper Hats. We'll do that to!

I wish I could help with taking the boys too and from school. We have issues with that even with our own children. I'm hoping some people are able to help! For now I'm not signing my kids up for one more sporting event for awhile. Family Gym and open swim night will have to do this winter. Mica will still do jujitsu. Swimming lessons and tumbling will pan out until the end of their session, but after that our kids are getting a break from that stuff.
Posted by An Apel a Day at 9:39 AM

I hope everything works out for Emerson. The poor little guy has been through a lot for how young he is.

Sleepovers are going to be so much fun for the boys and so much more work for you.

Mabye you might want to make snow globes out of baby food jars. I don't think they take a lot of materials.... I made them when my Daughter was young but can't remembe how I did it.

I wish you lots of luck with entertaining the boys.

I wish I had advice for kid crafts... Do you follow JDaniel4s mom? She has so many things she does with him... Love it...
(I too have been looking for acorns since you posted that... none to be found)
I hope all keeps going well...
Hugs to you...

I am praying hard for Emerson. Poor guy, he's been through so much.

Have a blessed weekend, A!