How a Good Day Can Turn Cold Day

Saturday was in the 70's and Sunday was in the 30's temperature wise. I'm not looking forward to winter. There's part of a reason why I went to grad school in the south.

The boys were great Saturday morning. We ran an errand. They were good there. They came back home and helped me bake and clean. They were wonderful little souls.

So wonderful that I let them watch a movie. Their choice was Home Alone. I didn't think at all about Isaak's separation anxiety. Yep that was a Mommy fail! They still liked the movie.

Mica got to call a friend to come over to play. There's a little story to this. The boy that plays with Mica all the time isn't as accepting as Mica is. Another little boy was trying to play with them and Mica said, "Sure you can play with us." The other boy said, "No you can't play with us." Then Mica grilled the unaccepting boy a little about how other kids can play with them. I'm proud of Mica for that. I told him that if his friend was like that again how he should just play with the kid that wants to join in and his friend can choose to be accepting or not. The kid Mica wanted to come over was the one that was left out. I just want to hug kids that are left out. It's such a tough world we live in today. My nephew that is 4 said, Why are those guys bullies." What was he talking about? Politician's on TV. That's what our kids see. That's what we're supposed to have them look up to. Mica called the kid and just got an answering machine, which lead to heartbreak. I left a message. Mica kept saying, "When is he going to call back?" and "Why won't he call me?" I kept saying, "I don't know honey."

Later on we found out that our land line phone was in use for 3 hours. It was off the hook and I couldn't find the phone. Mica was carrying it around while I was vacuuming, so he wouldn't miss a call back from his friend. The FIND button on the phone wouldn't work because it was in use. Mica searched high and low for the missing in use phone. He wanted my help. I was making dinner by that time. When he searches for things, he pretty much walks in circles expecting the missing object to hit him in the face. When Daddy got home he found the phone right away. Mica tried calling his buddy one more time and got another answering machine.

Isaak was laid down at 2:30. I know the boy is weaning from naps. He was a grouch. When he's a grouch he is a pain to Mica. He was just throwing things, trying to shoot Mica's stuff with Mica's Nerf Gun. He went from a good helper and sweet kid to a punk and a 1/2. Down he went. Things were quiet. I thought he fell asleep. :)

Then I heard noise.

Close ups of my paper birds and paper puppy I made: 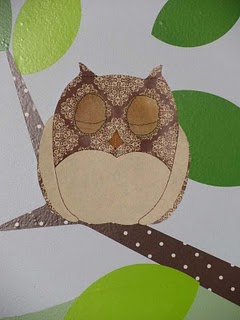 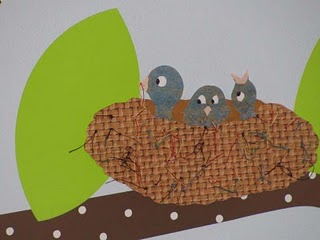 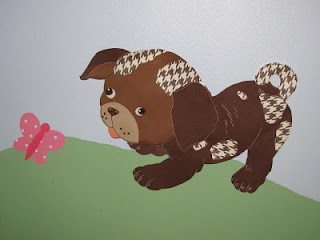 Cute right? Well it doesn't look like this anymore! :(  Isaak's long since peeled the middle part of the tree up. Yesterday he tore the owl off his wall and I found it on the ground. The nest was about to get tore up and I caught him red handed. I yelled loudly, held his face in my hands and said sternly, "You don't do that!" and off to timeout he went. He doesn't get the owl or the tree back. If he doesn't want a cute room that's his problem.


Later on I found by the puppy on the wall "Isaak" with all the letters backwards in pencil. He knows how to write his name the correct way. He was just experimenting. Then he colored in the open part  puppies tail on the wall; again with pencil.

Do you or have you ever gotten so annoyed with your kids that you don't know what to do? He didn't want to nap, so he ransacked his room instead. I was so mad! I wish this was a scenario like when Mica slammed his door; where I could remove the door for awhile. Not so easy. His decor is about to fully come down though. I'm sick of him peeling at his tree and destroying his cute room. Part of me wishes I would have painted a mural on his wall. Then he would have peeled the paint more than likely. I don't know if I wish for him to have anything, "cute" in his room when he destroyed all that I put into it. Maybe it was more for me than him. I'm about to rip it all down and he gets just bare walls. I don't think that would punish him enough. He'd probably like having nothing on his walls. Maybe I'll take 1/2 his toys away. I need ideas here. A punishment that would make him wish he didn't do that.

One of my friends on FB just posted that her son's been peeling paint off their wall. I remember babysitting a kid that ransacked her whole house in the middle of the night. I suppose I should be thankful it wasn't that bad. It is the first time anyone has colored on our walls. It was in pencil. I won the tree, so I didn't pay for it. I'm trying to look at all the positives that are in the situation. I'm still ticked off.
Posted by An Apel a Day at 1:20 PM

Oh oh.. I know how it feels! We rent a house this year and there is a clause in the contract that we have to leave the house as it was the first time we came..meaning clean walls...and this is only the third month there are 'artworks' everywhere..even outside!
Sometimes when I really don't know what to do I will just blow a hard and heavy breath or pretend to sleep..or ignore it..

Btw I am having a brand new hop to increase our Facebook page visibility. Would be very happy if you could join :) http://cutecoconut.com/2012/11/the-way-to-increase-your-facebook-page-post-visibility/

Kids minds work in such a funny way sometimes! One day my nephew took a stick and whacked all my moms flowers down. He wasn't be malicious, just playing dragon slayer...lol

My eight year old gets like that - if he gets in major trouble and sent to his room, he thinks he is getting back at me by destroying it. He's yet to learn that he's going to end up in even more trouble AND cleaning the entire mess when he's done.

We are in an apartment... so we just have things hung on the walls.. dont know what to tell you. Taking toys might be the only option.

Oh my... all your hard work. I don't have any words of wisdom except maybe ground him. Not sure if that would even work.