Today was eventful. We had Grandma Spiehs' family Christmas. It was postponed to today because on Christmas the hosts got the tummy flu. Round two of me making food.

Isaak said to me while I was making the food, "Mom you are so old, but you really look young. You probably don't want to look old because then you might die."  Kids say the craziest things!

I stepped out of the kitchen to go do something and heard a laugh from Mica and a cry from Isaak. This is what I saw: 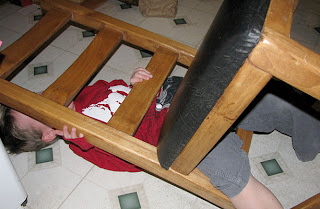 Isaak thought it would be fun to climb our kitchen chair like it was a ladder. "Sorry son if you're going to do something so silly, I won't rescue you until I grab the camera." For the record he's alright.

Once we got to our destination I thought we came on the wrong day. No one was there hardly. Usually I'm running on the late side when a lot of food is involved. I'm not the best with my timing in the kitchen.

Isaak was well entertained with these dogs: 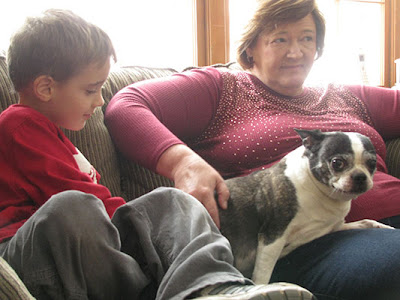 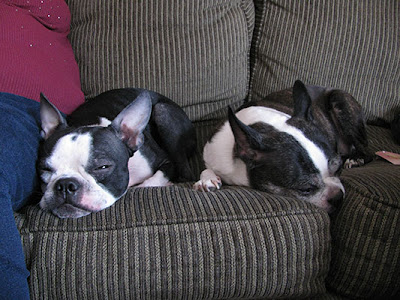 We ate, the kids played in the snow with their cousins and later on the kids got a three presents each from a big huge box. Great Aunt Becky asked a Christmas question and if the kid got it right they got to pull a present out of the big box.

When it was Isaak's turn he would not answer any of the questions. He all the sudden became REALLY shy! Somehow he got presents anyhow. 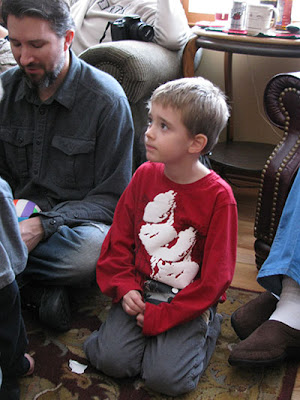 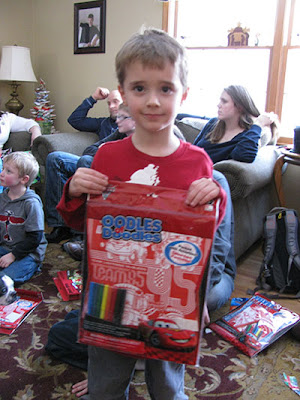 Mica of course was super outgoing. 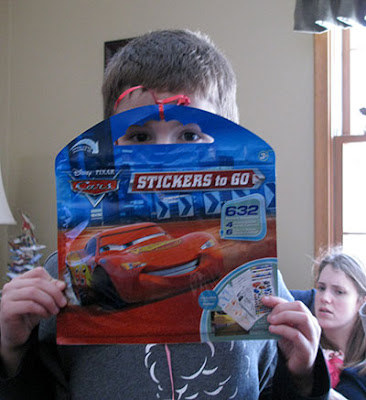 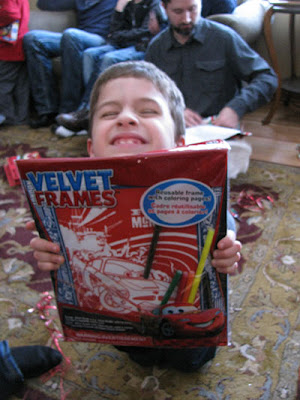 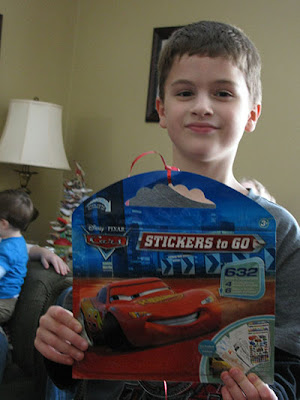 Cousin Emerson had fun during this time! 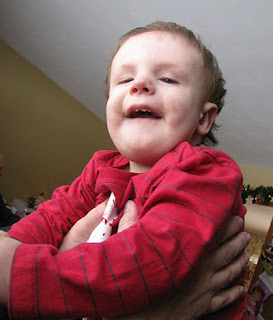 I caught Aunt Angela in a really funny moment! I thought she might kill me if I posted this photo to her facebook wall. If someone posted something like this photo of me, I'd laugh my ass off! 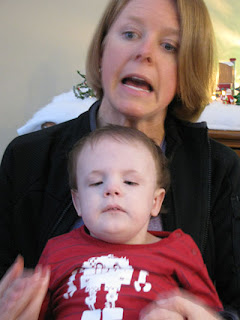 The kids went to play outside again and then I heard Aunt Terra say, "Is that Mica and Evan in that tree? OMG they are as high as the telephone pole!" Sure enough they were! 20 something feet up in the air. Thank goodness they got down! I wish I got a picture of that one.

The boys came in and went downstairs to watch a movie. All the sudden my cousin's kid was crying.

This is what we heard, "Isaak threw a chair at Colton!"

We envisioned this type of chair being tossed in the air and hitting my cousin's kid in the head: 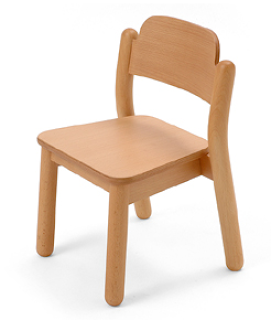 Then we found out my cousin's kid threw a chair at Isaak. Isaak said, "That didn't hurt!" Colton said, "Throw one at me!" Isaak threw one back at his head.

Then we were envisioning a lot more action. A flat out brawl; little kid style.

Then we found out they were throwing this type of chair back and forth at each other: 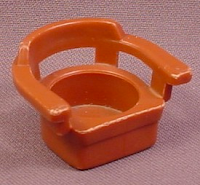 On our way home I asked the boy's if they had a good time? Mica told me that he wishes he had a sister just like Kensley; my cousin's other child. I told Mica, "That's wonderful you like Kensley. You are not going to have a sister though." Yep we're done having kiddos.

Hahahahaha - that is so awesome that you made him stay under the chair until you took a picture. That is exactly what I would have done!!

Happy New Year to you and yours.... Oh, I wanted to tell you. My Hubs seen the Christmas Card you sent with the baby legs I won. He laughed at it and said. She must be a real character!! He loved the idea of Silent Night.

The chair throwing cracks me up!

omg, that tiny chair! But gee, did Isaac have a bad chair day!

You know you are a blogger when you post up silly photos of not only your kids, but other family members too! I love that she wouldn't like it on her Facebook page, but you posted it here for the world to see hahaha! Love your sense of humor!

It certainly was a day full of chairs, wasn't it!

Hysterical that it was little chairs they were throwing. :) I came over to wish you a happy new year.

Britt has done the same chair stunt. Hehe! Ash too, come to think of it. Such a fun (and funny) filled day for you guys. Emerson is getting so big!

LOL! Sounds you have had a great and fun family gathering huh! :D

Kids really do say they craziest things! I love the pictures of Emerson. He is getting so big!

lol, love that you made him stay till you took a picture...
so happy to see emerson.. he is getting so big ;)