I've heard from Mica that he wanted Lego Ninjago Jay's Storm Fighter for Christmas since October. It was that along with a game system, a full sized drum set, a Lego Marvel Super Heroes the Avengers Quinjet Aerial Battle and some kind of Ninjago book. This Ninjago Lego stuff is all over Mica's mind. He knows the character's names and what kind of powers they each have. He and his school friends play it at recess.

Santa can't afford all that stuff. Nor does he want a full sized drum set to be in our house. Mica thinks Santa can magically make anything appear. He also thought that since he only wanted a few things Santa could for sure get them all. Daddy got after Mica because he heard him telling one of his friends that he is getting all those things for Christmas. I kept telling him that Santa knows what Mom and Dad want him to have.

I made an appoint to have the boys donate a few unwrapped toys to the Salvation Army box and they both gave money to the bell ringer outside the store we were at the weekend before Christmas. They seemed happy to do both of those things. I was expecting to hear, "I wanted to keep that toy." But I heard none of that. The only thing I heard was fighting over who was going to put the toys in the box. They each got a turn.

I was expecting to hear on Christmas Eve or on Christmas Day from Mica, "I didn't ask for that!" But he didn't. He was happy with all his things.

Even though he seemed greedy before unwrapping presents; he turned around.

Here Mica is with his Lego Ninjago Jay's Storm Fighter: 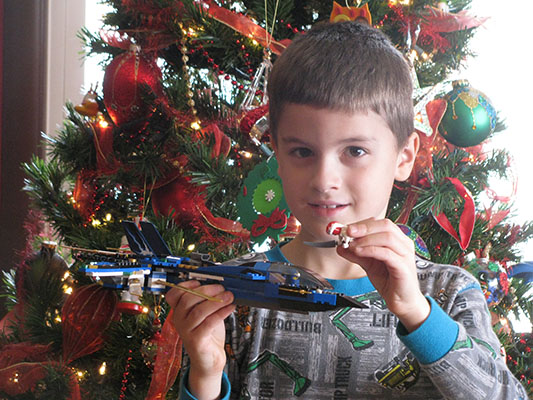 My Mother used to tell us we could ask for 1 big thing. It worked for us, but not sure it would work today. The kids now have a lot more than we did.

He must have been excited to get that under the tree!

My eight year old plays the drums and has been taking lessons for over two year - and even I will not get a drum set for him. Not that I don't think he's serious, but it's wicked expensive and I'm afraid that as soon as I buy one, he will want to stop playing.

Pierce also got 2 things from his Santa list, as Santa was on a very tight budget this year. It's good for kids not to have every little thing they want.

Hello from France
I am very happy to welcome you!
Your blog has been accepted in America North United States of America N°355 a minute!
We ask you to follow the blog "Directory"
Following our blog will gives you twice as many possibilities of visits to your blog!
Thank you for your understanding.
On the right side, in the "green list", you will find all the countries and if you click them, you will find the names of blogs from that Country.
Invite your friends to join us in the "directory"!
The creation of this new blog "directory" allows a rapprochement between different countries, a knowledge of different cultures and a sharing of different traditions, passions, fashion, paintings, crafts, cooking,
photography and poetry. So you will be able to find in different countries other people with passions similar to your ones.
We are fortunate to be on the Blogspot platform that offers the opportunity to speak to the world.
The more people will join, the more opportunities everyone will have. And yes, I confess, I need people to know this blog!
You are in some way the Ambassador of this blog in your Country.
This is not a personal blog, I created it for all to enjoy.
SO, you also have to make it known to your contacts and friends in your blog domain: the success of this blog depends on all Participants.
So, during your next comments with your friends, ask them to come in the 'Directory' by writing in your comments:
*** I am in the directory come join me! ***
You want this directory to become more important? Help me to make it grow up!
Your blog is in the list America North United States of America and I hope this list will grow very quickly
Regards
Chris
We ask that you follow our blog and place a badge of your choice on your blog, in order to introduce the "directory" to your friends.
http://nsm05.casimages.com/img/2012/07/12/12071211040212502810092867.gif
http://nsm05.casimages.com/img/2012/03/19/120319072128505749603643.gif
http://nsm05.casimages.com/img/2012/03/24/1203240217091250289621842.png
http://nsm05.casimages.com/img/2012/03/28/120328020518505749640557.gif
http://nsm05.casimages.com/img/2012/03/26/1203260602581250289633006.gif

If you want me to know the blog of your friends, send me their urls which allows a special badge in the list of your country
I see that you know many people in your country, you can try to get them in the directory?
Please! Actively support the "Directory" by making known to your friends! Thank you! "Unity is strength"
Not need an invitation to join the Directory. Any person who makes the request is entered
WE ASK YOU TO FOLLOW OUR BLOG "DIRECTORY"
New on the site
Ranking of Countries
Invite your friends know made ??
the website to raise your ranking in the Country

He seems very happy with his new Legos! And yes, Santa surely does know what the kids will appreciate under the tree.

We took our girls shopping for Toys for Tots. I told them to pick out something they would like to receive for a gift, then got worried they would complain that they wanted to keep it too. Thankfully that didn't happen, then we were able to stop and think back to the gifts we donated and how much joy we brought to a few little girls that morning.