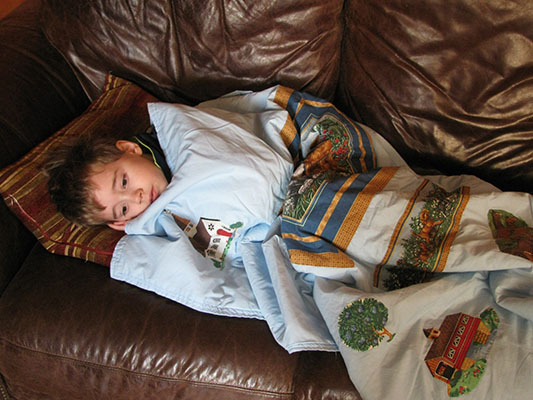 He had a rough night. His tummy ached! He's cuddled up in a blanket my Grandma made, his Great Grandma Kent. He watched Elmo and then Curious George. Mica had to put up with Elmo before school. At first Mica was like, "I don't want to watch this baby show!" Then he was laughing at everything. It was Elmo's Potty Time, which is pretty funny to watch as you age.

On a good note: Isaak's hives were practically gone this morning. *See previous post about that one.

I'm assuming what Isaak has is a viral infection of some kind vs. being allergic to some food. He didn't eat anything out of the norm. He's never had issues with food, except Ranch dressing. When that hits his face, he gets a rash on his skin. I've never had problems with Newman's Own, so I try and get that brand.

I put in a call to the doctor's office. They happened to have a staff meeting this morning, and opened up a 1/2 hour later. No call back yet. Sometimes it takes awhile. I'm sure they are swamped even more so, since they opened up late.

Things I wish I had today: Blank shirts. I'm so missing the Hobby Lobby that closed by me! I also wanted to make St. Patty's Cupcakes. I have no cake mix. It looks like I may be trying to make cake from scratch. These are just things to fill my day. Selfish wants for a day off. There's no way I'm leaving with sicky.
Posted by An Apel a Day at 9:48 AM

Email ThisBlogThis!Share to TwitterShare to FacebookShare to Pinterest
Labels: Sick

Aww, I hope the doctor gets back w/you quickly. I'm sorry your little guy is sick. :(

Yep.. he even looks like he don't feel so great today.

i would think you would have plenty of blank shirts just to use your talents!!!!

There is something definitely going around! A lot of the kids in my daughter's schools have been out these past few weeks.

The poor thing. I hate when the kids are sick and there is nothing I can do about it.

Poor guy. Hope he feels better real soon! GG got better and has been for about four or so days but then today she woke up saying her throat hurt some. Bound to happen more often now that we go to the Y on a regular basis.