Things to Take to Grandma and Grandpa's House

There are a some things I was so glad I took to Grandma and Grandpa's house! They were:

Isaak's not super into reading right now. He likes to create more. Mica on the other hand loves to read. Before our trip he was talking about Flat Stanley. I was familiar to the series. It's about a kid that is just like it says, flat. Aunt Terra told me about how Cousin Evan's school had them mail out a Flat Stanley to others far away. They took pictures of Flat Stanley and mailed him back in a self address envelope. Most of our family and friends live by us. On FB Terra posted about needing someone to take pictures of Flat Stanley. More than one family volunteered to take him in. She has pictures of Evan's Flat Stanley all over the place now. It's pretty cool! I got Mica the first book and a ninja book of Flat Stanley. Here Aunt Laura is reading it to Mica and Cousin Payton. 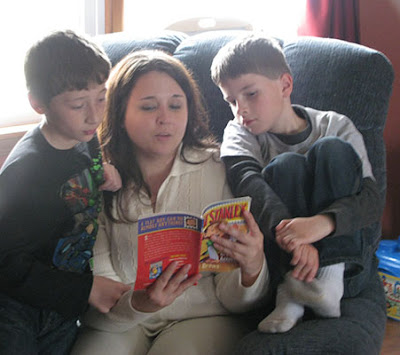 Daddy thought I was nuts when I wanted to take an easel. It was one of Isaak's favorite things. Then Cousin Payton drew on it as well. I reviewed it awhile back. Then I set it in Isaak's closet to get out if we went out of town. It's so great because it's small, it has a chalkboard and a dry eraser board. 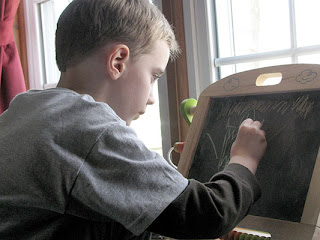 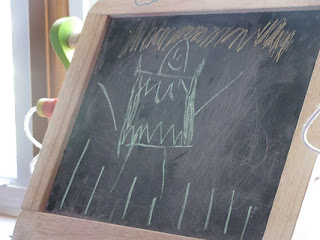 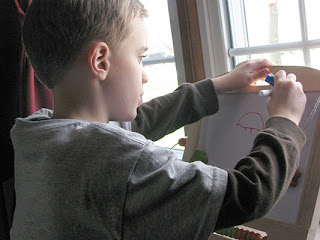 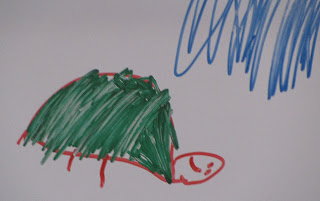 Maybe this was or wasn't a good idea. We spent too much time playing it and it we fought over it. I say [we] because Mica insisted that I wasn't any good and couldn't play. Hello! I've never played their little game system, but I could play back in the day. I proved to him I could in fact kick some booty. It still was fun. Daddy's phone was just as bad because he downloaded a game on it. 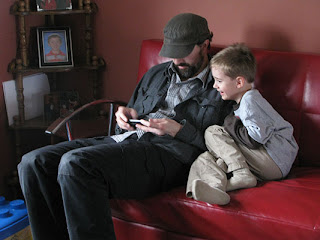 Legos with my kids are fun just about anytime. We brought a bin and they played with them making all sorts of things.

You're so smart to think and plan ahead like that. You definitely brought stuff that could be used for a good long time too!

We have a HUGE easel Zoe just loves. We'll have to get a smaller one for when we travel! The kids DS's go everywhere with them to keep them occupied.

lol DS and Lego's are always on the top of my list :).

All great items to take to grandmas! I agree with Liz. They all seem like they would keep the kids occupied for quite a long time too!

Looks like they are all set for Grandma and Grandpas house. The chalk board was a great idea

All terrific ideas for entertainment. I always packed things to keep busy when visiting people and car rides!
twinkle at optonline dot net

broxton is getting into the lego stage... he has duplo... and just a couple lego... now he wants more lego :)

I am really liking that easel! Its great for traveling, whether in car, train or plane - especially since you don't have to use batteries or shut it off before a flight begins. Where did you purchase it? I can see my tween (and me!) using that.

For my kids, the DS is a must. Those saved us during our vacation and the long plane rides. Plus, they are awesome when we go on road trips to New Hampshire.