Isaak had his first friend birthday party this last Saturday. There were 5 boys and 2 girls all together. Two parents stayed. One acted like he was going to, but didn't.

I had games planned, but I read on the internet that between the ages of 5-7 they just want to play. I decided to play it by ear. The games I thought about were easy, common and I had the stuff. Like drop the clothes pin in a jar, walk across the room with a spoon and a bean to see who drops it first.

No games were played. They played, played and played some more.

I was huge about getting a big box construction built for his party. Daddy made a rocket out of boxes for Mica's first party, and it was such a hit! It was hard getting them, but we did. Daddy made a box apartment for Isaak's party. It to was a hit! 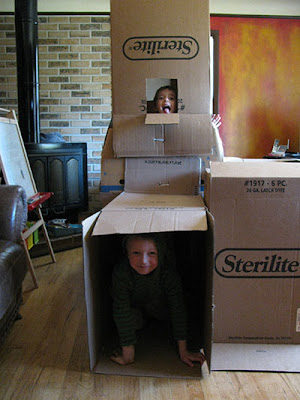 Mica was a downer that day. He was sad because all the kids have birthdays before him. He went to a birthday party for his cousin Evan, while Isaak's was going on. I kept trying to tell him that his birthday is first, not last. He didn't buy into that. Three people in our family have had birthdays in the last few months. Mica's birthday is when school starts.

I was so glad that Mica went away for Evan's party. It's not that I don't like my son, it's just that he's into wanting a lot of attention. Plus he wasn't too great about helping with the prep work before Isaak's party. I couldn't really blame him. But I was upset that he kept saying his room was clean, but it wasn't. 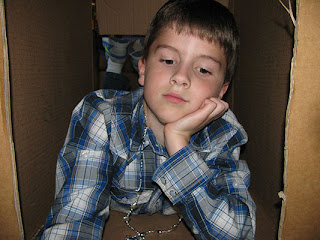 Mica had fun at Evan's party. He only knew Evan, so I was worried about that. Evan had people donate canned goods instead of bring presents. One of the kids said, "I'm hungry! When are we going to eat all the canned goods we brought?" LOL

Back to Isaak's party. I didn't take a lot of pictures due to parents not wanting their kids pictures splashed on the internet. Plus I was busy!

Here's what they did:
Here's one photo I got: 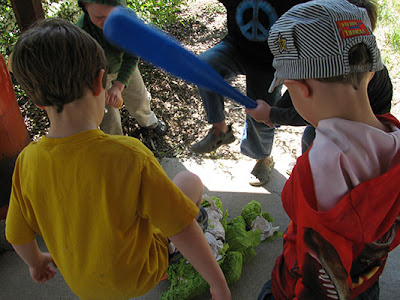 We attempted to spin the boys and have them bat at the piñata, but it wouldn't break. They beat the thing silly on the ground.

I did have giveaway bags. I never know if I should do this. I think in my mind, Here's a present for the present you gave me. I entertained you for a few hours. Then I have to write you a thank you note for your gift. Even though I gave you a thank you bag. That's all so odd for me. It is what it is.

I found the cutest things though. Each were $1. Wooly Willy was at Michaels Craft Store and the Greenhouses were in Target's cheep section. Then the kids got a handful of piñata candy: 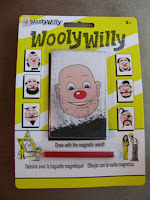 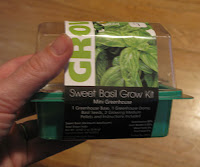 Mica got home and wanted to claim ownership of Isaak's presents. Usually I don't let that happen, but Isaak wanted him to play with him. It worked out.

I think goodie bags are expected....lol. I know my kids have gone to parties when they weren't given out and I actually kind of got offended because I always take the time to make nice ones - it's kind of like a thank you for bringing my kid a present. I know people have mixed feelings about them, but I think kids expect to walk away with something.

That cardboard box apartment is AWESOME by the way. How cool!

I didn't know they still had the Wooly Willie. I think that was around when I was a kid.

What a great party Alissa!!

Genius saving that box for the party! It's amazing that you can have all kinds of expensive toys, but they always go for the box that was free!

I always do goody bags too. Nothing over the top or expensive. Just a few handfuls of candy or trinkets.

Fun party! I think goodie bags are expected too which sometimes as a parent they seem a waste but the kiddos enjoy them.

I remember Willy! Crazy how such a simple toy entertained me.

That is the best cardboard apt EVER!

That looks alarmingly close to what some of the "real" apartments I've seen in NY look like. Space-wise anyway.

I love your goodie bag items. Looks like a fun time!