Last week Mica and Isaak both went to drama camp.

We knew Mica would be just fine. Isaak on the other hand, we were certain that he would be nervous being dropped off some place new.

One of my friends' twins were happened to be in Isaak's class. That was fun to hear. Except he didn't remember them at all. We must get together more!

I wasn't sure what they would do in drama camp.

Mica was all excited after the first day. He was given a tour of the facility where they have actual musicals and plays. He kept talking about all the costumes. For a boy Mica still really likes to dress up. He has a dress-up bin; that Isaak and him share. It's not full of girly things. They have a super hero capes, a magician robe, doctor's scrubs, a safari outfit and gear, viking hats, and Halloween costumes they still wear.

They re-enacted parts of the Lion King. Mica was an elephant. He could do whatever he wanted to do to pretend to be an elephant.

The learned the song Morning Report. He also learned a few other songs. One is a song from The Wizard of Oz. Mica was super excited that he's going to be a tin man and a tornado in that song.

He made a candle and they acted out Jack Be Nimble and other nursery rhymes.

I kept messing with him and said,

"Oh ya this is how it goes,
Jack be nimble
Jack be quick
Jack jumped over the candle stick
and broke his head."

I said, "He didn't? I must have gotten that wrong."

I should have sent Isaak in his Little Jack Horner outfit he wore at preschool. That would have worked. 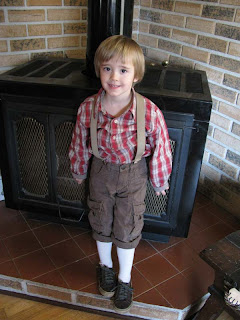 Anyhow drama camp was a success. They really liked it. I'm glad we signed them up for it.

I'll follow up with pictures and/or video. They did a few productions for us last Friday.
Posted by An Apel a Day at 9:16 AM

I remember always wanting to do something like this when I was little! This is so awesome and I bet it was a great experience for them.

My oldest was in drama in high school and loved it. This is a fun camp to put the boys in!

Never heard of Drama Camp but sounds like the kids enjoyed it.

i think camp would be so fun.. hopefully broxton will do one when he is older ;)

How fun! I certainly don't think dress up should just be limited to little girls! I love that they have a dress up trunk. It's fun to pretend! I'm glad drama camp was a success!

Pictures would be great, but videos would be awesome!! Glad they both had fun. My little guy would never let me drop him off - he's got major attachment issues, but maybe someday.