Mica wanted a Captain Underpants party. I said, "No." to the friend party, but "Ok." to the family one.

He thought he was going to wear underwear and a red cape for his invites. I just made a vector of his face, redrew the rest of Captain Underpants and changed the color of the background. Then I'll do a banner of underpants at the party. We'll celebrate Daddy's party as well. He has to be ok with whatever theme Mica chooses. Just like I have to be ok with the theme of Emerson's birthday; for my birthday.

I told Mica that he, Isaak and his cousin's can wear underwear on the outside of their shorts, but that they can't run around with just underwear on. He was a little annoyed with me. I told him he was lucky I agreed to the silly theme. 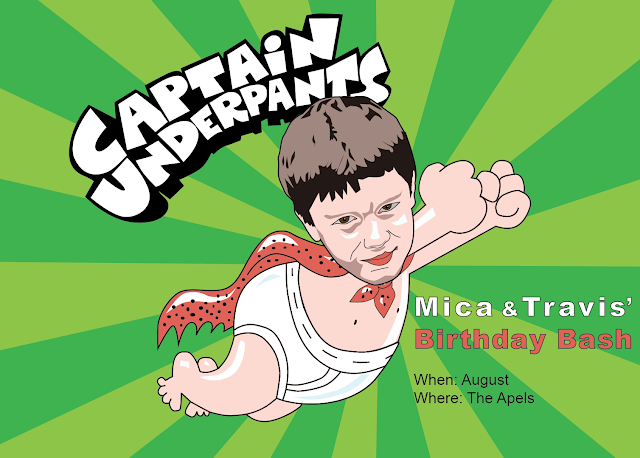 We are doing my boys joint party next weekend (I love that mine both have August birthdays), but we are doing Teenage Mutant Ninja Turtles. It wasn't easy getting them to agree on a theme this year for some reason and I think it's only going to get harder.

You did a great job as always Alissa... Very Cute!

I love the invites! I think you are such a cool mommy running with the theme too!

Real cute! I hope they have a whale of a time at the party.

that is HILARIOUS :)
love it