What the Teacher Said 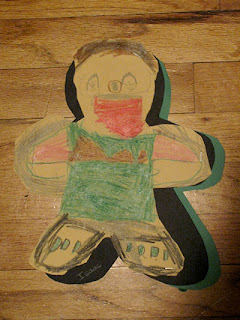 Email 1: Well I emailed Isaak's teacher with my concerns. I told her that I just really wanted her to be aware of the situation of kids laughing at Isaak's drawing. Then I told her about one kid in particular who Isaak's had problems with. He teases Isaak about "having a girlfriend", and a few things have happened with him. I just asked her to please watch out for their behavior together.

Email Reply: She wrote me back a little confused as to what drawing I was talking about. Then mentioned that with the one kid things would get taken care of.

She said that Isaak follows one girl around everywhere. He will only play with her at recess. When she's busy playing with someone else, he plays by himself.

Email 2: I emailed her again with the picture above attached, so there would be less confusion.

I also mentioned that I was aware of Isaak playing with one girl all the time. I had him go to a boy's birthday party, so he'd hopefully bond with some of the boys there. Nope! Then I mentioned that I that I'd try and have some boys over to play.

Email Reply 2: It turns out that all the kids were laughing about the self portraits. Even the teacher held up hers, and they laughed.

As for the boy that's been teasing Isaak? His parents were talked to after class.

My conversation with Isaak: I told him that we're inviting a boy friend over this weekend. He said, "Will Maddi come to?" I said, "No. Not this time." We walked to the Y together, and Isaak said, "Hey look Mom I'm going to pick you flowers like I do for Maddi." 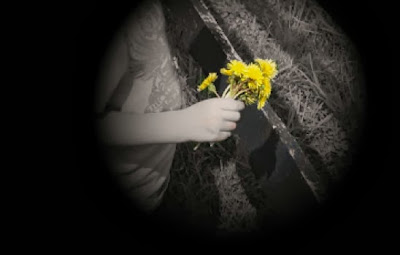 In my opinion it's ok for boys and girls to be friends with the same sex, or opposite sex.

Questions for you readers:

Do I discourage Isaak on being friends with this sweet girl?

She is nice. Daddy met her Dad. He's nice to. Then she has a brother in Mica's grade, which is great. Their family stays after school often just like our family does to play on the playground. It's just that I want Isaak to be open to the idea of playing with others. I've told him for awhile now that it's good to just jump in, and start playing with other kids. It sounds like he has puppy love for this girl.

Given that I come from a completely different value system based on the 1950's, I doubt my advice has much relevance. But, having raised a son, I'd say this. There's no harm in his having a girl for a friend, but he has to fit into male society at school or he is in a for a long and unhappy tenure in the public education system. It seems to me that everything you are doing is right. Maybe it is just a phase.

My BFF in elementary school was a boy. I was kind of a tomboy myself, so it makes sense I think. We had such excellent adventures together! He taught me a love for Star Wars and Scooby Doo, and I taught him a love for animals. We are still facebook friends, all these years later. He's married and has one child himself. I don't think there's anything wrong with boy/girl friendships!

I agree with you - I think it's perfectly fine for boys & girls to be friends. When I was a kid, the girls played with the girls and the boys played with the boys, but since I've had my own kids and volunteer in the schools - it's not like that anymore. All the kids are mixed and boys seems to play with girls regularly. I love that.

I see nothing wrong with him wanting to be friends with just the one girl. Sometimes we just bond with another human like that. It doesn't have to be a "crush" thing. There is a boy who comes to Mariah's bday every year. They are in high school now, and every time I see him, he is surrounded by girls. I'm not sure he has male friends, but he seems very happy, and not in that "I'm a pimp daddy, I got all the girls" kind of way. I think he just prefers having girls as friends. While I think it's good to encourage him to branch out and make new friends, I think eventually, he's going to have to be the one to chose who he wants to spend his time with.

I think it's perfectly fine for him to have her as a friend. I bet he'll start opening up to more friends lately, but maybe she makes him feel safe because she is so nice. :)

i think you should let them keep being friends, but point out that he needs to have more friends...

I think it's fine to have her as a friend too.. it's not fair to give up on this friendship just because she's a girl. The issue I feel isn't that he is getting close to this girl, but maybe that he's not opening up to other friends, boys or girls.

It will probably take time and I hope it works out for your sweet boy. How lovely to bring you flowers :)

I think it is very fine that Isaak has a little girl for a friend. I also think you are doing right by inviting boys over to play.

Isaak sounds like such a sweetheart and is probably going to get his heart broken by Maddie.