Lost Civilizations: 10 Societies that Vanished Without a Trace Review

Disclosure: I got this product as part of an advertorial.

I like mystery and history. The book Lost Civilizations: 10 Societies that Vanished Without a Trace By: Michael Rank is fascinating to me. 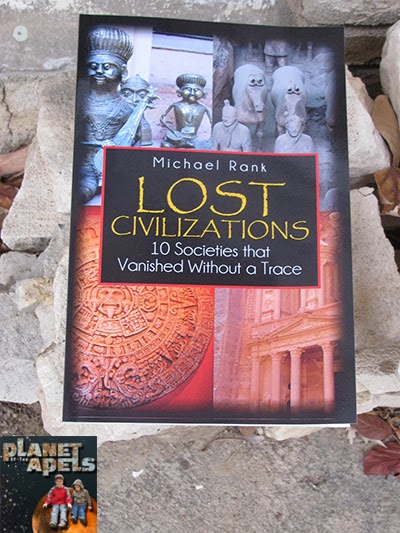 Where to Purchase the Book:

You can purchase the book on Amazon by getting a paperback for $7.19, or Kindle for $2.99. I'm still old school with books, and prefer a hard copy.

Who is This For:

Anyone that is into in history. I really enjoy art history. Lost art really is interesting to me. I know Daddy and Grandpa will really get into this book. I wanted to make sure I read it first to review it. Grandpa is glued to the History Channel much of the time.

Lost Civilizations 10 Societies That Vanished Without a Trace Description on the Back of the Book:

From the #1 bestselling author of History's Greatest Generals comes an exciting new book on the greatest societies in history that vanished without a trace, and why their disappearance still haunts us today.

Whether it is Plato's lost city of Atlantis, a technological advanced utopia that sank into the ocean "in a single day and night of misfortune"; the colony of Roanoke, whose early American settlers were swallowed up in the wild forest lands of the unexplored continent, or the Ancient American Explorers, who managed to arrive to the New World 2,000 years before Columbus, the disappearance of these societies is as cryptic as it is implausible.

This book will look at cultures of the 10 greatest lost civilizations in history. Some were millenia ahead their neighbors, such as the Indus Valley Civilization, which had better city planning in 3,000 B.C. than any European capital in the 18th century. Others left behind baffling mysteries, such as the Ancient Pueblo Peoples (formerly known as the Anasazi), whose cliff-dwelling houses were so inaccessible that every member of society would have to be an expert-level rock climber.

It will also at explanations as to how massive societies that lasted for centuries can disappear without a trace. Did the builders of the pyramids handy craftsmen whose method of transporting massive stones are still unexplainable simply disappear or were they part of an advanced alien race, as conspiracy theorists assert? Was the Kingdom of Aksum really the keeper of the Ark of the Covenant, and did this lead to their downfall?

Whatever the nature of their disappearance, these lost civilizations offer many lessons for us today -- even the greatest of societies can disappear, and that includes us.

Table of Contents:
My Thoughts on Lost Civilizations 10 Societies That Vanished Without a Trace:

It's an easy read. I like that it's not too long. It's 97 pages. For some reason after having kids I just have trouble reading long books. I guess I just have a lot going on in my life. This book was the perfect length.

I took many years of Art History. To be truthful I found most of it to be boring. Slide after slide with monotonous talking didn't interest me when I was a young college student. Then when I moved to Savannah, Georgia for a few years I was hooked with history. They have so much history there. I think I just needed to live in a spot that was filled with it, to be into it.

I loved the chapters on The Pyramid Builders and The Nabataeans. I just find it fascinating that pyramids could be built so long ago. They didn't have much of the equipment that we do today. There was/is so much detail in pyramids. It crazy that some still stand today. The Nabataeans were interesting to me because I'm an Indiana Jones lover.

What about you? Do you get interested in history?

I received one or more of the products mentioned above for free using Tomoson.com. Regardless, I only recommend products or services I use personally and believe will be good for my readers.
Posted by An Apel a Day at 10:08 AM

This sounds so fascinating!

I love stuff like this. I find it so fascinating. I would actually rather watch a tv show about it, but the book does sound really good, too.

This would be something Marc would get into reading...

I used to know a lady who would spend a fortune on these kinds of books! While it's not my typical read, it does sound interesting!

The older I get the more interested in history I get