I Don't Want to Hold Your Hand

This last weekend the boys were not getting along. Isaak pretty much begs for Mica's attention. Mica won't give him the time of day.

At home Isaak was trying to show Mica a Lego construction he built. After Isaak begged Mica a few times, Mica finally came in the room. He took one look at what Isaak was proud of and said, "That's not a big deal." and walked away. I call for Mica to come to me. Then I made him sit in time out, write an apology letter to Isaak, and he had to play with him. I know siblings fight, but this is a common happening.

Mica's lack there of, of caring, carries over to other things as well. He's popular in school, so he must care there. We've observed that he lets doors go instead of holding them open for people. I would blame it on age, but Mica's generally careless about others, and Isaak's the opposite. Isaak's too sensitive.

Isaak once made Mica a card, and then Isaak handed it to me saying, "Mica doesn't want this. Will you take this?"

I'd like for Mica to at least pretend to be thankful, and not hurtful. I know kids are honest. Instilling in him that you shouldn't be so honest that you hurt others is important to.

Isaak's not perfect all the time either. He likes to push people's buttons. He whines to try and get attention. Gee I wonder why he does that?

Isaak's been having nightmares where Mica can't see him, or hear him. Then he wakes up and sees lights, and hears odd noises. I feel bad for the little guy.

Later that day in the car the boys were fighting. When we got out, I made them hold hands. 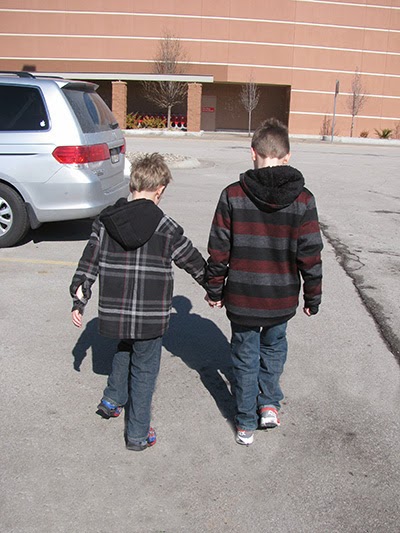 I'm seriously thinking of getting one of those big adult shirts for them to wear as one, and make them do chores together that way.

One good bonding thing that I've gotten Mica to do is read books to Isaak before bed time.

Our boys have similar interests, but such different personalities. Isaak's more me. Mica's more Daddy. They both have my warped sense of humor.

If you have kids, are they very different from one another, or very similar?
Posted by An Apel a Day at 3:10 PM

Mine disagree too. I think it's normal at any rate. :-)

Making your boys hold hands after a fight was a great idea! I might have to do that with my kids. It is amazing how different and unique our children can be. All five of my kids are very different from each other. Have a great day!

Oh, Alissa! My daughters are as different as night & day. I always say that and then I say 'I don't which one is night or day, tho.'

I love the holding hands photo & that you got a photo of it.

My dd were always fighting. When I would catch them fighting, I would stop the fight, make them both sit on the same sofa but at each end for double time out time. Man, my older one HATED sitting there for say 22 minutes when she was 11. That was sheer torture. Once they were fighting and in order to not appear to be fighting they came to me and had their issues in front of me. Then my older piped up and said, "but I am right, huh, Mom because I am the 'GOOD ONE', HUH?"

Oh my gosh, Alissa, I lost it on that and still set them in time out when I controlled the laughter.

Cool that your husband makes jewelry. Esty? no?

I wonder if Mica would stick up for Isaak if someone else was picking on him. I know most brothers and sisters do that.

I get it -my two are the exact same way. Although, my older one will give the little one attention if it's something HE wants to do and needs someone to do it with.

Mine go back and forth like that all the time. Thankfully the older one is now starting to see how insensitive she can be towards the little one is is at least pretending to care every now and again. So, I guess it does get easier the older they get.

I have two boys who are now 15 and 14. I thought they'd NEVER get along. Finally, about a year and a half ago, they started showing interest in caring about each other and helping each other. They still have their squabbles but it's nowhere near what it used to be. Just keep encouraging positive behavior between the two.

i am so glad you made them hold hands...
i think as they get older they will grow closer...