We had conferences for Mica last night.

We just set the boys up with the portable DVD player, while we go to conferences. I remember conferences being a big deal when I was a kid because we had a babysitter.

This is how it went:

Mica's teacher: "You guys have such a great boy! You should just be so proud. Thank you for working with him. I enjoy him so much."

I talked to her about him slowing down to do things. He tends to race through stuff at home. It wasn't a concern of hers. I also talked to her about the fact that Mica's super literal. He wanted to make real rocket shoes instead of color them. He wants me to go all out for birthday parties because he knows I can do *anything on the computer. She thinks any little kid is like that. Possibly so.

I asked her if she was worried about Mica getting bored in school? She said that thought has crossed her mind, but if he'd not saying that he's bored, then he's fine.

I asked if he gets along with the other kids? She said, "Yes Mica's very liked here."

When I was in school I got special help for being S L O W. My mom cried because I struggled so much. I had to stay inside for recess to get extra help. They thought about holding me back. They did hold Daddy back. I think we got lucky with our kids! Isaak seems to be doing well, but he's still a little young to tell. We have Isaak's conferences tonight.

We rushed home, and ate. Then Mica had testing for ju jitsu. He tested for his last yellow stripe. One more testing, and he gets his yellow belt. Again in ju jitsu there's a lot of testing before you get your next belt. I'll show more pictures for my next WW. 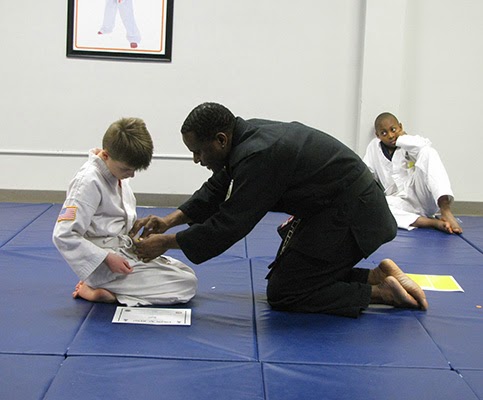 Mica had to do his rolls again, he did his strikes, he got out of wrist holds, he showed how to fall properly, and he showed how to get out of someone holding a knife at you. He was also asked a few questions about why they do certain things.

This is the defense for the knife attack:

We have conferences tonight and I HATE going to them. I drive all the way to the school just for them to say, "Your kid is doing fine. Thanks for coming in!" I always leave thinking wtf did I drive all the way over here for if I was only going to be in there for 15 seconds? I tried getting a phone conference for tonight, but she still scheduled me to come in. The bright side is, this is the last one I will ever have to attend, since we don't have them in middle school!

I like that that ask questions about the theory instead of just focusing on the skills. My hubby is going to get tested soon for his akido lessons eeks!

It's wonderful that the boys are doing well in school. Ours usually last for about 10 - 15 mins and I also have to probe to get more out of the teachers :P

I take krav maga and we learn knife defenses totally differently. We pounce and take the attacker off guard from the front.

I hated conferences; particularly with the teachers who couldn't handle having a student asking questions, etc...

So glad to know your boys are doing well in school. You raised them well, A!
Have a wonderful weekend!

Your son looks very serious about his form, and the demonstration was perfect!

Congrats on a good conference. We got a note that we don't have to come in for Spring conf. unless we want to because little man's doing so well (hurrah, that's great to hear, considering we kept him back). :)

My daughter's teachers and I keep in touch regularly, and conferences are long over. Hurrah. :)

broxtons karate class is working on self defense right now ;)