Mica had his last camp right when we got back from vacation. 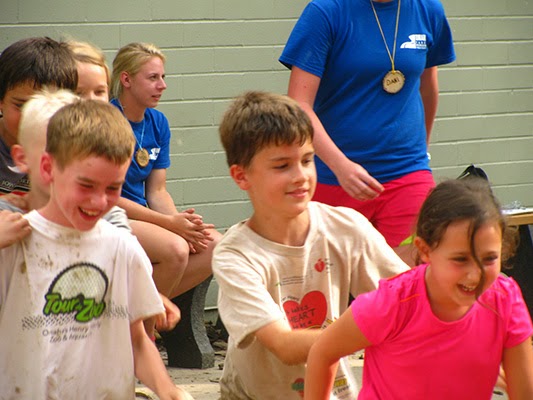 He got just as dirty, and just as tired as the camp he went to before vacation. He had no rash this time around. :)

He enjoyed the fact that he got to ride to camp with his cousin Evan. They weren't in the same group. Evan is a year older than Mica in school. They talked to each other about Legos and Indiana Jones. Mica even rushed home one day to quickly draw a diagram of a Lego car he wanted to design to show Evan. Evan sent Mica a letter in the mail talking about Legos. I think it was good for those 2 to bond once again. They used to be with each other 4 or 5 days a week when they were babies; all the way through preschool years.

My co-worker told me that her daughter was in camp with Mica. I asked Mica about her, and he said, "Who?" I said, "The girl with the eye patch." He said, "Oh ya. I know who she is." I knew she had gotten bit by a mosquito, her eye had swollen shut, and her dad bought her an eye patch to wear for a day.

When we went to see Mica on the last day, we stopped in to see them give out their awards. This time Mica got the Nature Award. I found it funny because I have to force him to go out to play at home. Isaak's more our nature kid. Anyhow he got it because he knew so much about the camp for it being his 2nd time. He also found a snail on the first day and named him Turbo.

After the award ceremony my co-worker wasn't around. Her daughter looked all around for her. I said, "She's up with your sister I'm sure. Why don't you come, sit with your councilors? I'll take a picture to give to your mom." She said, "Mica you can come with me." I said, "Your mom will want it to be just you. It's ok I'll get Mica's picture in a minute." I knew fully well she wanted her photo with Mica because she had a crush on him. I played dumb.

Afterwards I said to Mica, "Did you know that girl has a crush on you?" He said, "I know Mom she told me that I was one of her most favorite crushes. Then there was another girl in camp that told the councilors I kissed her. I said, 'No I didn't!' and then she leaned into me. I backed away from her."

I said, "How did that make you feel?"

He said, "Odd I didn't even like them too much. I don't know why that girl said I kissed her!"

So my soon to be 9 year old has girl issues already. It's funny because he wore the same dirt stained clothes all week. I washed them every night. He was dirty, and sweaty when he came home each day. Those 2 girls must like dirty boys. 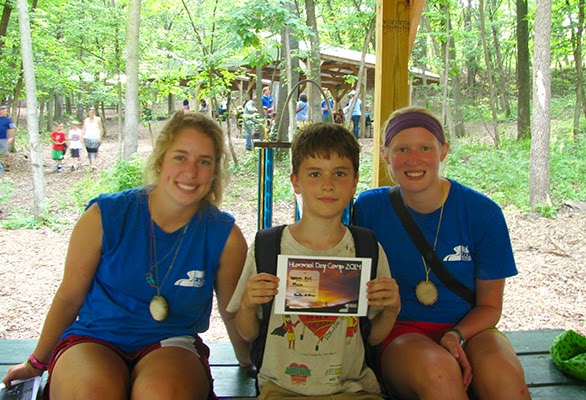 Awe, you should have gotten the picture of the two of them together just for the fun memories when the girl issues started ;)

Congrats on the nature award!

My son had a huge crush on a girl in his class and finally got up the nerve to tell her. She shot him down, hard. Poor guy. Silly girl. ;)

Camp is fun for the kids. Getting dirty is too. :)

How cute. I asked my oldest if he had a girlfriend at some point over the last school year and he just made a gagging motion. I chuckled to myself.

look at that...puppy love :)..My boy who is soon to be 8 is having the same problem as well..and girls can be very spontaneous and aggressive these days :)

You will have your hands full with two boys and raging hormones one day. LOL..