I saw that Gymboree has a whole line of Eric Carle shirts, and pjs right now. I knew Isaak would love to wear one of Eric Carle's designs on his trip to the theater. The trouble is, is that the shirts go up to a size 6. Isaak's 6, but he wears size 7 shirts. Mica's just turned 9, but he wears a size 10, and I'm buying a size 14 for him for next year. Our boys are tall. Every time I look at them it seems as though they grew a little more overnight.

I had some plain t-shirts I bought for a rainy day, and decided to make Isaak a caterpillar shirt myself. I would never sell this due to copyright issues. It's not exactly like Eric Carle's work - I made sure of that. Isaak wanted to wear it today, but his field trip is later this week. I'm having him hold out. He did try it on for a few pictures.


Front of the Shirt: 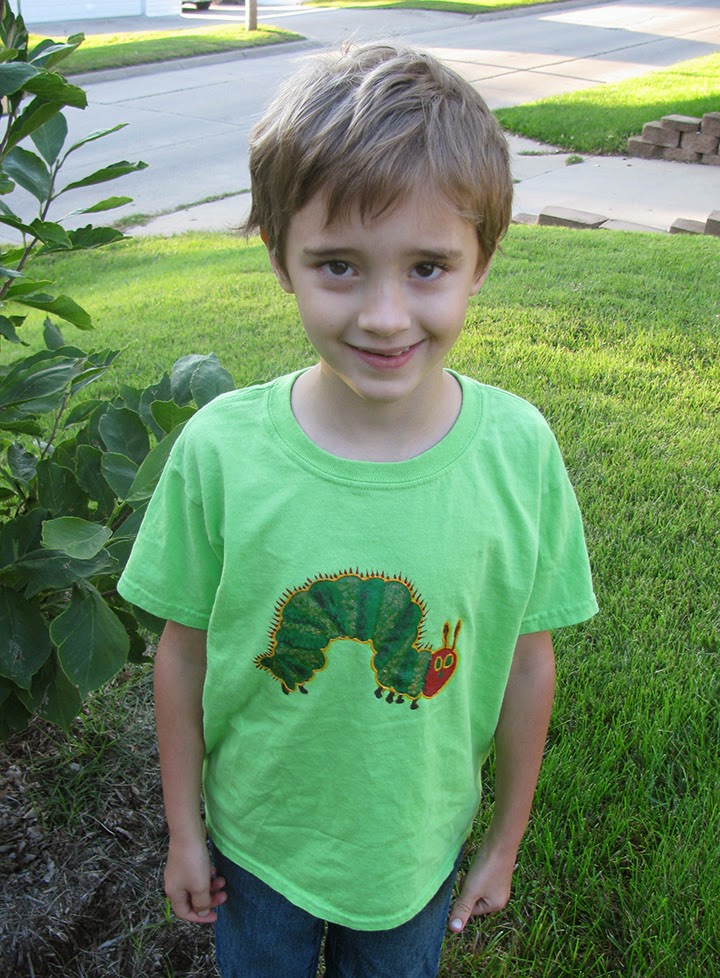 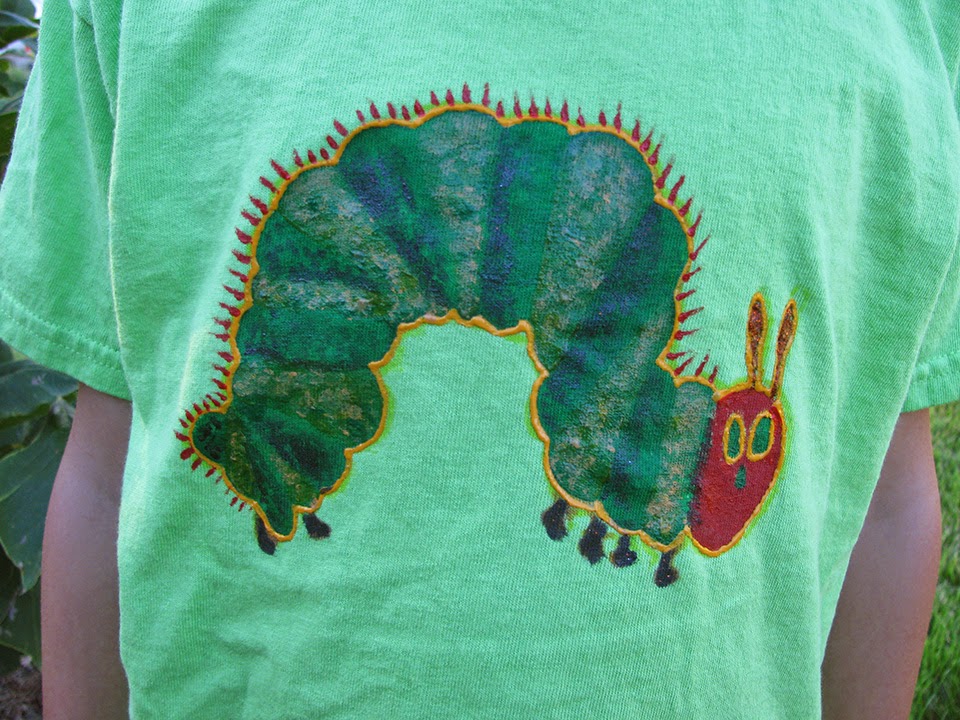 Isaak's shirt has yellow going all the way around. The caterpillar sections are different to. Eric Carle draws with colored pencil different colored lines on the top of his caterpillar. Isaak wanted red lines.

The part I was unhappy with are the caterpillar's feet. I decided to use fabric markers. Man, they bleed! It was the first time I used them.

The back of the shirt: 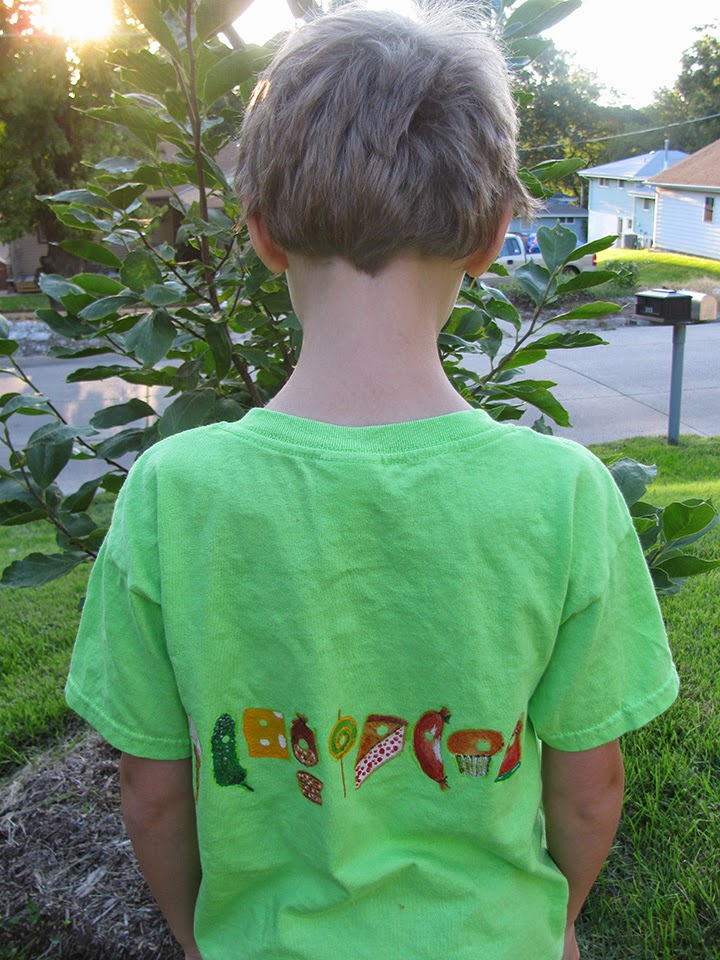 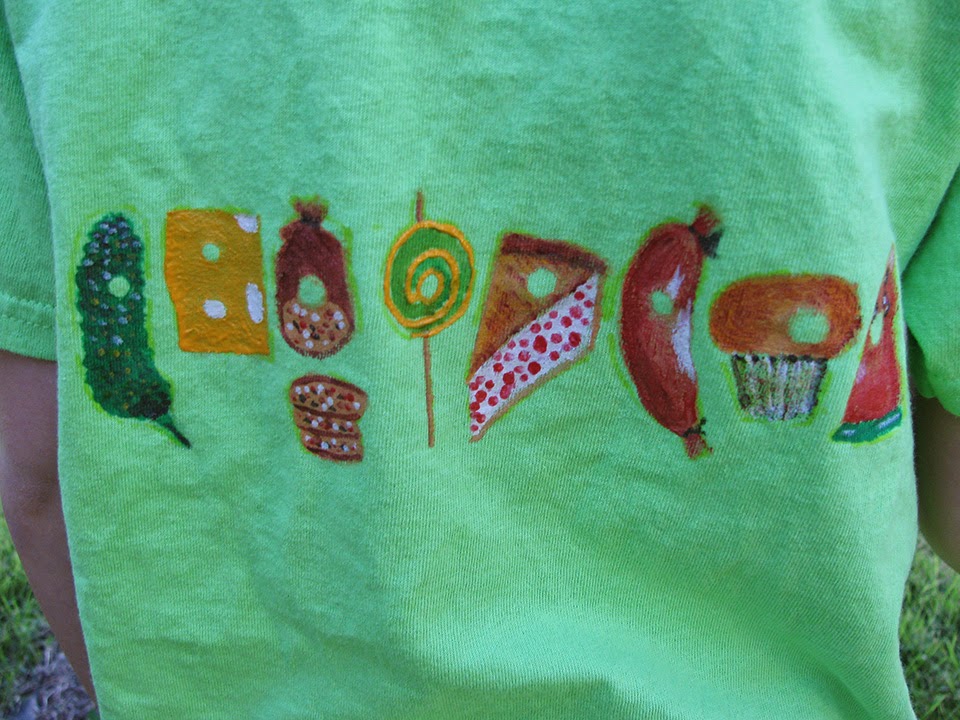 It goes around more than what I captured on camera. There's an ice cream cone, pickle, Swiss cheese sausage, lollypop, pie, more sausage, a muffin, and a slice of watermelon.

This to is different from Eric Carle's work. He has a piece of cake in there somewhere. Isaak doesn't like cake, so I left that out. The lollypop was originally blue and yellow in Eric Carle's image. I didn't have blue, so I made it green and yellow. The pie had blue berries in the original, and I made it a cherry pie.

I'm debating on painting the sliver of fabric up by his neck a color. Like maybe a darker green. What do you think? Should I, or should I leave it be?

The best part of doing the t-shirt is hearing Mica say, "Wow Mom this is cool!" and Isaak saying, "Thank you Mom! I just don't know how you did this."

Just a secondary thing: My post about the Faux Terrarium was featured on Clairejustine's Creative Monday post. YAY!
Posted by An Apel a Day at 8:35 AM

Cool shirt!! I hope he enjoys the field trip!!

I like Eric Carle. And I like the shirt!! I'm sure he loves it, it's more fun even because you made it. :)

Saw this on the Creative Mondays link party. These shirts look great. Diane @ Mrs U Makes.

Adorable. Your colours are perfect.I like it just they way it is.

I love the very hungry caterpillar :) And that shirt is awesome. Great job! I'm sure he'll love wearing it to the play :)

Super cute. My little one used to love that book!

So adorable - and two wins at the end. Go You!

Very cute and he looks like he loves it!

You did a great job! I hate it when they make children's clothes only up to a certain size. I was trying to find a Disney costume for Allison one day and they only came in the smaller sizes. I mean, like, what if a big 6 year old wanted to wear a costume of her favorite princess? She wouldn't get to because they don't think older girls like to wear them. Hmph!

Oh my gosh I love it! You did an awesome job!

Wow, that is super cute and you are very artistic! I love these how you did it posts so I can make things for my kids. I have an original hungry catepillar book signed by Eric Carle....trying to keep in one piece but they kids really like being destructive :)

What a great and cute shirt! I bet he can't wait to wear it and show it off on the field trip. I'm sure it will make the event even more memorable. Nice job.

You did a wonderful job on that shirt. I thought you bought it until I read your post.

That is such a cool shirt! I love it!

I still think that this is just so cool.... Awesome job on it :)